Written by Jo Crowley on 29. Aug 2022
Photographs by Marina Mayorova, Lars Moeller Jensen, Tamara Kulumbegashvili
Share
Day 3 of the Cadet World Championships in Sarajevo was a very special day. Something happened that could well be the beginning of a change in the trends at the very top end of international judo. Who are the current judo powerhouses? Japan, France, Brazil, Georgia? All accepted. How about India?

Tulika Maan is the highest ranking Indian competitor among seniors, currently, sitting at number 90 on the World Ranking List at +78kg. There is a more positive story at junior level with 6 judoka inside the top 30 in their respective weight categories but only one just scraping into the top 20. 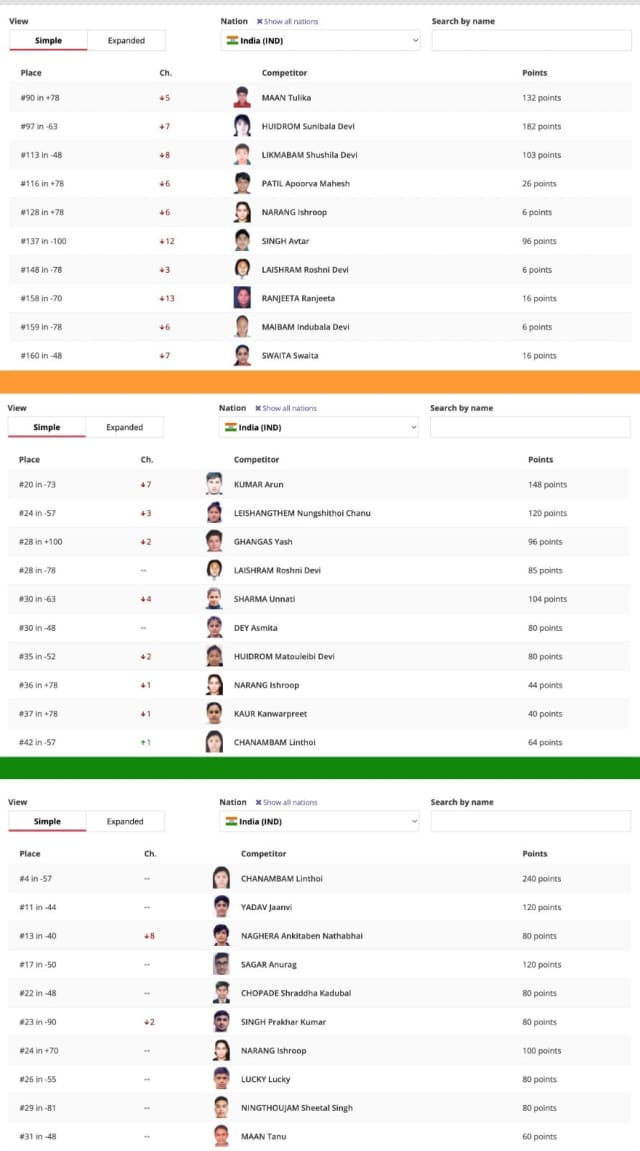 The cadet field is a whole different ball game but it’s only now that the world is sitting up to take notice. To have 9 athletes inside their weight’s top 30, including 4 among the top 20 and one safe in all event seedings at #4, we have to accept the trend. India has a new generation coming and as of August 2022, they have their first ever world champion, their first ever world medallist. It’s not a fluke. Look at the stats, the rankings, the trend. India is a new player and they intend to infiltrate the big leagues from now on. 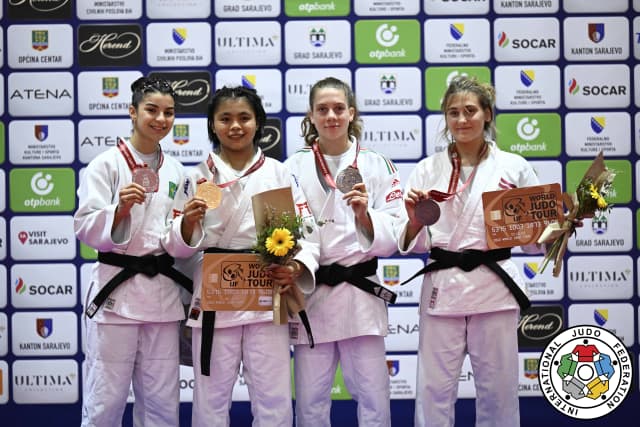 The -57kg rostrum in Sarajevo

Linthoi Chanambam is 16 years old and what she did in Sarajevo is the result of 5 years of planning, hard work, consistency and belief. She fought among the -57kg young women and was seeded 4th behind Alizada (AZE), Stella (ITA) and Russo, also from Italy.

On her way to the final, Chanambam beat a Georgian and then a Bosnian before handling Bulanda (POL) to get into the semi-final. There she faced one of the powerhouses, from France, Emma Melis, but that fight too went to the Indian. 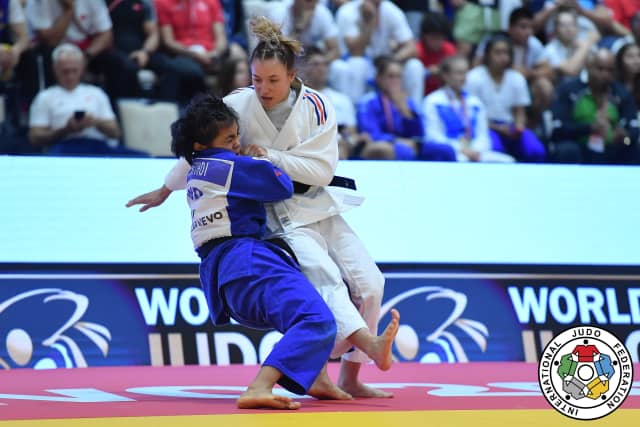 In the final she was up against a Brazilian and it was not easy but grit leant itself to Chanambam and a hard-fought and even harder kept waza-ari catapulted her into the record books. 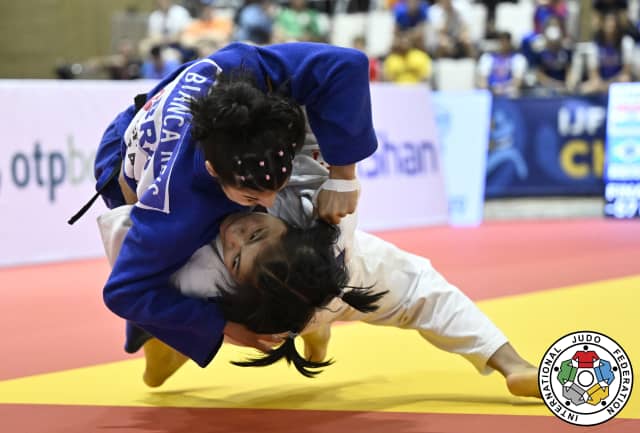 Agility in the final from Chanambam (IND)

“I cannot explain now how I feel. I’m just very happy for this victory.”

From Manipur in northern India, the daughter of fish farmers, Linthoi is now fulfilling a dream she didn’t know she had until relatively recently.

“I’m now in Bangalore for training. My coach is from Georgia and he has been living in India with us for the last 5 years.”

That’s the potted version but the details are important because they show vision and commitment on an unprecedented scale.

Mamuka Kizilashvili was part of the first generation of coaches to access the IJF Academy programme, many years ago now, passing both the level 1 and level 2 courses for instructors. He took what he learned, what he already knew from his own training in Georgia and combined it with his own will to succeed and the financial backing of a wealthy visionary. 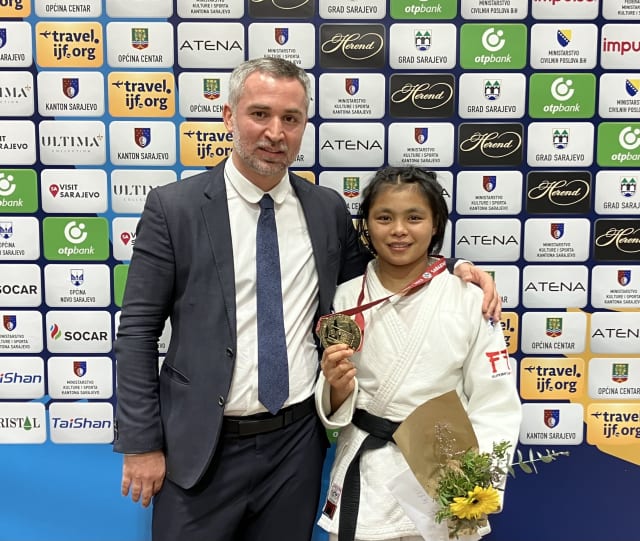 JSW Group is an Indian based conglomerate with roots in steel but branches of business in many sectors all over the world. The company is not solely focussed on business ventures though and 5 years ago JSW invested in a new sports facility in Bangalore, designed to house, train, educate and develop youngsters across 5 sports: judo, boxing, wrestling, football and athletics. The aim is as Jigoro Kano suggested, to seek continuous improvement and contribute.

Mamuka Took on this new coaching role in 2017 and moved to Bangalore in India as a result, “Linthoi was 11 and the youngest of a training group of 40 athletes. The JSW Group and owner give great funding for judo, including providing food, accommodation and education. There is a bubble for all of the judoka to stay there. Since 2017 we were all together, alongside the other 4 sports.

Shushila Devi Likmabam has been known on the circuit for many years and now she is with us too. We recruited judoka from 11-18 years old and now the group is 15-26 and we are still including new ones in the group. We travel around India to events and we visit clubs and when a talented individual is spotted we look to see if the programme would work for them and their families." 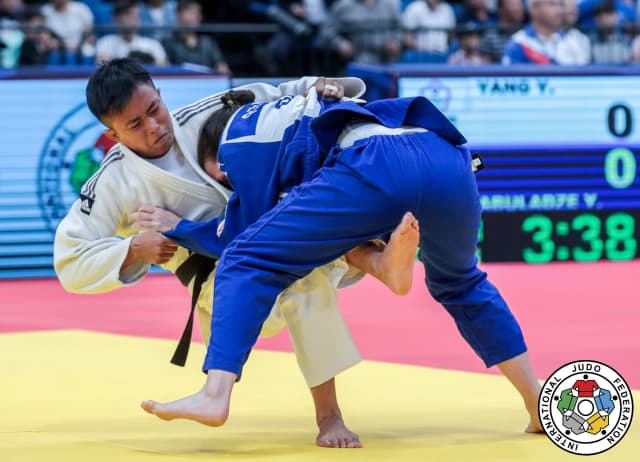 "As for Linthoi, I really had never seen talent like hers and the excitement around her future potential is a big part of what made me stay in India for these 5 years. I really believe she can do it and go on to achieve at the highest level. Now we will take 3 weeks gap for a holiday and some rest and then we will get back to work." 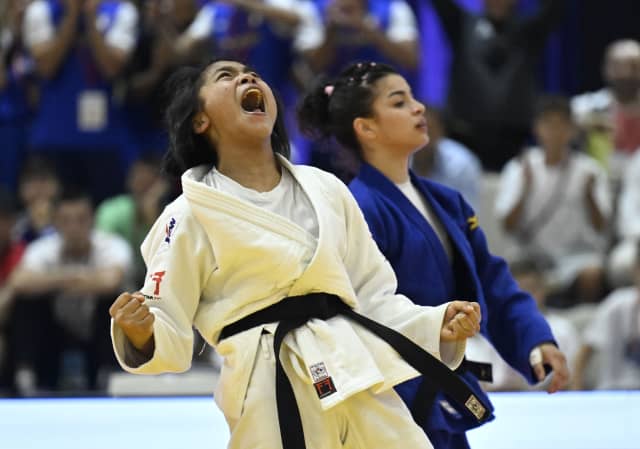 During the corona crisis we found ourselves in Georgia for a month of planned training but we found ourselves stuck there. In the end we stayed for 9 months and trained all the time. She was farming and enjoying my country while also gaining a lot of new judo experiences.”

The programme doesn’t only support the judo team training in India and Georgia, “There was some training in Japan too, before the 2019 cadets worlds. In that group we had a Youth Olympic silver medal from Thangjam Tababi Devi.”

The training continues and the group keeps growing, with a feeling that momentum has now taken hold. The results are starting to cause a fuss among the wider judo community and it is clear that whatever JSW Group, Mamuka and the whole team are doing, it is working!

IJF President Mr Marius Vizer commented, “I want to congratulate India for this fantastic achievement. It's a great result for Linthoi Chanambam, for India and for the world.” 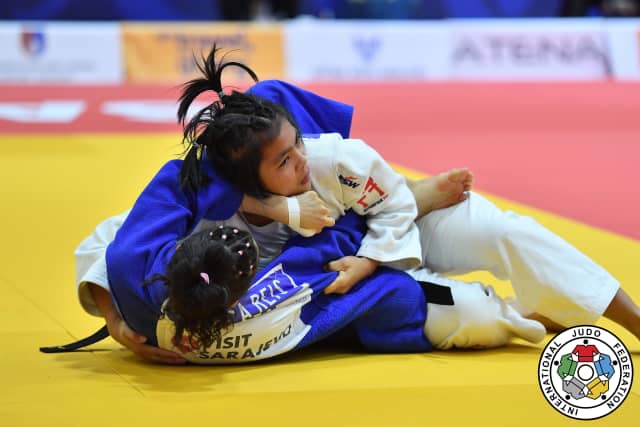 Florin Daniel Lascau, Head Referee Director and key advocate of the IJF Academy programmes said, “Mamuka came to the IJF Academy many years ago and was one of the best students we have had. He was among the first generation and graduated with the level 1 and level 2 qualifications. Still now he feeds back to the Academy team. He was a good student and he has taken what he learned and applied it to his group and situation, becoming a very good coach. From a country with no medals, India now has medals and this is likely to be just the beginning.”

Congratulations to Linthoi, Mamuka, JSW and the whole team in Bangalore. Whatever happens next, we are now ready for the Indian delegation and look forward to seeing their development and growth into the World Judo Tour and beyond.