It's All About Directions

Written by Nicolas Messner, Jo Crowley on 09. Jun 2021
Share
Today we chose to analyse one spectacular picture from the match between Sami CHOUCHI (BEL) and Abdullah ALKHUZAM (KUW), won by the Belgian athlete with a massive o-soto-gari. 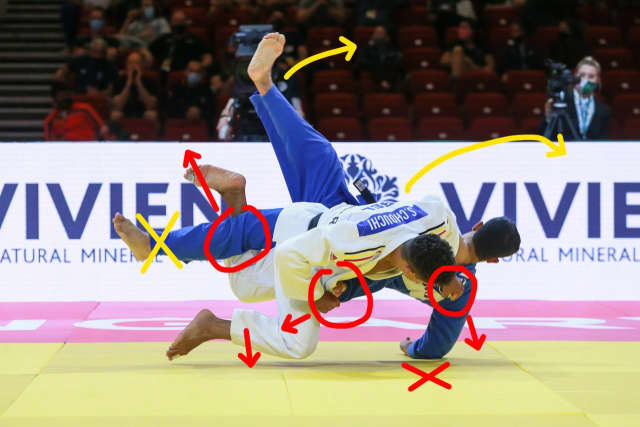 The first impression is that it seems that ALKHUZAM will never be able to escape from the throw and here we discuss why. Firstly, during the preparation phase of the movement, just before the image was taken, CHOUCHI had a strong grip over the head and was pressing down, so ALKHUZAM reacted, putting himself off balance, on his heels. Then CHOUCHI hooked the left leg of his opponent and never released it.

He then took an extra step forward, increasing the distance he could drive, adding power first straight forward and then downwards to throw for ippon. That is exactly the moment our photographer pressed the button.

On the image, we can see that Abdullah ALKHUZAM is totally quartered; pulled in 4 different directions by the powerful, speed-assisted control of tori. CHOUCHI's left leg is hooked and even if it's not in a pure style, it is very effective, as he continues to apply force toward the ceiling. ALKHUZAM can not take is leg out. It is totally blocked. His other foot is already flying in the other direction. The Kuwaiti athlete, desperately tries to escape in the other direction by twisting is body but with one leg blocked, his efforts are useless.

CHOUCHI's left hand, which initiated the first reaction is now pushing down towards the tatami, while the Belgian champion is already clearly looking toward the landing site.

To make sure that his opponent can not escape, CHOUCHI controls his left arm and pulls across his own chest in the other direction, while is whole body is aiming for the final destination.

With all those elements, perfectly controlled by CHOUCHI, ALKHUZAM had no chance to escape or even slightly turn to avoid the ippon. With the momentum created by the Belgian competitor and the different directions he imposed to ALKHUZAM's body segments, the latter was thrown flat on his back.

What is important to understand is that everything happens almost at the same time. It's a sequence, but that takes one second only from the start to the finish. This needs coordination and as easy as it looks, this represents hours of training and uchi-komi. It is usually admitted that to reach the beginning of automatisation, you need to bag 10,000 repetitions (uchi-komi). If you do 200 uchi-komi per judo session, five times a week, during 10 weeks, you reach 10,000, but this is only the beginning.

By automatisation we mean that you can launch the movement automatically without thinking of it, just because you feel that it's the right moment. Training in judo is about creating the conditions to be able to launch movements in all directions, with the aim of scoring ippon. For sure, Sami CHOUCHI repeated this combination thousands of times and today he applied it successfully.