Judo Eyes: Behind the Scenes

Written by Irina Florescu on 09. Jun 2021
Photographs by Emanuele Di Feliciantonio
Share
Enchanted by the beauty and energy of judo, we rarely pay attention to the cameras hovering over athletes or to the mass of equipment placed along the edges of the tatami. At the World Judo Championships Hungary 2021, where the best of the best are gathered together, all eyes are on judoka, offering the mastery of judo, while the glass camera lenses are memorising every contest. All judo championships are captured by a multitude of cameras, the presence of which we don’t even notice, but it is impossible to imagine any competition without them. 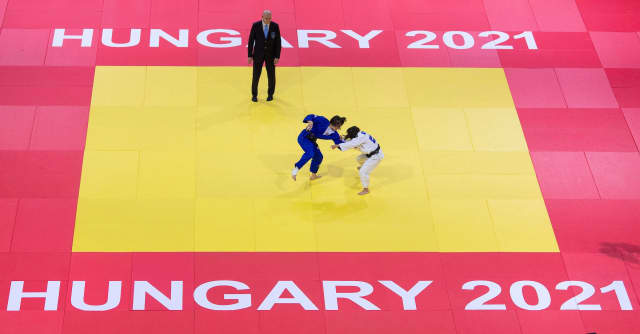 Nothing is hidden from the gaze of the cameras, monitoring every movement of the participants. Often the video from the cameras becomes decisive for the referees who couldn’t quite catch an accidental touch or hidden foul.

Technicians illuminate the contests from every corner of the tatami, broadcasting it on the screens at the arena. They help fans to follow the competition in real time, even from thousands of kilometres away.

It’s a pleasure to watch our beloved sport on the screens as you would watch it in real life, but the organisation and filming is a long and difficult process. The IJF Executive Producer Claudiu Chimoiu explained the details to us, “Preparation starts half a year before the tournament. All this time is needed to inspect the arena, find the necessary equipment and create the camera plan. This plan contains all the technical stuff: the types of cameras needed, the lenses and the storage places for them, the sound system, the TV screens. We make all the elements of the technical part combine correctly and work smoothly.”

Finding the equipment in different countries is also a challenge. Here in Hungary, it was easy, but in some countries less exposed to elite sports events it can be so hard and the equipment can lack the required sophistication, forcing the team to bring the cameras and other devices from abroad. The IJF just can’t fail to meet to the established standard, which is a bar being pushed higher and higher.

“Every filming crew is local. Here, at the World Championships, that team consists of 120 operators. It’s a huge number, but the amount of equipment is relative: 40 video cameras. Judo is the sport with the biggest number of cameras on on site at events, measured in m2. Each contest area of 16x16m is captured by 20 cameras during the final block. This is incredible coverage,” added Chimoiu. 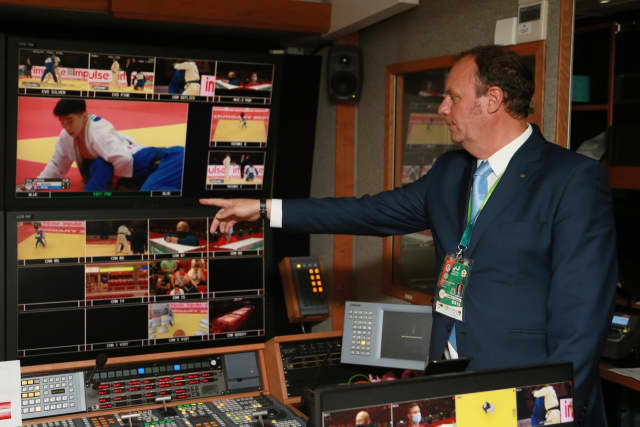 The World Judo Championships Hungary 2021 is pioneering in terms of camera work, in two senses. Firstly, it is the first tournament with an AR graphics (augmented reality) camera. It was challenging to install and calibrate because the techno-crane is flexible and extendable. The team was working on it for 3 extra days, but the results and the acquired experience are awesome. Secondly, the IJF has acquired a camera truck, which spans the entire length of the competition area.

Claudiu said, “Judo is very different and it needs other types of equipment. Here, at this level, we should notice tiny things, like judogi grips or small adjustments in the way the athletes transfer their weight. That's why we have such a variety of equipment: 8 slow-motion cameras, 1 super slow-mo, 3 crane cameras and also one techno-crane, which has a length of 21m. The spectators also like our live videos and they chat with us saying that the filming is very professional.”

The videographer, Laszlo Mate, stands on his feet for the whole day and moves the heavy crane camera for us to have a perfect picture, but he likes his job no matter what. With a joyful smile he shares, “My job is like daily training in the gym, but in the evening I feel relaxed; I’m tired but pleased with the work I did. Maybe it’s a bit hard to control the camera, but working with it is more interesting and dynamic than with another video camera.”

This camera is very expensive, but to work with it is a separate art form. The process is as satisfying as the results. You can see it on the live videos from the event on our website. 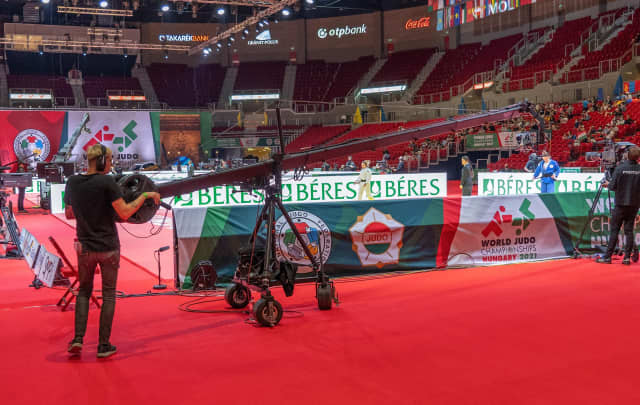 “It is important to have such cameras because the result is unique. This is an action camera and it differs from all others. It combines the technology of a hand-held camera and a camera dolly and can get high or low shots for the best view,” says Laszlo, with enthusiasm.

Whatever we can do for the perfect video to show the power and grace of judo, will be done! A long process is endured for an image to be presented to the viewer, but it's worth it!