Written by Nicolas Messner on 05. May 2021
Photographs by Gabriela Sabau, Emanuele Di Feliciantonio
Share
The first day of the Kazan Grand Slam took place under the best possible conditions, for the first five categories entered into the tournament. While this is the last qualifying grand slam for the Olympic Games, before the World Judo Championships Hungary 2021, many athletes have made the trip to Russia to ensure the final points which could offer them a ticket to Tokyo. For others, this competition is a very good test, in view of the preparation for the next Olympic cycle and this is how we saw new names appearing in the prize list.

Throughout the day, we were able to attend committed and very well contested matches, some first rounds becoming almost individual and personal finals. It must be said that every single point may count when the time to determine who will go to Tokyo arrives. Thus, it was not uncommon to see outbursts of joy that we are used to seeing as we get closer to the medal matches, earlier in the competition. The stakes are high and it is not surprising to see the pressure transform into a release of energy as the rounds go by.

In this context, where each result, as small as it might be, is of paramount importance, we could witness the total control of the Japanese athletes, who prove, if it had to be done, that they are ready for the rendezvous of their lives in just a few weeks, at the Budokan in Tokyo. We also discovered a very productive Russian team, with the advantage of competing at home, but also perfectly focussed and ready to show that the Kazan Grand Slam is their grand slam. Finally, we have seen that although they already know that they will not compete in Tokyo this summer, the French women competing in Kazan continue to reap significant results.

Two-time world champion and silver medallist at the World Judo Masters last January, TONAKI Funa (JPN) was the ultimate favourite of the competition and she proved to be the strongest all the way to the final, where she was up against Irina DOLGOVA (RUS), who surprisingly defeated the 2020 European Champion Shirine BOUKLI (FRA), after a heavily disputed golden score in the semi-final. 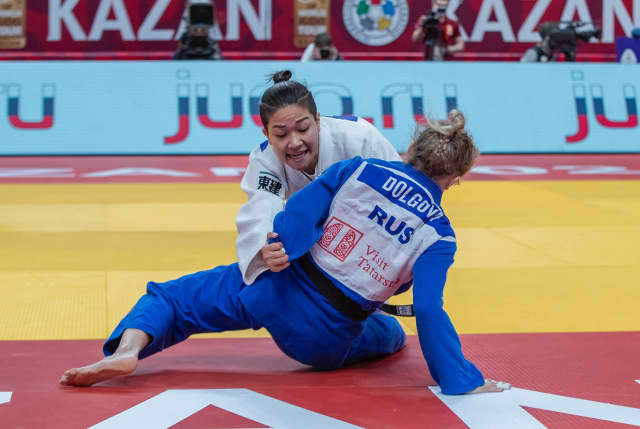 In less than a minute, TONAKI, had scored a waza-ari, which was cancelled, but immediately followed to the floor with an osae-komi for ippon. With this clear and easy victory, the Japanese judoka proves that she'll be one of the favourites of the competition in Tokyo. 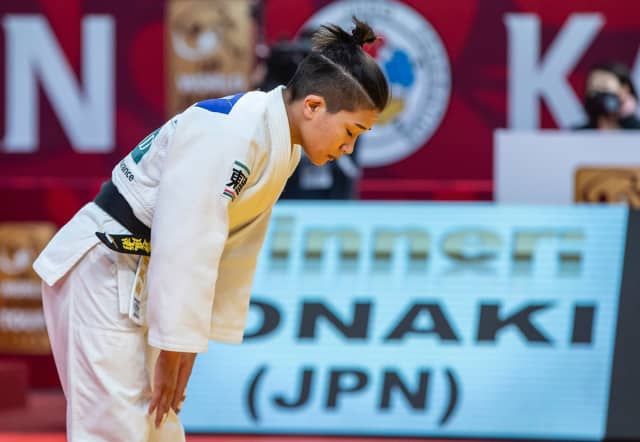 The Frenchwoman was left to aim for the bronze medal but due to an injury collected in the first round, also explaining why she was not on top form, demanded she retire from the tournament. Francesca MILANI (ITA), winner of the Antalya Grand Slam at the beginning of April, concluded the day with a bronze medal.

Only 213th on the World Ranking List, Irena KHUBULOVA (RUS) managed to qualify for the bronze medal match, against the Antalya Grand Slam bronze medallist Shira RISHONY (ISR) and she only needed 16 seconds to score ippon with an uchi-mata to win a well deserved first medal at that level. 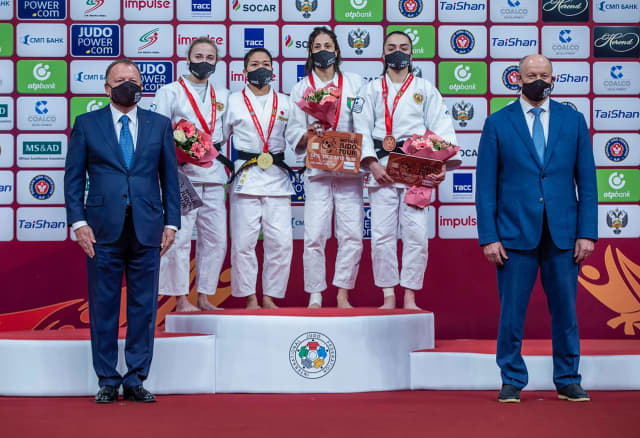 Medal, flowers and prize money were presented by Mr Marius Vizer, President of the International Judo Federation, and Mr Khalil Shaikhutdinov, First Deputy Minister of Sport of the Republic of Tatarstan 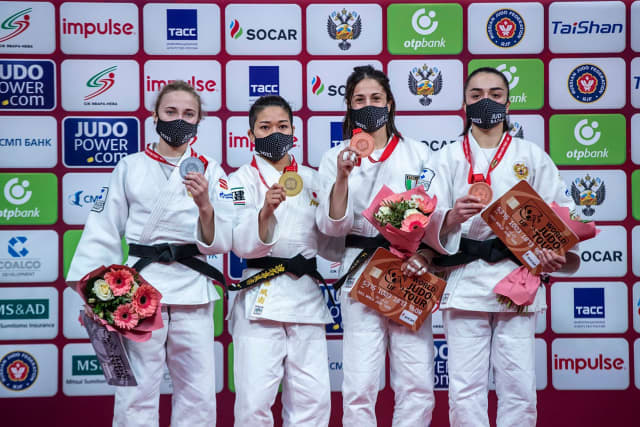 -60kg: World Champion CHKHVIMIANI Wins for Georgia European Champion in 2020, but without result in 2021 so far, Robert MSHVIDOBADZE (RUS) was nevertheless the number one seed and, as we announced during the preview, he had the capacity to bring back a medal for the host country. This is what he guaranteed by reaching the final, where he was opposed by the reigning world champion, Lukhumi CHKHVIMIANI (GEO), who, despite some tough matches, managed to extricate himself from the traps of the preliminary rounds. 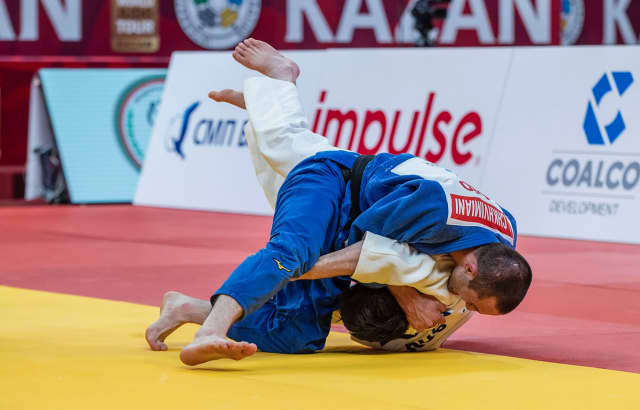 We witnessed a very close final, neither of the two competitors finding the slightest opportunity to score, but both showed great engagement, a superb capacity to escape from tricky situations and they finally entered the golden score with only one shido to MSHVIDOBADZE's name. After a few seconds, CHKHVIMIANI was also penalised. 4 minutes and 19 seconds were needed for CHKHVIMIANI to finally score ippon with an osae-komi-waza, after an incredible series of attacks, counterattacks and escapes and an unbelievable riot of energy. At the end of the bout they showed beautiful respect and sportsmanship to one another. 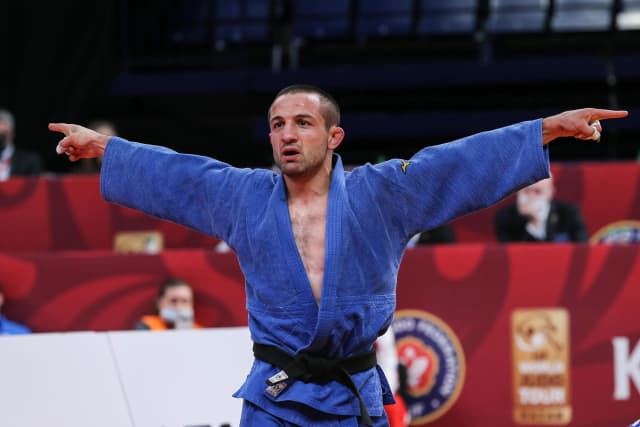 Pointing to a distant 104th place in the world ranking, Ayub BLIEV (RUS) is part of this new generation of competitors for whom a grand slam at home is a magnificent opportunity to shine and he did not fail to do that, qualifying for the bronze medal contests against his compatriot Ramazan ABDULAEV (RUS), also 23 years old. The next generation of Russian athletes is already shaping up to flourish. ABDULAEV finally pinned down his countryman to win the bronze medal.

In the second bronze medal contest, we found the holder of three medals in grand prix, David PULKRABEK (CZE), against Dauren SYUKENOV (KAZ), whose record on the world circuit was still blank before the start of the competition. After four minutes, where nothing was scored and SYUKENOV was only penalised with one shido, it was time for the first golden score of the final block, but it was PULKRABEK's turn to be penalised twice, putting him under pressure, with a third shido, looming, which he received after well into the 8th minute of contest time. Bronze for SYUKENOV! 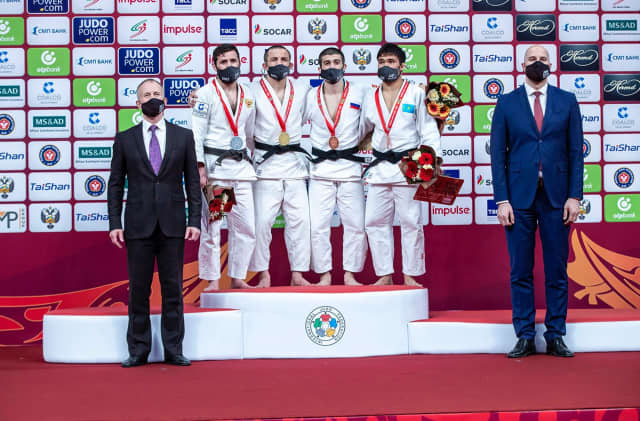 Medal, flowers and prize money were presented by Mr Sergey Soloveychik, Vice President of the International Judo Federation and President of the European Judo Union, and Mr Ranko Tepavcevic, Events Director for the Kazan Grand Slam 2021 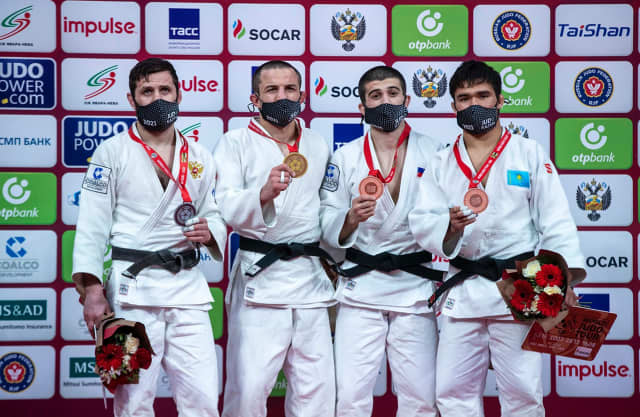 -52kg: Who Can Stop ABE? Who can defeat ABE Uta of Japan? This is the big question that will remain valid until the Tokyo Olympics. For sure, no-one during the preliminary rounds of the Kazan Grand Slam. The Japanese was, without a doubt, in good form. In the final she faced Astride GNETO (FRA), who will replaced in Tokyo, as the undisputed leader of the category in France is world number one Amandine BUCHARD. 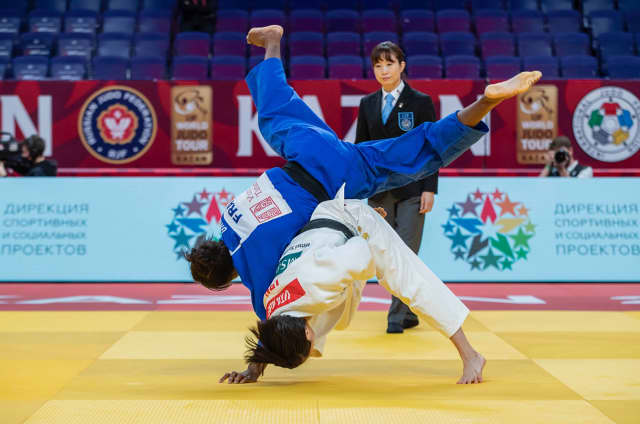 Without any surprise, ABE Uta was the first to action and the Japanese judoka scored a waza-ari with an aerial sode-tsuri-komi-goshi. A few seconds later she concluded on the floor with an immobilisation for an indisputable victory that might announce further victories ahead. 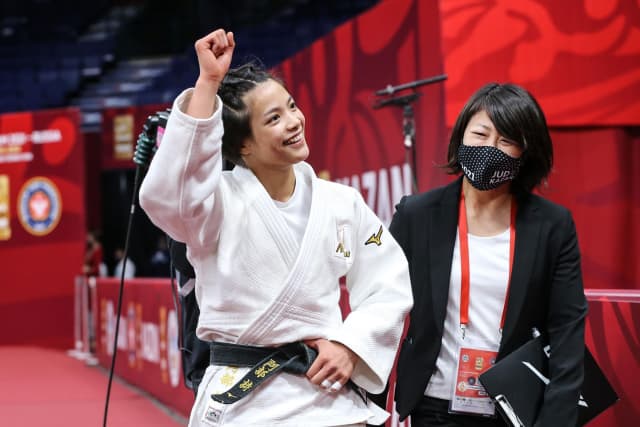 Evelyne TSCHOPP (SUI) is present in final blocks regularly. Once again she offered herself an opportunity to win a medal, against Alesya KUZNETSOVA (RUS), who had no record better than a seventh place in Tel Aviv this season. After a failed ippon-ko-uchi-gake attempt from KUZNETSOVA, TSCHOPP controlled her opponent and followed her to the floor to apply an unstoppable shime-waza for ippon, to win the bronze.

15th in the world, Gefen PRIMO (ISR) won a beautiful and promising bronze medal at the last European Championships. For the second bronze medal contest in Kazan she faced Ana PEREZ BOX (ESP), ranked 12th in the world, who held PRIMO down for 20 seconds for ippon, after a nice piece of work on the floor. 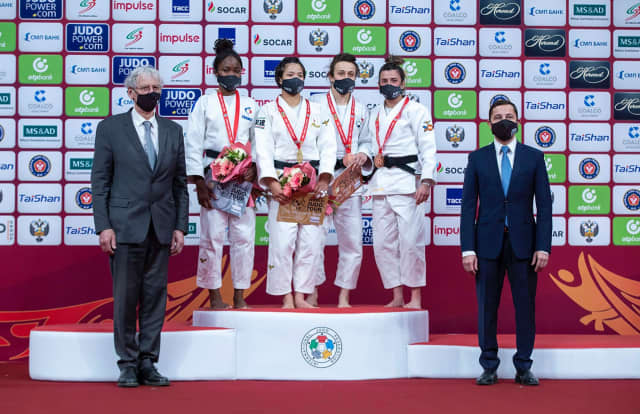 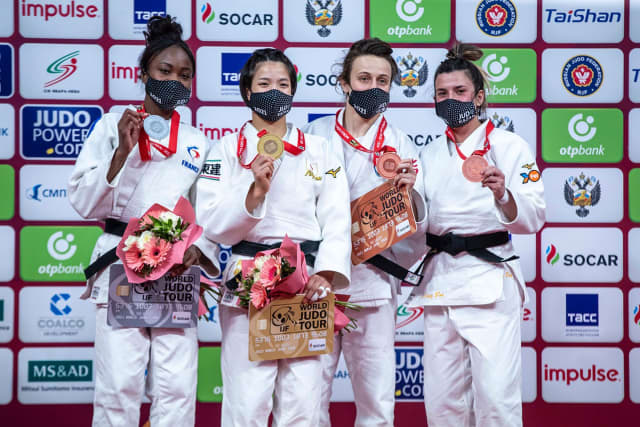 -66kg: CHOPANOV Wins First Gold for Russia The Russian public was hoping for a 100% Russian final, but this was without counting on Dzmitry MINKOU (BLR), who produced a superb performance in the semi-final to eliminate Yakub SHAMILOV (RUS). In the final he faced Murad CHOPANOV (RUS), bronze medallist in Antalya on 1st April. 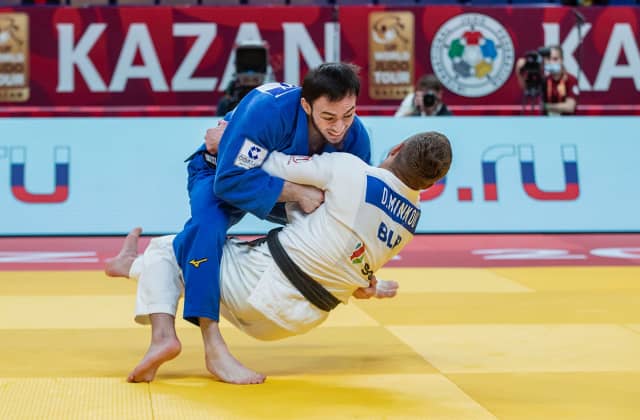 After one minute and a half, CHOPANOV was penalised a first time for passivity and seemed a little bethind in terms of attacks, but the Russian was waiting for the right moment to apply a counterattack for a clear ippon. 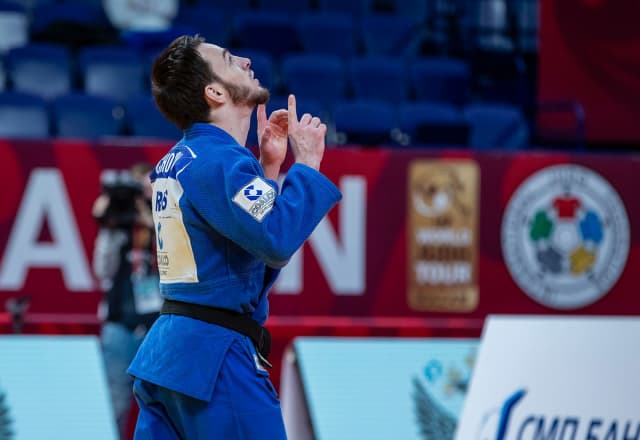 Ranked 81 in the world KUANOV Yesset (KAZ) had only two gold medals at the Aktau Asian Open to his name, before entering the bronze medal contest against Bagrati NINIASHVILI (GEO), fifth in Tbilisi in March. With only eleven seconds remaining and nothing scored, the golden score was fast approaching, until KUANOV scored a waza-ari with a desperate sumi-gaeshi, immediately followed with an immobilisation for ippon to win bronze.

The last bronze medal contest brought us the two Russians, Aram GRIGORYAN (RUS), bronze medallist in Tashkent and Yakub SHAMILOV (RUS), finalist in Budapest in October 2020. The bronze medal went to SHAMILOV after GRIGORYAN tried to escape from a powerful sode-tsuri-komi-goshi using his head, which is forbidden and he was therefore disqualified. 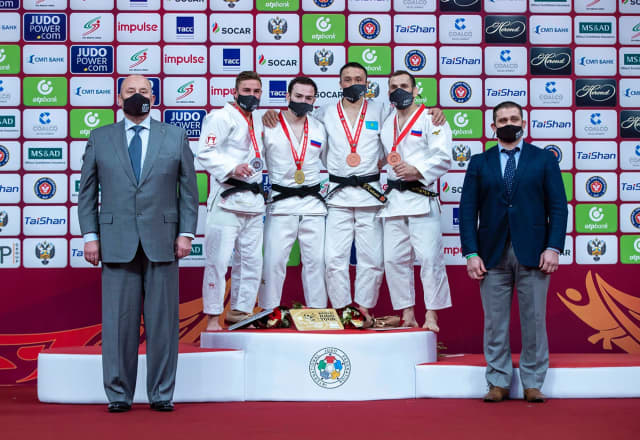 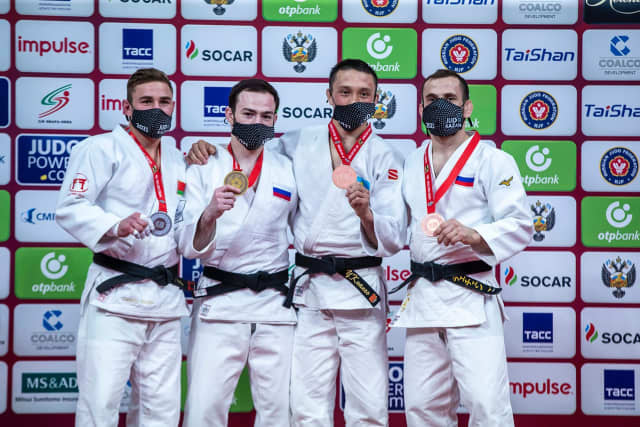 -57kg: RECEVEAUX Controls Everything for Gold Obviously, competing at home had a beneficial effect on Daria MEZHETSKAIA (RUS), seeded number three in the competition and currently in 17th place in the world rankings, since she qualified for the final, where she found the Frenchwoman Hélène RECEVAUX. The latter visibly digested her non-selection for the Olympic Games, the French Federation having preferred Sarah-Léonie CYSIQUE to her. Her entry into the Kazan Grand Slam final is a great illustration of the resilience of which top athletes are capable. 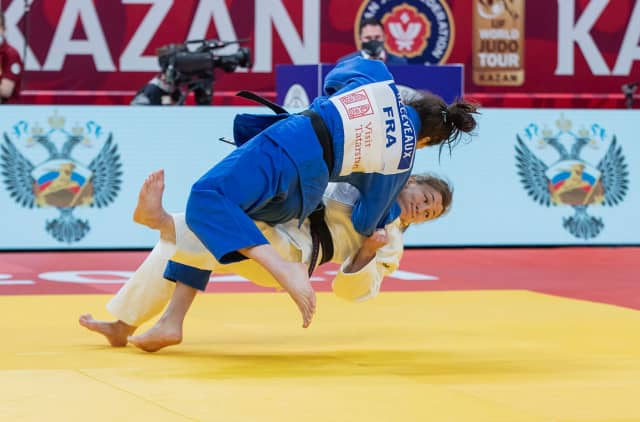 After a well balanced first half of the final, RECEVEAUX took the lead with an o-uchi-gari for waza-ari that was for a moment attributed to MEZHETSKAIA, but logically corrected with the help of the video-refereeing. From there on, the French fighter seemed to be in total control of the match, dominating in standing position as well as on the ground and gaining some precious seconds to conclude the day with a beautiful gold medal around her neck. 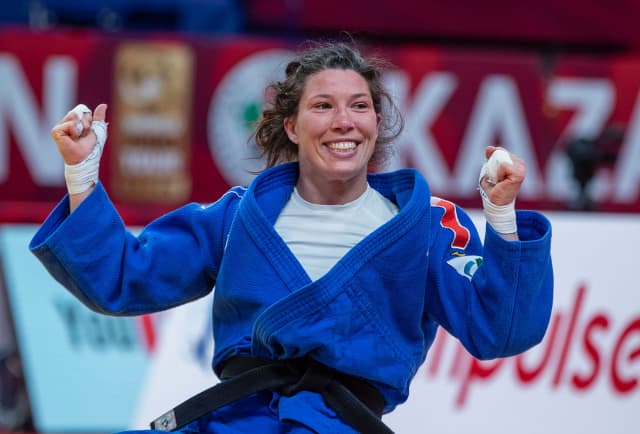 Eliminated by RECEVAUX in the semi-final, Theresa STOLL (GER) found herself facing KIM Jisu (KOR) for the first bronze medal, in order to regain her level of the last Tashkent Grand Slam. The German secured the bronze medal with a waza-ari scored in the first half of the match from a right-handed uchi-mata, that she held until the end.

Russia was very fit in this category and placed a second competitor in the final block, with Yulia KAZARINA (RUS), who was opposed by Serbian Marica PERISIC, third in Tashkent a few weeks ago. PERISIC quickly took the lead with a seoi-nage for waza-ari, that she doubled a little later with a second perfectly executed ippon-seoi-nage. Bronze to PERISIC! 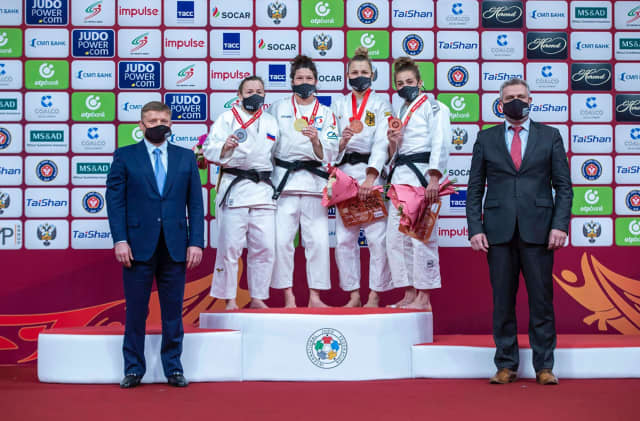 Medal, flowers and prize money were presented by Mr Pavel Nikolaev, President of the Judo Federation of the Republic of Tatarstan, and Mr Nicolas Messner, Director of the Judo for Peace Commission and Director for Media of the International Judo Federation 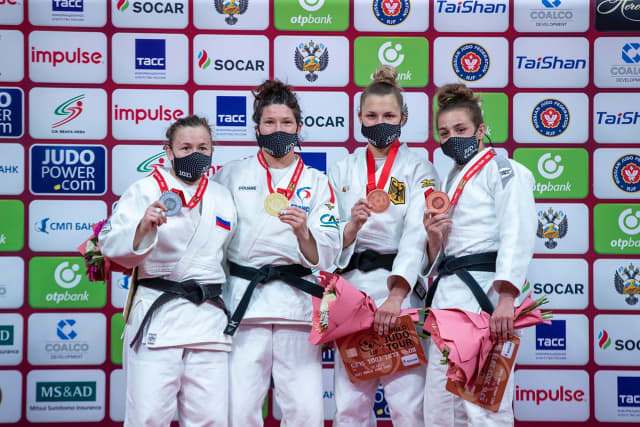