Last day of the individual competition

As this year’s World Championships edge towards a pulsating conclusion on Sunday, the IJF flag was officially presented to the hosts of the next edition in 2021. 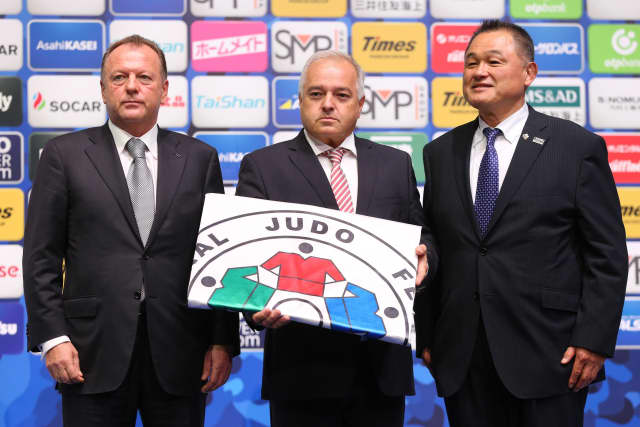 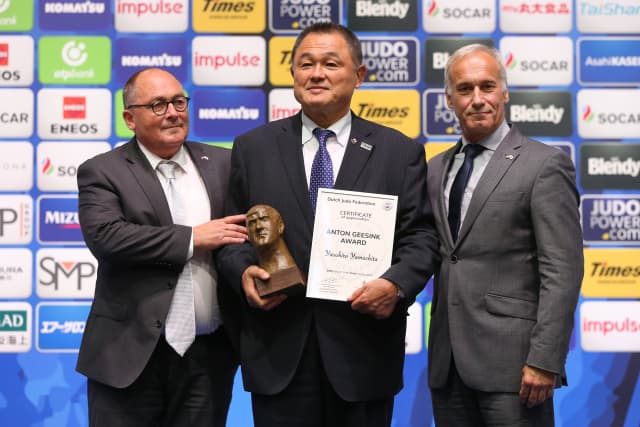 THIEME said: “After you retired you continued as a sensei making big contributions to the sport in Japan and worldwide. You are a pioneer of judo.”

+78kg: Teen SONE keeps the title in Japan as she completes worlds set

World Judo Masters gold medallist SONE Akira (JPN) became the youngest women’s heavyweight world champion of all time as she won the +78kg crown with a narrow victory over the legendary Idalys ORTIZ (CUB). SONE, 19, who was the 2015 Cadet world champion and 2017 Junior world champion, completed her Worlds set by beating her rival ORTIZ for the second time with their head-to-series even at 1-1 before the final. World number one ORTIZ, who was aiming for her third world title, was penalised after four minutes of golden score for going out of the area and was disqualified. The Cuban, 29, who was one of the speakers at the IJF Gender Equity Conference on the eve of the competition along with her coach, was halted by the Japanese but it was SONE and not defending champion ASAHINA who ruled for the hosts and kept the red backpatch in the sport’s homeland. 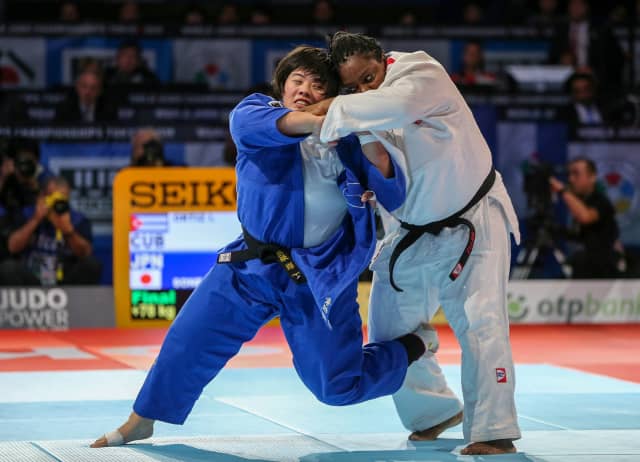 The backpatch was not the only hot commodity that SONE prised away from her older teammate ASAHINA as the latter held the record as the youngest women’s heavyweight champion – which was set last year in Baku at 21 – until today and now it’s ASAHINA who has to chase down her teammate and fellow contender for the sole spot at Tokyo 2020. 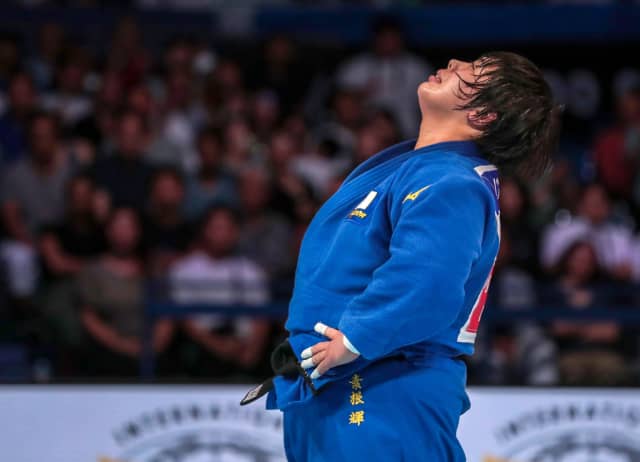 In the first semi-final former European champion Kayra SAYIT (TUR) was quickly defeated by SONE who threw with a tai-otoshi and pinned down her opponent for 10 seconds to rush into the final. The Japanese youngster needed only 27 seconds to book a place in the final at her first attempt.

In the second semi-final ORTIZ extended her perfect head-to-head over world number four Maria Suelen ALTHEMAN (BRA) to 17-0. In golden score the Cuban veteran threw with a low seoi-nage after 31 seconds for a match-winning waza-ari score to guarantee her country their first accolade at Tokyo 2019.

The first bronze medal went to SAYIT after world number nine Beatriz SOUZA (BRA) tapped out when trapped in osaekomi after two seconds. SOUZA appeared to have picked up a knock as she gingerly returned to her feet on numerous occasions but showed her fighting spirit as she continued but ultimately there was only going to be one winner at this point and SAYIT prevailed on the ground to register Turkey on the medal table.

The second bronze medal contest was claimed by 2018 world champion ASAHINA Sarah (JPN) who left it late to defeat ALTHEMAN. Park 24 member ASAHINA, who was urged on by her highly-animated dad Terry ASAHINA who was in the front row, threw for ippon with five seconds left and after leaving the mat she bowed to all four corners of the iconic Budokan. The highly-popular Kodokan product fought back the tears before embracing with her dad and applauding her supporters in one of the most emotional moments of the competition. 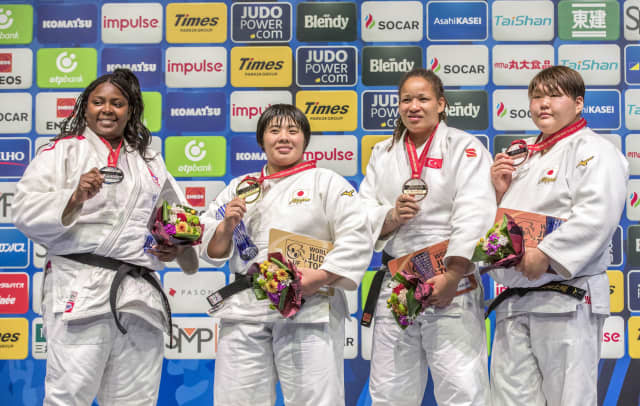 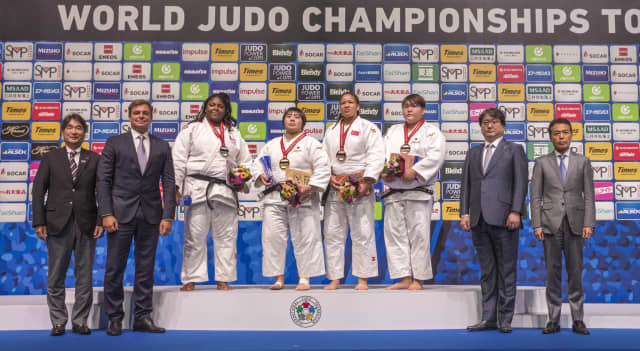 Olympic champion (-100kg) Lukas KRPALEK (CZE) was crowned the new world heavyweight champion after a thrilling last individual contest at the World Championships. Olympic silver medallist HARASAWA Hisayoshi (JPN), the world number four, was spurred on by the highly-charged crowd but it was world number two KRPALEK who had the advantage. In a battle of attrition the 2014 world champion in the weight below secured his legacy as he became the first judoka to win world gold in both the -100kg category and the +100kg category. Four minutes of golden score was required to determine the new champion and it was HARASAWA who was handed the disqualification in the scoreless final after being passive. 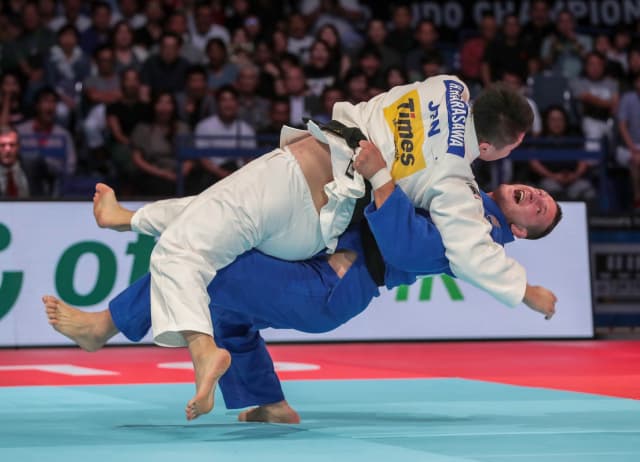 KRPALEK was on top throughout the contest while HARASAWA was hesitant as he just flirted with the idea of attacking and was in and out with teases including his familiar uchi-mata. Japan’s number one heavyweight had experienced issues with his judogi and was eventually told to undo his belt and to fix his judogi to continue and he could not match the workrate of his opponent achieved the result since moving up at the end of 2016 and will be a leading contender next year in the same venue at Tokyo 2020. 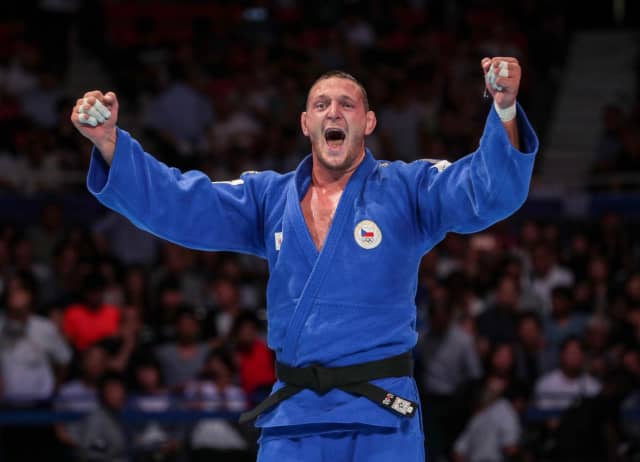 After winning his second world title the Jihlava native went down to his knees and kissed the mat. KRPALEK looked towards the rows and rows of photographers and raised both arms in celebration before opening his judogi and mouth to pose for the media.

In the first semi-final 18-year-old KIM Minjong (KOR) was humbled by KRPALEK who beat the highly-touted teenager in golden score. KRPALEK, who is one of the best judoka on the ground, wrapped up the former Cadet World Championships winner and World Team Championships bronze medallist with a tate-shiho-gatame in added time for 10 seconds and a match-winning waza-ari score.

In the second semi-final defending champion Guram TUSHISHVILI (GEO) lost to HARASAWA in a major upset to guarantee that the red backpatch would change hands. TUSHISHVILI attempted a sode-tsurikomi-goshi to panic the Japanese number one and then tried a sasae as he peppered the home heavyweight with attacks. The Georgian was overzealous, as has been the case before, and was countered by HARASAWA with te-waza for a waza-ari score and the Japanese held down the champion for 10 seconds to win their first meeting and to bring the near capacity crowd to their feet.

In the first bronze medal contest KIM upset double Olympic bronze medallist Rafael SILVA (BRA) with a heroic effort. KIM, who turns 19 on Sunday when he will be a member of his country’s squad for the team event, went the distance with the Brazilian man-mountain who is one of the tallest and most experienced judoka in the +100kg category. The gutsy heavyweight flattened the South American after two and a half minutes of golden score to a big reception from the crowd.

In the second bronze medal contest world number eight Roy MEYER (NED) stunned TUSHISHVILI as he powered the favourite over with a tai-otoshi to clinch his first World Championships medal. Georgia’s heavyweight frontman has a tendency to finish first or fifth and that unwelcome pattern continued today in the penultimate contest on day seven. MEYER savoured every second and played to the crowd as he left the tatami having bolstered the Netherlands’ plentiful medal haul. 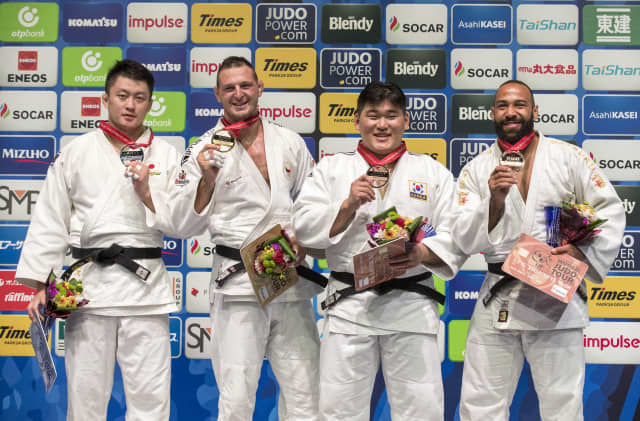 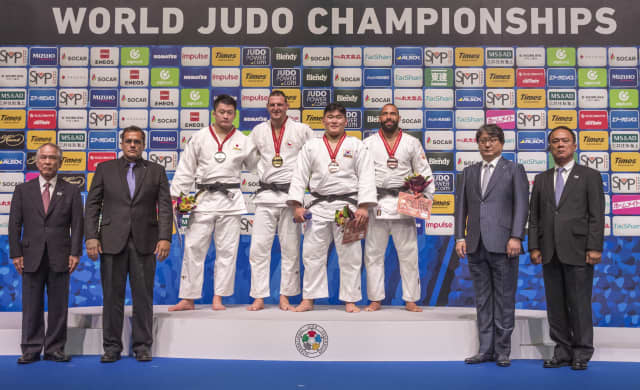 Watch the team competition on Sunday from 1pm Japan time