Matthias Fischer: Lord of the Waves

By Pedro Lasuen, Emanuele Di Feliciantonio on 28. Aug 2019
Share
They are invisible and discreet. Their mission is to offer the best show possible. Their days and hours of work do not count. They are polite, cheerful and share a mutual passion for judo. They are the men and women behind the scenes. 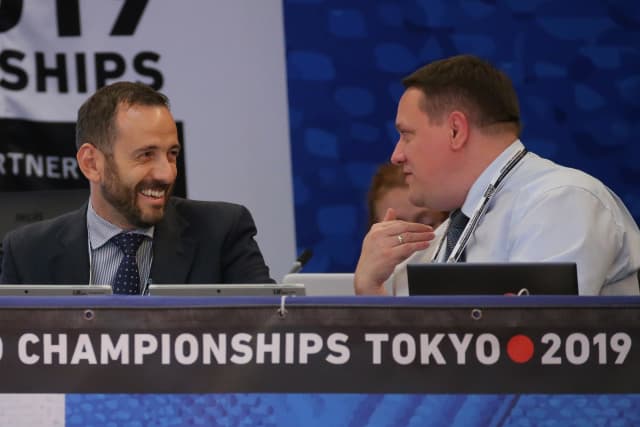 Of all the members of the staff he is the one that occupies the best armchair. His workspace is a platform located on one side of the enclosure. It is surrounded by colleagues, television screens and computers. He is Matthias Fischer, Lord of the Waves.

At first glance, this German, who lives in Mainz, is a quiet guy. The second impression improves the previous one. Matthias is friendly and polite. And after talking with him, we realize that his brain is a prodigious computer.

The turn of the century was a technological revolution in every way. All the companies in the world and all households had to adapt to the changes that were installed in society at a speed of vertigo. The sports organizations too.

Matthias is a computer expert and heads the IT department of the International Judo Federation. Counted like this, the laymen that we are do not understand the dimension of their mission. Without Matthias, there would simply be no internet during judo tournaments, no images, no signal from the satellite to broadcast the competitions.

The German is a judoka, black belt, and has been working for IJF since 2001. We are talking, without disrespecting anyone, of prehistory.

“You can imagine it,” explains Matthias, “at that time our resources were very limited. We had to learn, and learn quickly”.

His department has grown exponentially. “Before we were two, the tireless Elisabetta Fratini and me. We did everything.” Today they are more numerous, but they also have more things to do.

There is the technological dimension, of course, everything related to transmissions and internet connections. However, before the first fight, much earlier, the IT team is already working. Initially, they are responsible for receiving, compiling and organizing the registrations of the delegations. Then, they organize the competition draw. That means many hours of hard work. And there is the event.

Matthias is not one of those who looks at his belly button, but he is especially proud of the Computer Aided Replay system, CARE. He invented it and it has become an essential work tool. It is the system that allows the referee commission to get pictures, slow motions from as many different angles as possible and as many times as necessary.

Matthias is also not a guy with egocentric problems and, while describing his work, points out to his colleagues, those under his responsibility. "All this, he explains, is the fruit of true teamwork." He does not say it lightly. "Look at them, see how they work, they never stop and they are top-level professionals." Matthias quotes them all, Elisabetta, Saso, Ziad, Corina, Simon, Federico, Lance, and everyone else.

But what do his colleagues say about him? They describe him as someone thorough, always on time, precise, calm and unchanging.

A defect? "It is thorough, always on time, precise, calm and unalterable," Elisabetta and Corina say between laughs. The Italian and the Romanian point laughingly at the difference in temperament. "We are Mediterranean, warm-blooded."

Perhaps that is the key to the team's success. It is a well-dressed salad with many ingredients that correspond to the multitude of nationalities, cultural differences, ways of expressing and working. Matthias is the cook and the final dish is exquisite.

One more day of the judo world championships is coming to an end. It is now time to eat and rest before the next day. Up there, on his platform, will be Matthias, the Lord of the Waves.

See also
I AM JUDO
Find out who Sagi Muki really is!