Written by Marina Mayorova, Christian Pierre on 01. Sep 2019
Share
NEVER QUIT. These two words are printed on a T-shirt worn by one of the judokas of the IJF Refugee Team. No comment needed. The message is crystal clear anyway and it perfectly communicates the spirit that judo embodies. 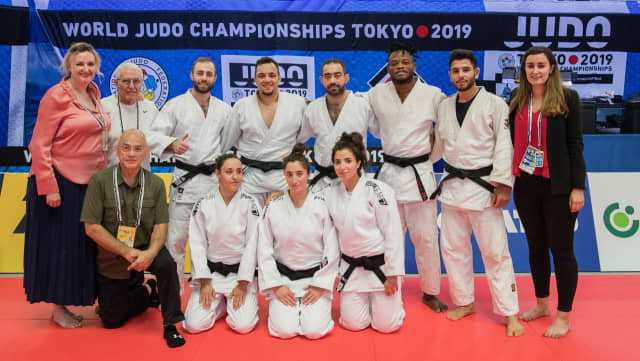 On the last day of the IJF Worlds in Tokyo, another milestone was reached earning its place in the history books of international judo. One of the teams in the mixed team competition consisted of refugees.

IJF Competition Manager Dr. Lisa Allan explained how it was formed. “The refugees have to apply to the IJF to be entered in the IJF Refugee Project we established,” said Dr. Lisa Allan. “We did an analysis of them testing their abilities at other competitions. From the larger group we distilled a core group for this year’s World Championship. Originally it was seven men and three women. The women were all taking part in the Mixed Team Event, the men in both the Individual and Team Events.” The refugees selected for the IJF Refugee Team hail from Afghanistan, Congo, Iran and Syria. Unfortunately the male judoka from Afghanistan got injured and could not make it at all. 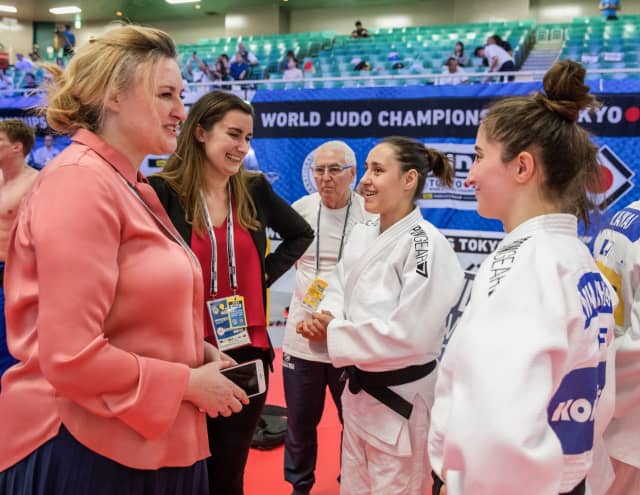 It’s IJF’s plan to continue the project towards different IJF events, so refugees can participate in international judo events under the IJF flag. Dr. Allan is happy with how to project evolves. As an international federation, IJF has become a flagbearer in dealing with refugees and sport. “I’m very satisfied indeed”, she confirms. “The IOC is using IJF as an example of good practice and how we developed the different criteria. If an athlete comes to us and meets the right criteria, we can support him of her to get them on the international competition platform.” 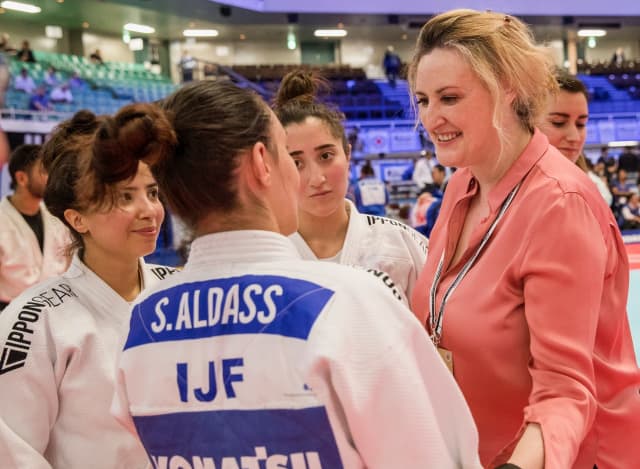 Dr. Lisa Allan with the Refugees

“Wouldn’t it be a wonderful world if we didn’t need these rules nor a refugee team. Alas we need them and luckily we have them,” Dr. Allan says. “People that until recently had no change to participate in our sport because of the hardship they endured, now can again.”

“They are people like you and I,” says Marine Stroobants, who has been the liaison person between the IJF Office and the refugees. “Regardless of all setbacks they have encountered in their life, they continue to have a very positive attitude. Although they experienced some though times, they see the future brightly. They are nice people to work with. Grateful for the aid they receive.” 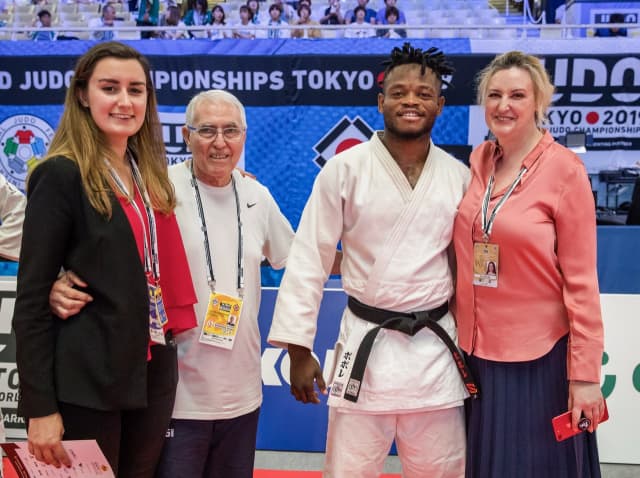 “It’s really great to be part of the IJF Refugee Team”, says Faris Badawi, originally from Syria. “It’s a very high level and I think we can improve ourselves if we would do more training camps. I hope I can compete again at this level.” Faris currently resides in Hannover, Germany. Judo helped him to settle in into his new community. “By joining the local judo club I made a lot of new friends,” he says. “I also learned German. Being part of the IJF Refugee Project is a fantastic opportunity for me.”

Muna Dahouk also fled Syria. She currently builds a new life in Den Bosch, The Netherlands where she also re-joined a judo club. “I’m only 7 months there now,” she says. “I’m settling in and learning Dutch. For me it’s the first time I compete at the Worlds. As a judoka it’s an amazing experience. It’s great to be part of this team. I’m so happy with this opportunity. I will work hard to improve myself.”