Tel Aviv Grand Prix silver medallist Shirine BOUKLI (FRA) shone in the women’s lightest weight category in Düsseldorf as the fast-rising youngster shocked former world champion TONAKI Funa (JPN) to claim gold. In only her third Grand Slam outing BOUKLI countered TONAKI with her patented sumi-gaeshi for a waza-ari score and showed her impressive defensive ability to hold out against the Japanese dynamo who has now opened the door for teammates KOGA Wakana and TSUNODA Natsumi to make a late rally for Tokyo 2020 selection. 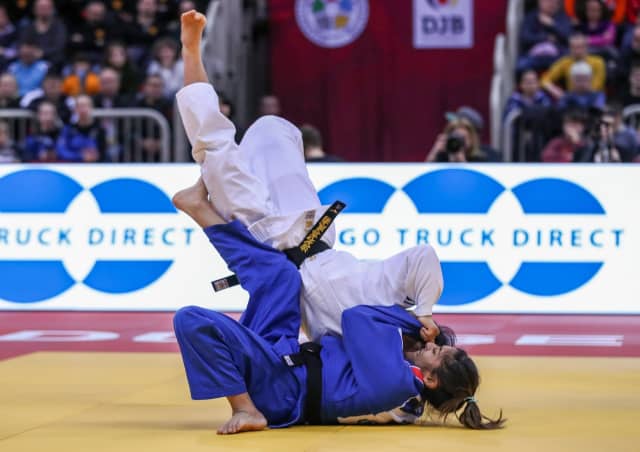 In the first semi-final TONAKI pinned down world number 13 Milica NIKOLIC (SRB) on the ground and the Serbian judoka elected to tap out after 14 seconds. 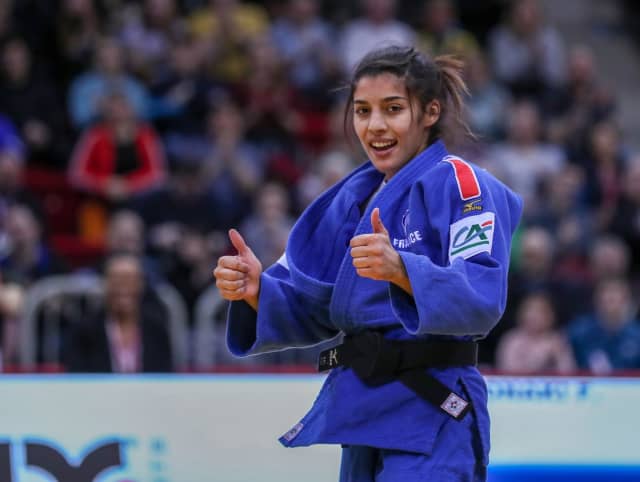 In the second semi-final BOUKLI denied Abu Dhabi Grand Slam bronze medallist Katharina MENZ (GER) a final at home as the young French judoka picked up the win after 72 seconds of golden score from a sumi-gaeshi.

The first bronze medal contest was won by Tashkent Grand Prix winner Sabina GILIAZOVA (RUS) as MENZ and the home crowd were left frustrated. There was immediate interest for the hosts in the final block as the opening contest on Friday evening featured home judoka MENZ who was penalised for a third time for a false attack after three minutes of golden score to hand the medal to GILIAZOVA.

The second bronze medal was won by Osaka Grand Slam silver medallist Julia FIGUEROA (ESP) after NIKOLIC was dismissed in golden score for picking up her third shido in a scoreless contest which failed to ignite. 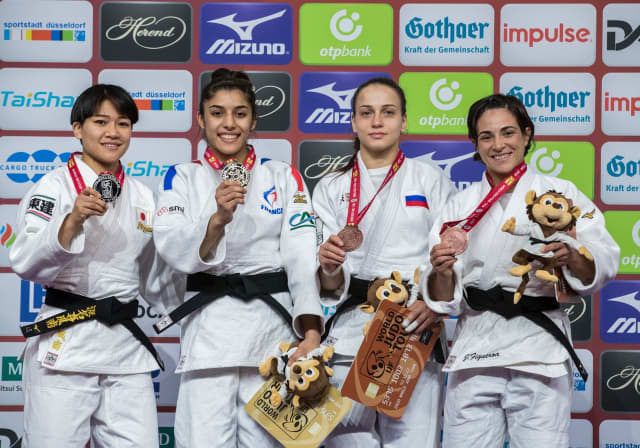 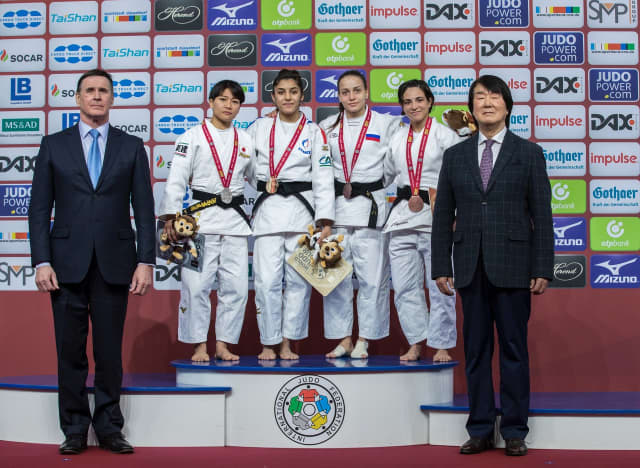 World champion ABE Uta (JPN) extended her one-sided head-to-head record over her nearest rival and world number one Amandine BUCHARD (FRA) to 5-1 in a reverse of their last meeting at the Osaka Grand Slam in November. BUCHARD, who is the only non-Japanese judoka to beat ABE on the IJF circuit, kept in the contest until the second minute of golden score when she was penalised with her third shido for passivity as teen wonder ABE started the biggest year of her young career with gold in Germany. 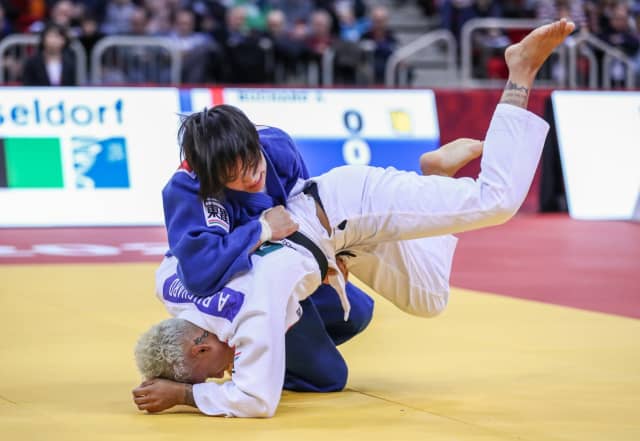 In the first semi-final BUCHARD outfought Tashkent Grand Prix silver medallist BISHRELT Khorloodoi (MGL) on the ground and submitted her opponent with shime-waza to progress to the final. 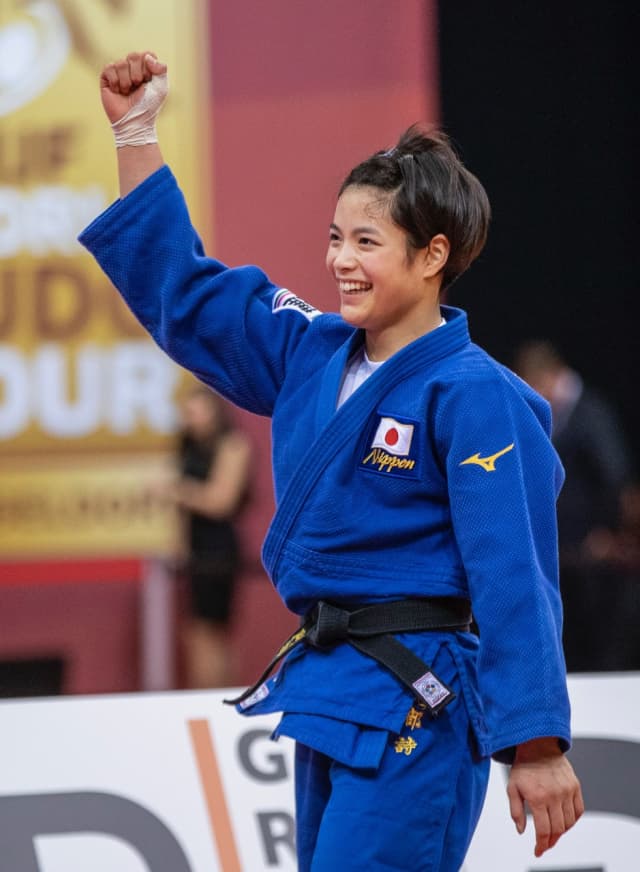 In the second semi-final ABE threw Ekaterinburg Grand Slam winner Gili COHEN (ISR) for a waza-ari score with an o-goshi and effortlessly transitioned into the holddown to seal a comfortable victory.

The first bronze medal was awarded to Montreal Grand Prix silver medallist Angelica DELGADO (USA) who recorded a huge win which will put her on the brink of Olympic qualification. DELGADO downed COHEN by two scores without reply in a riveting display. A seoi-nage opened the scoring before an o-uchi-gari made sure of the win and the American jumped for joy as she will now jump up the rankings from her starting position this morning which was number 16 in the world.

The second bronze medal was won by BISHRELT after 18-year-old Junior World Championships gold medallist LKHAGVASUREN Sosorbaram (MGL) was given her marching orders after picking up her third shido for dropping with 28 seconds left on the clock. 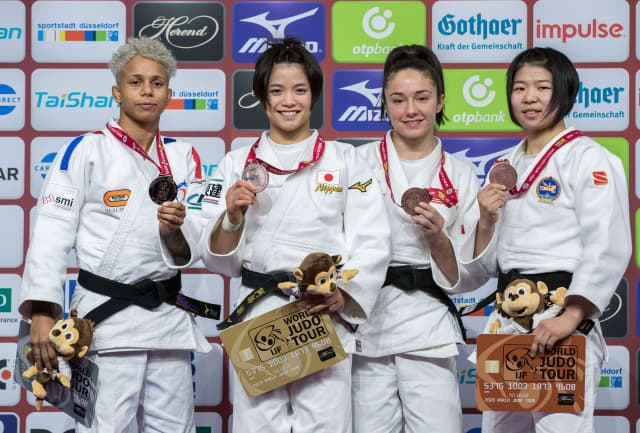 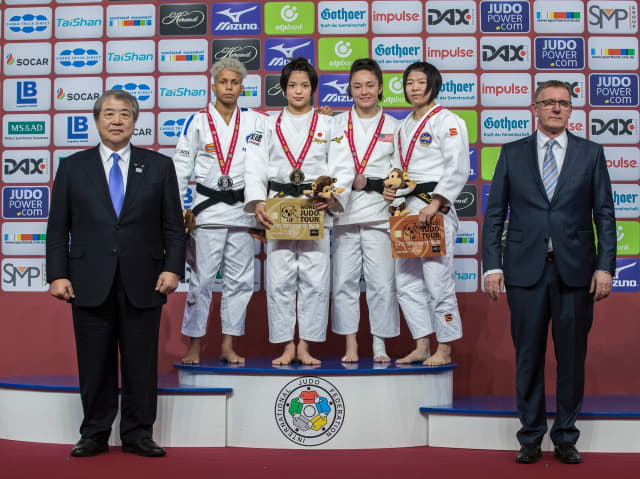 -57kg: Faultless KLIMKAIT keeps up the pressure on teammate DEGUCHI

World Judo Masters bronze medallist Jessica KLIMKAIT (CAN) defeated world number 10 Sarah Leonie CYSIQUE (FRA) for the fourth time in as many meetings to earn her second Grand Slam gold medal. KLIMKAIT saw off her French rival by ippon from a sode-tsurikomi-goshi at the halfway point of the final. World champion and world number one Christa DEGUCHI, who was not present in Germany, has the advantage over KLIMKAIT but the 2013 Cadet World Championships gold medallist delivered a determined display of the highest quality while under an almost unbearable level of pressure. Canada’s dramatic race for Tokyo 2020 will continue with their battle expected to be settled by a best-of-three play-off between the two following the closure of the Olympic qualification period in May. 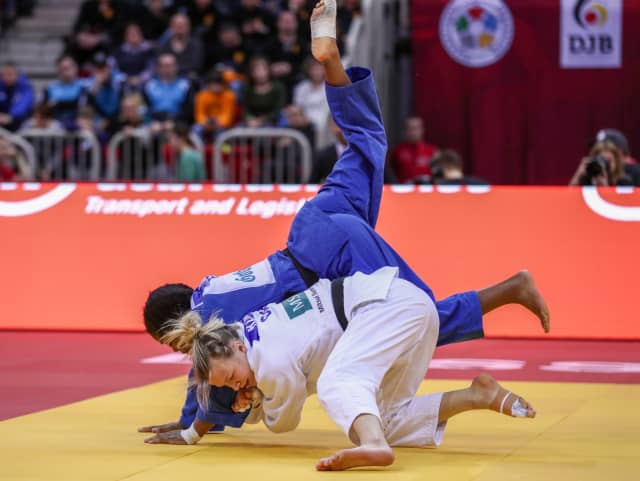 In the first semi-final KLIMKAIT edged past former world champion DORJSUREN Sumiya (MGL) with a waza-ari score with 35 seconds left on the clock. 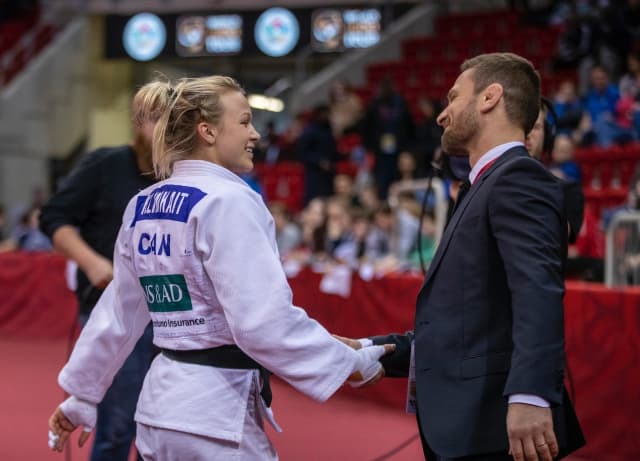 In the second semi-final Brasilia Grand Slam bronze medallist Theresa STOLL (GER) was catapulted through the air for ippon by CYSIQUE from a sublime ashi-guruma on the edge of the area after 90 seconds of golden score.

The first bronze medal was awarded to two-time Grand Prix winner Anastasiia KONKINA (RUS) who eased past STOLL by two scores as the hosts missed the podium on day one in Düsseldorf.

The second bronze medal was won by DORJSUREN who dropped under Montreal Grand Prix bronze medallist Timna NELSON LEVY (ISR) with a seoi-nage after 90 seconds of golden score for ippon. 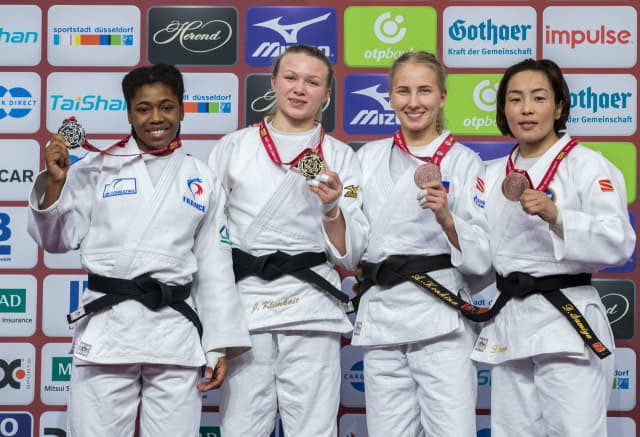 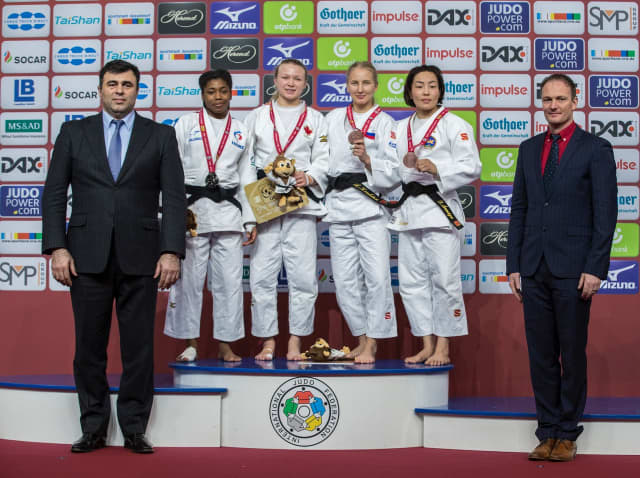 Three-time world champion TAKATO Naohisa (JPN) handed Japan gold in the men’s lightest weight category as he starred in the prelims before being spared an appearance in the final block as Osaka Grand Slam bronze medallist YANG Yung Wei (TPE) could not compete in the -60kg final due to injury. Grand Slam specialist TAKATO, who now has three more gold medals at this level than second-placed TACHIMOTO Megumi on the all-time list, did exactly what he needed to do a week removed from the victory of his teammate NAGAYAMA Ryuju (JPN) in Paris and their domestic duel for Tokyo 2020 selection looks set to continue until the All Japan Championships in April. The unfortunate YANG still impressed during his road to the final and gained enough points to break into the top 10 in the world when the rankings are updated on Sunday evening. 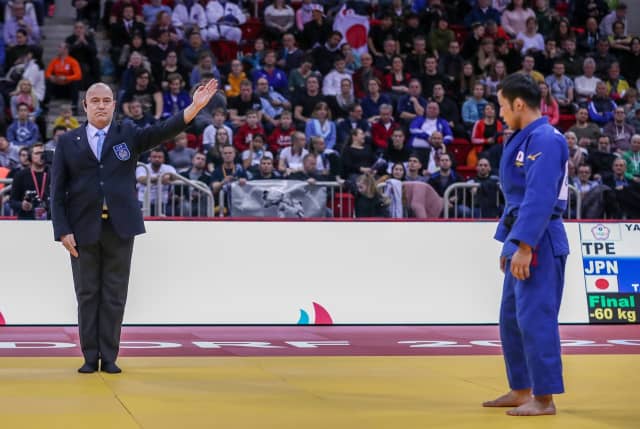 In the first semi-final Budapest Grand Prix bronze medallist Tornike TSJAKADOEA (NED) was held down by YANG in golden score as the latter guaranteed his best result on the IJF World Judo Tour. 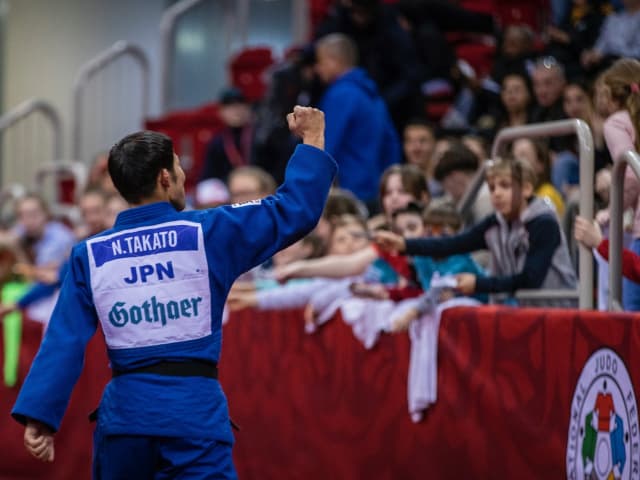 In the second semi-final TAKATO launched Tel Aviv Grand Prix winner KIM Won Jin (KOR) with a sode-tsurikomi-goshi for ippon to charge into the final.

The first bronze medal was won by KIM after European Games bronze medallist Jorre VERSTRAETEN (BEL) was off the pace throughout their contest and was penalised with his third shido after three minutes to receive hansoku-make.

The second bronze medal went to TSJAKADOEA after Baku Grand Slam silver medallist Temur NOZADZE (GEO) was disqualified after six minutes of added time for diving. NOZADZE was left almost inconsolable after missing the podium by the smallest of margins as TSJAKADOEA recognised his immense disappointment by holding aloft the arms of the defeated judoka. 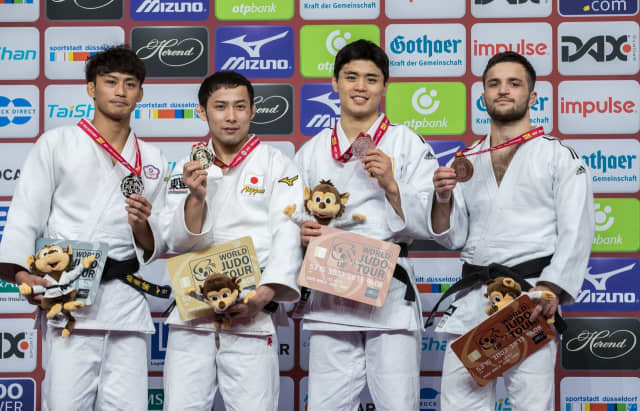 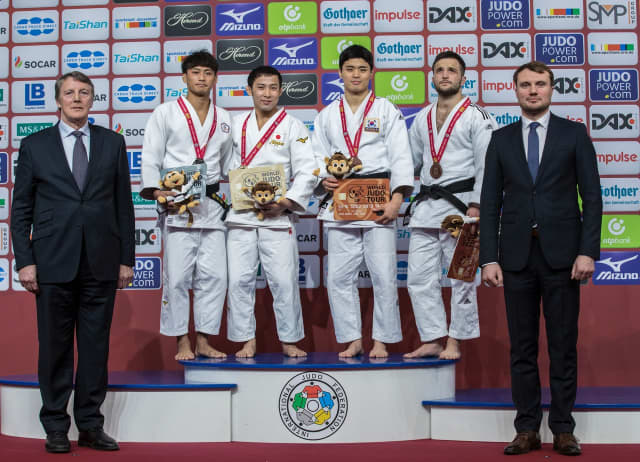 Former world champion ABE Hifumi (JPN) secured his eighth Grand Slam title after a thrilling final against World Judo Masters bronze medallist Vazha MARGVELASHVILI (GEO). ABE lived dangerously in the opening minute as he was inches away from going behind to a ko-soto-gari and was almost caught with an ura-nage. ABE, who was Japan’s only -66kg representative in Germany after the late withdrawal of teammate and world champion MARUYAMA Joshiro (JPN), came up with two big scores in the final to win in style. A lightning fast o-uchi-gari sent MARGVELASHVILI over for a waza-ari score before the Japanese superstar launched his Georgian rival with an o-goshi for ippon. 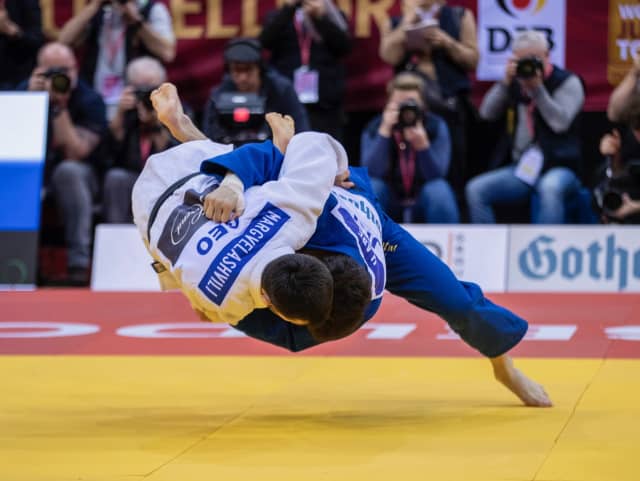 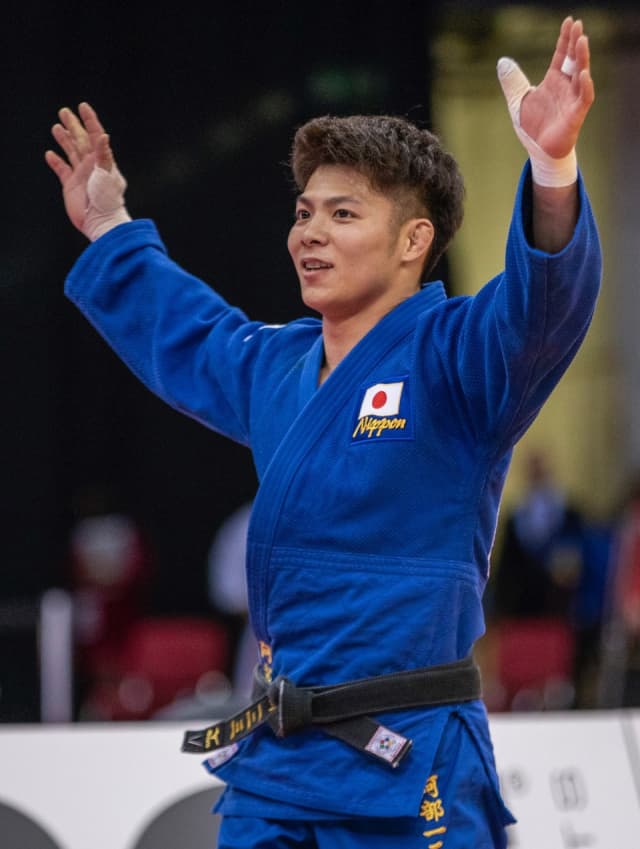 The first bronze medal was won by Zagreb Grand Prix winner Alberto GAITERO MARTIN (ESP) who tapped out TEMELKOV with shime-waza after just 41 seconds following a great transition from the Spaniard.

The second bronze medal went to SHAMILOV who narrowly defeated European Games bronze medallist Bagrati NINIASHVILI (GEO) by a waza-ari score in an entertaining tussle which went the distance. 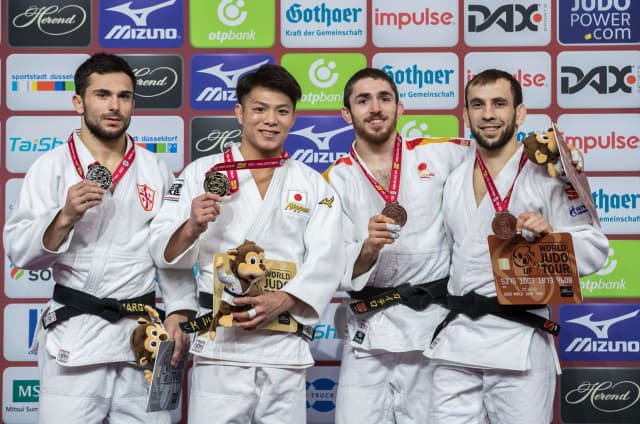 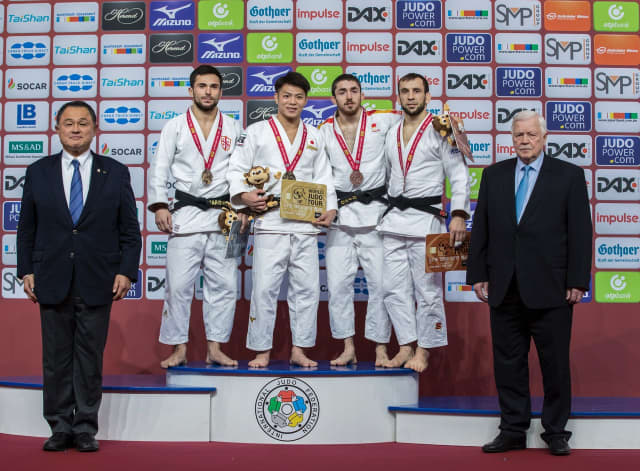