Written by Mark Pickering on 06. Oct 2016
Share
Russia at the double to lead hosts Uzbekistan

The Tashkent Grand Prix 2016, the second Grand Prix of the new Olympic cycle, opened on Thursday with a day of compelling judo at the Uzbekistan Sport Complex.

The IJF World Judo Tour visited Croatia for the Zagreb Grand Prix a fortnight ago for the first competition following the Olympic Games and has now landed in Uzbekistan, Asia. Now in its fourth year, the Tashkent Grand Prix again attracted a capacity crowd as the hosts supported their judoka in their droves.

Tashkent’s leg of the IJF World Judo Tour is the last but one Grand Prix of the year with the Qingdao Grand Prix to come next month, following the Abu Dhabi Grand Slam, before the season ends in December with the Tokyo Grand Slam. The post-Olympics period sees many champions enjoy the fruits of their victories and lap up their success as they satisfy media and sponsorship commitments and continue to raise their profiles.

Future champions are being unearthed in Tashkent as the competition has a youthful look as countries are introducing their top prospects to the IJF World Judo Tour. It is worth making a note of the names of the champions in Tashkent as the young field is bursting with talent and many are destined for major honours.

Before the medal contests gripped the crowd, the opening ceremony was held as the IJF made a presentation to Judo Federation of Uzbekistan President Mr. Armen BAGDASAROV. 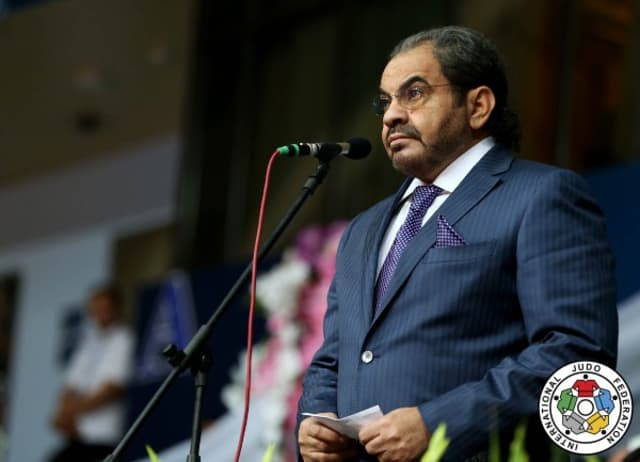 BAGDASAROV is a national hero in his country having won Uzbekistan’s first Olympic medal when he took silver at the Atlanta 1996 Olympic Games.

Mr. AL-ANZI said: “Dear Deputy Prime Minister, Minister of Sport, President of Uzbekistan Olympic Committee, President of JFUz, dear Executive Committee members of IJF, ladies and gentleman, on behalf of the IJF President Mr. Marius VIZER I would like to thank Government of Uzbekistan and the Judo Federation of Uzbekistan for hosting this Grand Prix in Tashkent. Thank you for the good hospitality and I would like to congratulate the Federation on the Rio 2016 results. I also thank the JFUz for successfully hosting the Asian Championships this year and wish you all a good competition.” 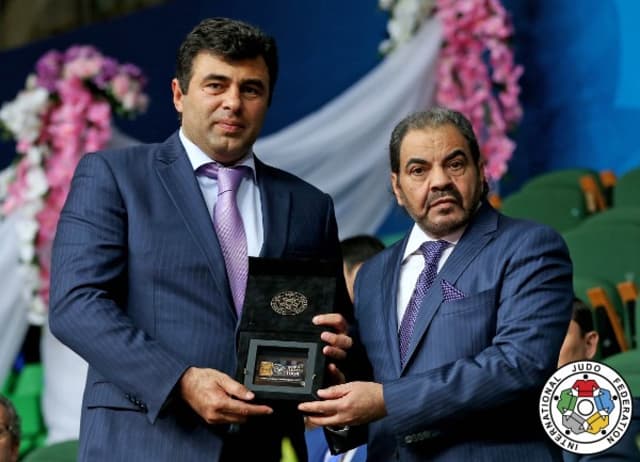 Mr. Adkham ILKHAMOV, Deputy Prime Minister of the Republic of Uzbekistan, said: “Good evening dear guests, ladies and gentlemen, I would like on behalf of the Government share my gratitude for your participation in this event. For me it is a great honour to open this Grand Prix

“I welcome all participants here, sport is very important to the identity of our country. Today judo brings out honest, courage and bravery. More than 20,000 people practice judo all over Uzbekistan. I would like to extend my gratitude to IJF President Mr. Marius VIZER, JUA President Mr. Obaid AL-ANZI and to everyone taking part in this competition. I officially declare the Grand Prix open.” 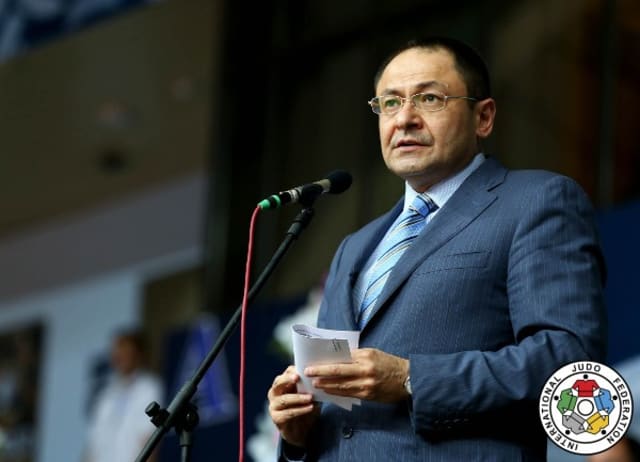 -48kg: PERSIDSKAIA steps up with Grand Prix gold for Russia

Sofia European Open winner Mariia PERSIDSKAIA (RUS) won her first IJF gold medal in the first final of the Tashkent Grand Prix 2016. The top seed squared off against Orenburg European Cup bronze medallist Lilia LOTFULLINA (RUS) for the right to be Russia’s representative on the top of the medal podium. PERSIDSKAIA, 27, made the grade as she improved on her two previous seventh-place finishes at Grand Prix events and could now feature more regularly for Russia. The fate of the gold medal was decided with 27 seconds left on the clock as an ouchi-gari earned ippon and a career-best gold for PERSIDSKAIA. 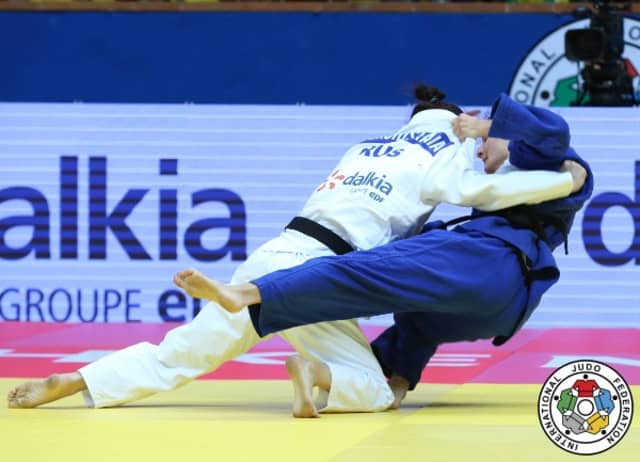 In the first semi-final PERSIDSKAIA bested an overmatched world number 150 Mukaddas KUBEEVA (UZB). A ko-uchi-gari from the Russian fighter earned a waza-ari and was the pick of her scores as she confidently progressed into the gold medal contest.

The first bronze medal contest was won by GULOVA as she held down her 20-year-old teammate Munira KARIMOVA (UZB) with osaekomi for 20 seconds. KARIMOVA was fighting in her second Grand Prix and will have to wait for her first senior international medal.

The second bronze medal was won by KUBEEVA by ippon against 21-year-old IJF Grand Prix newcomer Uldana SAIYL (KAZ). Both judoka were competing in an IJF medal contest for the first time and it was the home judoka who could celebrate as she floored SAIYL with a fantastic ouchi-gari with 26 seconds left. 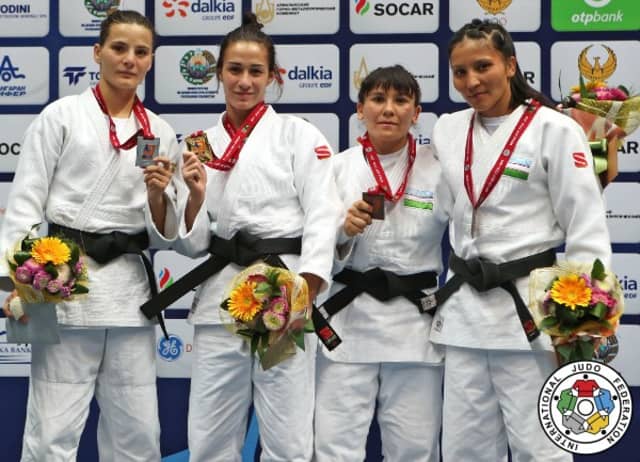 Aigunim TUITEKOVA (KAZ) was the surprise winner in the -52kg category as she sealed her first IJF World Judo Tour victory by ending the spirited run of 18-year-old cadet world champion Diyora KELDIYOROVA (UZB). Uzbekistan’s starlet was aiming to become the first woman from her country to win a Grand Prix and would have been the second youngest ever Grand Prix winner. TUITEKOVA had other ideas and this was her moment as she prevailed by a yuko as neighbouring Kazakhstan made a bright start to the competition. 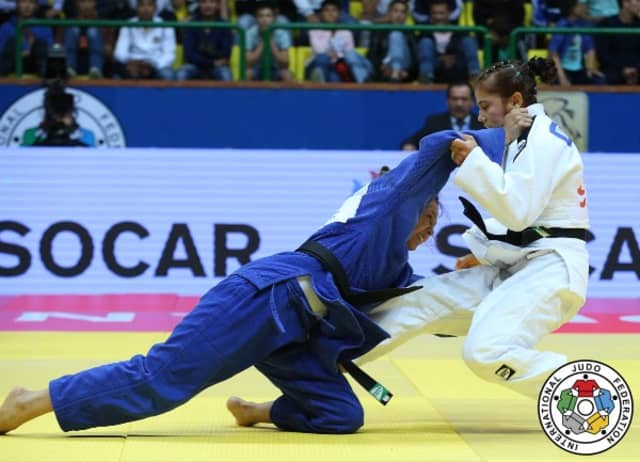 In the first semi-final Tyumen Grand Slam bronze medallist Tena SIKIC (CRO) was narrowly defeated by KELDIYOROVA. The 18-year-old Uzbek tried a tomoe-nage into juji-gatame on multiple occasions with any success but her workrate and the lack of endeavours from the Croatian brought about a shido for SIKIC for passivity. The Uzbek arm hunter guaranteed her first IJF senior medal by winning the scoreless contest by two shidos as SIKIC was penalised a second time for being passive.

In the second semi-final Tyumen Grand Slam bronze medallist Aigul TASHTIMIROVA (RUS) was humbled by TUITEKOVA (KAZ) on shido penalties. With no scores registered after four minutes, the contest was settled by shidos with two against the Russian and only one against the Kazakh.

The first bronze medal was clinched by 18-year-old Gulaim JUMABAEVA (UZB) in golden score against TASHTIMIROVA. Junior Asian Cup bronze medallist JUMABAEVA scored with a tomoe-nage as that yuko won the contest for the hosts and the aforementioned judoka could celebrate the greatest moment of her young career.

The second bronze medal was won by SIKIC who has been one of the young judoka to make a major impact on the IJF World Judo Tour in this post-Olympics stage. Former Tashkent World Cup bronze medallist Dildora UBAYDULLAEVA (UZB) fell to two waza-ari scores as SIKIC looked composed while taking on the home fighter and this fine result will continue her steady climb up the world rankings.
Final
KELDIYOROVA, Diyora (UZB) vs TUITEKOVA, Aigunim (KAZ) 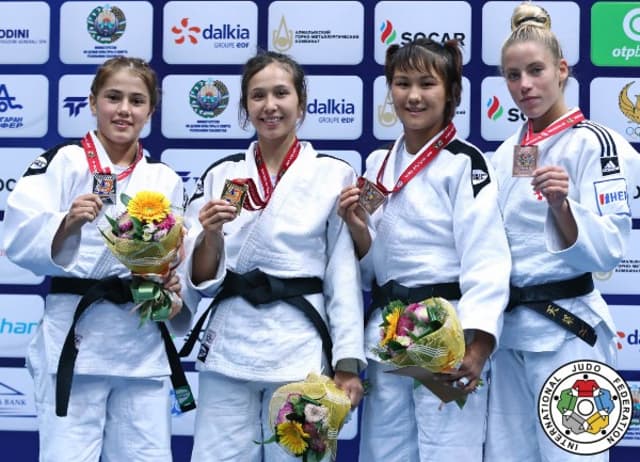 -57kg: Dream debut for KONKINA sends Russia to the top of the medal table

Former Orenburg European Cup winner Anastasiia KONKINA (RUS) made a highly-impressive IJF Grand Prix debut as she won all three of her contests by ippon including the final. The 22-year-old proved to be unbeatable in Tashkent as she beat German European Cup bronze medallist Manon DURBACH (LUX) in the -52kg final. A waza-ari from a ko-soto-gake gave the Russian youngster the lead and control of the contest and she followed up by countering an uchi-mata for a second and match-winning waza-ari. 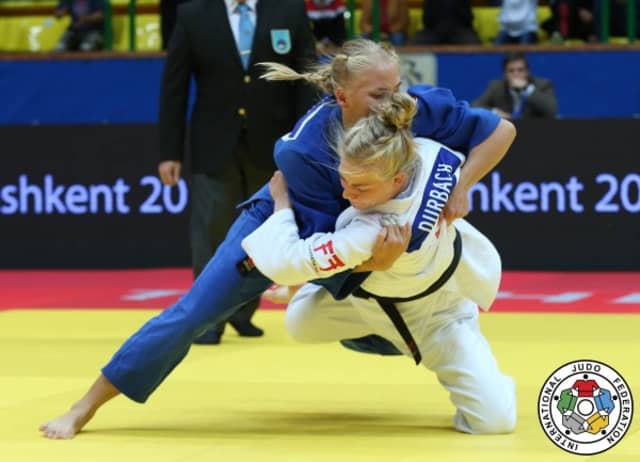 In the first semi-final DURBACH held down 22-year-old Anna KAZYULINA (KAZ) for 20 seconds and ippon to book a place in the final. In the second semi-final KONKINA defeated former Almaty Grand Prix bronze medallist Sevara NISHANBAYEVA (KAZ) by the maximum score.

The first bronze medal was won by NISHANBAYEVA who pinned down 22-year-old Amangul ALLANAZAROVA (UZB) - who has only ever competed in Uzbekistan – with a yoko-shiho-gatame.

The second bronze medal was won by 17-year-old Sanobar SULTANOVA (UZB) who bested KAZYULINA as the Kazakh fighter was disqualified for an illegal head dive. 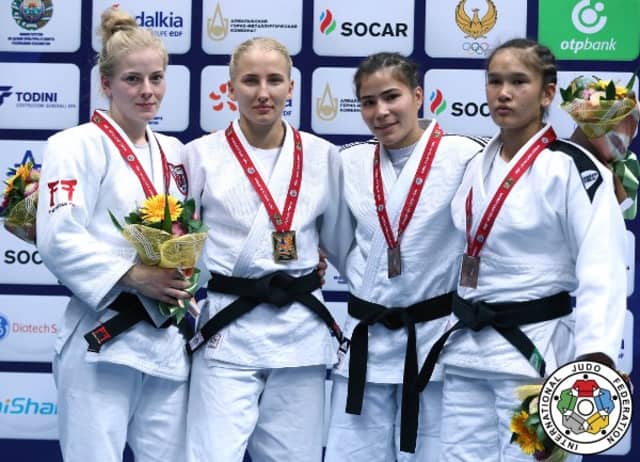 Complete unknown Mukhriddin TILOVOV (UZB) won the first men’s final as he stunned the opposition to give his country a golden start to their home event. Former Taipei Asian Open winner Matjaz TRBOVC (SLO) was contesting his first IJF final and gave it everything as the two judoka fought into golden score. Two and a half minutes of added time was required as a riveting final had spectators out of their seats throughout. A ko-soto-gari brought the contest two a conclusion as TILOVOV made the most of his first IJF event for Uzbekistan. 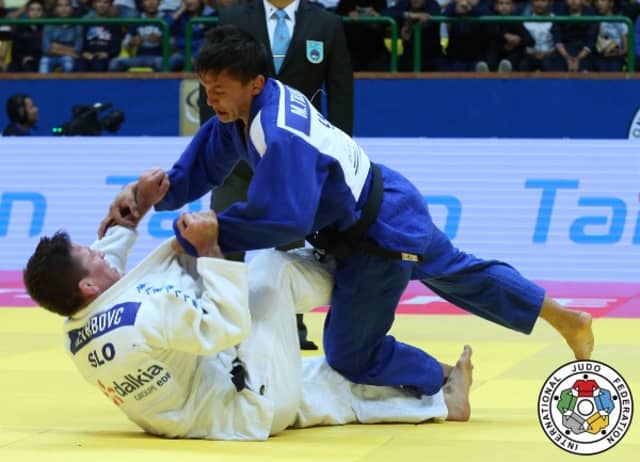 In the semi-finals former world silver medallist DASHDAVAA Amartuvshin (MGL) surprisingly succumb to TRBOVC. The Slovenian guaranteed his first Grand Prix medal by catching his more fancied Mongolian foe with an ouchi-gari for a waza-ari and held on for an eye-catching win.

In the second semi-final 19-year-old Bauyrzhan ZHAUYNTAYEV (KAZ) lost out to 22-year-old IJF World Judo Tour debutant TILOVOV. With a shido apiece going into the last 50 seconds and no scores registered the contest looked set for golden score but national champion TILOVOV had other plans as he burst forward and won by ippon to the delight of the home supporters.

The first bronze medal was won by ZHAUYNTAYEV who defeated 18-year-old IJF World Judo Tour debutant Tofig MAMMADOV (AZE) by a shido penalty. The second bronze medal went to Budapest Grand Prix bronze medallist Sharafuddin LUTFILLAEV (UZB) who defeated the disappointing DASHDAVAA. The Mongolian led with a yuko from a standing seoi-nage before LUTFILLAEV levelled the score. DASHDAVAA received a shido for a gripping infringement and was thrown with a ko-soto-gake for a waza-ari as Uzbekistan chalked up one more medal. 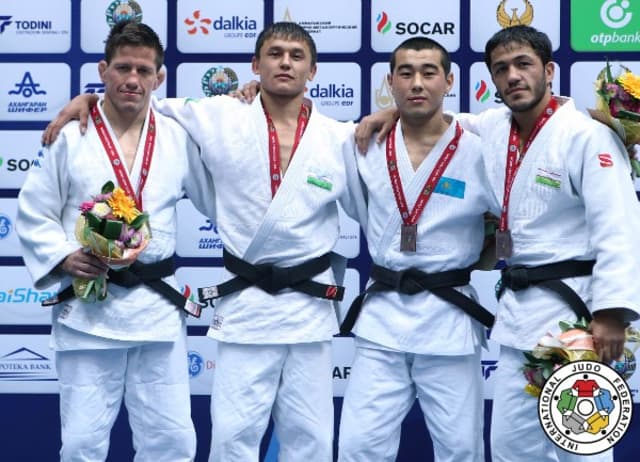 Former World Judo Masters bronze medallist TAKAICHI Kengo (JPN) won -66kg gold for Japan with a determined display on day one. TAKAICHI, 23, who was behind EBINUMA Masashi in the domestic pecking order in the race for Rio, looks poised to be in a battle with boy wonder ABE Hifumi on the road to Tokyo 2020. The Japanese judoka, who is part of a two-man team in Tashkent, was locked in a battle for grips with former world silver medallist Azamat MUKANOV (KAZ) before scoring a waza-ari with a drop seoi-nage. TAKAICHI used up as much time as possible on the ground as a ne-waza scramble ensured and the former was in no rush to return to a vertical base. 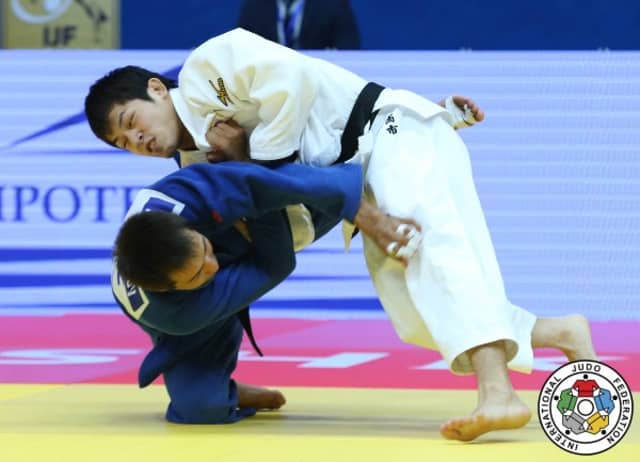 The first bronze medal was won by world number 19 JEREB who defeated 20-year-old Dzmitry MINKOU (BLR). Slovenia have been one of the countries to lay down a marker in these post-Olympic events as they have been highly-active and successful. MINKOU, who finished seventh on his IJF debut at the Samsun Grand Prix, was thrown for a waza-ari to at last move in the right direction and finish fifth in Tashkent.

The second bronze medal went to world number four DOVDON who defeated unranked 21-year-old IJF debutant Sardor NURILLAEV (UZB). DOVDON trailed to a yuko score going into the final minute and NURILLAEV had been penalised three times which made for an intriguing last 60 seconds. The Mongolian tied up the score with a sumi-gaeshi with 40 seconds left and won the bronze medal on shido penalties as the inexperience of NURILLAEV showed. 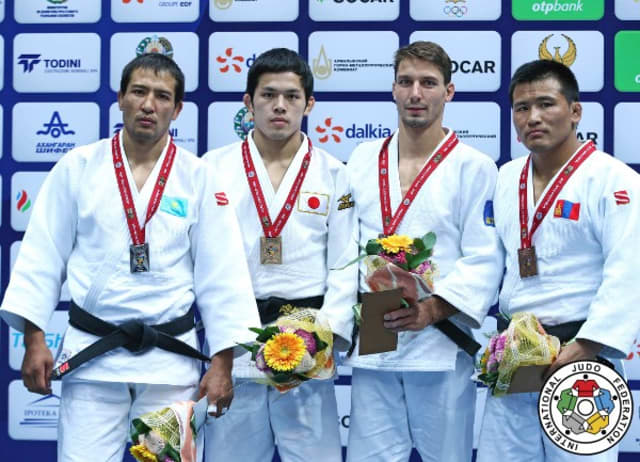