Hosts Uzbekistan overtook Russia at the top of the medal table at the Tashkent Grand Prix as they won three of the four gold medals at stake on day two including history-making Gulnoza MATNIYAZOVA (UZB) who became the first woman from Uzbekistan to win IJF Grand Prix gold at the Uzbekistan Sport Complex on Friday.

The fourth edition of the Tashkent Grand Prix provided their country’s first female gold medallist as Uzbekistan won gold in the -70kg category while their men charged to victory in the -73kg and -81kg categories.

Gulnoza MATNIYAZOVA has long been at the forefront of her country’s women’s programme as a three-time Grand Prix bronze medallist and is one of a new and exciting generation of young females who are changing the face of Uzbekistan judo.

The Judo Federation of Uzbekistan has an illustrious men’s programme which was seen at the Olympics when they won two bronze medals through Rishod SOBIROV and Diyorbek UROZBOEV and dates back to current President Armen BAGDASAROV winning silver at the 1996 Olympics. 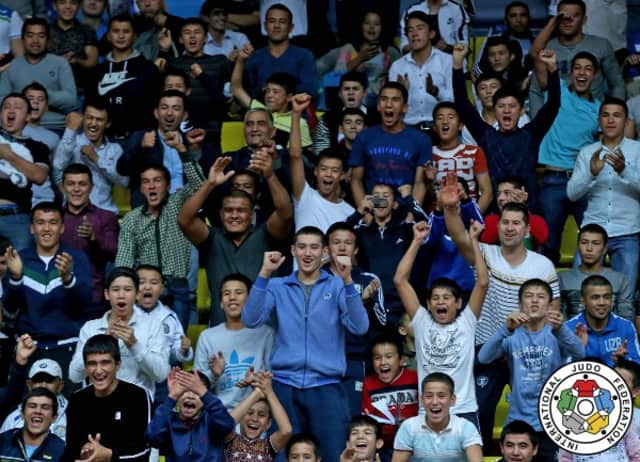 The country also starred at the Rio 2016 Paralympic Games as they won 10 medals in judo including three bronze and one silver from their women.

Uzbekistan were able to enter 27 women into the Tashkent Grand Prix 2016 which is one less than the maximum they are allowed to enter as hosts as they suffered a late injury. The 27-strong contingent had a two-week training camp at the IJF Olympic Training Centre in Tashkent before the competition and the results speak for themselves. Youth is the key for Uzbekistan as the majority of those 27 judoka are still juniors and are slowly but surely emerging onto the IJF World Judo Tour.

The Tashkent Grand Prix will conclude on Saturday with the heavyweights as the men’s -90kg, -100kg and +100kg categories will grace the two tatami along with the women’s -78kg and +78kg categories. 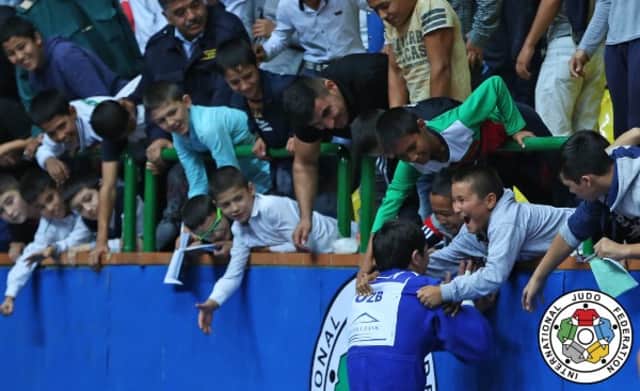 Tyumen Grand Slam silver medallist Daria DAVYDOVA (RUS) topped an IJF World Judo Tour medal podium for the first time as she defeated Baku Grand Slam silver medallist Marijana MISKOVIC HASANBEGOVIC (CRO) to win -63kg gold. MISKOVIC HASANBEGOVIC, who finished a career-best seventh at the World Championships last year, is the oldest judoka in the category in Tashkent but also the highest ranked. The world number 23 from Croatia, who was beaten in the first round of the Zagreb Grand Prix two weeks ago, fell behind to waza-ari from an uchi-mata and battled until the end but was second best. 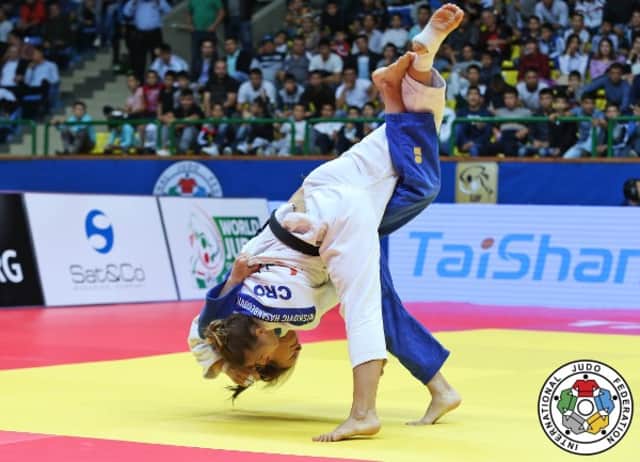 In the first semi-final MISKOVIC HASANBEGOVIC defeated Ulaanbaatar Grand Prix bronze medallist Andreja LESKI (SLO). The 34-year-old Croatian beat the 19-year-old Slovenian with shime-waza as an osoto-gari sent the youngster down to a horizontal base and the veteran applied the okuri-eri-jime strangle to force the submission.

In the second semi-final DAVYDOVA beat little-known 23-year-old Mukhayyo IBRAGIMOVA (UZB) by a waza-ari to guarantee one more medal for Russia who started day two top of the medal table.

The first bronze medal was won by Tallinn European Open bronze medallist Daniela KAZANOI (BLR) who defeated IBRAGIMOVA by a yuko from an ouchi-gari. The result is a career-best for the 23-year-old from Belarus who will look to become a mainstay on the IJF World Judo Tour.

The second bronze medal was won by LESKI over former Tashkent Grand Prix silver medallist Hannah MARTIN (USA).  It’s no surprise to see Slovenia win a medal at -63kg as they have among their ranks the Rio 2016 Olympic champion (Tina TRSTENJAK) and London 2012 Olympic champion at this weight (Urska ZOLNIR). MARTIN, who travels further and wider than most judoka in search of IJF honours, was penalised after 51 seconds in golden score as both judoka were unable to penetrate the scoreboard in regular time. 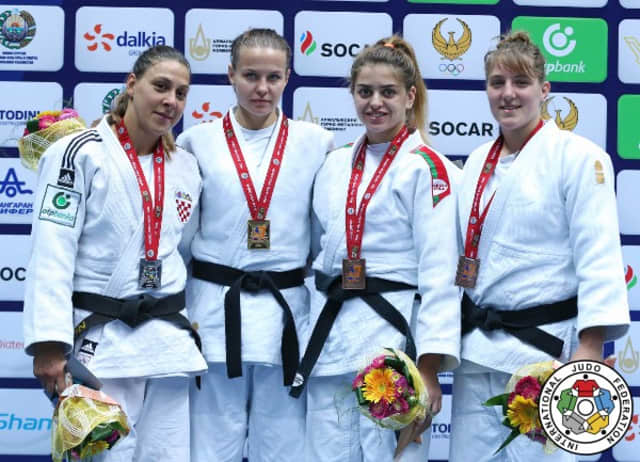 Budapest Grand Prix bronze medallist Gulnoza MATNIYAZOVA (UZB) defeated Zagreb Grand Prix bronze medallist Anka POGACNIK (SLO) to fulfil her destiny as the first woman to win IJF gold for Uzbekistan. The 22-year-old Asian Championships silver medallist is leading a female revolution for her country and made that point in the most important setting in her homeland with maximum attention on her exploits. The world number 28 faced Sofia European Open winner POGACNIK, 24, in the final as the crowd were salivating when their hero-in-waiting took to the mat to compete for gold. The nervy contest went the distance with no score and no shidos after four minutes which meant that golden score would be required to determine a winner. MATNIYAZOVA delivered the moment she has waited for her entire career as she found a way past POGACNIK with a makikomi after an additional one minute and 23 seconds and jumped for joy on the middle of the mat after being awarded the gold medal-winning score. 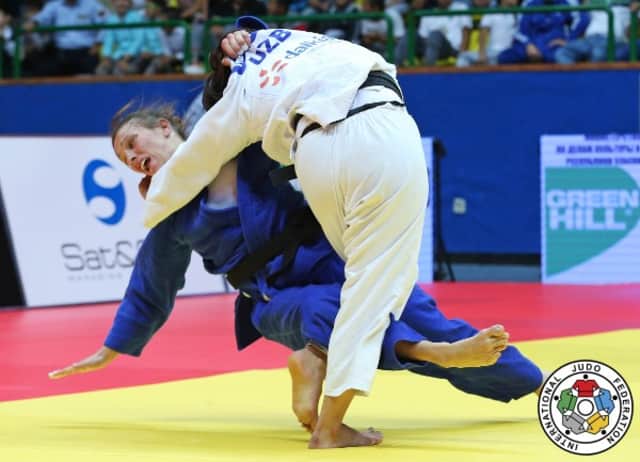 In the first semi-final MATNIYAZOVA showed why she was the top seed as she sent 21-year-old Aelita CHSHERBAKOVA (KAZ) up and over with a breathtaking uchi-mata after 52 seconds for ippon and one of the most spectacular scores of the competition.

In the second semi-final Zagreb Grand Prix bronze medallist Anka POGACNIK (SLO) pinned down 23-year-old Iana DIBRINA (RUS) with a kuzure-kami-shiho-gatame for 20 seconds for ippon and a place her first Grand Prix final.

The first bronze medal was claimed by DIBRINA who showed her lethal ne-waza to topple 21-year-old Vasila ALIBOEVA (UZB) who has only competed at the Tashkent Grand Prix in 2015 and 2016 on the IJF stage. With famed French ne-waz specialist Jean-Pierre GILBERT in the chair for DIBRINA, the young fighter won her first IJF medal with a performance that her coach will be very proud of. The Russian had finished seventh at the last two Tyumen Grand Slam events and took experience and disappointment with her into today as she seized her chance to showcase her developing skills in Uzbekistan. DIBRINA, who led by a yuko, held down ALIBOEVA with a sankaku-gatame for 16 seconds for a waza-ari as the home judoka escaped but the former soon regained control on the ground with a mune-gatame for 15 seconds to win by waza-ari awasette-ippon.

The second bronze medal was captured by CHSHERBAKOVA who defeated 19-year-old Junior Asian Cup winner Umida SAIDOVA (UZB) in the opening minute. The Kazakh fighter beat her neighbour to win her first IJF medal by submitting SAIDOVA with a rapid juji-gatame after 38 seconds. 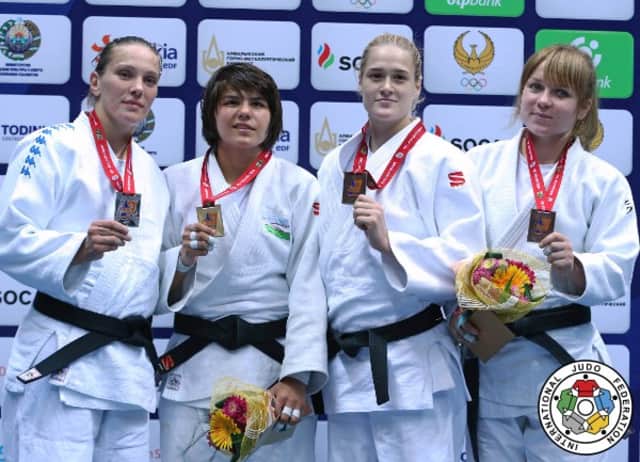 -73kg: FARMONOV flourishes in Uzbekistan against his teammate

Asian Games bronze medallist Mirzahid FARMONOV (UZB) had the measure of his younger teammate and heir apparent in Baku Grand Slam silver medallist Giyosjon BOBOEV (UZB) to win the -73kg title on Friday. FARMONOV, 28 and BOBOEV, 23, who warmed each other up this morning, matched each other for five minutes and could not be separated. The Uzbekistan faithful relished seeing two of their judoka in the final and were always going to appreciate and applaud both men regardless of the outcome. After 44 seconds of golden score, FARMONOV scored a waza-ari from an uchi-mata sukashi as Uzbekistan made it a one-two at -73kg. 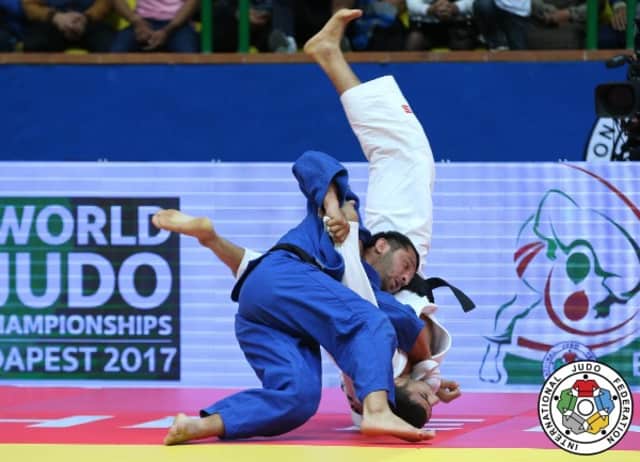 In the first semi-final BOBOEV profited from a rookie mistake by Junior European Championships winner Hidayat HEYDAROV (AZE). The talented 19-year-old was disqualified for a clear hansoku-make for a waki-gatame and reluctantly accepted the decision.

In the second semi-final former Tyumen Grand Slam winner Uali KURZHEV (RUS) was pitted against FARMONOV and the two produced a first-class contest. After trading yuko scores in five minutes of regulation time, there was not a winner so the contest moved into golden score. After 35 seconds the Russian fighter was penalised for passivity to book an all-Uzbek -73kg final.

The first bronze medal was won by KURZHEV who dramatically came from behind to defeat Almaty Grand Prix bronze medallist Yeldos ZHUMAKANOV (KAZ). The Russian was clearly hampered by a right wrist injury and was fighting to contain his opponent. ZHUMAKANOV took the lead with a yuko but got caught with 25 seconds remaining as his tactics were off in the closing minute. KURZHEV still pressed forward and earned a waza-ari from a ko-soto-gake which decided the contest after five minutes. The gutsy Russian judoka then stopped to sign some autographs for young fans before leaving the field of play. 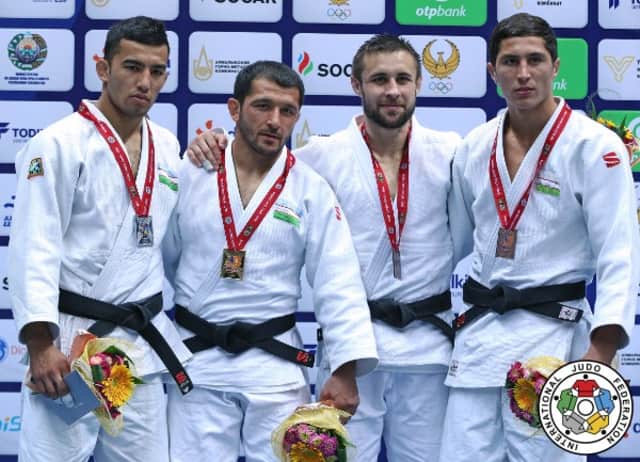 Junior Asian champion Davlat BOBONOV (UZB) underlined his status as one of his country’s top prospects as he won gold on his Grand Prix debut. The 19-year-old bested 24-year-old WATANABE Hayato (JPN) who was also making his Grand Prix debut. WATANABE, who had made one previous appearance on IJF World Judo Tour at the 2014 Tokyo Grand Slam – when he beat WANG Ki-Chun (KOR) before losing to Victor PENALBER (BRA) - was unable to match the gold medal result of his only teammate in Tashkent as TAKAICHI Kengo (JPN) had claimed -66kg gold on day one. BOBONOV produced the only score of the contest – a yuko from an uchi-mata after two minutes – and lived dangerously as he accumulated three shido penalties and just escaped a fourth in the closing seconds. 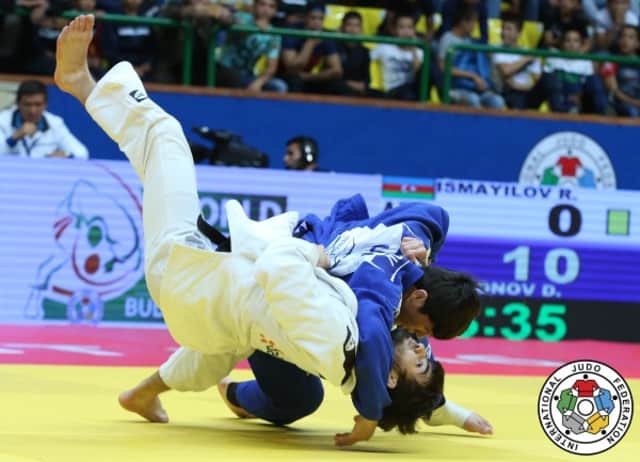 In the first semi-final WATANABE dispatched world number 195 Arman MAKHAMBETOV (KAZ) with a thunderous ippon at the halfway point having led by a waza-ari from a drop seoi-nage. In the second semi-final Prague Junior European Cup bronze medallist Rufat ISMAYILOV (AZE) fell to home judoka BOBONOV by ippon from a koshi-guruma which will be played over and over again on highlight reels.

The first bronze medal was won by ISMAYILOV who shaded 22-year-old Afig SAFARLI (AZE) whose best result before today was fifth at this year’s Ulaanbaatar Grand Prix. ISMAYILOV won the all-Azeri meeting by a yuko score from a reaching osoto-gari.

The second bronze medal was won by former world silver medallist Srdjan MRVALJEVIC (MNE) against MAKHAMBETOV. The 32-year-old, who had the day of his life at the 2011 Worlds when he won silver, won his first Grand Prix medal on shido penalties in a scoreless contest as the Kazakh fighter was penalised twice while the veteran from Montenegro was only penalised once. 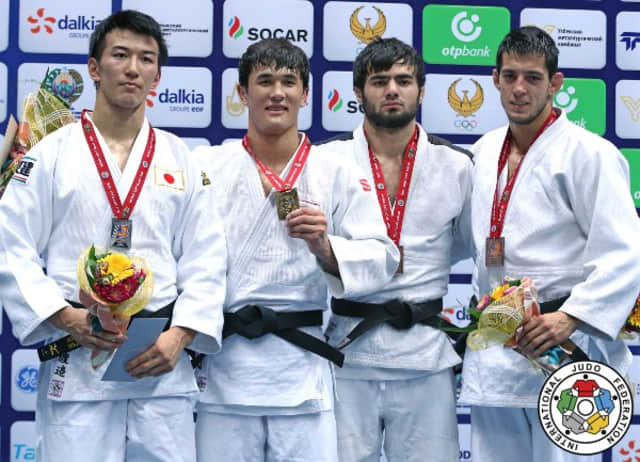