The Debut and the Sequel

Written by Nicolas Messner on 10. Jun 2021
Share
That's it, more than half the competition is over. Five days of competition, five days of intense and often breathtaking spectacle was offered to us by athletes from all over the world. Once again we were able to discover the journey of exceptional champions and those of fallen favourites, while others blazed. We also witnessed a competition full of panache and hope from Rémi FEUILLET, who came, without a complex, from Mauritius and who finished in a very good 7th place. Above all, at the end of the day, we discovered who were the two new world champions, Barbara MATIC, who won the first ever world championship gold medal for Croatia and Nikoloz SHERAZADISHVILI, who won his second world title. Tomorrow, for the sixth day of competition, it is the categories of -78kg for women and -100kg in the men who will be in action. Beautiful judo awaits us!

-70kg: MATIC, First Croatian World Champion The first final of the day saw Barbara MATIC (CRO) facing Yoko ONO (JPN). As the latter was the third seeded athlete of the competition, it was therefore not really a surprise to see her in the final. The story was a little different with Barbara MATIC. 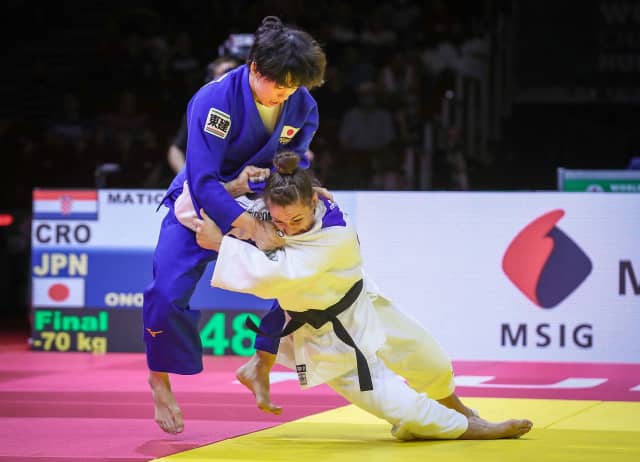 15th in the world ranking list, already winner of Grand Slam Hungary last year and twice a silver medallist this year, in Antalya and Tashkent, the young fighter is not unknown on the circuit. Here in Budapest she was not seeded because there were at least 8 athletes ahead of her, most notably the world number one and current world champion, Marie-Eve GAHIE (FRA).

When the French champion lost first round against the Dutch number three, Hilde JAGER (NED), suddenly the first half of the draw opened up. This was the chance for MATIC, who didn't let go and in the next round defeated the Dutch competitor. After she stopped Miriam BUTKEREIT (GER), MATIC had to pass Michaela POLLERES (AUT) in the semi-final, which she did, after a long golden score period. 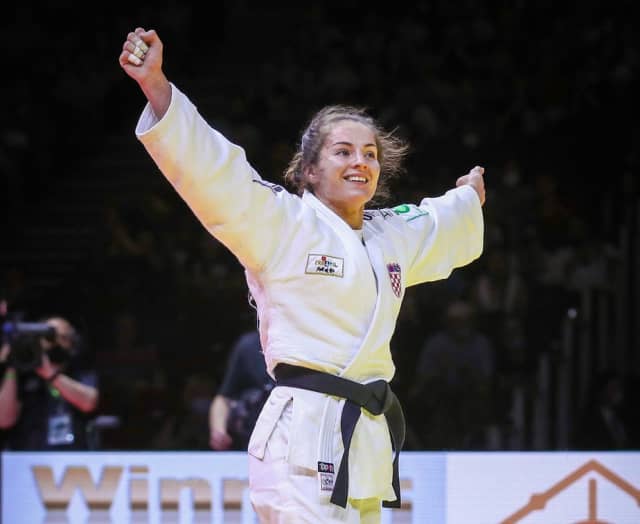 As the final started, MATIC was immediately on the attack and seemed more dangerous than her Japanese opponent. The latter was clearly looking for the ne-waza, where the Japanese team is well known for its skills. MATIC remained focused and careful. As the end of the match was approaching with only a couple of shido to see, the Croatian competitor scored a welcome waza-ari, but it was not over. Until the very last second, ONO tried desperately to strangle her opponent but MATIC resisted and when the final gong echoed in the arena, she could kneel, arms wide open in a sign of victory. She was the world champion, the first ever world champion for Croatia.

Barbara MATIC said, "I was calm during the final until those last 40 seconds on the floor. It was the longest 40 seconds of my life. My coach was shouting "don’t tap, don’t tap! When the referee said ‘mate’ it sounded like gold." 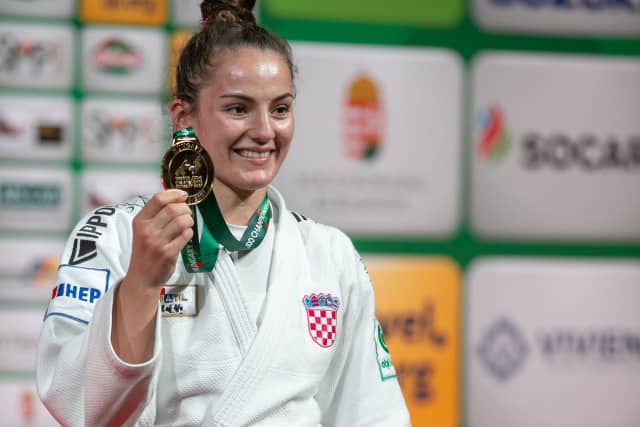 For the French delegation it was a cold shower day. Being world number one and current world champion, especially after her demonstration in Tokyo two years ago, GAHIE believed that it would be her day again, but things have not been going the way they should in recent months. Is it the pressure of the red backnumber, the stress of being on top, the tension of the Olympic qualification, which she didn't get, after the French Judo Federation preferred to send Margaux PINOT, who has had better results lately? The fact is that GAHIE has been far from her best and this was confirmed today.

The first bronze medal contest opposed the finalist of the last Tel Aviv Grand Slam, Miriam BUTKEREIT (GER) and the current European Champion, Sanne VAN DIJKE (NED). In less than thirty seconds, VAN DIJKE had taken a clear waza-ari lead with a maki-komi technique. She immediately followed on the floor but BUTKEREIT seemed to be in a position to pin her down. She still had to free a leg to get the osai-komi. That’s where things can go wrong, especially if you miss a small part of the required control and VAN DIJKE turned the German over to catch her for a few more seconds for a second waza-ari.

With several participations in the world championships but no result, it was a really good day at the office for Megan FLETCHER (IRL), who qualified for the bronze medal contest against Michaela POLLERES (AUT), bronze medallist at the 2020 Grand Slam Hungary. The two bronze medal contenders neutralised themselves for much of the match, with only one shido given to FLETCHER, but as they entered the last minute, POLLERES countered FLETCHER for a waza-ari and concluded on the ground with an immobilisation for ippon. With that first bronze medal, Austria enters the medal table. A nice welcome present for former Olympic champion and new head coach of the Austrian team, Yvonne BÖNISCH. 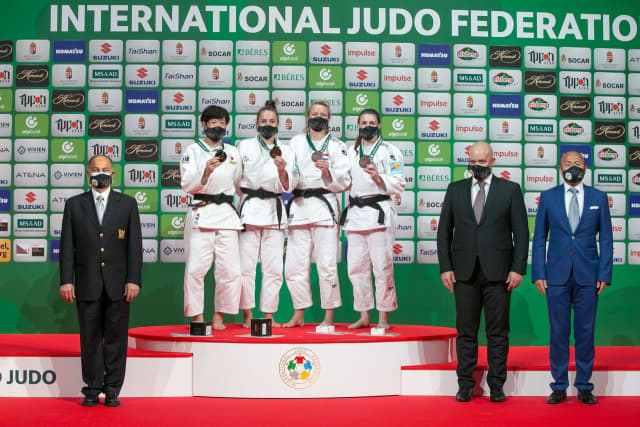 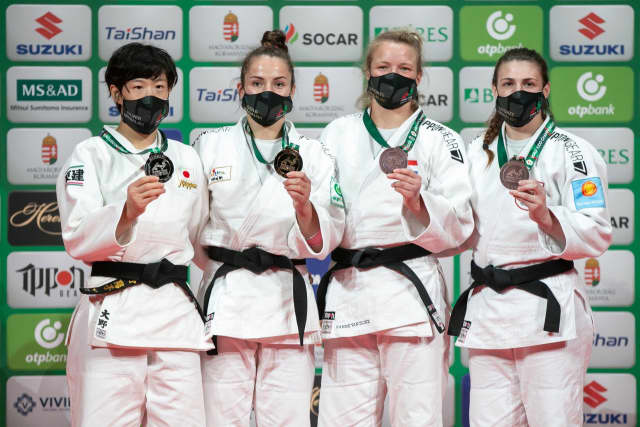 -90kg: SHERAZADISHVILI Doubles in Budapest When Nikoloz SHERAZADISHVILI (ESP) arrived in Budapest, he announced that he was ready and feeling good and today he proved it by reaching the second senior world championships final of his career, knowing that he won the last one. 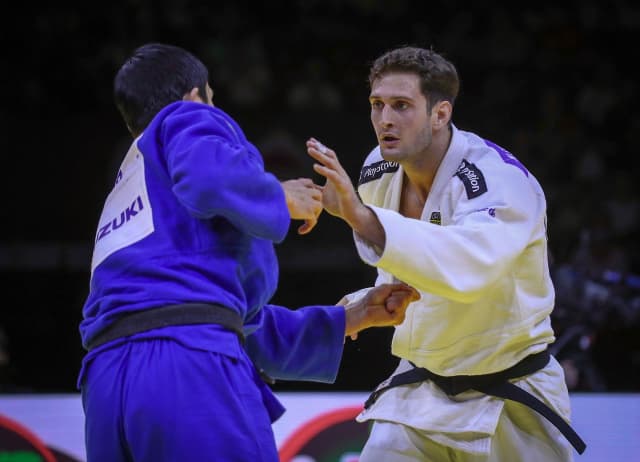 Top seed of the category, the 25 year old 2018 world champion had the perfect start, with wins against Faruch BULEKULOV (KAZ), Piotr KUCZERA (POL), Altanbagana GANTULGA (MGL) and Kenta NAGASAWA (JPN) in the semifinal. But it's not only that he won all his preliminary matches, he won them all by ippon without having to go use a golden score period. The tusri-goshi he applied to NAGASAWA was a piece of art. It's always impressive when an athlete knows exactly what he is capable of and he does it with style and precision. This is the mark of great champions, of which SHERAZADISHVILI is definitely one. 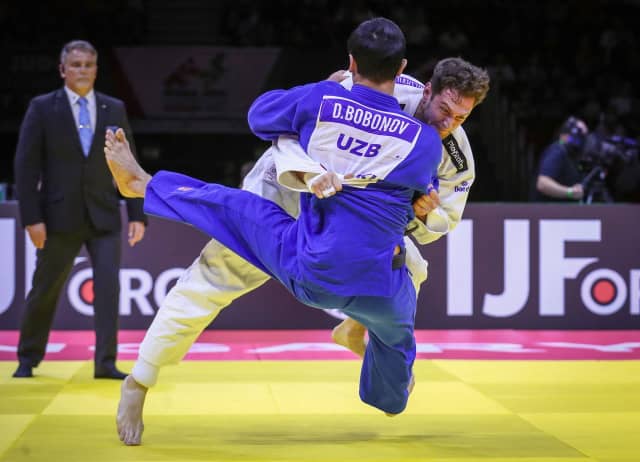 To face him in the final was Davlat BOBONOV (UZB), second in Tashkent and third in Tbilisi this year. The Uzbek protege of Ilias Iliadis had a tough first preliminary round against MURANO Sanshiro and was lucky, after having been thrown, to see his opponent disqualified for a dangerous technique. He then had two 'easier' rounds against Li KOCHMAN (ISR) and Islam BOZBAYEV, both matches won by ippon, before he faced the local hero, Krisztian TOTH, in the semi-final. The two men were separated by a single waza-ari after four intense minutes of judo, but that was enough for BOZBAYEV to join SHERAZADISHVILI in what was his first world championship final. 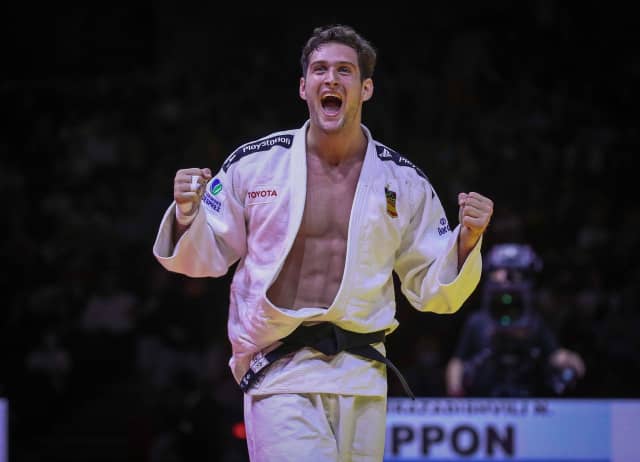 A first shido was given to BOBONOV for a wrong grip, while SHERAZADISHVILI received the next one for passivity. After a confused action, both went on the floor and SHERAZADISHVILI immediately pinned down BOBONOV but the Uzbek athlete escapted after 8 seconds. After the next sequence, SHERAZADISHVILI was penalised a second time. Golden score! The tension increased as BOBONOV was always attacking before SHERAZADISHVILI to prevent the Spaniard to launch his spectacular moves. Eventually, SHERAZADISHVILI engaged a o-uchi-gari that was like suspended in the air for a second, before he could finally put all his power to throw BOBONOV. Clear ippon for a second brilliant world title.

Nikoloz SHERAZADISHVILI declared, "Bobonov has one of the fastest seoi-nage attacks at -90kg. The plan was to use my strength to stop him in the first 2 minutes and then to go for him and finish the job. These are the best world championships in history for Spain."

Seventh at the World Judo Masters last January and third in Tbilisi on 26th March 2021, Altanbagana GANTULGA (MGL), qualified for the first bronze medal contest against Krisztian TOTH (HUN), who was in position to win the first medal for the host country and who was massively supported by a cheerful public. After one minute, the two athletes had been penalised with a first shido. Being one head shorter than his opponent, TOTH was trying to go under GANTULGA's center of gravity while the Mongol was waiting for the attack, which didn't really come. He was then penalised twice for passivity, while TOTH got only one shido. As the golden score started, the sound level in the arena raised dramatically. TOTH was pushing and attacking to give a third shido to GANTULGA, who kept looking for the hip throw. Every single action seemed to be on the edge to score, but both athletes were escaping like cats until the last sequence that put an end to this gladiator battle. GANTULGA received a third shido, TOTH won the first medal for Hungary. The champion left the tatami in slow motion. He had given all and was happily exhausted. This is medal number two for TOTH Krisztian in a world championships.

After his significant performance at the Antalya and Tbilisi Grand Slams, that he won one after the other, Marcus NYMAN (SWE), fifth at the Olympic Games and at the World Championships earlier in his career, met the second Japanese competitor in the category, NAGASAWA Kenta (JPN), winner of the Tashkent Grand Slam in March. The match concluded with a superb sumi-gaeshi performed by Marcus NYMAN, after twenty second in the golden score period, while only shido had been distributed during the regular time. This is first medal a the world championships for the Swedish athlete. 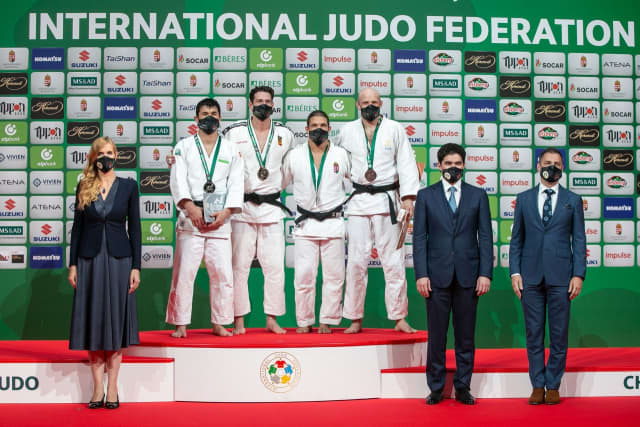 The medals, checks and Huawei gifts were presented by Ms Tünde Szabo, State Secretary for Sport of Hungary, Mr Azizjon Kamilov, President of the Uzbekistan Judo Federation and Vice President of the National Olympic Committee of the Republic of Uzbekistan and Mr Bence Tuzson, Minister of State for Political Coordination 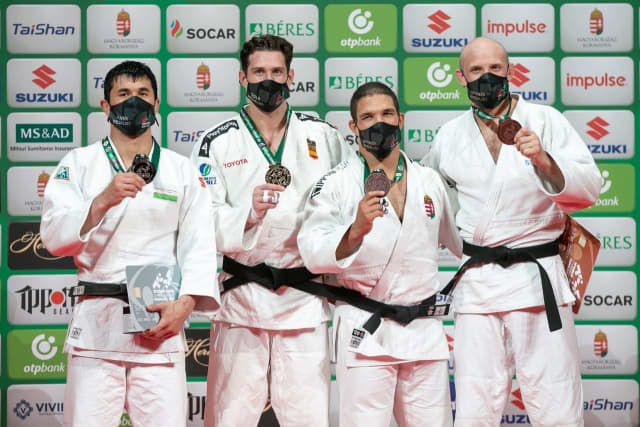