THE TRUE STORY OF A FIGHT FOR LIFE

Written by Nicolas Messner, Pedro Lasuen on 01. Sep 2019
Share
Saeid Mollaei (IRI) and Sagi Muki (ISR) were supposed to be the picture to mark history: Iran and Israel competing against each other and being present on the same podium at the World Judo Championships in Tokyo. For years, Iranian athletes have been prohibited from competing in any sport against Israel. From questionable injuries, to throwing matches, Iranian athletes across all sports have been ordered to crush their own dreams. 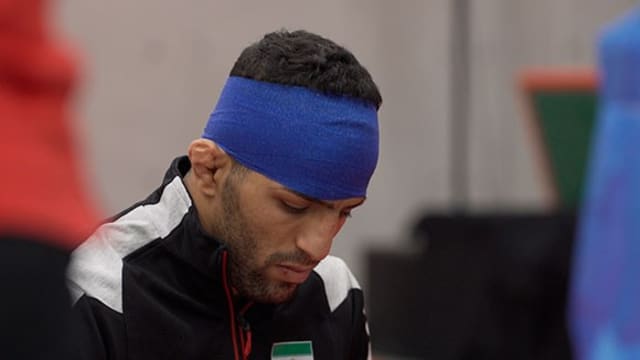 For the first time in modern history, all conditions were gathered for sport to triumph over politics. On May 9, 2019, the International Judo Federation received on official letter from the National Olympic Committee of Iran stating: “... we would like to confirm that the I.R. Iran NOC shall fully respect the Olympic Charter and its non-discrimination principle and the I.R. Iran Judo Federation shall fully comply with the Olympic Charter and the IJF Statutes..." (full letter: https://www.ijf.org/news/show/historic-agreement-reached-by-ijf-and-iran).

Moreover, we also had athletes, and especially World Champion, Saeid Mollaei (IRI), who was ready to face any opponent to defend his title.

It’s Wednesday, the 28th of August at the Judo World Championships in Tokyo. After the first rounds of the competition, everything seemed to go well for Mollaei who was going through the preliminaries with ease. From a spectator point of view, he definitely looked in the position to defend his title. Sport being sport and nothing being written in advance, Mollaei faced in the semifinal, Belgium Matthias Casse, who defeated the Iranian after a long and stressful match in golden score. On the other side of the draw, Sagi Muki (ISR) had the perfect day. At the end of the competition, Mollaei lost his bronze medal match finishing 5th place, while MUKI won the world title. Nothing to say, a normal day in the office. 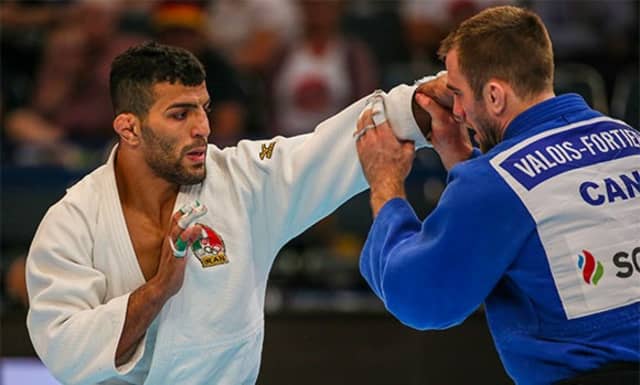 But beyond the spectators point of view, what people saw and the final results of the category, things did not happen the way they looked like. This is the true story of the drama that took place backstage of the Nippon Budokan. This is the story of how Mollaei fought for his life, due the pressure from his country's authorities.

As said before, both Mollaei and Muki debut the day effectively, eliminating all their adversaries by ippon. The increasing potential probability of a final between the two champions was getting higher after the third round.

The drama of this extraordinary true story began at 15.30, Japan’s time. Mollaeis’ next fight was against the Olympic champion, Russian Khasan Khalmurzaev. A few minutes prior to the contest, the Iranian coach received a call from his country. On the other side of the line, the Iranian first deputy minister of sport, Davar Zani, gave him the order to withdraw Mollaei from the competition to avoid a potential contest between Iran and Israel. A demand accompanied by a double threat against Mollaei and his family.

Mollaei literally collapsed, and burst into tears. The emotion was heartbreaking for those backstage who witnessed this.

Lisa Allan, IJF competition manager was approached by the coach from Tajikistan, Vahid Sarla informing her that Mollaei needs her help. Accompanied by IJF General Secretary Mr Jean-Luc Rouge, IJF EC member Mr Gerard Benone and her assistant Abdullo Muradov they went to him immediately and took action in a professional manner. 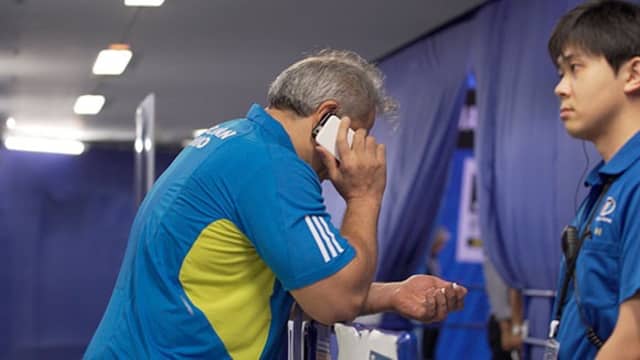 Abdullo said: “I spent the day with him. I escorted him everywhere. Helped him with translation. I saw the fear in his eyes, the terror of having to face the consequences of a situation that was beyond his control. He was totally helpless. It's terrible to witness this. These are situations that should not happen for any athlete or for anyone.”

The Champion asked to meet IJF President, Marius Vizer, who immediately welcomed him in his office. After hearing what had occurred, Mr. Vizer assured him of his full support regardless of his choice.

Mr. Vizer explained to him, that he had to make the most important decision of his life. Obey and return to his country or risk everything and fight for freedom and dignity. His Judo values showed him the way. He made his choice and rushed directly to the tatami to face the Olympic Champion.

The emotional stress created by this extraordinary situation was surely not the best way to prepare a contest, especially against an Olympic Gold Medalist. Mollaei proved to be a stratospheric champion by eliminating the Russian, and also winning his next contest against the Canadian Antoine Valois-Fortier, Olympic bronze medalist in the quarterfinals.

Despite early declarations by some media that he withdrew due to head injury, the Iranian continued to compete, reaching the semi-final against Matthias Casse with hope to enter the final. For the Iranian authorities, Mollaei had already gone too far. Having received several calls all day to pressure him, there was already no turning back and he knew that he couldn't go home. Moreover, a delegation from the Iranian Embassy came to the venue. One delegate illegally, by means of the Iranian coaches accreditation, trespassed into the athlete warm up area to approach him with messages of intimidation.

Just prior to the semi-final, Mollaei’s coach received another phone call, this time from the Iranian Olympic Committee President, Reza Salehi Amiri. He put the phone on speaker and video, so the World Champion could follow the conversation. 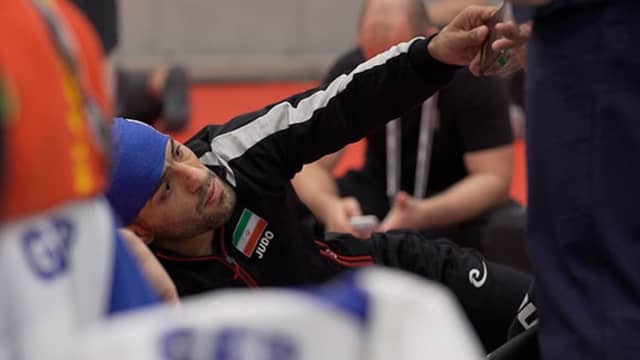 The NOC President explained that National Security were at his parent’s house. Mollaei’s friends from Iran also texted him that people came to his house and asked his father to tell his son to follow the law or he would have problems.

The fear, the emotional heights that the Iranian reached at that precise moment, and the time that had passed since the preliminaries, put him in an incredible state of stress. Escorted everywhere by IJF and local organizing staff, his belongings and passport being secured, he went on the mat for his semifinal but revealed after the competition, that he couldn’t compete at his normal level.

In an exclusive interview given by Saeid Mollaei to the IJF media he declared: “I could have been the world champion. I’ve been training hard, making lots of efforts. Today, I fought and won against an Olympic champion, an Olympics bronze-medalist and other opponents. I beat all of them. I even dreamed of the championship title today. But that was not my fate: I could not compete because of the law in my country, and because I was scared of consequences for my family and myself.”

Mollaei explained: “Today, the National Olympic Committee of Iran and the Sport Minister told me to not compete, that I had to comply with the law. I am a fighter. I want to compete wherever I can. I live in a country whose law does not permit me to. We have no choice, all athletes must comply with it. All I did today was for my life, for a new life.”

“I thank Mr. President Vizer from the bottom of my heart. He told me he would guarantee and help me to go to the Olympics. So that my dream will come true and I can become an Olympic champion. I need help. Even if the authorities of my country told me that I can go back without any problems, I am afraid. I am afraid of what might happen to my family and to myself." 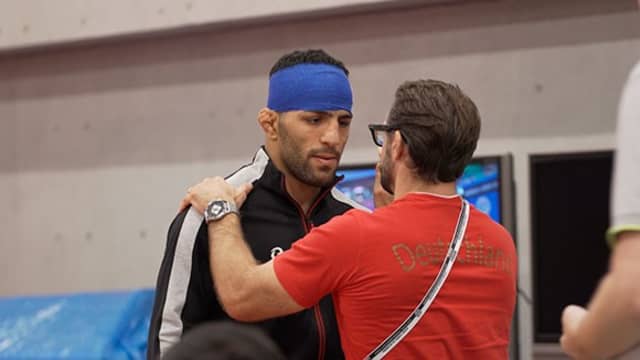 “President Vizer guaranteed that I can continue to compete. I am an athlete, not a politician nor been ever involved in politics. I want to comply with the Olympic Charter.“ Saeid Mollaei concluded: "I was lost and afraid.“

Today he cannot return to his country and awaits a life of exile and uncertainty regarding the future of his family. All he wanted was to be a judoka and become a champion, to represent his country with pride in international competitions, face the best and give his best, like everyone else and play fair. Mollaei lost a competition in Tokyo but he chose judo and won the contest of his life, by Ippon.

Saeid Mollaei is currently under risk and the IJF is looking forward to find the best solution to allow a champion to continue to do what he does best: to compete no matter what and without any kind of discrimination.

His fight for life has just started. He won’t be alone, the whole judo family will stand next to him.

President Vizer said “The IJF is never in favor or against any country, we are here to defend the integrity of the sport and the sport values for the promotion of sport as a driver of friendship, unity and peace in the world. The Olympic Charter is the supreme value in the sport and we are here to protect it.”

President Vizer will host a Twitter Q&A at 17:30 Tokyo