There Was Magic In Morocco

Written by Nicolas Messner on 23. Nov 2021
Share
On 11th November a 'Judo for Peace' delegation left Israel for Morocco. This was the first youth delegation to arrive from Israel in Morocco since the resumption of official relations between the two countries. The dream of launching such an initiative began to materialise immediately after the normalisation between Israel and Morocco was signed.

Two years ago a similar delegation went to France for the 2020 Paris Grand Slam, but as the Covid crisis hit the globe, the dream of sending a delegation to another destination was delayed.

The delegation consisted of 8 Jewish children from Jerusalem and 8 Arab children from Abu Ghosh, who practise in the Israeli Judo in Schools programme.

The delegation was accompanied by the president of the Israeli Judo Association (IJA), Mr Moshe Ponte, the Chairman of the Abu Ghosh Council, Mr Salim Jaber, the Head of the Community Sports Directorate in Abu Ghosh, Mr Muhammad Issa Jaber, the IJA Deputy Director General and the Judo in Schools project manager, Mr Eliran Malca, the project initiator, Mr Yoel Libster and the representative of the Beit Esther Association, Mr Meir Russo.

Nothing would have been possible without the strong implication of the Essaouira-Mogador Association under the leadership of Mr Elhoussin Oueslati, who took the first contacts and organised the logistics together with all the stakeholders. This made possible the smooth organisation of the whole journey.

Upon landing in Marrakech, the delegation was greeted with the warmth and smiles from the representative of the Moroccan Judo Association, Ms Amina Zanir.

The first judo training session was held at the Flam Morocco Judo Club and caught positive media attention immediately. The delegation was also invited by the President of the Moroccan Federation, Mr Chafik Elkettani, who hosted the generosly, while the children received small souvenirs from Morocco.

In Casablanca they had the chance to participate in a session at the Club ABS Dojo Academy. Another judo class took place in Rabat at the Al Assad Association, which was attended by the Israeli Deputy Ambassador to Morocco, Mr Eyal David. 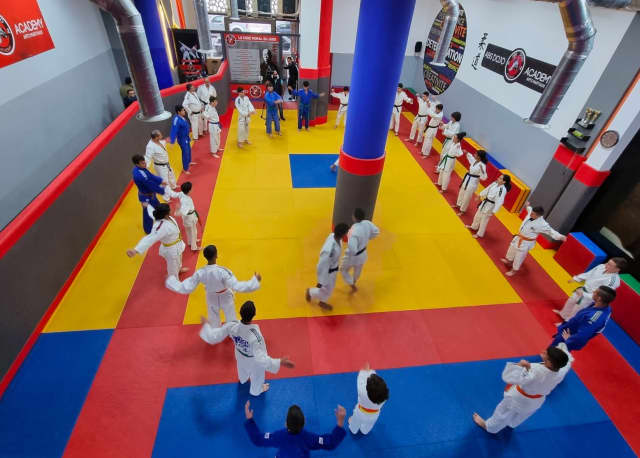 The last judo session was held in Essaouira and also offered the opportunity to organise a friendly competition between all the participants. The Mayor of Essaouira, Mr Tarik Ottmani and Kaoutar Chakir Benamara, the General Secretary of the Essaouira Mogador Association were present.

President of the Israeli Judo Association Mr. Moshe Ponti said, "I want to thank Mr. Chafik Elkettani who hosted us and took care of us from the moment we landed. This is a welcome project; the first training with local athletes in Marrakech was super exciting, as well as all the other sessions and social gatherings. Local and large TV channels from Morocco came to cover the events. I see that what is happening here caused a great echo not only in Israel. All the judo sessions were attended by the parents of Moroccan athletes and it was really exciting and made me understand that we are not only doing competitive judo but also bringing the hearts of the Jewish and Muslim communities closer together and this is something huge.” 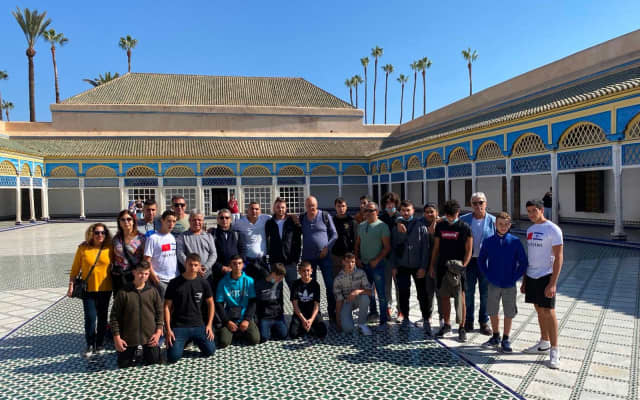 The President of the Moroccan Judo Federation, Mr Chafik Elkettani said, "We were very happy to host the Jewish-Arab delegation from Israel. This is a first collaboration marking the renewal of relations between Morocco and Israel. It shows that we are sharing the same sporting values.

There was a double interest. On the one hand the Jewish and Arab communities of Israel can get to know each other better and on the other hand that they are able to come here to Morocco to also discover our country, our traditions and our open-mindedness. 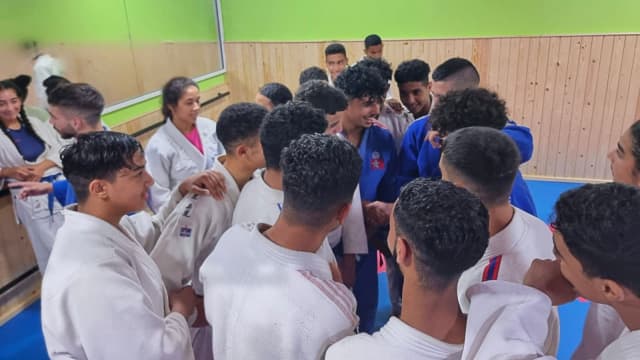 You should know that the second largest Moroccan community abroad, after France, is in Israel. Relations between our two countries are long-standing. Even President Ponte was born in Casablanca.

This stay, which was made possible by the immense work carried out by our two federations and I thank them for it, was very convivial.

Judo has brought together a lot of people and we can be very proud of it. We are going to get even closer to the Israeli Federation and strengthen our cooperation for the benefit of judo but it goes beyond sport. Morocco has always been a country of unification and peace and I believe that peace is being built in all directions. The Jewish community is an integral part of the Moroccan constitution. We have many cities like Tetouan, Essaouira and Marrakech in which the mosque is next to a church and a synagogue.

Since the diplomatic rapprochement between our two countries, it was the first meeting of two official structures of Morocco and Israel. It was judo that made this possible. Sport must and can be a vehicle of peace. It is our role to ease tensions. The Moroccan media were included and so the echo of this trip goes beyond the borders of the kingdom. We will continue on this path in partnership with the International Judo Federation and the Israeli Federation."

Israeli Judo Association Deputy Director General and the Judo in Schools project manager Mr Eliran Malca, explained, "Two years after we were with the first delegation at the 2020 Paris Grand Slam, this trip was very exciting for me and for the members of the delegation. I am glad we managed to make this dream a reality. The people we met during this journey have opened so many doors for us and I'm sure we'll soon hear about the next project. These children are our future and if we don’t succeed in bringing the first steps for peace, then I am sure that through judo they will be the ones who will succeed."

In a world in constant turmoil in which bad news is omnipresent, the event which took place last week in Morocco is to be put in the camp of the initiatives which make it possible to positively reinforce bonds between people. 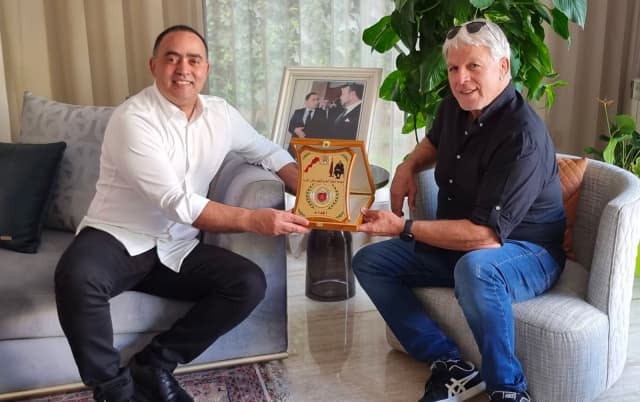 "While it was more difficult in the past, this time we were welcomed to Morocco for an open and complete cooperation, which is planting seeds for the future. A big thank you to everyone who made this possible. I am delighted with the project and happy that the young people are involved,” added Moshe Ponte.

Mohamed Jaber, Director of the Abu Ghosh sports department, also commented, "We took the initiative within the sports department of the Abu Ghosh Community Centre to organise the first joint judo missions between Arabs and Jews. This is the continuation of the Judo for Peace and the Judo in Schools programmes initiated by the International Judo Federation. The purpose of such a stay was to strengthen relationships and exchange of experiences between young people. Through this mission, we plan in the future to renew growing relations with other brotherly countries. We hope that this mission can be a model for other nations and people so that we can achieve our ultimate goal, which is to establish peace and a harmonious life in a better world." 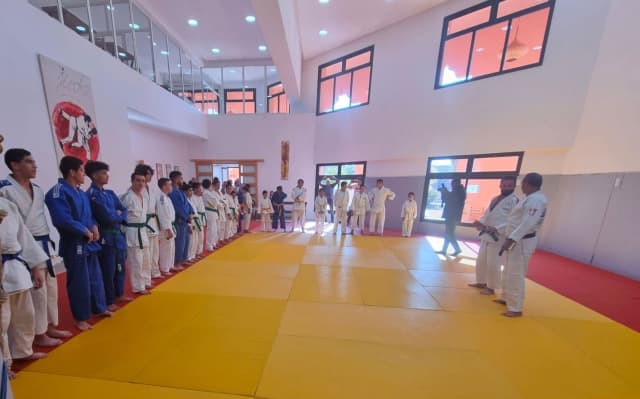 Uday Jaber, one of the young participants from Abu Ghosh said, “We were very excited to come to Morocco, our experience was special. Already in Israel we connect very much with the Jewish children and when we arrived in Morocco the connection only grew. We slowly understand that what we do is really big and everyone talks about it."

His teammate Eitan Busheri from Jerusalem added, "We were constantly told that we were going to make history, but only when we arrived in Morocco and saw the warm and exciting reception, we realised that this is something huge. As young boys we want to connect Jews and Muslims through sport and not politics." 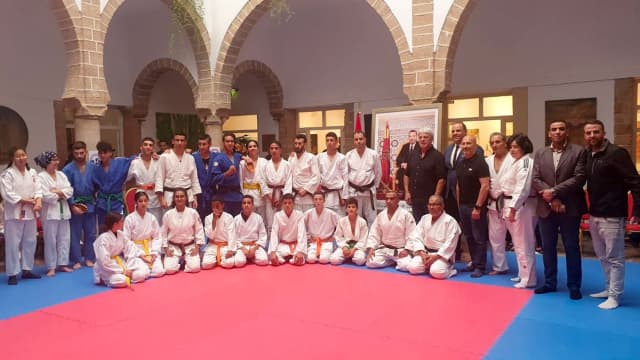 The stay ended in Essaouira, in an incredible atmosphere. During the friendly interclub meeting, the young Moroccan judoka of the local associations made new friends among the members of the Israeli group.

It was a strong moment of reflection on the universal values that judo and sport in general can promote: friendship, respect, loyalty, sharing, hospitality, dialogue and politeness. These are values that bring all people together, regardless of their country, culture and religious beliefs. There was some magic in Morocco, real magic!