Written by Mark Pickering on 26. Aug 2019
Share
After missing top spot on day one, hosts Japan fought back and claimed both titles on day two of #JudoWorlds at the Nippon Budokan. 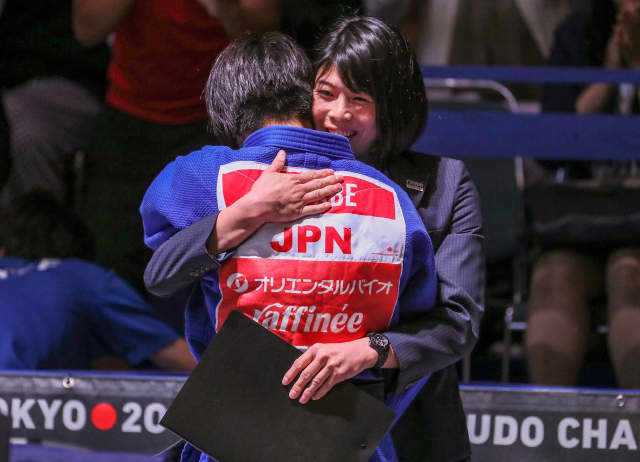 Klaus Glahn (born 23 March 1942) was honored today with the 9th dan, presented by the IJF President, Marius Vizer, just prior to the final block of day 2 of the World Judo Championships. Klaus Glahn is a retired West German judoka who competed when judo was first introduced in the Olympic programme in 1964, at the Nippon Budokan. On this occasion, he won a bronze medal in the open weight category while representing the United Team of Germany.

Eight years later he won a silver medal for West Germany in the heavyweight category. Between 1967 and 1973, Glahn won five medals at world championships in the heavyweight and open divisions. He also won three European heavyweight titles, in 1963, 1968 and 1970. In the 80s (1985-1988) he became president of German Judo Federation, before entering a political career in Germany. 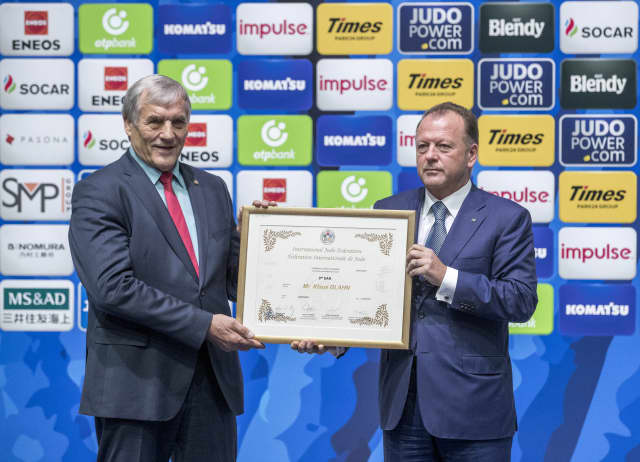 Wonderkid ABE Uta (JPN) ruled the world for the second time as the poster girl for the World Championships emphatically defeated Olympic bronze medallist Natalia KUZIUTINA (RUS) to win gold at home. Livewire ABE was irresistible in the final as she launched KUZIUTINA with a sode-tsurikomi-goshi after only 30 seconds for ippon and for the biggest ovation from the near capacity crowd of the competition so far. The teenager, who had just seen her brother lose his world crown after his semi-final defeat, extended her winning run to 42 contests in a row and remained unbeaten since 2016 in international competition. 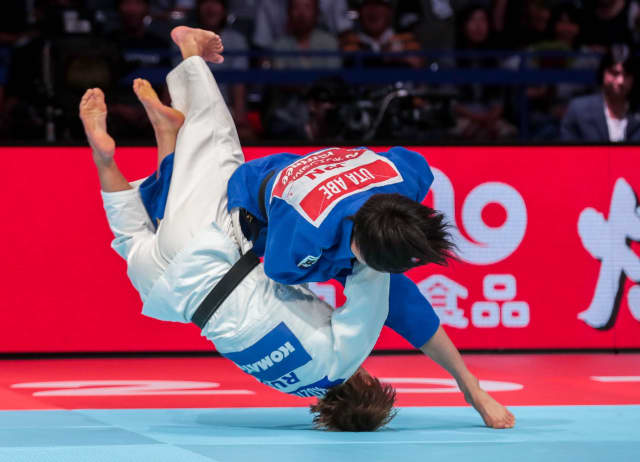 In the first semi-final ABE won the long-awaited dream clash with Olympic champion Majlinda KELMENDI (KOS) in golden score. Both judoka received penalties early on as they made a nervy start which could be attributed to the scale of the contest and the occasion. The two revered champions went toe-to-toe for four minutes and there was nothing to separate them and so golden score was required which upped the level of drama even more. The red backpatch of ABE prevailed over the gold backpatch of KELMENDI as the youngster had a sense of an opening on the ground while the double world champion had anticipated the referee calling a stop to the action. However, ABE was still manufacturing an opportunity and never stopped working as she managed to turn over her rival and then freed her leg to apply the osaekomi in the form of a yoko-shiho-gatame for 20 seconds and ippon. Chapter one belongs to ABE but there will be many twists and turns before Tokyo 2020 and hopefully many more meetings between the two champions over the next 12 months. 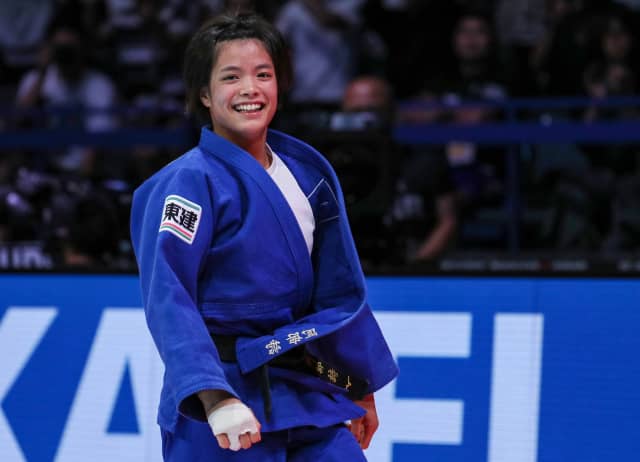 In the second semi-final world number one Amandine BUCHARD (FRA) fell to KUZIUTINA who used all of her experience and nous to see off the Frenchwoman. KUZIUTINA countered BUCHARD as she picked up the top-ranked -52kg judoka and lifted her up and over for a waza-ari score which was correctly allocated after being reduced from a ippon score upon a video review. Smooth and professional, Olympic and former world bronze medallist KUZIUTINA showed her quality to take a deserved place in the final having won three bronze medals on this stage previously.

In the first bronze medal contest KELMENDI beat two-time Grand Prix winner Joana RAMOS (POR) to return to the World Championships podium for the first time since 2014. RAMOS, 37, matched her 2011 result of fifth-place on the Worlds stage after being disqualified for receiving three shidos but steers her towards Tokyo 2020 qualification while KELMENDI will have some relief at being back amongst the World medallists and will look to make adjustments before her next encounter against ABE Uta.

In the second bronze medal contest BUCHARD lost out to former world champion SHISHIME Ai (JPN) who won her third World Championships medal in a row and first bronze. The 2017 winner and 2018 silver medallist claimed bronze today after dropping under her French foe for a waza-ari and pinning down her rival with a kata-gatame for 10 seconds and a spot on the podium. 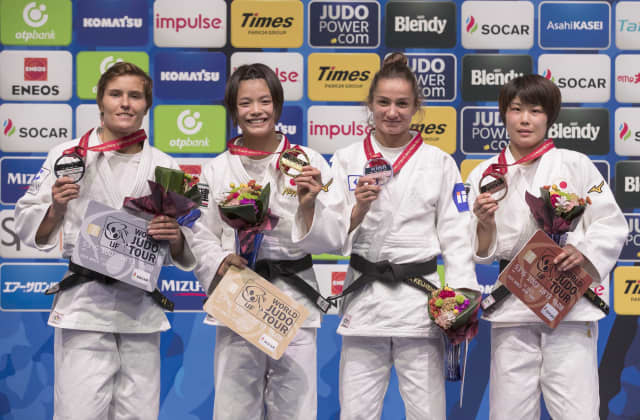 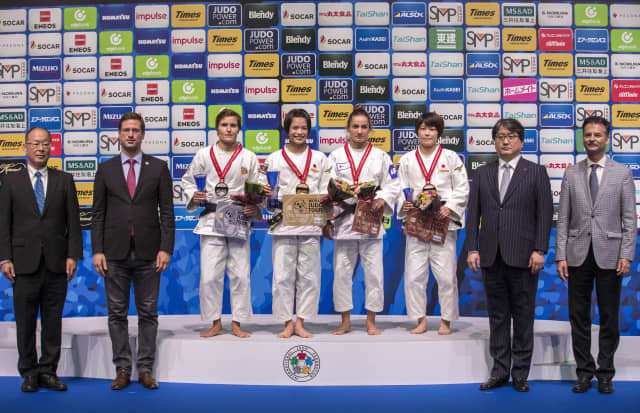 -66kg: MARUYAMA beats ABE on his way to Worlds victory at the first attempt

World Judo Masters winner MARUYAMA Joshiro (JPN) confirmed himself as Japan’s number one and the best -66kg judoka in the world by beating world number 29 KIM Limhwan (KOR) to take pole position in the race for Tokyo 2020 selection. The world number two threatened several times with his picturesque uchi-mata and, while the warning signs were already there, KIM could not evade successive attempts from the protégé of 1984 Olympic champion and former world champion HOSOKAWA Shinji. MARUYAMA scored twice in quick session in the final minute with his inner-thigh reaping technique to seal a day two double for the hosts and the inauguration of the new face of Japanese men’s judo. 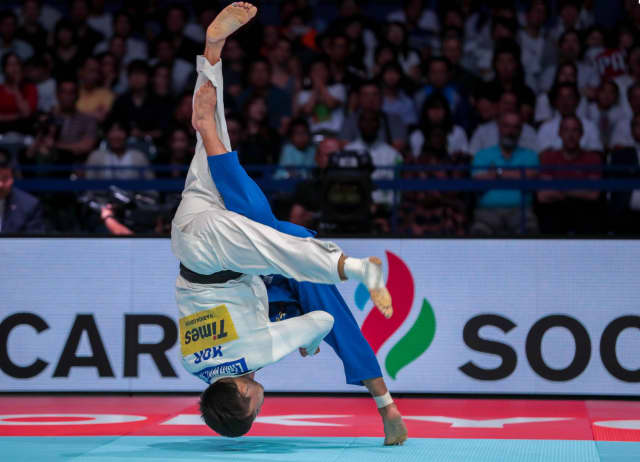 In the first semi-final MARUYAMA beat two-time and defending world champion ABE Hifumi (JPN) in an World Championships epic. Tenri University judoka MARUYAMA made a slow start and appeared to be suffering from cramp in his fingers before he began to limp briefly. As the contest continued the challenger was not backing down and, as the adrenaline took over, even tried to employ his usually potent uchi-mata with 30 seconds left. Golden score was needed to produce a winner and ABE, who could barely see out of his right eye, was caught with a yoko-otoshi after three minutes and 46 seconds, for a waza-ari score to end a semi-final blockbuster. 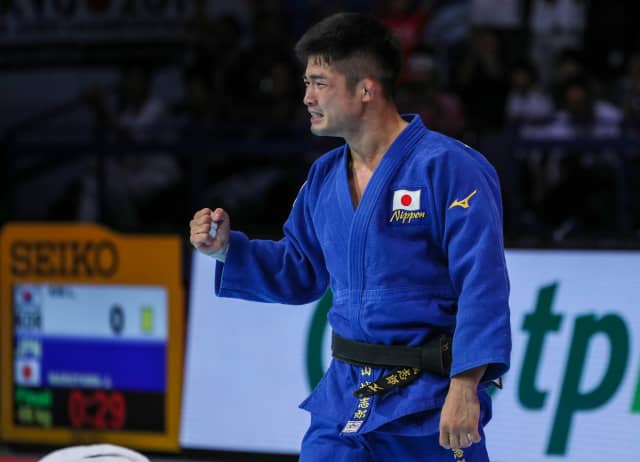 In the second semi-final the unheralded KIM was up to his magic again as he disposed of Baku Grand Slam winner Denis VIERU (MDA) with a textbook, reaching o-uchi-gari for ippon and an unexpected place in the final.

In the first bronze medal contest Tel Aviv Grand Prix winner Manuel LOMBARDO (ITA) lost a back-and-forth battle against ABE as both men left it all on the mat. ABE thought he had won it when he appeared to produce a buzzer-beating waza-ari score but it was overturned and golden score was summoned. LOMBARDO, who beat ABE in Paris, could not climb off a hip throw from the Japanese star who prevailed by ippon before his younger sister was shown on the big screen clapping from the athlete tunnel.

ABE let his emotions pour out after leaving the mat after the most physically and mentally demanding day of his life. Smarting from his semi-final defeat, relieved to win bronze, exhausted and no doubt in pain both physically and emotionally, the Japanese superstar took a deep breath before leaving the field of play and putting on a brave face for the media.

In the second bronze medal contest VIERU won a deserved medal for Moldova as he beat Hohhot Grand Prix bronze medallist YONDONPERENLEI Baskhuu (MGL) after 17 seconds of golden score. The in-form world number five earned his first medal on the Worlds stage by picking up the Mongolian with a front uchi-mata which is actually a common technique from the Mongolian team. Both judoka have recently established themselves as forces in the division and will be backed as contenders next year at the Olympic Games. 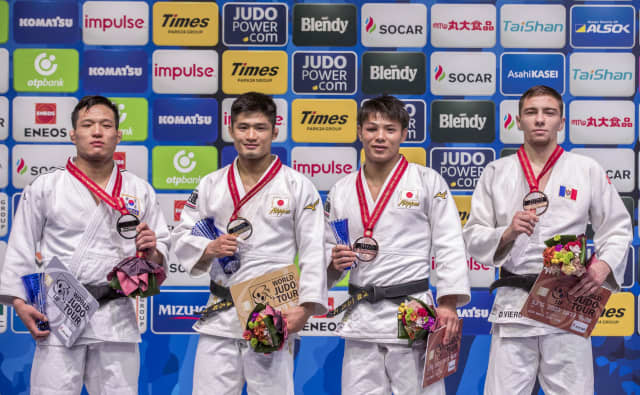 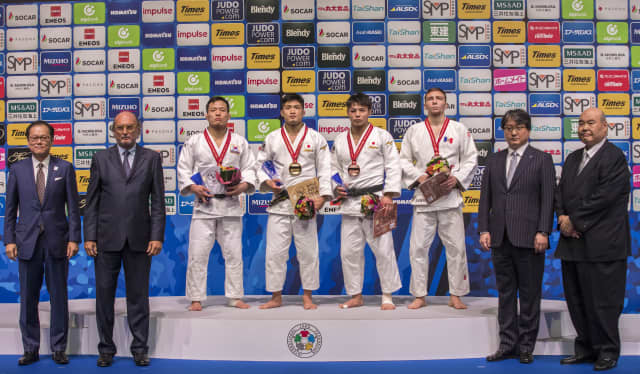 Watch day three of #JudoWorlds from 10am Japan time on Tuesday

Interview: Sally Conway
It Was a Year Ago But it’s All About Today