Written by Mark Pickering on 23. Sep 2016
Share
The Zagreb Grand Prix 2016, the first Grand Prix of the new Olympic cycle, opened on Friday with new names cast forward into the spotlight on the IJF World Judo Tour stage at the Dom Sportova.

The first IJF event following the Rio 2016 Olympic Games starts a new chapter for the sport as attention turns to judo’s homecoming at Tokyo 2020 but also the annual World Championships in 2017 (Budapest, Hungary), 2018 (Baku, Azerbaijan) and 2019 (Tokyo, Japan).

Croatia’s fourth IJF Grand Prix, the third in the capital city following an inaugural edition in Rijeka in 2013, started with five weight categories engaged on the two tatami as 81 judoka ( 42 women, 39 men) were out to win the first IJF honours in the second half of the IJF World Judo Tour 2016. 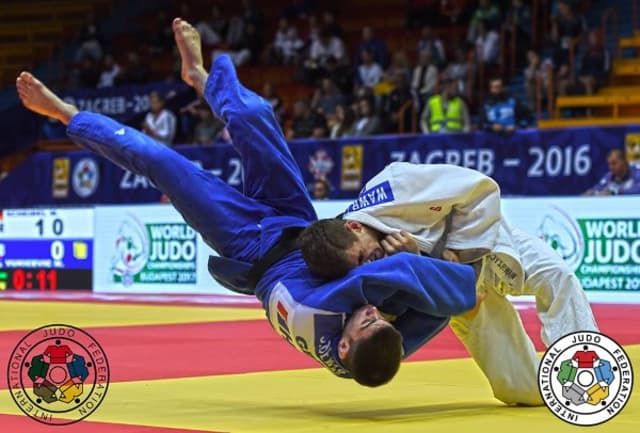 France made a flying start in Zagreb as they won two gold medals and two bronze medals to control the medal table from the outset and they will undoubtedly add to that tally on the coming days. Slovenia are second with one gold medal, one fifth-place and one seventh-pace ahead of Poland and Serbia who also struck gold.

Croatia’s women came closest to the podium as the hosts produced one fifth-place finish and two seventh-place finishes but can look forward to two more days of home competition as their plentiful ranks will include the MATIC sisters Barbara and Brigita who will campaign at -70kg and -78kg respectively.

Day two will see four weight categories in action at the Dom Sportova as the men’s -73kg and -81kg categories will be joined by the women’s -63kg and -70kg categories.

Tyumen Grand Slam bronze medallist Milica NIKOLIC (SRB) became the first Zagreb Grand Prix 2016 gold medallist as she defeated Tallinn European Open gold medallist Noa MINSKER (ISR) to secure her maiden IJF title. NIKOLIC is part of a nine-strong Serbian team in Croatia and gave her team an ideal start as she threw MINSKER for ippon with an ouchi-gari after exactly 80 seconds and will now be waiting patiently for the new IJF World Ranking List to be released on Monday after picking up 300 points. 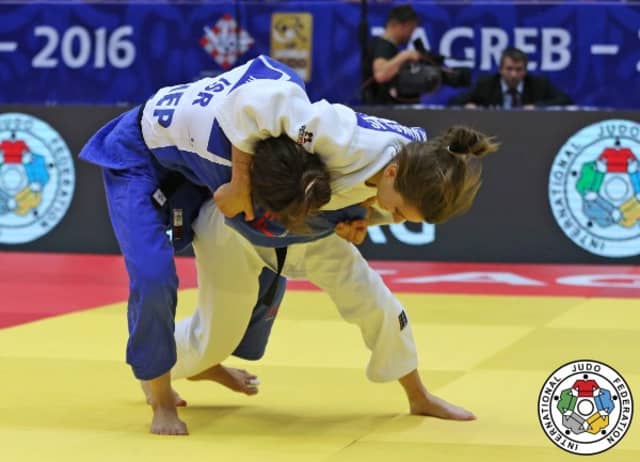 In the first semi-final NIKOLIC surpassed Orenburg European Cup winner Anastasia PAVLENKO (RUS) by waza-ari awasette-ippon with two minutes left of the regulation four minutes. In the second semi-final MINSKER, who produced a beautiful ippon seoi-nage to defeat home fighter Sara MATIJEVIC (CRO) in the first quarter-final of the competition, countered an uchi-mata from Tallinn European Open runner-up Ewa KONIECZNY (POL) after 26 seconds of golden score for a match-winning waza-ari as her coach Shany HERSHKO jumped out of his chair in celebration.

The first bronze medal contest was won by 20-year-old German European Cup bronze medallist Cheyenne MOUNIER (FRA) who could become France’s number one at this weight. The youngster defeated KONIECZNY after six seconds of golden score as what both judoka failed to achieve in the regulation four minutes, in threatening the scoreboard, MOUNIER instantly accomplished in added time with a sode-tsurikomi-goshi for a yuko score.

The second bronze medal was won by 25-year-old IJF World Judo Tour debutant Fjolla KELMENDI (KOS), the cousin of Olympic champion Majlinda KELMENDI, who stylishly defeated PAVLENKO. The Kosovo judoka was making her return to the competition after four years away from the sport where she focused purely on her academic studies. KELMENDI was cheered on by her heroic cousin – who at the end of the day came to the tatami in her judogi for a special session with young judoka – and took the lead with a yuko from a tani-otoshi before making sure of victory with one second left as she countered the Russian with a osoto-makikomi and screamed with delight as she started her IJF career with a fine performance. 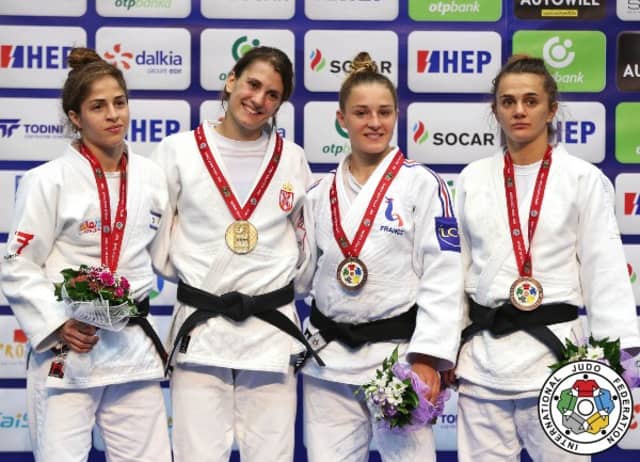 Budapest Grand Prix bronze medallist Karolina PIENKOWSKA (POL) won her first IJF title with an efficient performance which culminated with a win against Junior world champion Distria KRASNIQI (KOS). PIENKOWSKA, who had only graced an IJF medal podium once before at the aforementioned event, was the surprise winner as she countered a ouchi-gari attempt from KRASNIQI who failed to commit to the attack and was caught with ashi-waza for a yuko score. The 20-year-old from Kosovo, the long-time understudy to Olympic and double world champion Majlinda KELMENDI (KOS), lost out as the tactically astute Polish judoka flirted with danger as she was passive and unwilling to attack but the clock ran out on the former who ended with silver and her country’s second medal on day one. 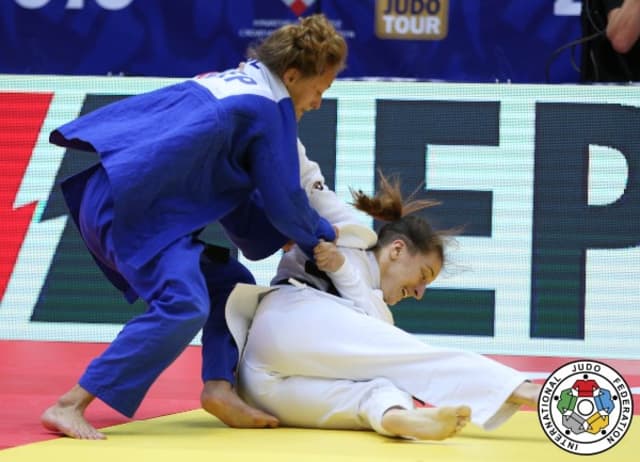 In the first semi-final KRASNIQI rushed past Budapest Grand Prix bronze medallist Larisa FLORIAN (ROU) in just 14 seconds as she submitted the Romanian with shime-waza to advance to the gold medal contest. In the second semi-final Rio 2016 Olympian Angelica DELGADO (USA) fell to PIENKOWSKA (POL) by ippon from a tomoe-nage.

The first bronze medal was clinched by Pan American Championships bronze medallist DELGADO in a thoroughly entertaining contest against Tyumen Grand Slam bronze medallist Tena SIKIC (CRO) which went down to the final second. DELGADO started a new quest for the Olympics by winning her first IJF medal as she scored a waza-ari from a sensational sasae-tsurikomi-ashi and followed through into osaekomi for a yuko but home judoka SIKIC showed her spirit as she crucially escaped after 14 seconds when one second later would have given the American victory. Miami’s DELGADO went back to her previous technique but this time it was well scouted by SIKIC who countered for a waza-ari of her own and piled on the pressure in the closing seconds but time ran out on her bid for a home medal.

The second bronze medal was won by London 2012 Olympian Kelly EDWARDS (GBR) who floored FLORIAN with a must-see drop seoi-nage which sent the Romanian hurtling through the air and flat onto her back for the maximum score. EDWARDS missed out on qualification for Rio 2016 after an injury-ravaged qualification campaign but has now won IJF silverware for the first time in her career at her first attempt in this cycle and will hope to for more of the same as she targets Tokyo 2020 and major honours. 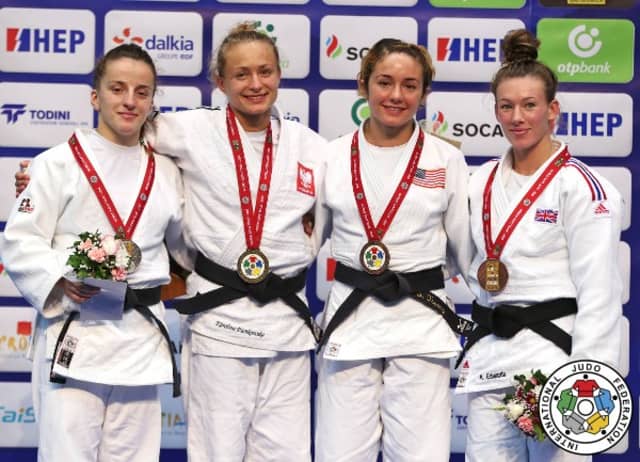 Madrid European Open winner Lola BENARROCHE (FRA) defeated Tyumen Grand Slam silver medallist Daria MEZHETCKAIA (RUS) in the -57kg final in the last contest on day one in Zagreb. BENARROCHE had never medalled on the IJF stage but that was not evident today as she looked comfortable under the gaze of IJF World Judo Tour and every single movement was calculated. The former Junior World Championships bronze medallist from Russia was aiming to win her first gold medal on the IJF circuit but BENARROCHE had other ideas as she broke the deadlock with a yuko from a tani-toshi and added a second score six seconds from time with a osoto-gari as the winner showed her best judo to top the podium for in-form France. 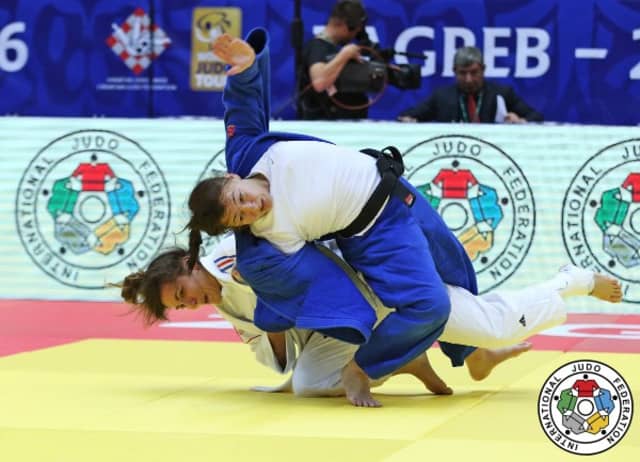 In the first semi-final Tallinn European Open silver medallist Bekky LIVESEY (GBR) was held down by BENARROCHE for 15 seconds as she lost out by waza-ari awasette-ippon. In the second semi-final MEZHETCKAIA won an all-Russian duel against Tyumen Grand Slam bronze medallist Natalia GOLOMIDOVA (RUS) via uchi-mata.

The first bronze medal was won by GOLOMIDOVA who swept aside Warsaw European Open silver medallist Sappho COBAN (GER) with ease. The 22-year-old German had been in this position twice before and on both occasions finished fifth at Grand Prix and achieved an unwanted hat-trick today as GOLOMIDOVA graced the IJF Grand Prix medal podium at her first attempt. The Russian chalked up three yuko scores and was registering at will as COBAN was off the pace with no sign of her trademark uchi-mata. A fourth and final score came just before the time elapsed in the form of a waza-ari from ashi-waza as GOLOMIDOVA comprehensively captured bronze. 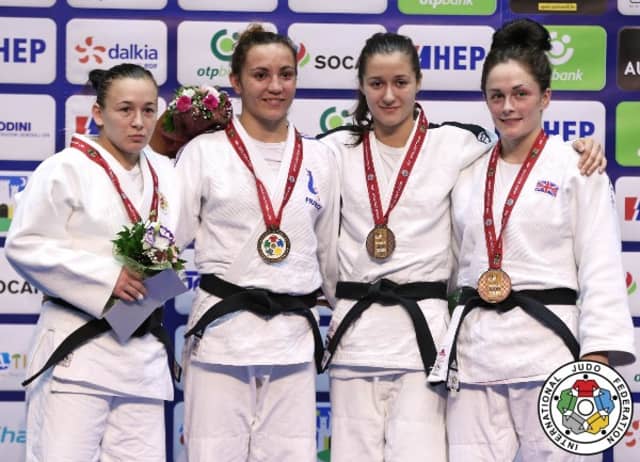 Both judoka were confident of wearing IJF gold for the first time but the Russian was never a threat in the final as MANQUEST brilliantly executed a juji-gatame after just 66 seconds which forced the former to submit and concede the title. MSHVIDOBADZE has not fulfilled his potential and at 27 will find international starts hard to come by now among the stacked Russian squad while MANQUEST is only 22 and will see this win as the turning point in his career at the elite level. 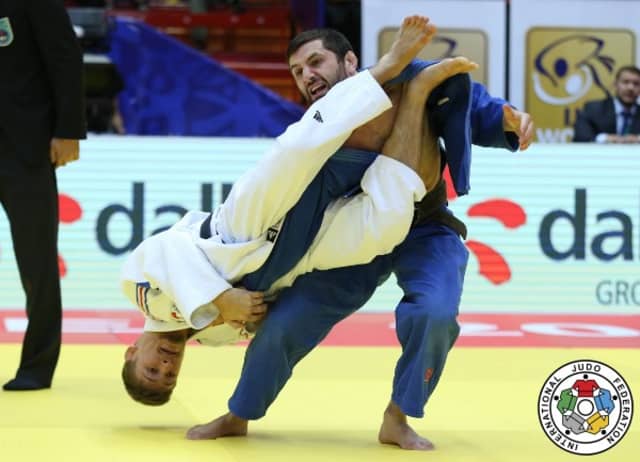 The first bronze medal was won by Budapest Grand Prix bronze medallist Cedric REVOL (FRA) who controlled GRAF for all five minutes as France continued their flying start to day one. The 22-year-old Frenchman went ahead with a low right-sided ouchi-gari and added a waza-ari with an ippon seoi-nage with just under two minutes remaining. GRAF could not find a route back into the contest as he was second best and had to settle for fifth-place in Croatia.

The second bronze medal went to GOMIS who claimed a first IJF medal by who by defeating Taipei Asian Open winner Matjaz TRBOVC (SLO) with a neat piece of shime-waza. TRBOVC, who finished fifth at the Rijeka Grand Prix in Croatia in 2013, thought he was able to withstand the pressure but the Spaniard tightened his grip and the Slovenian had to tap out. After securing the best result of his career in just 51 seconds in the final block, GOMIS burst into tears and fell to his knees as he showed how important this part of the Olympic cycle is to emerging judoka. 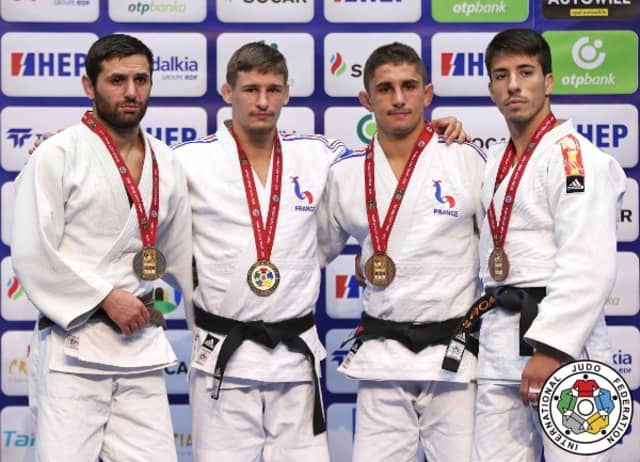 Ulaanbaatar Grand Prix bronze medallist Andraz JEREB (SLO) won Grand Prix gold in his first final at this level as he narrowly defeated former Junior World Championships bronze medallist Baruch SHMAILOV (ISR) in a highly-competitive gold medal contest. JEREB and SHMAILOV matched each other for four minutes and 51 seconds until the Slovenian countered the Israeli as he rolled him over for a yuko score which was the decisive action as the late score gave JEREB a golden glow and offered his country their first medal in Zagreb. 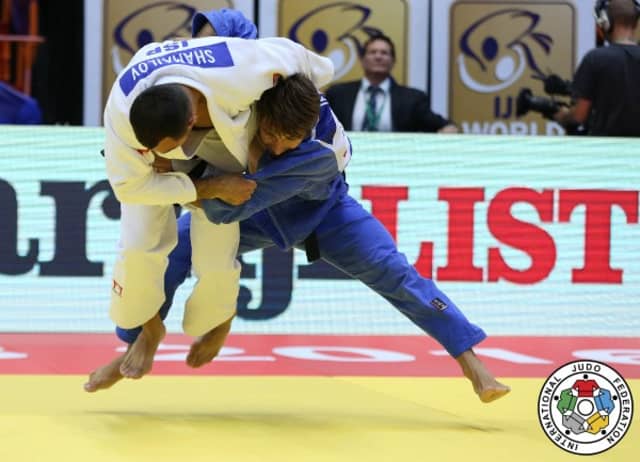 The first bronze medal was won by Jeju Grand Prix bronze medallist Tal FLICKER (ISR) who launched VIERU with an incredible o-goshi for ippon with 38 seconds left. VIERU had fought well and routinely attacked but an moment of magic from the Israeli saw him home having led by a yuko from a yoko-otoshi.

The second bronze medal went to ABDULZHALILOV who won his third Grand Prix medal at the expense of Lima Pan American Open bronze medallist Ilija CIGANOVIC (SRB) who was battling for an IJF medal for the first time. ABDULZHALILOV delivered the only score of the contest as a seoi-otoshi drove the Serbian fighter over and a waza-ari for the Russian gave him a platform to grasp control of the contest as CIGANOVIC was denied.

Top seed and Tyumen Grand Slam silver medallist Anzaur ARDANOV (RUS) was left disappointed as he suffered two back-to-back defeats by ippon having won his first contest by the maximum score to finish in seventh-place. 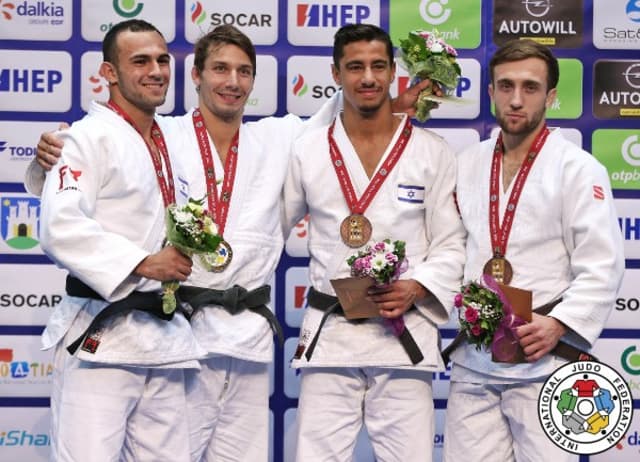