Judogi: Much More Than Armour

Section navigation
'In the beginning was the Word', a word that in judo was defined by Jigoro Kano in 1882, propelling our sport to the forefront of the Japanese and international scene and setting it up as a model for a more just society. Beyond the philosophical dimension of judo and its moral code, there are tangible elements that make it real and alive, but which are nonetheless full of meaning and symbolism. Foremost among these palpable elements is the judogi, which we judoka sometimes think of as our armour. 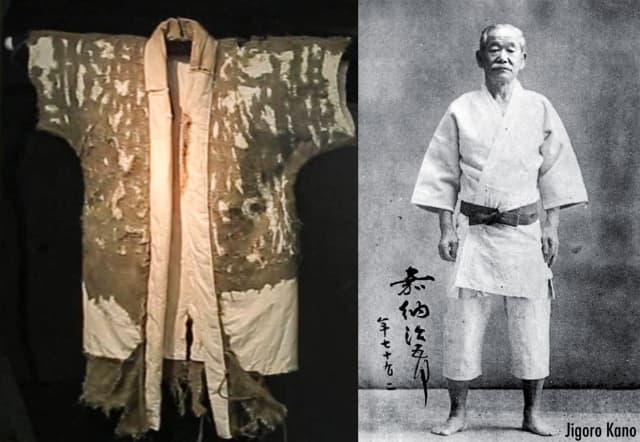 The judogi is however much more than protection and it is anything but white 'pyjamas' which one grabs and pulls with pleasure. It is interesting to understand that judo is one of those very rare disciplines in which the equipment the practitioner carries on their shoulders is in fact not intended to help or protect them, but is on the contrary designed to offer their partner in training or opponent in competition the opportunity to perform techniques in the best possible conditions of respect and safety.

It is important to think carefully about this concept to understand the influence that it can have on society. In judo, we offer our opponent the possibility of making attacks while they offer the same. We thus find ourselves engaged in a framed and peaceful confrontation that respects the intrinsic values of one another, a confrontation in which we measure ourselves on equal terms; the winner being the one who has the most technical and tactical knowledge. Once the randori/shiai is over, the result is therefore accepted with respect.

If you ask those around you for their perspective of the image conveyed by martial arts, very often you will be told that it is an activity practised by men and women in white uniforms with a belt around their waist. The image is instinctive, yet it would never have entered anyone's mind if Jigoro Kano had not invented judo. All modern martial arts uniforms draw their origins from the invention of the Japanese master and it is moreover our sport which has perfected and developed the system of coloured belts, taken up by many contemporary disciplines. 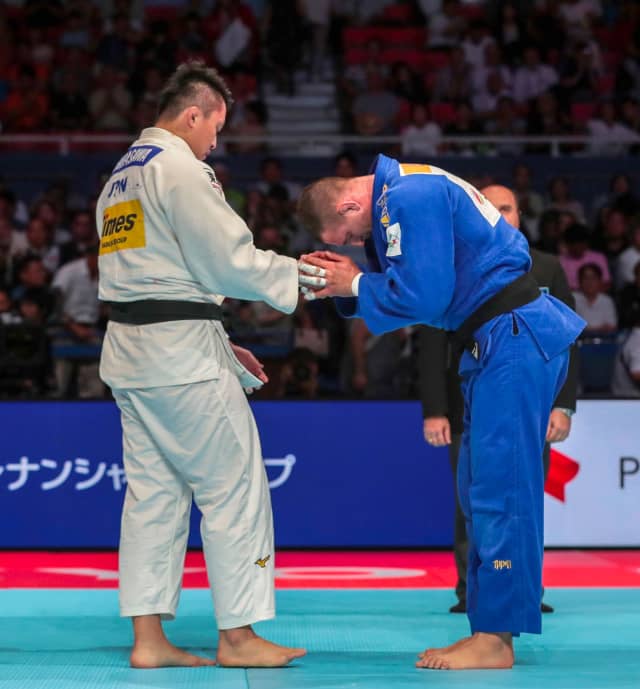 Today white and blue judogi are used in competition

It must be said that Aikido, Karate or even Kendo, to name a few, share a common history with judo, which nevertheless retains the privilege of seniority. It is not surprising therefore that the training uniform or 'gi’ is part of the panoply of the perfect martial artist. It is derived from the keiko-gi (keiko = practice, training, action and gi = clothing, outfit), usually consisting of a loose jacket and short pants. The judogi was the first martial art modern training outfit in the world and therefore shaped the perception we have today of some combat sports, both Japanese and those native to other countries.

The judogi (柔道 着 or 柔道 衣 *) is generally thicker and heavier than training uniforms from other martial arts, because it is intended to be gripped and used in throwing techniques. It must therefore be resistant. In the very early years of judo's development, Kano used various traditional Japanese kimonos which were too limited in strength. So he made a few changes to the design of his training uniform and looked for a stronger fabric, so that the gi wouldn't tear. He also made it looser around the body, to allow the grip while also allowing a great freedom of movement. Kano carried out numerous tests before settling on his first real model, which his direct students began to use and which has changed relatively little since.

From 1906 the judogi already had long sleeves and was adopted in its 'traditional cut' that we still recognise today. In 1918, the installation of Mr. Hayakawa Juichi (founder of the KuSakura company in Osaka), specialist in Sashiko (rice grain) fabric, made it possible to make new modifications to the Kano Judogi. In the aftermath of the Second World War, judogi were still made by hand because no machine allowed the two-ply weaving of the rice grain pattern, which ensures the resistance of the uniform. The industrialisation of the manufacturing did not intervene before 1970, with the creation of the now familiar 'Hishisashi' (diamond) design that can be found on the skirt of the jackets.

It took several more decades before strict standards were put in place to ensure the greatest fair play in competitions that became global. 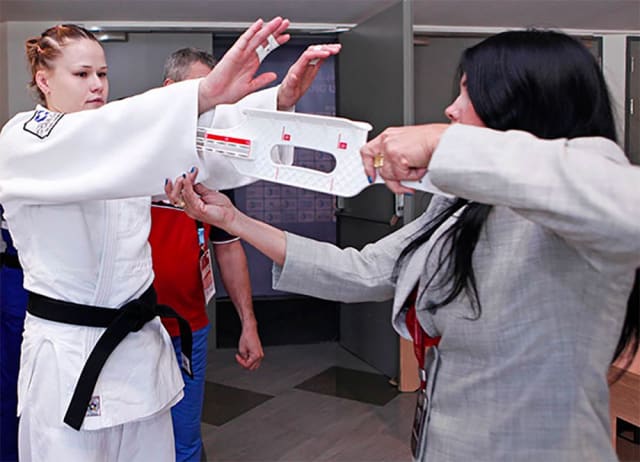 Controllers use a 'Sokuteiki' for sizing the judogi

Nowadays and systematically since 2014, each time an athlete climbs on the tatami during a World Judo Tour event, judogi control must be passed and a judoka may only come out to compete if their equipment has been tested and measured successfully. For that the controllers use a 'Sokuteiki' for sizing and a special lamp for identifying the labels. The sole purpose of this procedure is to ensure that all athletes enter the arena with exactly the same chances as their opponents. One can find here a practical illustration of the total equity induced and imposed by the practice of judo.

If today we are totally used to the presence of white and blue judogi in competition, this has not always been the case. Judoka of a certain age remember that in the past the difference between two athletes was made by a red or white belt which one added to the grade belt. Japan still organises its big, traditional competitions with only white judogi. It was Anton Geesink (NED), the first non-Japanese to win the world championship title (Paris 1961) before becoming the first European Olympic champion (Tokyo 1964), who proposed, in 1986, the use of coloured judogi in competition.

Originally the judogi or the keikogi were white. Specifically, they were off-white, as it was the colour of the woven cotton of the time and was bleached through washing. The whiteness of a judogi therefore demonstrated the involvement of a student. The whiter the judogi, the more commitment had been shown. At the very beginning of the development of judo, the acquisition of a uniform was expensive and their maintenance was entrusted to the best students of Jigoro Kano, among whom Tsunejiro Tomita and later Shiro Saigo. Above all, the whiteness made it possible to check the hygiene of the judogi and of its owner and little by little it became a sign of purity.

As a consequence of all this, it is considered that a judogi should be washed after each training, in order to always offer a training partner or opponent in competition, a clean and respectful uniform. 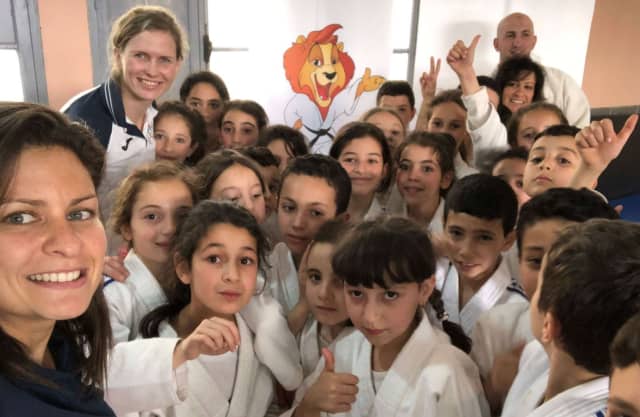 Judogi exist for all age categories. Here for the Judo in Schools programme. The IJF distributes thousands of judogi every year to support the development of judo.

However, it is not uncommon to find archives (photo and video) in which Kano himself practises judo in totally different outfits, ranging from traditional Japanese kimonos to a western three-piece suit.

When coloured judogi were introduced, discussions were heated, noting white, as we have seen, represents purity and tradition. Several colours were considered. Blue turned out to be the most realistic. It has enabled refereeing to evolve, brought greater visibility to the combat phases and allowed the public to appreciate their favourite sport more transparently. The white judogi is nevertheless still the norm and this is the reason why it is the only one allowed on the podia.

With the expansion and democratisation of judo, the International Judo Federation has played and continues to play a major regulatory role with respect to the unauthorised standards of judogi, particularly in competition. Nowadays all manufacturers follow these international standards strictly and guarantee that your judogi meets the correct specifications, as long as judoka follow the sizing recommendations.

A judogi therefore consists of a jacket (Uwagi), trousers (Zubon) and a belt (Obi), an element that will be discussed in more detail in an other publication. The jacket can be broken down into three parts: the skirt (Suso), the lapels (Eri) and the sleeves (Sode). These terms are also found in the name of several techniques, such as sode-suri-komi-goshi or eri-seoi-nage. 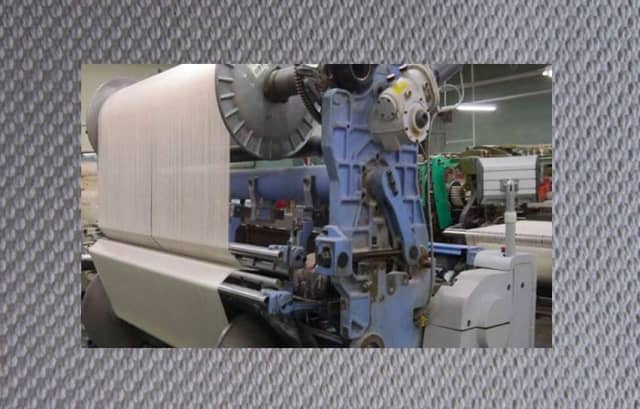 The industrial process modernised thanks to the invention of a new weaving process of the 'sashiko', invented in Japan

If judogi has evolved with relatively little change in its intention since Kano invented it, its manufacturing process has undergone significant changes. Woven by hand at the very beginning, what we sometimes wrongly call a 'kimono', saw its industrial process modernised thanks to the invention of a new weaving process of the 'sashiko', invented in Japan.

When you put on your judogi you should know that its life began as a simple spool of cotton thread (even if there are also mixed fabrics now), the cotton used having been chosen for its resistance and its quality. This cotton is then woven, cut and assembled to make a judogi. At this stage of its evolution, it becomes the armour of the judoka, but also embodies l openness to others and to the world and it allows demonstration of ability, erasing all the differences that do not contribute to the practice of judo.

When you get on the tatami, there is no longer a business manager or a worker, nor any ethnic or religious affiliation. There is no longer any discrimination linked to gender or disability, but there is a community of judoka, a family in white outfits, whose goal is to grow individually to help build a better world for all.

*Note: Both 衣 or 着, meaning are similar. Its like “clothes” or “wear”. Kodokan traditionally use 柔道衣 and general document, like newspaper use 柔道着. Both have the same meaning and both pronunciation are the same 'Judogi'.