Modesty: This is Talking About Ourselves Without Pride

Section navigation
If there is one value that is difficult to talk about, it is modesty, because of its definition: it is modest precisely and it does not like to be overdone. The very fact , however, that modesty is at the heart of the moral code of judo, requires that we dwell a little on its position.

Modesty would therefore be moderation and restraint in self-appreciation. Moderation and restraint already allow us to see a little more clearly because they imply a refusal to do too much, but also not to do enough. This is undoubtedly where the whole paradox sits and above all there is the difficulty of recognising genuine modesty.

It is impossible not to associate modesty and humility intimately. It is by immersing ourselves in the mysteries of these two concepts that we can learn more about the best attitudes to observe on the tatami and in life. The term 'modesty' comes from the Latin 'modus', which means measure. Thus modesty amounts to showing restraint in the appreciation of oneself and of one's qualities. It is the social appearance of humility which has its roots in our inner forces.

In literature, modesty is unpretentiousness in the expression of feelings. If it is moderation, reserve and restraint, modesty can also, without warning, become excessive and lead to false modesty. This attitude, which amounts to minimising your role, your importance and your self-appreciation, in an affected way, is unfamiliar in the way the judo family understands it. False modesty inevitably leads to fatuity, pride, presumption, pretension, sufficiency and conceit, 'qualities' which do not correspond in any way to what we seek to teach our children.

Thus modesty/humility is to be distinguished absolutely from 'false modesty'. This one is adorned with humility, but often with the aim of attracting more compliments, while humility itself must be considered as acceptance, without ignoring one's qualities and the fact that one is not ultimately, necessarily responsible for it. 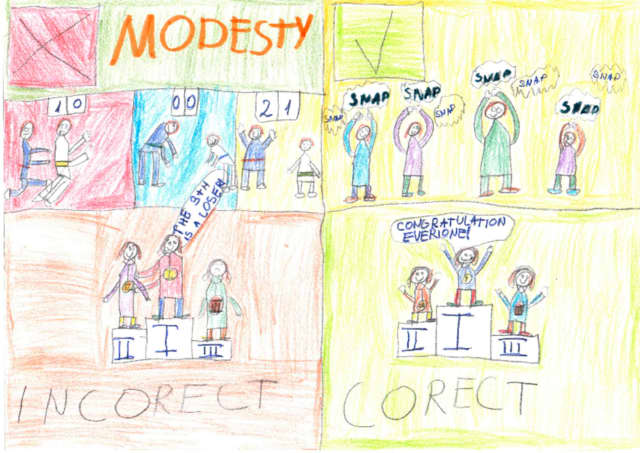 Being sincerely modest is therefore not easy, because there is a great temptation to fall into falsehood. The playwright Prosper Jolyot de Crais-Billon (1707-1777) said: "Of all the virtues, the one which, in the world, always seemed to me to succeed least to the one who practices it, it is modesty." While the poet Pierre Reverdy (1889-1960) added: "The best thing about modesty is the intelligence that must be deployed to stick to it".

In a sport like judo, in its competitive dimension perhaps more than in the others, although this can be discussed, it is a question of results, medals and of course overall performance. It can be tempting for those who reach the highest heights to forget what modesty is, but to be great you must first learn to be small. Humility therefore becomes the basis of all true greatness. This is what we can see daily on the World Judo Tour, as long as the prize lists are, the champions are overwhelmingly humble, because they know the price of the effort and they know that when they step on the podium, they don't owe it only to themselves. The artist, writer and statesman François De La Rochefoucauld explained: "Modesty is to merit what shadows are to figures in a painting: it gives it strength and relief". Modesty does not mean thinking less of yourself, but thinking less about yourself.

Humility and modesty could be defined as the feeling and the state of mind which reserve a place for awareness of your weaknesses, while also being aware of your strengths, without publicising either to excess. 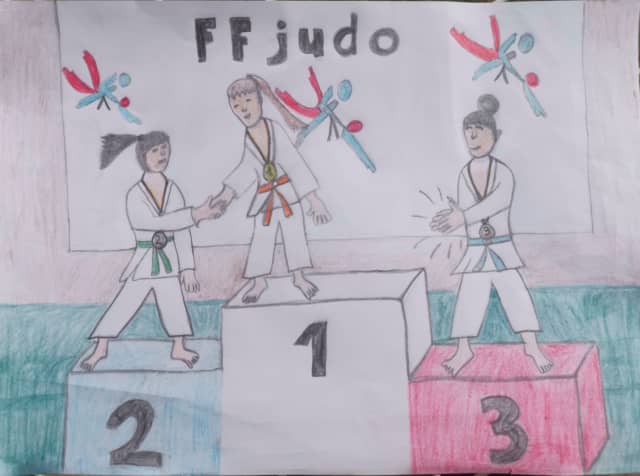 Talking about humility calls for knowing your roots literally as well as figuratively. Once again, it is necessary to delve into the Latin ethology of the word to capture its full meaning. So humility derives from 'Humus', meaning 'earth', hence this notion of roots and grip with reality. Humility is in opposition to all the distorted thoughts which can be perceived of oneself, such as pride, self-centeredness, narcissism and even on the contrary self-loathing must be avoided.

It should not be believed, however, that being humble or modest is innate in humans. This is acquired over time and practice. It is in this way that the values carried by the moral code of judo and put into practice on and outside the tatami have a real educational value. Learning to judge yourself at fair value is a real awareness of your condition and your place in the midst of others and the universe.

As we have explored, there is a very close link between modesty and humility, but as we have also explained, the line is a fine one. There is not necessarily a link between the way an individual may show self to others and the true reality. There is a danger of seeing modesty only as a 'demonstration' of humility by an individual who otherwise lacks it. It is possible to draw an identical parallel with pride. This is not contradictory with humility because it is possible and even necessary that one be proud of oneself when one has achieved something important. It is also showing modesty to be able to realise that we have scaled much and assessed immeasurably to get there.

To be humble before the nature of things is to have the feeling of being in the right place in relation to the world around us, but it is also the attitude by which we do not place ourselves above things or others and by which we respect what we have been rewarded with. Context is so important here. 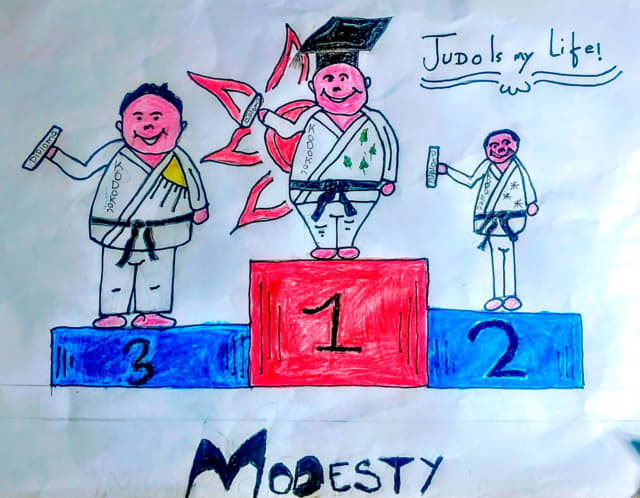 A lack of humility and modesty can lead to self-hatred and to the very rejection of one's own existence, while the more appropriate path must lead to the full acceptance of existence as a whole. There is no question of feeling inferior or servile. We can thus say that the humble human does not see themselves as inferior to others because they have ceased to believe in their superiority. As such, they are not unaware of what they are worth or can be worth, but refuse to be satisfied with it. According to the philosopher André Comte-Sponville, "Humility is not ignorance of what one is, but rather knowledge or recognition of what one is not. Humility is the lucid virtue of the man who knows how not to be God. To be humble is to love the truth more than yourself".

Reading these lines, it would be tempting to see modesty only as a social convention, while humility would be truth in itself. In the moral code of judo, the term modesty encompasses all these dimensions and it is for this reason that it is said that modesty is the ability to speak about oneself without pride.

Humility may be associated with weakness, while its opposite, pride, is a narcissistic exacerbation of the self, which blocks all personal development. Buddhist monk Matthieu Ricard writes: "Humility is a forgotten value in the contemporary world, the theatre of appearance. Magazines keep giving advice on 'asserting oneself', 'imposing oneself', 'being beautiful', appearing instead of being. This obsession with the favourable image that one must give of oneself is such that one no longer asks the question of the baselessness of appearing, but only that of how to look good". 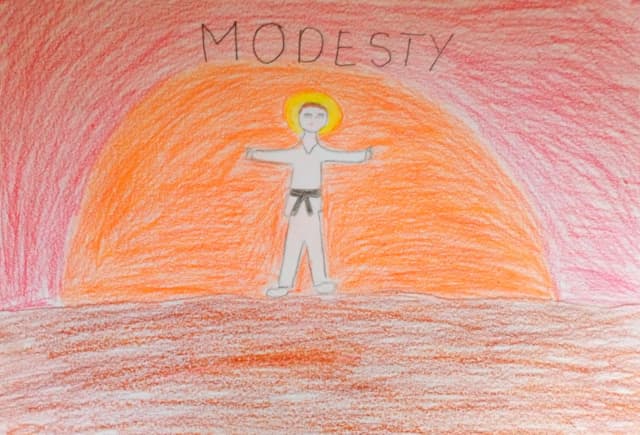 On the tatami, once all the roughness of social origin has been erased, once the judogi is re-hung, there is no other choice than to be modest and humble, because only the capacity to overcome one's fears through work performed to increase the technical and tactical knowledge, will have an impact on the result. This is why training is not only physical, it is also mental and moral. By practising your uchi-komi, by committing to perfecting the kata, by fully engaging in randori, you not only learn to do judo, but you understand how to live through judo. By sweating humbly you will be able to assess the distance travelled as much as the distance yet to cover. When you leave your ego in the locker room, you gain an openness to others. By getting closer to your inner truth, without minimising your qualities, without boasting or showing off your merits, you can build a balanced life.

For author Neel Burton, "Real humble people do not live for themselves or for their image, but for life in itself, in a condition of peace and pure pleasure".

Because yes, that is one of the keys to a balanced life: pleasure. By living the pleasure of practice, by integrating the pleasure of learning about the outside and inside world, not only will you not be simply modest, but you will become humble. This is a vast programme, which begins as soon as you enter a dojo and one which never ends.