Section navigation
To be sincere, that's a concept to which we all would like to adhere, is it easy to always express oneself with the truth as the only guide, the truth in which we at least believe? Certainly not. First of all, who speaks of sincerity and therefore of truth, does it based on a notion that is very subjective. The truth of one will not necessarily be that of the other and thus the sincerities of two people can diverge. That already makes it possible to perceive, within this word, a significant complexity.

Before going further into the analysis, it is good to understand what is hidden behind the words. Dictionaries around the world therefore explain that sincerity is above all a quality, that of someone who expresses himself/herself and acts frankly according to what he/she thinks. When we talk about sincerity, we also imply the faithful expression of the real feelings that we have. It is a question of authenticity, absence of faking or counterfeiting. The fact remains that all of this is very abstract and subjective.

Thus truth is an intangible notion which finds itself at the confluence of a belief in a system stemming from consciousness. Truth is representative of reality and of its supposed correspondence, translated by language. As soon as you approach abstraction, things get more complicated, but it is important to understand what we are talking about. In other words, the truth (from the Latin veritas, truth, derived from verus, "true") is therefore the correspondence between an expressed proposition and the reality to which this proposition refers. We must not delude ourselves, despite everything, because there are many definitions.

If we come back to sincerity, some will see frankness, but also loyalty; concepts that oppose concealment, falsehood, hypocrisy, deceit or imposture. These are some of the many attitudes that any judo teacher must denounce to students, by teaching them not to disguise their thinking.

To be sincere is not to be in appearance as explained by the writer André Gide (1869-1951), “We cannot be sincere and appear at the same time", while Jean-Baptiste Poquelin, known as Molière (1622-1673) maintained, “I want us to be sincere and that, as a man of honour, we never drop a word that does not come from the heart." 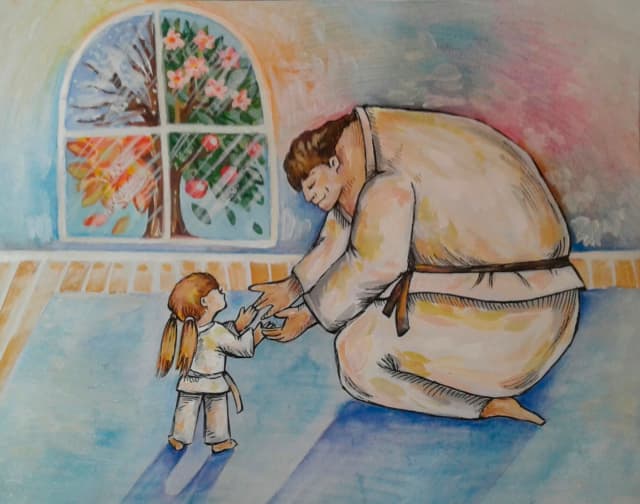 So here we are. To speak and act with sincerity is to do it with the heart, with the soul and with the guts. It is a philosophical virtue which consequently includes a certain practical risk, one which goes beyond all fine speeches. Again, this is what we learn by regular practice of judo, by facing our fears and our own will to hide from ourselves the reality of a given situation. If we lie to ourselves about our ability to cope with difficulty, then it is a safe bet that we will not succeed in achieving objectives which will remain utopian. Behaving sincerely towards ourselves and towards others can only bring us a boost of energy to move forward, regardless of the obstacles.

In the Confucian tradition, which influenced Jigoro Kano strongly, sincerity which is also expressed in honesty or fidelity is a virtue of clarity in social relations. This implies the identity between the person's thoughts and words, but also the conjugation of the internal feeling with the social hierarchy. We find this notion in the loyalty of bushido.

For centuries, all religions and beliefs have sought to understand and apply the concept of sincerity. In the Muslim religion, for example, the 112th Surah of the Koran has the title Al-Ikhlas, which means sincerity, but also honesty and credibility. The intention is to emphasise the word of the heart, which can raise a person to the level of sincere people, as it can lower one down. Some Godly predecessors said, "The hardest battle I have waged against my soul is when I wanted to force it to be sincere."

In the Aristotelian vision, its author explains, “A man who recognises the existence of his own qualities is sincere, without adding or removing anything from it." According to Aristotle, sincerity, as well as falsehood, for that matter, can be used with or without aim, but in any case the true character of all being is revealed in his/her language, his/her acts and his/her way of living, each time that he/she is not acting for an end. 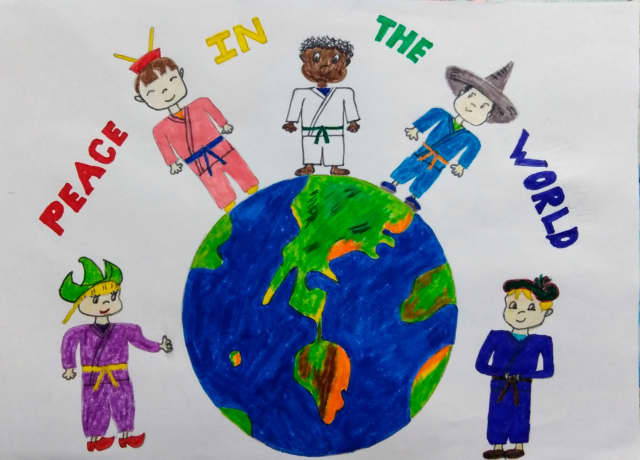 For the German philosopher Immanuel Kant, he goes so far as to affirm that sincerity is an imperative and, as such, rejects all rights to falsehood.

For Christians around the world, truth is a founding value and sincerity is an evangelical concept that is found in the writings. It is thus said, “You shall not testify falsely against your neighbor (Exodus 20.16)" and lying is therefore prohibited.

Finally, in a more contemporary vision, great thinkers such as Jean-Paul Sartre, Yvon Belaval, Vladimir Jankélévitch or Elsa Godart have also looked into the question of sincerity and have devoted numerous analyses to it.

As we have just seen, this journey to the heart of sincerity is complex, although it is the founder of what we learn on the tatami. To be a sincere judoka is effectively to express oneself without disguising one's thought. However, not lying does not mean saying everything and anything in any way. Sincerity has meaning only if it is attached to other values of the moral code such as respect, politeness, or even self-control, not to mention them all. 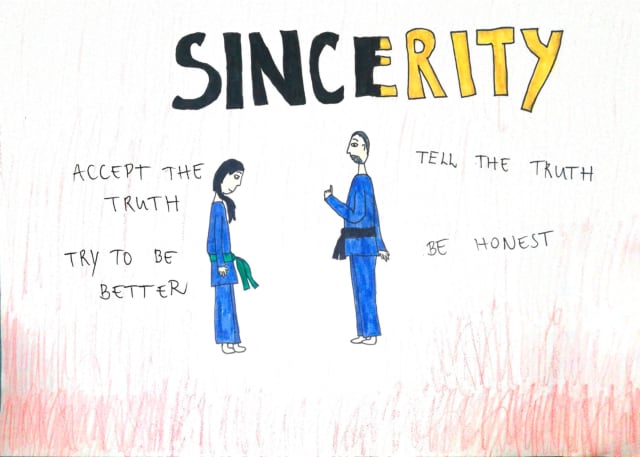 If the goal is to be sincere with others, this can only be achieved if one applies the principle of honesty to oneself in the first place. Be sincere with yourself. Be aware of your strengths and weaknesses, work on the latter, while strengthening the former. Be able to sort out one truth that suits and one that disturbs. In one case, you will probably not be really sincere and sooner or later, the masks will fall, in the other you will be in a position to be able to face the most complicated situations.

The moral code of judo, however, was not created to teach lessons. It is more a guide to hold your hand in your daily life, than a list of injunctions before which one only bows with devotion by forgetting the principles at the first opportunity.

A pure heart is a sincere heart, let us meditate this with sincerity when we get on the tatami, as well as when we get off. We must not be afraid to express who we are and above all what we are, if we wish to build a fairer world and speak truthfully.