How are heroes made

By Celine Geraud on 24. Apr 2020
Share
Five years in the French judo team, winner of the Paris Tournament in 1990, Marc Verillotte is also a Major in RAID, the elite unit of the French National Police. For 20 years within the RAID assault detail, he took part in numerous interventions. Notably, he was in the front line during the assault of the Bataclan in 2013 and the liberation of the 26 hostages of the Hyper Cacher in 2015. Retired since December 2018, he is now a lecturer. His specialty is the optimisation of mental skills in crisis zones. Marc Verillotte’s testimony during this unprecedented period of confinement, due to Covid-19, is a source of inspiration and reflection. 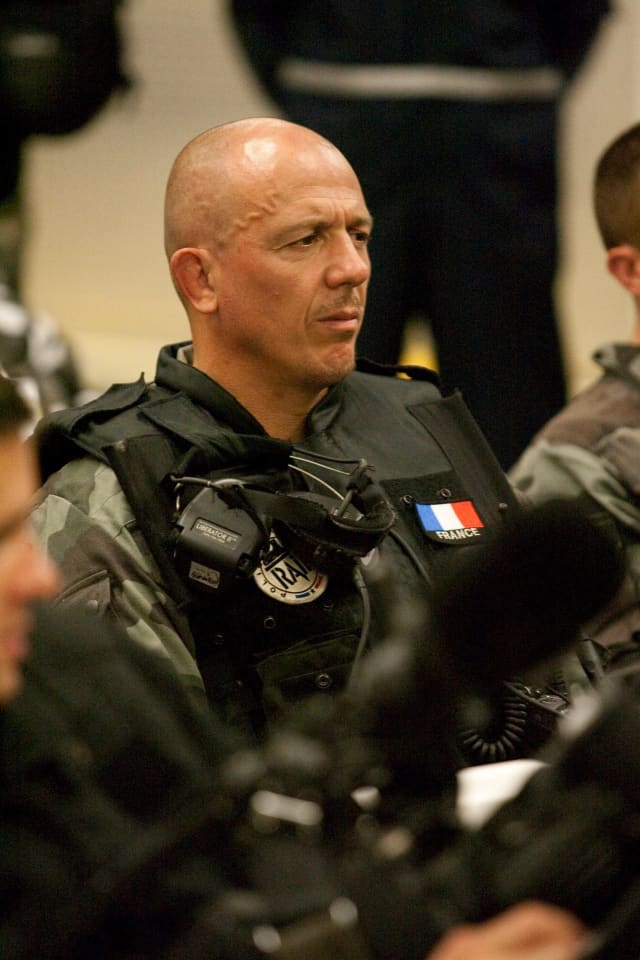 How does a RAID Major, used to being in action, manage this period of confinement where movement is limited? “The waiting times in the assault column that I have experienced in RAID have characteristics in common with our present situation. They are sensitive moments to manage because they are subject to multiple threats: the detailed consideration and assessment, the overflow of negative thoughts, but also the stress that looks for loopholes of vulnerability in order to rush in. It is absolutely necessary to replace or occupy these waiting moments with simple and useful actions.

For a former high level judoka, I admit confinement may be easier to manage. When we were in intervention, my team-mates envied my ability to relax while remaining focused. There were some lightning assaults that lasted a few minutes and others more trying that could last more than 30 hours. My experience on the tatami allowed me to change pace and control adrenaline very easily, like during a tournament where you have to know how to switch on and off, to go up and down the physical and psychological cursor between fights. I go through this period of confinement with the same attitude.” 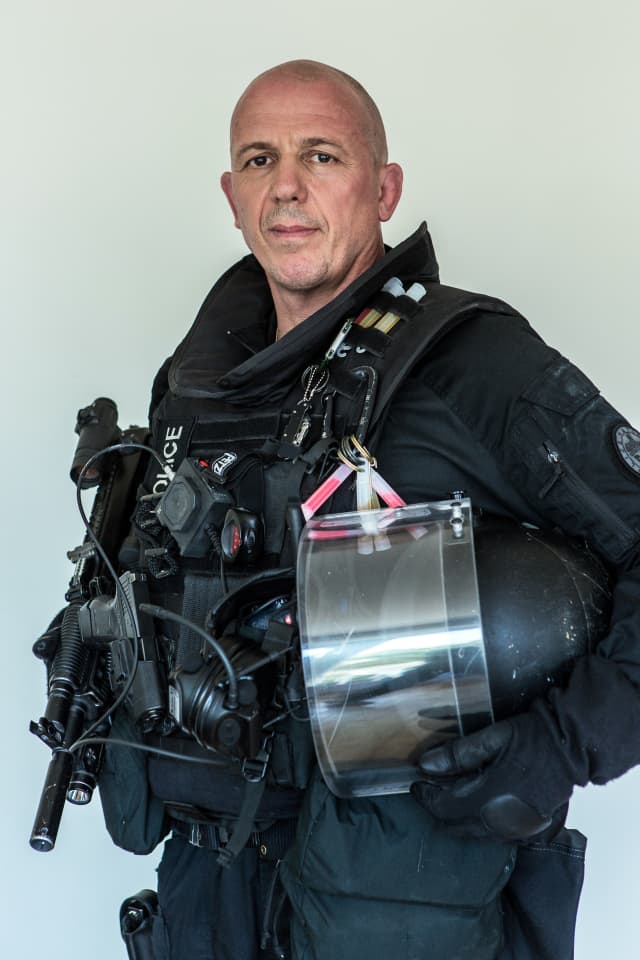 How has Judo helped you to persevere and climb within the elite RAID unit? “Judo has been definitive. When I left the French team to join the police, I was the strongest physically, but mentally, psychologically I had to work hard and adjust my preparation in order to stay until I was 53 years old in the squad. Twenty years on the front line, in active service, is rare because the level of requirements in RAID is very selective. Practising judo has made me a 4X4, flexible, with an above-average ability to adapt. On a tatami, you spend a lot of time chaining uchi-komis, automating each gesture ad infinitum, but during a fight you must always be prepared for the unpredictable, know how to manage your emotions. This routine allows you to be controlled in the most risky situations with much more serenity than others.

On 9th January 2015, during the terrorist hostage-taking of the Kosher Hypermarket at the Porte de Vincennes, I set the explosive that would open the door. I knew that I had no space to make a mistake. I knew that just behind that door the terrorist was equipped with a weapon that could shoot 600 rounds per minute and that the slightest mistake could result in the death of a dozen hostages in a few seconds. At RAID as on a tatami there is a microfilm that separates you from the status of hero or zero! Everything must have been discussed before: coherence, morals, laws and values.” 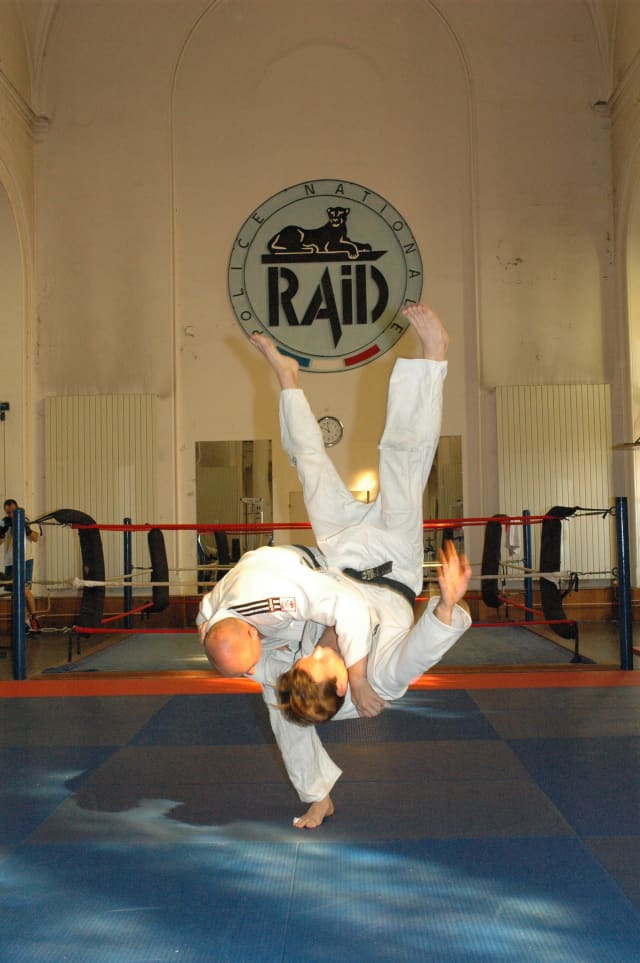 Precisely, among all the values of judo, which one has the most meaning for you? “Without hesitation, mutual welfare and humility. During an assault, you take incredible risks to stop a terrorist but also to protect your team-mates. On 21st March 2012, during the intervention at Mohammed Merah’s home in Toulouse, I took two bullets; one in the shoulder and the other in the helmet, between the eyes. It was an 11.43mm caliber, which fortunately did not pass through the helmet armour completely, but it caused a cerebral haemorrhage. When you return to the group, after several weeks, the mutual welfare and friendship that binds you to your brothers in arms show all their meaning. Here again, judo helps you to overcome this ordeal, because in terms of resilience, the experience on the tatami is unique. In training, in competition, you fall a lot, you lose regularly. I think that judo is probably the only sport where you get dismantled so much, regardless of your status. The fall, the capacity of resistance, the management of fatigue and emotions are specific to our martial art. A judoka who wants to become a champion must first learn to get up again and again, remaining humble and conquering at the same time. You can't have a big head otherwise you will self-destruct. In RAID you have to have the same attitude, otherwise you won't hold on.” Do you have advice for the judo family, for living better in the last weeks of this confinement? “I'll give you two! First of all, to take height and to know how to leave the event, not to be a prisoner. Take distance, change the angle of your view, refocus on one’s self. You have to remove the darkening filter in front of your eyes and replace it with a lighter one. We have to put things in perspective: we are at war with this virus, but for most of us, this war consists of being stuck on our couch and not of living 4 years in a trench, under shells, gas, rats and vermin, as was the case in Verdun during the First World War.

My 2nd advice: take up sport! Jim Rohn, an American writer said, “Take care of your body, it's the only real place where you live.” Doing sports, even for half an hour, lowers physiological stress, emotional tension and anxiety level. It improves your self-image and increases your endorphin level, the hormone of joy and well-being. So let's prepare our body with enthusiasm, so that it will be ready when it's time to bounce back, at the moment of ‘deconfinement!’