Written by Nicolas Messner on 08. Oct 2021
Photographs by Gabriela Sabau, Marina Mayorova
Share
The third day of the 2021 Junior World Championships in Olbia ended with a good harvest from European countries which, since the start of the event, have demonstrated their power and their good preparation for this first world level event of the post-Tokyo Olympic Games era. 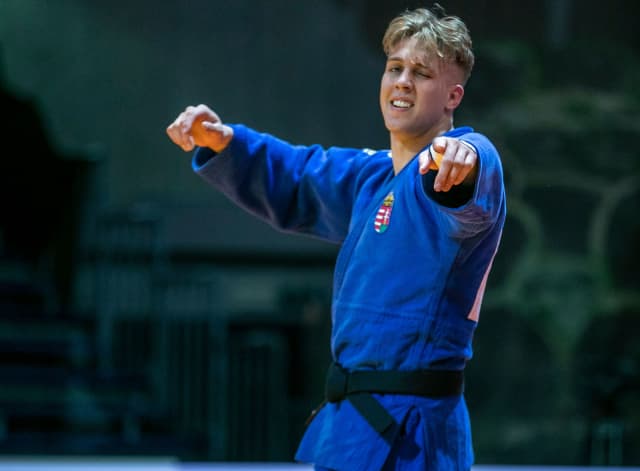 It is a fact that the Japanese are not there, but that is their decision and it in no way detracts from the performance of the countries involved; on the contrary. After three days of competition, there were already no less than 20 medallist countries.

What undoubtedly strikes the discerning eyes of all observers of these championships, whether they belong to athletes, coaches or officials, is the level of judo practised. In Olbia, of course it is a question of tactics, but it is above all and beyond everything a question of commitment and the will to throw the opponent.

The juniors can be proud of their judo; it's as good as that practised by their elders. You just have to see the amount of ippon and waza-ari scores to be convinced by that. The juniors offer us a magnificent show, up to expectations, which does a lot of good and which portends some world-class World Judo Tour tournaments in the near future. It is certain that the competitors involved in Olbia will be keen to prove that they have the makings of world and Olympic heroes. This promises generational clashes of the most beautiful kind from next week, during the Grand Slam in Paris.

In Zagreb, a week ago, we already underlined that the current phase is more than a phase of transition between two Olympic cycles. It is a phase of construction during which the new builders can express their full potential. Thank you to all our juniors for bringing a youthful and energetic touch to international judo and for blowing an invigorating breeze of freshness across our heads.

-81kg: A Second Gold for Georgia with Sherazadishvili

Georgia does not need to be presented any more when it comes to talking about judo. With world champions and Olympics champions coming from the Caucasus country, it is not a surprise to discover a new Georgian name in the final of a world championships, which today was the case of Giorgi Sherazadishvili. He faced Adam Tsechoev of Russia for the gold medal, showing the good form of the Russian delegation too, which has already won two titles in Olbia. 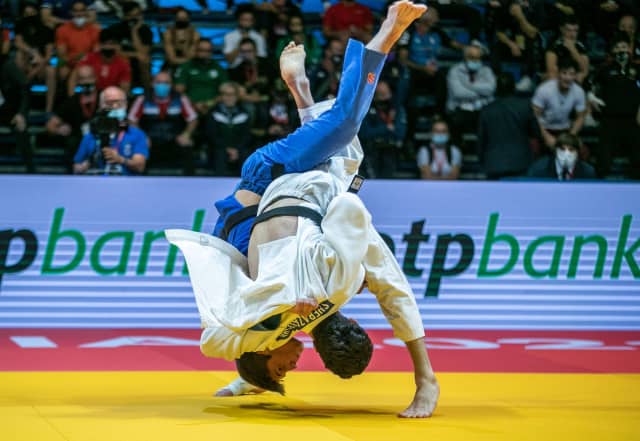 After the first two bronze medal matches, to be reported on shortly, the final started with the same high rhythm, giving the impression that once again the match won't last four minutes. Less active than his opponent, Adam Tsechoev was penalised a first time. As this pushed him to take risks, he was countered by Sherazadishvili for waza-ari. The Georgian champion just had to control the rest of the bout to gain the junior world title. Something tells us that it's not the last time we will see Giorgi Sherazadishvili. This is the second gold medal for Giorgia in Olbia.

Giorgi Sherazadishvili said, "All Georgian judoka are strong because we work hard and we help each other. We are never alone on the mat, with all of the team and a whole country supporting each judoka. There is no better motivation than that." 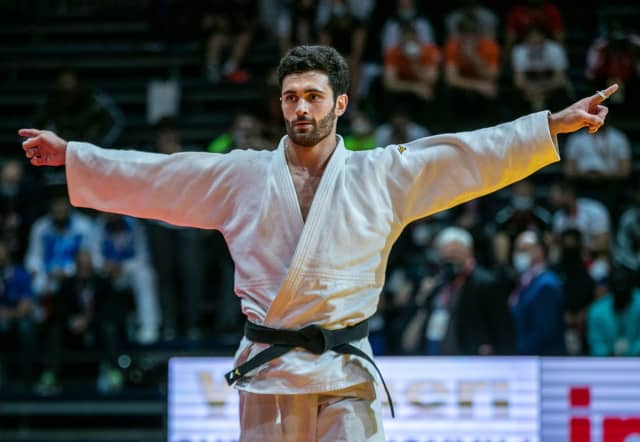 In the first bronze medal contest, Ayan Baigazy (KAZ) opposed Eljan Hajiyev (AZE). Hajiyev quickly took the lead with a clear waza-ari that was just lacking a bit of impact to be counted as ippon. A few seconds later, everyone could feel that something was going to happen and this time it was Ayan Baigazy who scored waza-ari with a massive counterattack (te-waza) on Hajiyev's attempt to score with a sasae-tsuri-komi-ashi. It was clear that this match wouldn't reach the end and that is exactly what happened when Eljan Hajiyev performed an aerial koshi-waza technique, this time for ippon.

Yesterday, Gianni Maddaloni explained that together with his son they would win the title if Bright would follow, to the letter, the plan strategised together. This almost worked, until the quarter-final, when Bright Maddaloni Nosa (ITA) lost against Eljan Hajiyev (AZE). For the Italian there was still one chance to step on the podium, when he faced Artem Bubyr (UKR) in the second bronze medal contest. Unfortunately he was quickly countered on his very first attack and then pinned down by Artem Bubyr, with the medal eventually going to Ukraine. 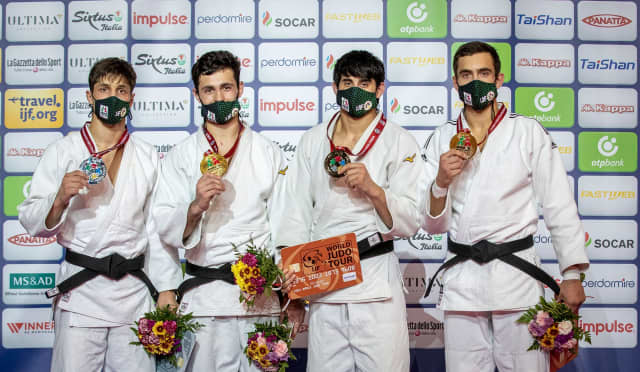 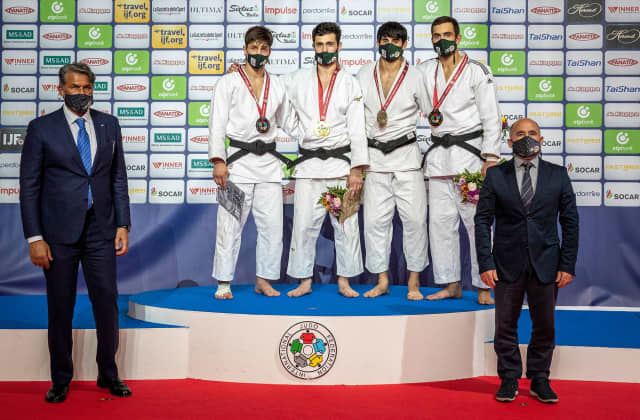 -70kg: A Pure and Humble Win for Tsunoda of Spain

Cadet world champion in Kazakhstan in 2019 and bronze medallist at the last European Junior Championships in Luxembourg, Ai Tsunoda Roustant (ESP) is already an accomplished junior. She also already won a bronze medal in a Grand Prix on the World Judo Tour. Today she was ready to add one important line to her prize list, as she entered the final of the -70kg category against Croatian Lara Cvjetko (CRO), who was ready to follow in the footsteps of her illustrious teammate Barbara Matic, senior world champion last June in Budapest. 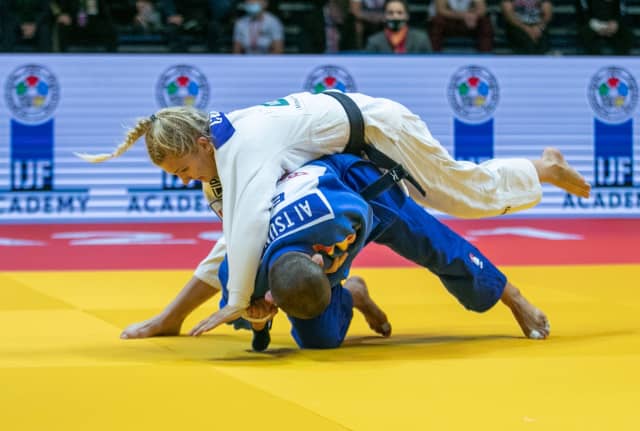 Being les active than Tsunoda Roustant, the Croatian competitor was penalised a first time with a shido for passivity. Unsuccessful until the last minute and a half, Tsunoda Roustant launched her own version of a reversed tsuri-komi-goshi and this time scored a waza-ari. Very confident in her capacity to control the rest of the final, Ai Tsunoda Roustant won already the second world title of her young career in pure and humble style.

Ai Tsunoda Roustant said, "Yes I have won and yes I’m very happy but I made too many mistakes today; I felt them too many times. I need to solve that problem but I hope it also means that I can still progress." 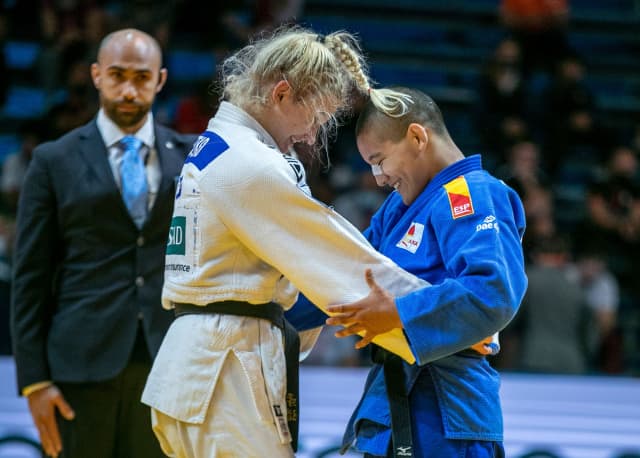 The first bronze medal contest saw Luana Carvalho (BRA) and Friederike Stolze (GER) competing for a medal. The alert was red when Luana Carvalho almost caught Friederike Stolze at the beginning of the match but the German competitor escaped but not the second time it happened and that’s how Carvalho secured a perfect turn-over to apply a sankaku-jime, transformed into an immobilisation for ippon and the bronze medal.

Katarzyna Sobierajska (POL) and Nataliia Chystiakova Nataliia (UKR) competed for the second bronze medal. After a long sequence of observation with no score, the first one to add one waza-ari to her name was Sobierajska. It was a score that she kept alive until the final gong, to win bronze. 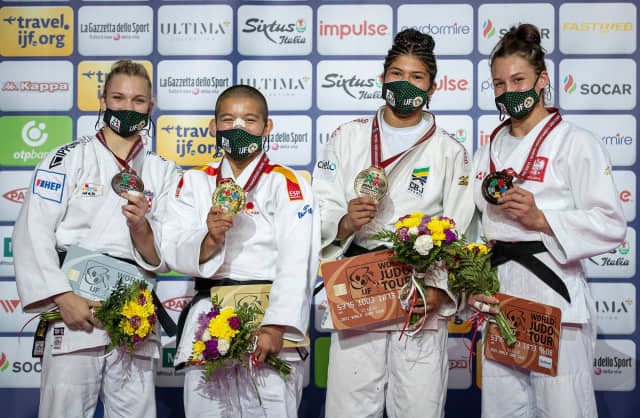 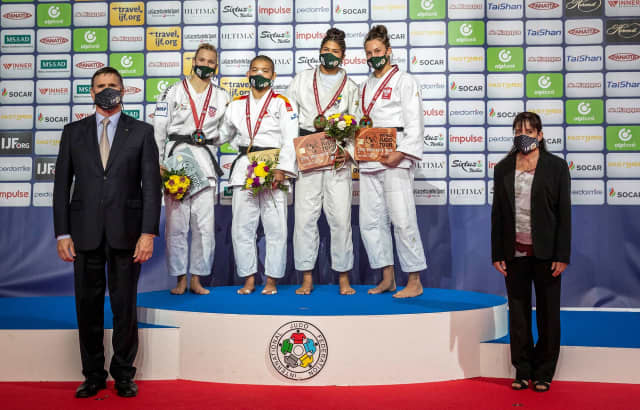 Following the success of Joanne Van Lieshout on day two of the Junior Worlds, the Netherlands placed another athlete in a position to win gold, with Tigo Renes facing Peter Safrany of Hungary in the final of the -90kg weight division. 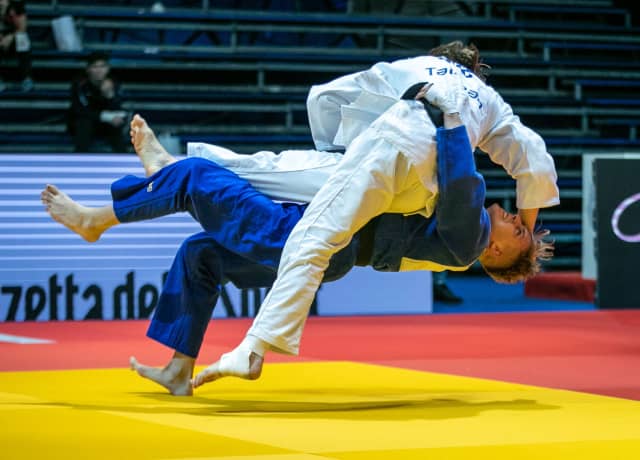 Peter Safrany had already had the opportunity to show his counterattack capacities and once again in the final he scored twice with what looked like his tokui-waza or preferred technique, to win the title for Hungary. It must be said that the whole final block was exceptional, as only one match went to golden score and the whole sequence was not longer than one hour and ten minutes.

Peter Safrany said, "Today my ura-nage worked pretty well but I’m so tired, especially since the quarter-final. That contest was the toughest because the French guy was never tired." 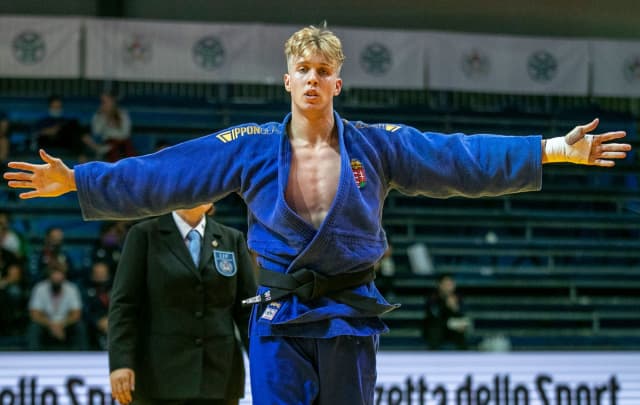 Russia was assured to have one more medal with both Adam Sangariev (RUS) and Egor Andoni (RUS) being qualified for the bronze medal contest. This was the first and only golden score of the final block of this third day. With athletes knowing one another so well, they could not find a simple opportunity to throw and therefore the winner was decided by the one with less penalties than the other. Bronze went to Adam Sangariev.

The French athletes all showed some really great judo throughout the preliminary rounds on day three but at the end of the day, only one athlete, Maxime-Gael Ngayap Hambou, was in a position to step on to the podium, against Alex Cret (ROU). It was a really pleasant match to watch both athletes offering to the public a lot of action and scores. Alex Cret scored first but his waza-ari was downgraded. Then the French competitor scored a first waza-ari with a rolling movement, followed shortly after by a low sode-tsuri-komi-goshi for ippon and the bronze medal for Maxime-Gael Ngayap Hambou. 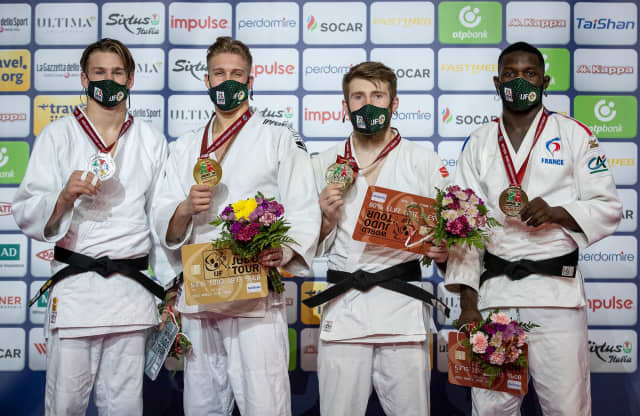 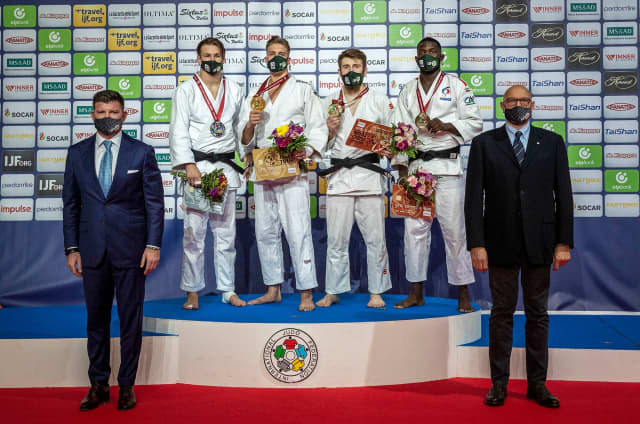