Beijing 2008 Olympic bronze medallist Ketleyn QUADROS (BRA) produced a vintage display to achieve a career first 11 years after the finest moment of her career. Montreal Grand Prix bronze medallist Alexia CASTILHOS (BRA) struggled to get to grips with the local judoka who shook her compatriot with ashi-waza in an imposing start. QUADROS utilised her sutemi-waza on the edge of the area to clinch gold by the maximum score as the race to be Brazil’s pick for Tokyo 2020 looks like it will go the distance until the Masters in 2020. 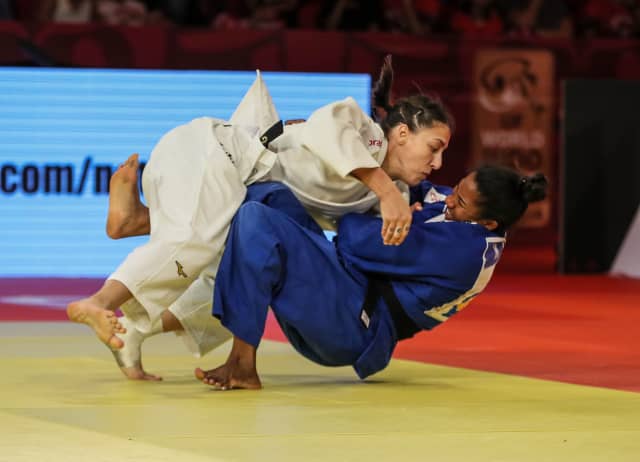 In the first semi-final CASTILHOS outperformed Rio 2016 Olympian Mariana SILVA (BRA) by a waza-ari score in an exciting all-Brazilian clash that had the teeming crowd out of their seats for all four minutes. 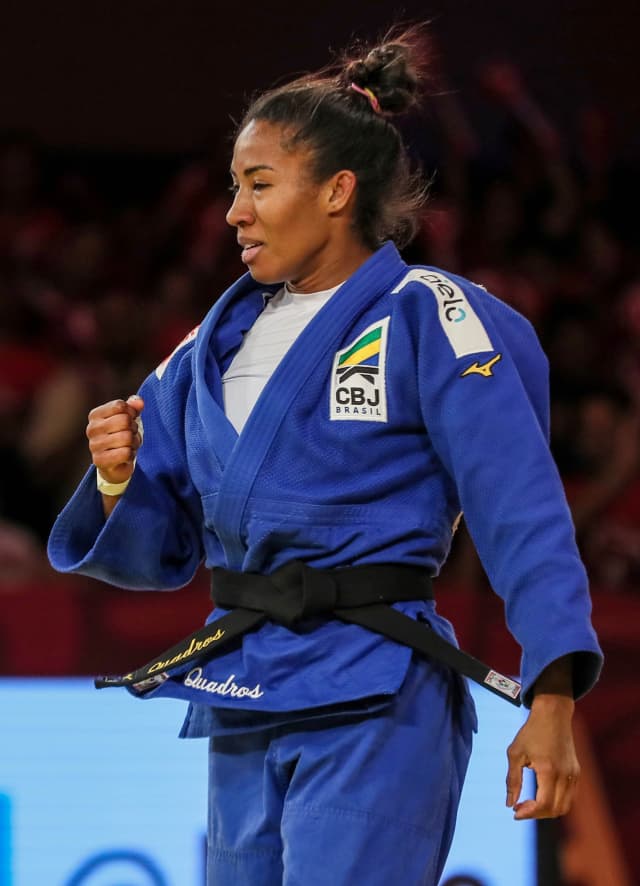 The first bronze medal contest was won by Budapest Grand Prix bronze medallist Maylin DEL TORO CARVAJAL (CUB) after YANG was dismissed after 22 seconds of golden score. YANG was penalised for leg grabbing which was her third infringement to gift a place on the medal podium to the Cuban in the first contest of the final block on day two.

The second bronze medal was won by Montreal Grand Prix silver medallist Amy LIVESEY (GBR) who sent SILVA skyrocketing through the air with a gigantic ura-nage for ippon. SKK Judo Club product LIVESEY showed her power to beat the returning home judoka who had to settle for an encouraging fifth-place. 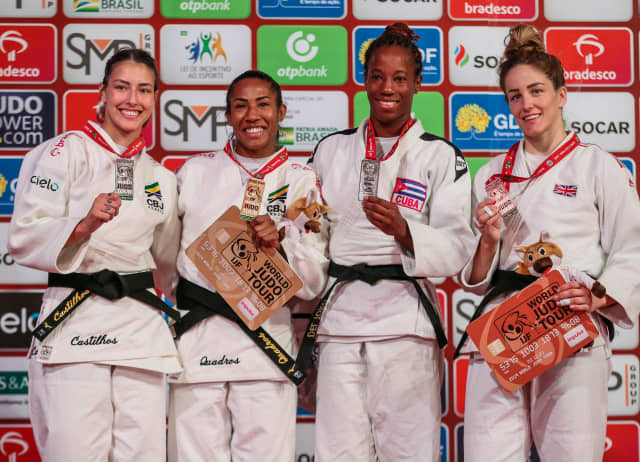 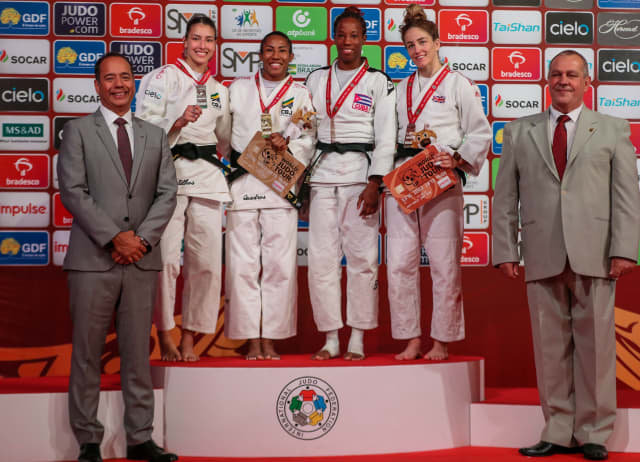 Three-time world champion Yuri ALVEAR (COL) beat one of the brightest prospects in the sport to rule in Brasilia. The 33-year-old had too much experience for 21-year-old Montreal Grand Prix winner Giovanna SCOCCIMARRO (GER). Germany’s leading -70kg hope was only 11 when ALVEAR won her first world title in 2009 and still has to make up ground to trouble the elite judoka in the category but has time on her side. A waza-ari with 30 seconds left from a o-soto-makikomi sent the Colombian to the top of the medal podium for her second Grand Slam win to add to her three world titles and two Olympic medals. 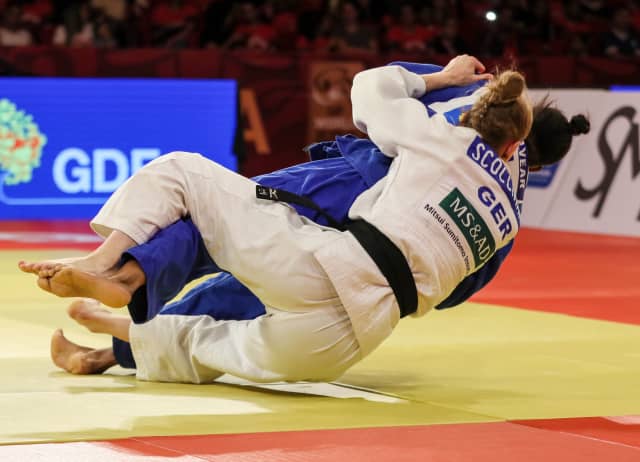 In the first semi-final SCOCCIMARRO saw off former world number one Kelita ZUPANCIC (CAN) with an uchi-mata to power into the final with a strong showing. 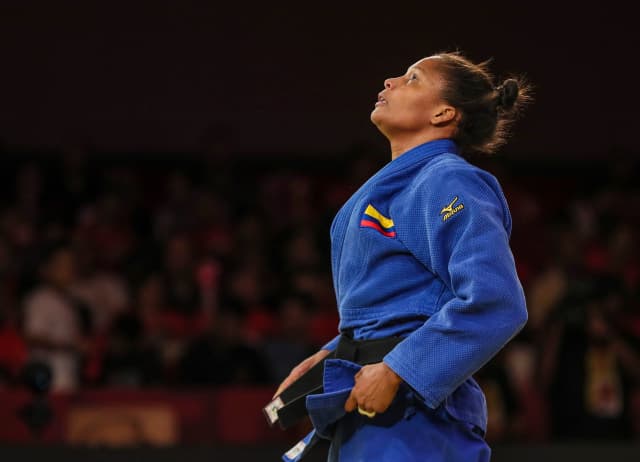 The first bronze medal was awarded to world number 13 HOWELL after world number 12 Assmaa NIANG (MAR) was penalised for the third time for going out of the area. Wolverhampton Judo Club’s HOWELL earned her second Grand Slam medal and will now expect to break into the top 10 on the IJF World Ranking List before the year is out.

The second bronze medal was won by Maria PORTELA (BRA) who won a battle of former top-ranked judoka against ZUPANCIC. A morote-seoi-nage was the difference as PORTELA prevailed by a waza-ari score to set the crowd into party mode before stopping to pose for pictures and sign autographs. 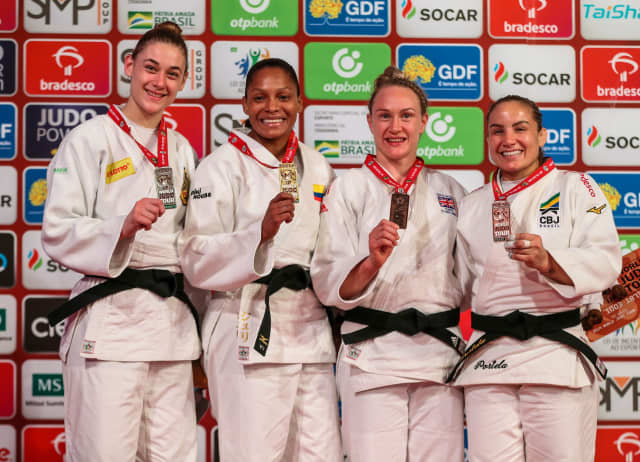 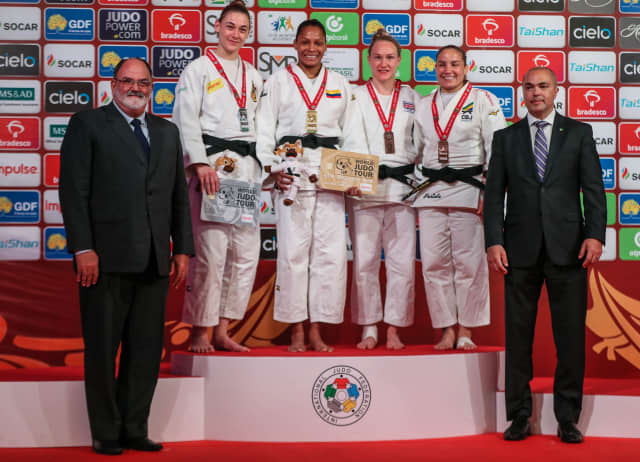 Zagreb Grand Prix bronze medallist Musa MOGUSHKOV (RUS) won Grand Slam gold for the fourth time as he dispatched the unfancied world number 76 David LIMA (BRA) in just 36 seconds. Double world bronze medallist MOGUSHKOV floored the Brazilian judoka with a beautiful tai-otoshi that was even applauded by pockets of home fans. London 2012 Olympian MOGUSHKOV will now be installed as the front-runner in the Russian team at -66kg for the Games while LIMA can be ecstatic about his day’s work having graced a Grand Slam final in only his second outing at an IJF major. 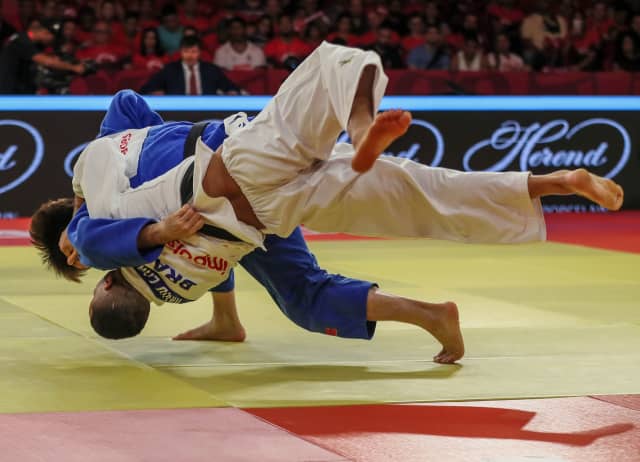 In the first semi-final LIMA benefited from an error-strewn display by Nils STUMP (SUI) who accumulated three shidos in as many minutes to receive hansoku-make. 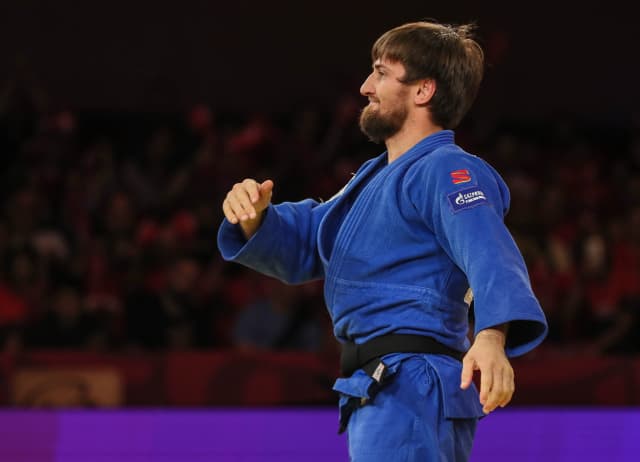 In the second semi-final former world champion HASHIMOTO Soichi (JPN) lived dangerously against MOGUSHKOV as he resorted to trying to force his opponent to receive a third penalty but instead was on the receiving end of a decisive shido. As expected there was nothing between the two in a scoreless contest, until HASHIMOTO was penalised for dropping and had to concede the contest and an anticipated place in the final.

The first bronze medal was won by HASHIMOTO who salvaged a place on the medal podium at the expense of Tel Aviv Grand Prix silver medallist Giovanni ESPOSITO (ITA). The Ippon Hunter from Japan launched the Italian for a waza-ari score with a seoi-nage in the closing seconds as he bombarded his rival with attacks and proved why he is regarded as one of the most spectacular throwers in the sport. Fans will look forward to seeing what’s next for both men with Tokai standout HASHIMOTO likely to be in the frame for honours at the Osaka Grand Slam next month.

The second bronze medal went to Montreal Grand Prix bronze medallist Anthony ZINGG (GER) who persevered to defeat STUMP after 45 seconds of golden score with a uchi-mata for a contest-winning waza-ari score. 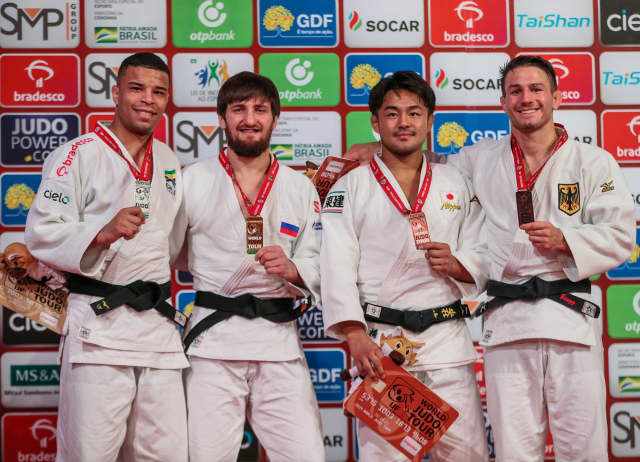 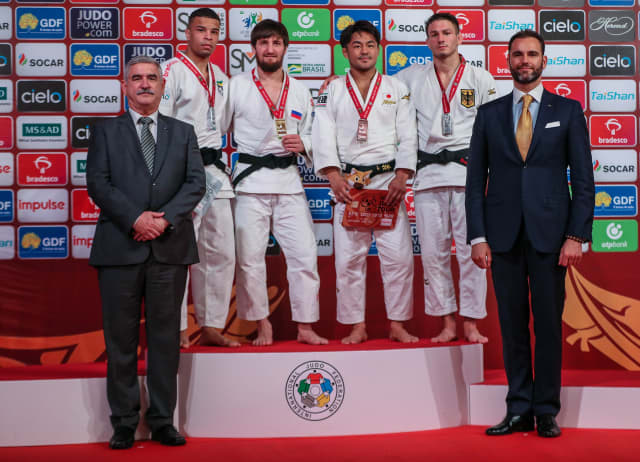 Olympic bronze medallist NAGASE Takanori (JPN) stepped up his bid for Tokyo 2020 selection by winning his fifth Grand Slam title with a win over former world bronze medallist Vedat ALBAYRAK (TUR). Former world champion NAGASE has double world silver medallist FUJIWARA Sotaro and World Judo Masters winner SASAKI Takeshi to contend with at home but did his part today as he maintained his imperious Grand Slam record with nine medals from nine Grand Slam outings. The Japanese judoka will storm up the rankings from his lowly position of number 27 in the world after ALBAYRAK was penalised for a third time for passivity after 56 seconds of golden score. 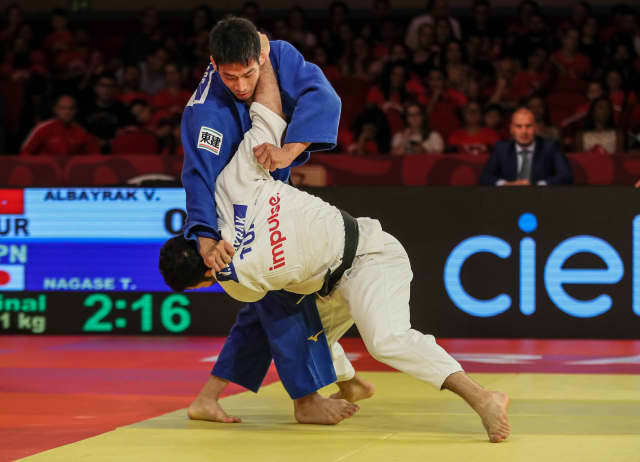 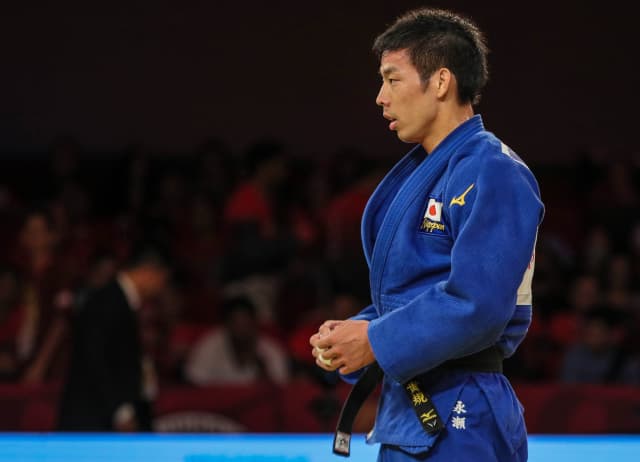 The first bronze medal was won by five-time Grand Prix winner Alan KHUBETSOV (RUS) who had to put in a shift to emerge triumphant against PARLATI. KHUBETSOV won courtesy of a waza-ari score to win his seventh medal on the Grand Slam stage and send PARLATI back to the drawing board.

The second bronze medal went to EGUTIDZE who ambushed Olympic champion Khasan KHALMURZAEV (RUS) five seconds into golden score with a gigantic ura-nage for ippon. The Portuguese judoka thumped his chest and jumped into the arms of his coach in celebration as he savoured opening his Grand Slam medal account in style. 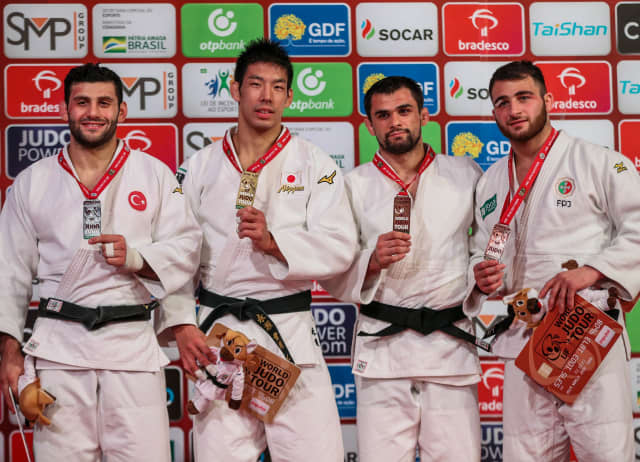 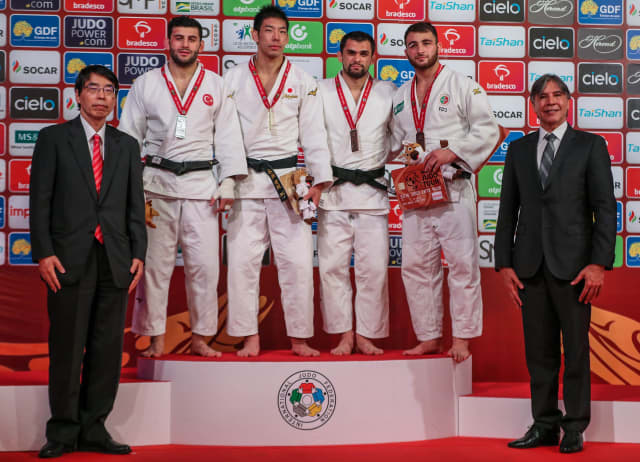 VIDEO
Happy Holidays and Happy New Year from the IJF