The hosts of the fifth Grand Slam of the season have not only successfully staged a first-class major event on the IJF tour but have also marked one of the most important days on the international judo calendar.

On 28 October, the birthday of judo founder Jigoro Kano, the judo world will celebrate the 2019 edition of #WorldJudoDay. The annual celebration for all members of the judo family was introduced in 2011 and has seen thousands of activities all over the world to mark the day which is dedicated to coaches, fans, judoka and everyone with a passion for one of the world’s most widely practiced sports.

This year the IJF invites all judoka, all judo clubs and national federations, to take part in a new initiative called 'Plant a Tree' as we participate in the common effort to provide a better future for our children.

In judo we are competing for a better world and the IJF has invited everyone to take a small step and educate the youngest generation in the preservation of our environment.

The CBJ have showcased their commitment to #WorldJudoDay during the Brasilia Grand Slam by publishing a video promoting the day and the cause to their highly-receptive judoka.

Brazilian judo have been asked to film and share videos of their contributions to the #PlantATree cause and the CBJ will then publish a compilation on their social media platforms on #WorldJudoDay.

Also, the children carrying the essential items of each judoka through the field of play were using eco-friendly bags which introduced the young volunteers to the concept in addition to notepads and pencils displaying the logos which were distributed during all three days. 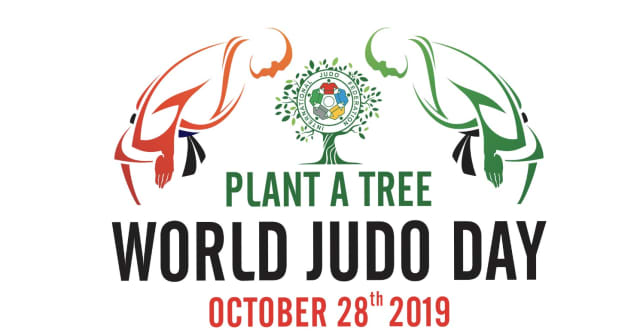 Former world bronze medallist Kaliema ANTOMARCHI (CUB) defeated Welsh star Natalie POWELL (GBR) after 56 seconds of golden with a ura-nage for ippon. Irfon Judo Club’s POWELL, who has won 19 Grand Prix medals, was countered in added time as ANTOMARCHI topped a Grand Slam medal podium for the first time and added to Cuba’s medal haul on day three. World number five POWELL and world number 13 ANTOMARCHI are always there or there abouts on the IJF stage and will no doubt renew acquantances in the near future. 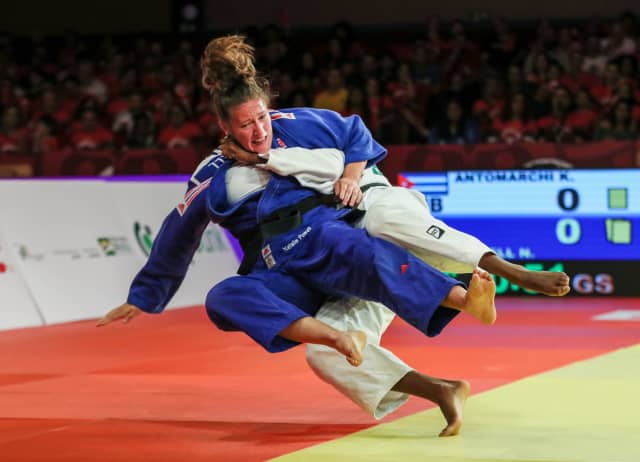 In the first semi-final four-time Grand Prix winner CHEN Fei (CHN) was disqualified against ANTOMARCHI after going out of the area to receive her third and final shido. 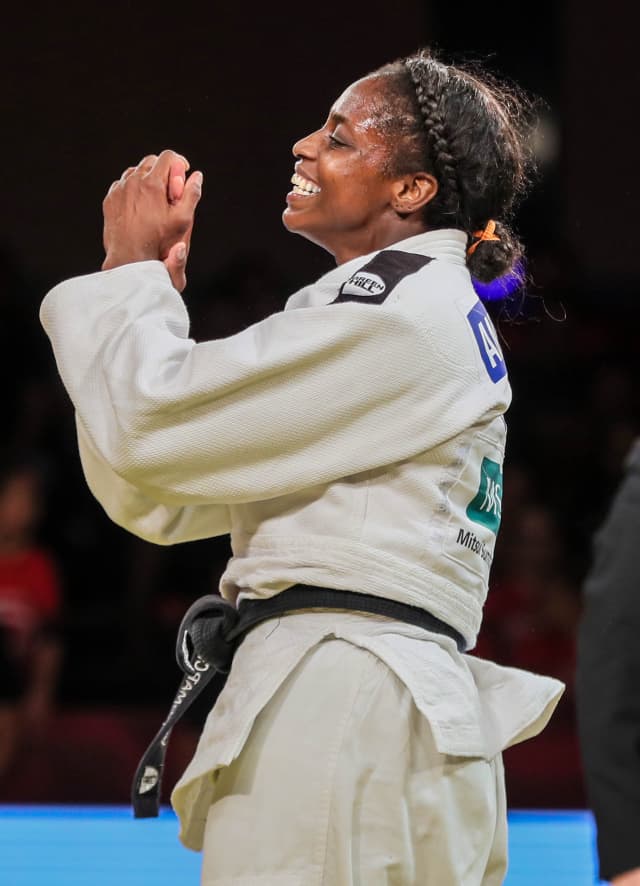 In the second semi-final POWELL launched world number seven Anna Maria WAGNER (GER) with 42 seconds left with a huge ura-nage for ippon and a place in the final.

The first bronze medal contest was won by WAGNER who threw world number 11 Luise MALZAHN (GER) for ippon with 62 seconds left on the clock. The Tokyo 2020 candidates travelled to the other side of the world together and ended up fighting each other in their last respective contest of the day. WAGNER underlined that she has the edge over the more experienced MALZAHN in the race for the Olympics with te-waza before the compatriots showed their respect for each other with a handshake and a hug.

The second bronze medal was won by two-time Olympic medallist and former world champion Audrey TCHEUMEO (FRA) after an insipid display from CHEN. The Chinese judoka disappointed against the out-of-form Frenchwoman who bagged a return to an IJF medal podium for the first time since July 2018 after CHEN was disqualified for picking up three penalties. 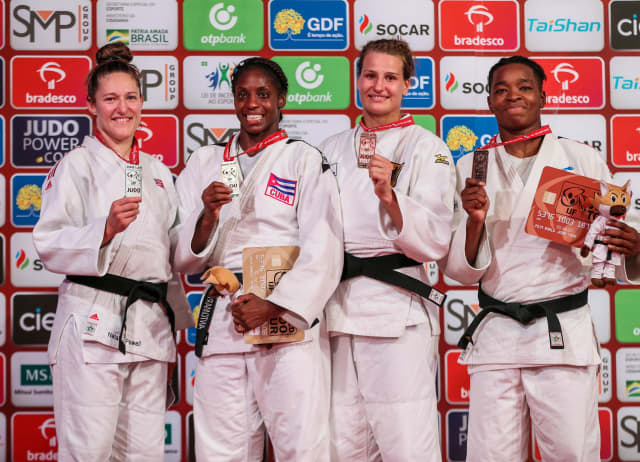 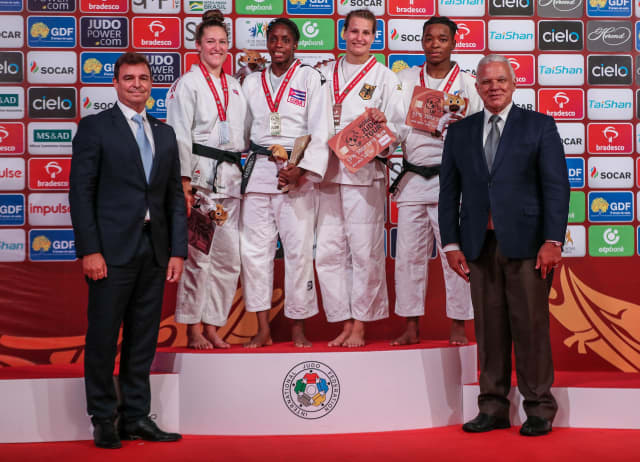 World number eight Beatriz SOUZA (BRA) beat world silver medallist Maria Suelen ALTHEMAN (BRA) for the first time on the IJF stage to claim her first Grand Slam gold medal. The 21-year-old defeated world number three ALTHEMAN, 31, after throwing for a waza-ari score and pinning down her teammate with a kesa-gatame. With 90 seconds remaining SOUZA took her career to new heights and will now close in on the two-time Olympian on the IJF World Ranking List. 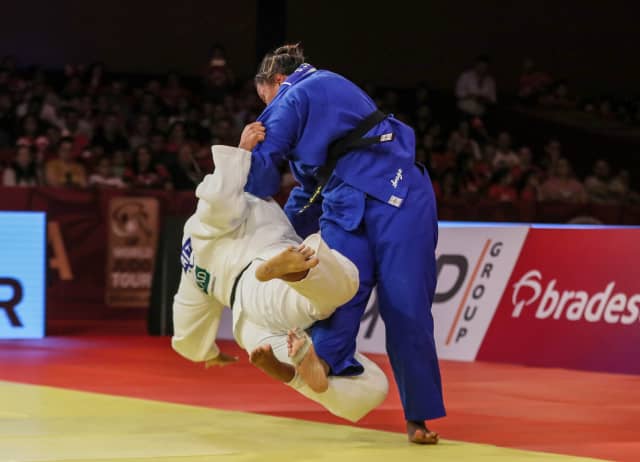 In the first semi-final two-time world silver medallist Maria Suelen ALTHEMAN (BRA) proved to be too strong for world number 23 Rochele NUNES (POR). The contest was tied at a waza-ari score apiece after four minutes and it was ALTHEMAN who progressed to the final after flooring her former teammate for a second waza-ari score from a makikomi.

In the second semi-final SOUZA reigned over Tbilisi Grand Prix winner Julia TOLOFUA (FRA) after the French judoka was dismissed after picking up her third shido for passivity with 58 seconds left on the clock.

The first bronze medal was awarded to TOLOFUA who threw Hohhot Grand Prix bronze medallist Jasmin GRABOWSKI (GER) for ippon with an uchi-mata on the edge of the area with 44 seconds remaining.

The second bronze medal was won by former Brazil international NUNES who enjoyed a happy homecoming by beating world number 46 XU Shiyan (CHN) with a quickfire waza-ari from an o-uchi-gari after only 24 seconds. 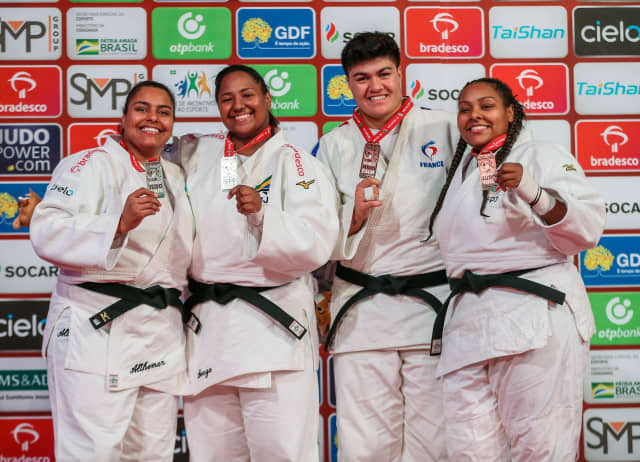 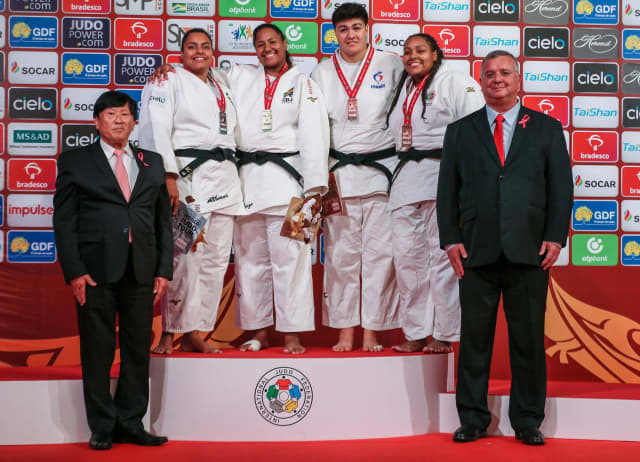 Former world champion Nikoloz SHERAZADISHVILI (ESP) defeated former world silver medallist Ivan Felipe SILVA MORALES (CUB) in a rematch of the 2018 Worlds final. The Spaniard extended his winning record over the Cuban to 3-1 with a trademark uchi-mata which was worth a waza-ari score which separated the rivals after four minutes of compelling action. 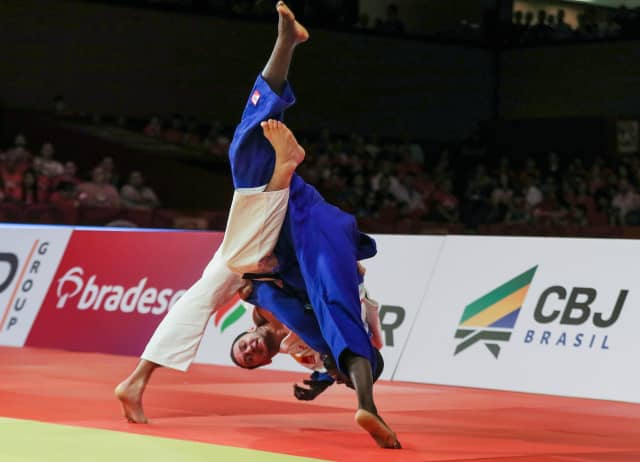 In the first semi-final SHERAZADISHVILI pinned down Tashkent Grand Prix winner Marcus NYMAN (SWE) and the exhausted Swede elected to tap out immediately. 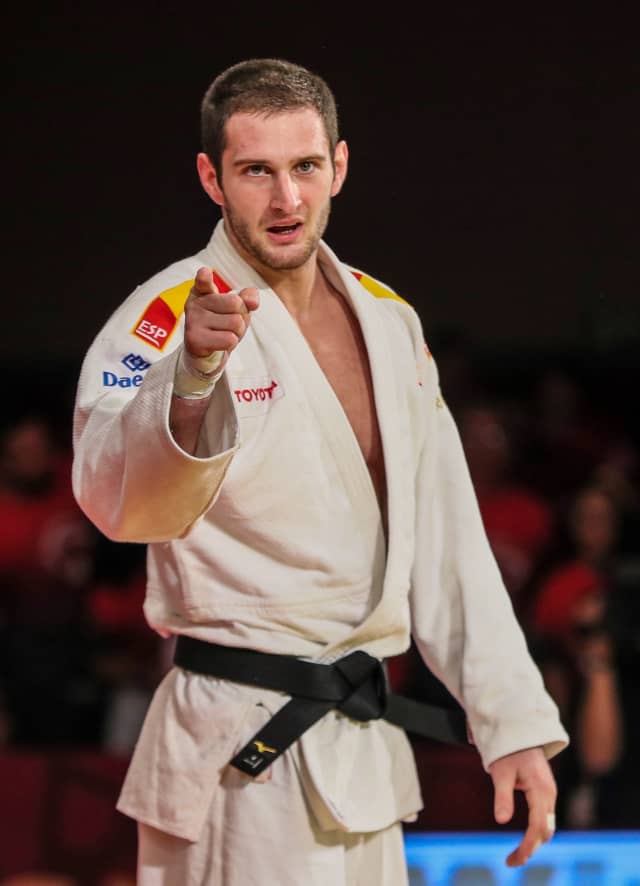 In the second semi-final SILVA MORALES forced European Games winner Mikail OZERLER (TUR) to tap out while under immense pressure from a holddown.

The second bronze medal went to world bronze medallist Nemanja MAJDOV (SRB) after NYMAN stepped out of the area for a third time and was disqualified. World number six MAJDOV is hitting his stride now at a crucial time in the Olympic qualification period and there’s still a lot more to come from the young Serbian judoka. 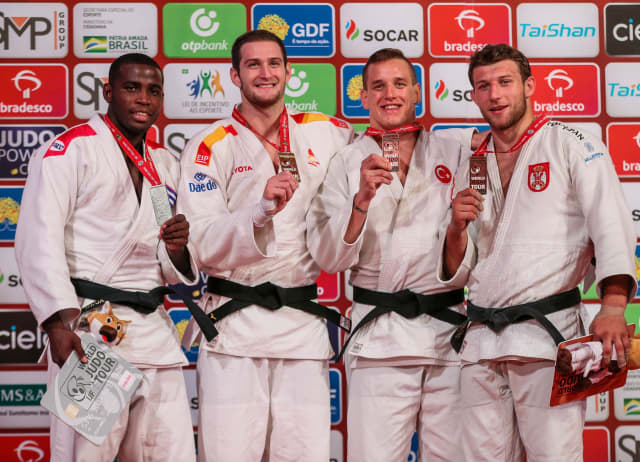 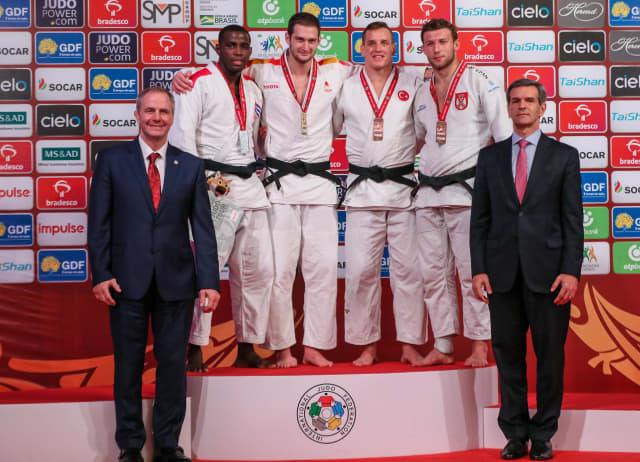 -100kg: Heir to INOUE wins gold with the Japanese legend in the coaching chair

World number 15 IIDA Kentaro (JPN) had the measure of world number 22 Rafael BUZACARINI (BRA) as the Japanese youngster impressed his coach and legendary champion INOUE Kosei. The 21-year-old, who has often been dubbed the ‘new INOUE’, has a devastating uchi-mata just like this mentor but it was his morote-seoi-nage which earned his second Grand Slam gold medal with 64 seconds remaining on the clock. 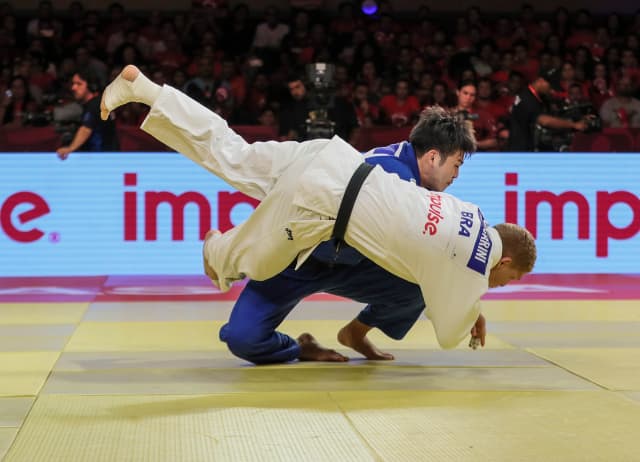 In the first semi-final number one seed Ramadan DARWISH (EGY) was below-par against BUZACARINI as the home judoka profited from three errors by the Egyptian judoka. DARWISH was disqualified after picking up three yellow cards while the Brazilian had an unblemished record in a scoreless contest. 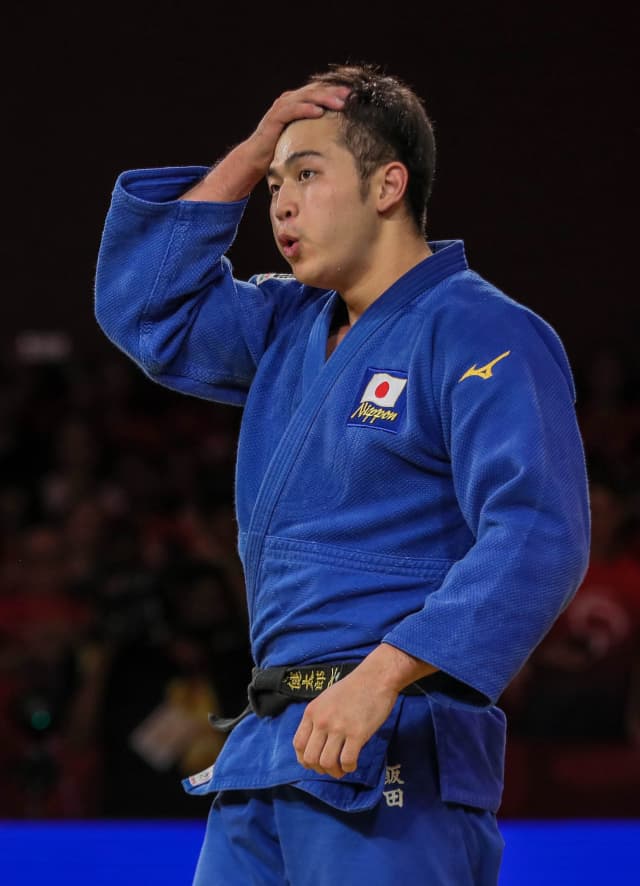 In the second semi-final IIDA saw off five-time world medallist Kirill DENISOV (RUS) after just 53 seconds with a ken-ken uchi-mata for ippon.

The first bronze medal was won by DENISOV who sent Cancun Grand Prix winner Niiaz BILALOV (RUS) flying over for ippon with a picturesque throw at the halfway point of the contest. 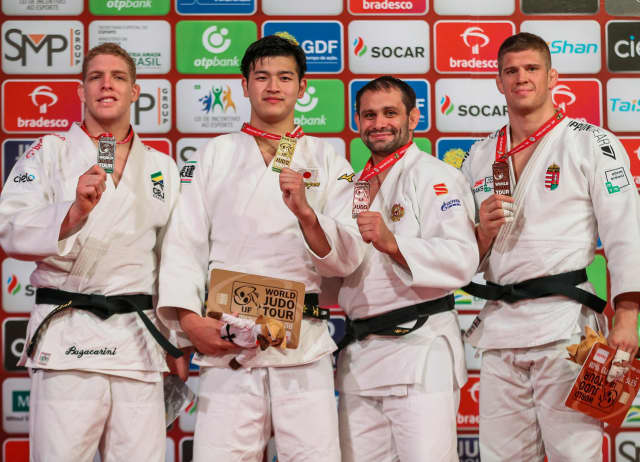 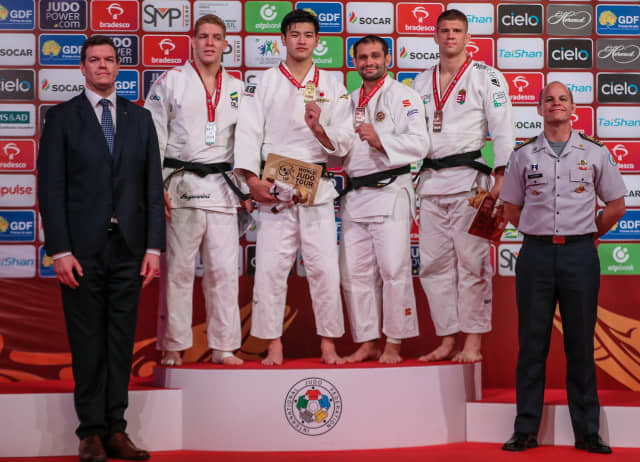 Olympic heavyweight champion Teddy RINER (FRA) made light work of former world silver medallist David MOURA (BRA) in the last contest at the first edition of the Brasilia Grand Slam. RINER moved to 4-0 against Brazil’s man-mountain as he rushed past the home hope in 20 seconds by ippon from an o-soto-makikomi. Heavyweight king RINER, 30, who was competing for the second time this year, will jump up the rankings after bagging 1000 points having started the day ranked number 58 in the world. 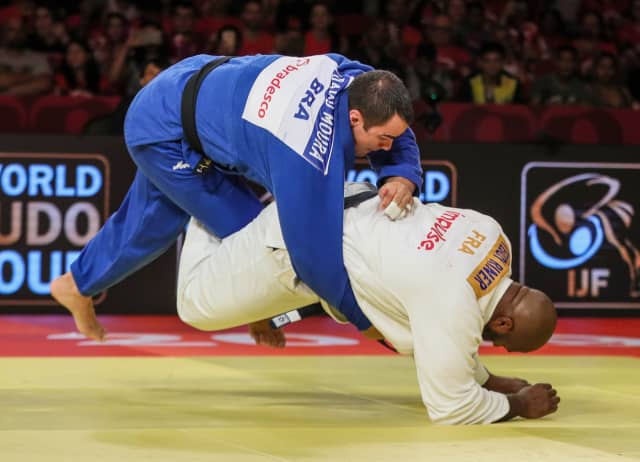 The toughest assignment for the 10-time world champion proved to be his opener against world number 13 KAGEURA Kokoro (JPN). The double Olympic champion needed six minutes of golden score to put away the gutsy Japanese judoka who will relish another opportunity against the Frenchman and that could materialise this year with RINER now back in competition mode. 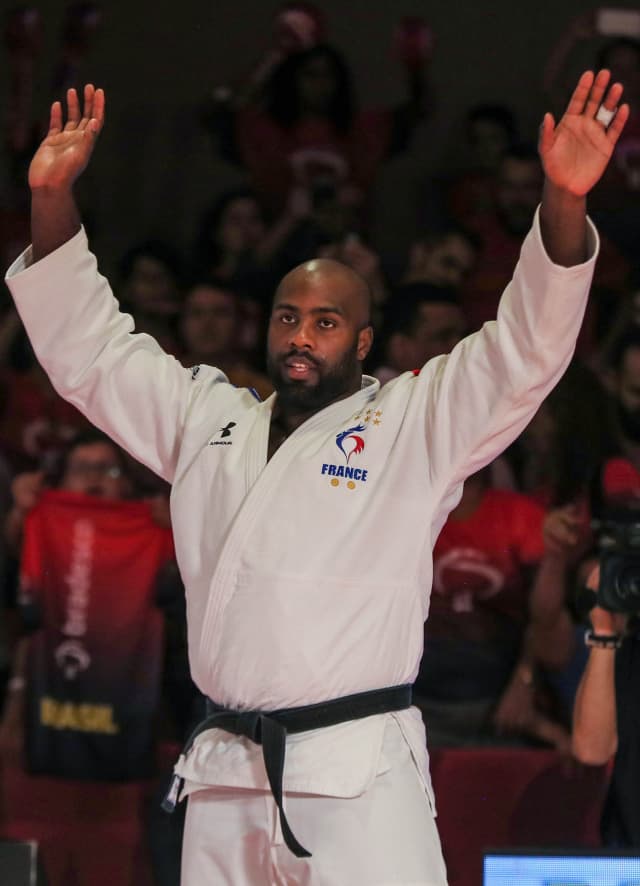 In the first semi-final world heavyweight champion Lukas KRPALEK (CZE) received his marching orders against RINER with six seconds left on the clock.

In the second semi-final double Olympic bronze medallist Rafael SILVA (BRA) was penalised three times against MOURA to send the latter into the men’s heavyweight final.

The first bronze medal was won by world number 10 Inal TASOEV (RUS) who produced a stunning finish on the ground to submit SILVA with shime-waza after 37 seconds of golden score.

The second bronze medal went to KRPALEK who called on his vast ne-waza repertoire as he outmanoeuvred former world bronze medallist Yakiv KHAMMO (UKR) on the ground to create the space to apply the shime-waza and make the Ukrainian tap out at the halfway point of the contest. 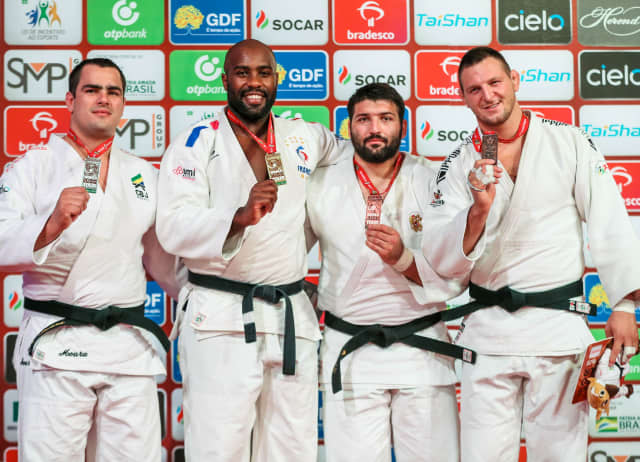 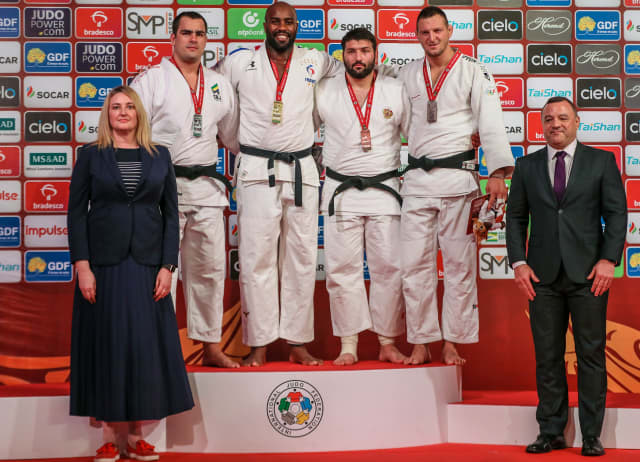