By Mark Pickering on 06. Oct 2019
Share
The first edition of the Brasilia Grand Slam opened on Sunday as the men's -60kg and -66kg categories were contested along with the women's -48kg, -52kg and -57kg categories. 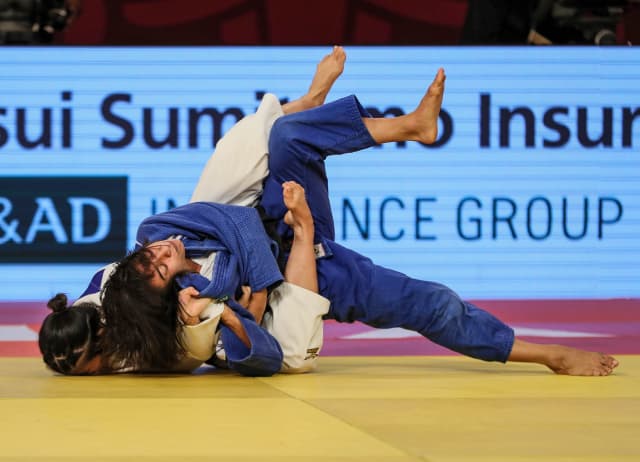 Two-time Grand Slam bronze medallist COSTA was pencilled in as the favourite by many experts and lived up to those expectations as she produced a solid performance to claim her first Grand Slam title. COSTA was unfazed by the chants of Brazil by the capacity crowd and countered a morote-seoi-nage with a sode-tsurikomi-goshi for the first and only score in the -48kg final. 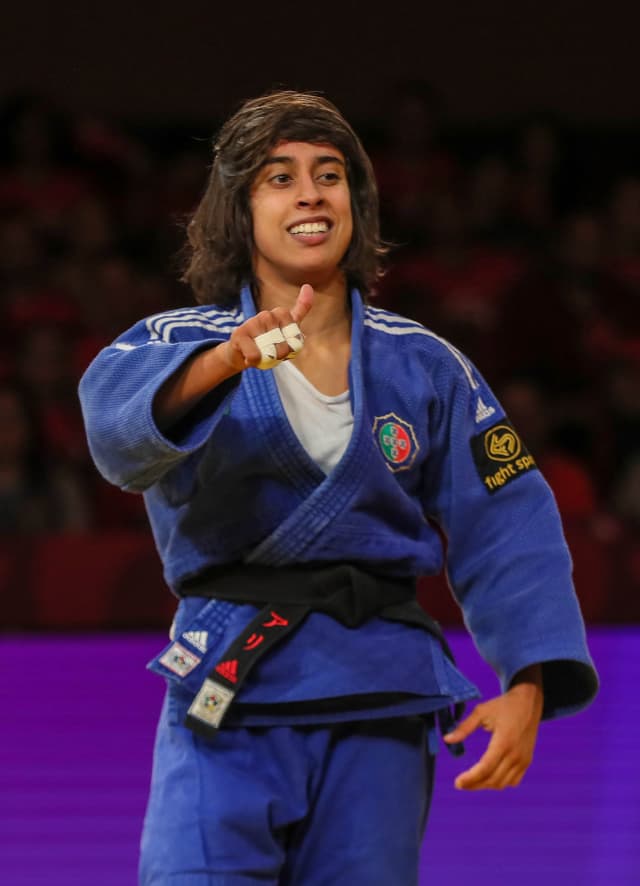 In the second semi-final COSTA saw off Hohhot Grand Prix bronze medallist Katharina MENZ (GER) by the same scoreline to advance to the first final of the competition.

The second bronze medal was won by Baku Grand Slam winner Laura MARTINEZ ABELENDA (ESP) who edged past CSERNOVICZKI by a waza-ari score. 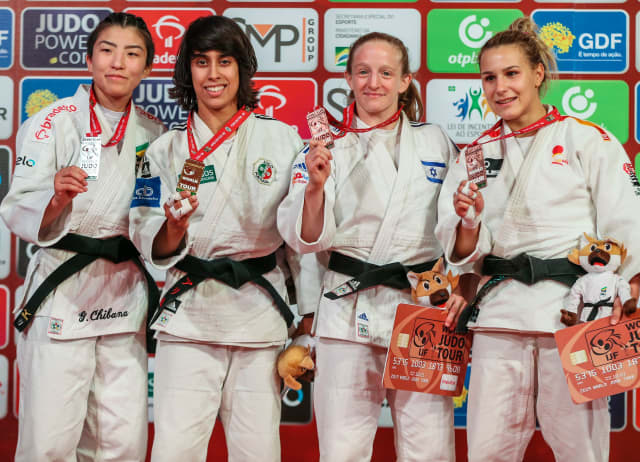 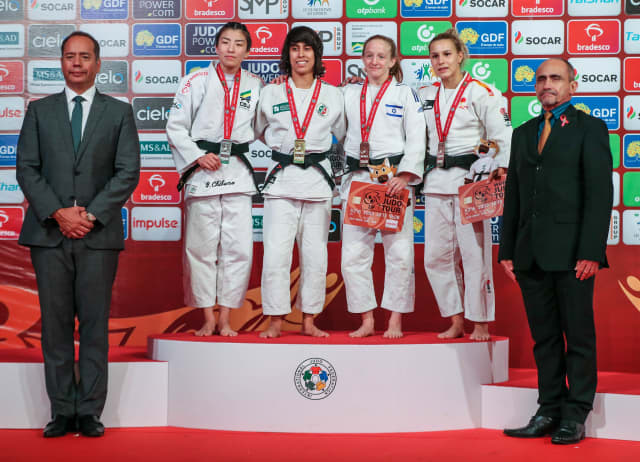 Rio 2016 Olympic silver medallist Odette GIUFFRIDA (ITA) marked her return to Brazil by claiming top spot on the podium at the first Brasilia Grand Slam. The Italian submitted Baku Grand Slam bronze medallist Larissa PIMENTA (BRA) with shime-waza at the halfway point of the final to register her country’s first medal in Brasilia. 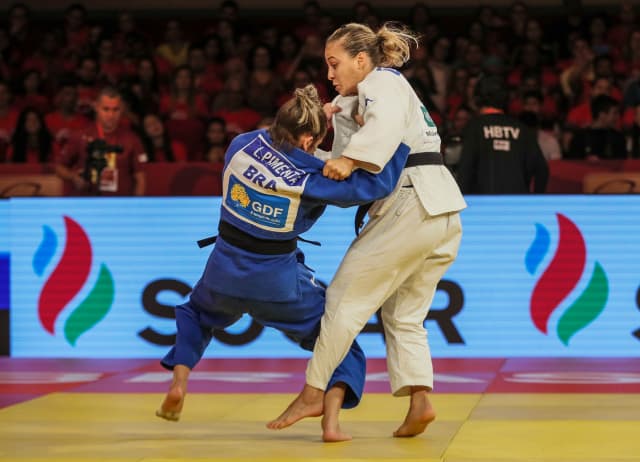 In the first semi-final former world silver medallist TSUNODA Natsumi (JPN) lost to GIUFFRIDA after she was penalised for a third time after five and a half minutes of golden score for passivity in a scoreless contest. 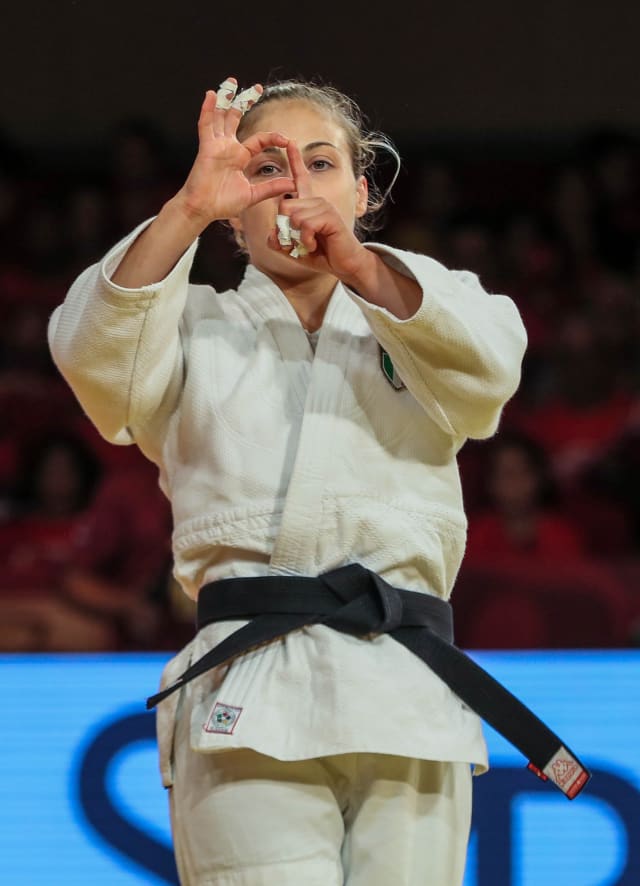 In the second semi-final PIMENTA forced former Rio Grand Slam winner Eleudis VALENTIM (BRA) to pick up her third shido to seal a place in the gold medal contest.

The first bronze medal was awarded to VALENTIM who was overcome with emotion after she beat Cancun Grand Prix bronze medallist Joana RAMOS (POR). Brazil’s VALENTIM jumped into the arms of her coach and hugged her adoring fans as she lapped up a raucous home ovation. RAMOS lost out by two waza-ari scores as the hosts continued to swell their medal account on the opening day.

The second bronze medal was won by TSUNODA who outclassed world number 13 Agata PERENC (POL). Japan’s number three all but conceded her Tokyo 2020 Olympic hopes with only a bronze medal return as she threw the Polish judoka with a tomoe-nage for ippon. TSUNODA recently won the All Japan Corporate Championships in the -48kg category and may revisit that option for the Kodokan Cup in November in Chiba. 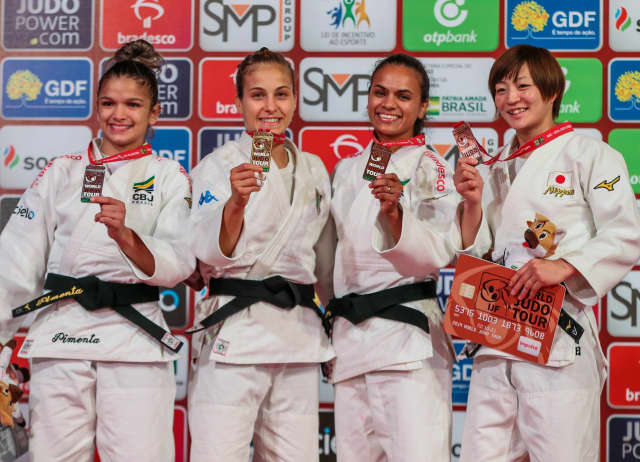 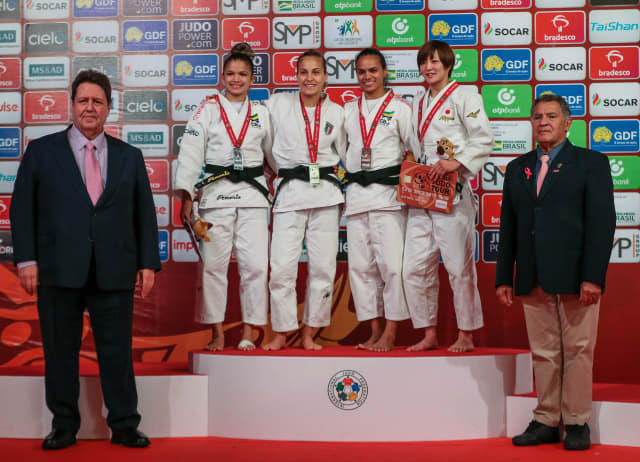 Two-time world medallist Nekoda SMYTHE-DAVIS (GBR) stormed past Grand Slam debutant Ketelyn NASCIMENTO (BRA) in the -57kg final to win Grand Slam gold for the second time in her flourishing career. Londoner SMYTHE-DAVIS, who won the Düsseldorf Grand Slam last year, got stronger as the contest went on and pulled away from her new opponent in golden score with a thunderous o-soto-gari for ippon after two minutes of additional time. 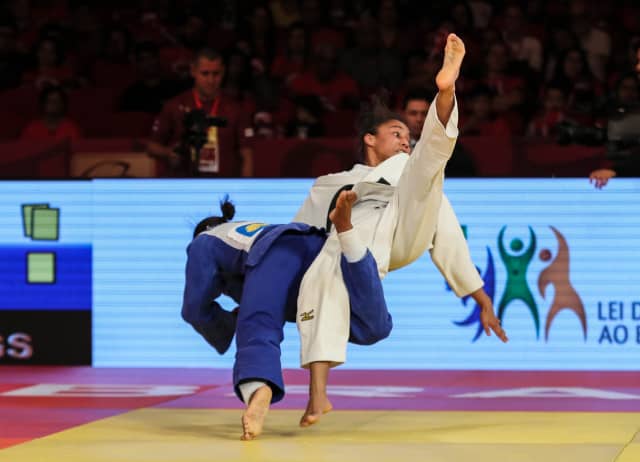 In the first semi-final Olympic champion Rafaela SILVA (BRA) was stunned by her younger teammate NASCIMENTO who prevailed by a waza-ari score. SILVA has been on the receiving end of an upset from her new senior teammate before at the Trofeu Brasil Interclubes last year but could not reverse the outcome this time around. 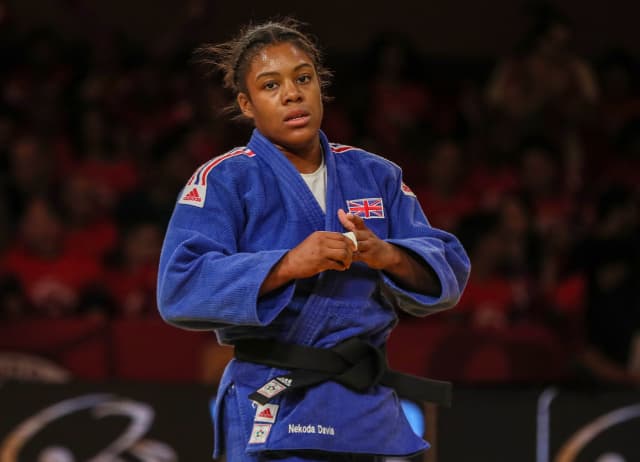 In the second semi-final former Tashkent Grand Prix winner Theresa STOLL (GER) lost out in golden score against SMYTHE-DAVIS by a waza-ari after eight minutes of added time.

The first bronze medal was awarded to STOLL who launched Düsseldorf Grand Slam bronze medallist Sarah Leonie CYSIQUE (FRA) for ippon. Germany got off the mark thanks to STOLL who picked up and planted her French rival for the maximum score for a huge result which will push her into the top five on the IJF World Ranking List.

The second bronze medal was won by SILVA who saw off European Games bronze medallist Telma MONTEIRO (POR) in golden score. The familiar foes, who stood on the medal podium together at Rio 2016, could not be separated in regulation time but SILVA only needed an additional 13 seconds to win by a waza-ari score from an o-uchi-gari. 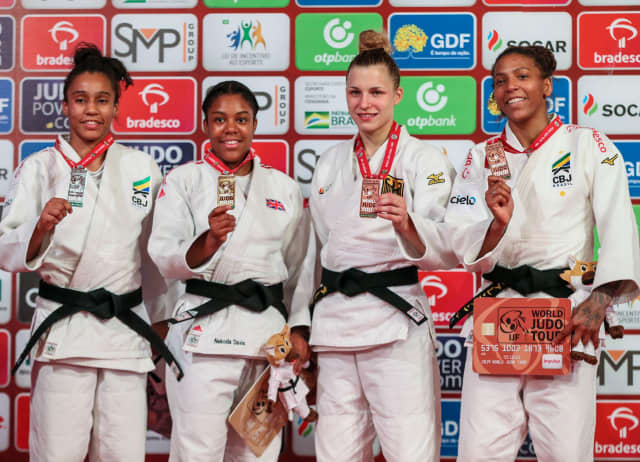 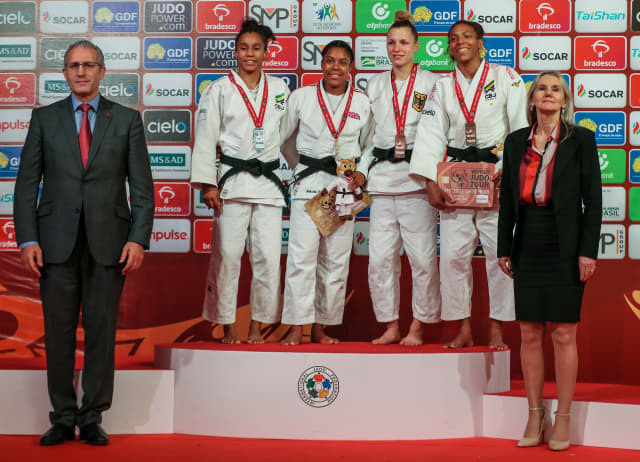 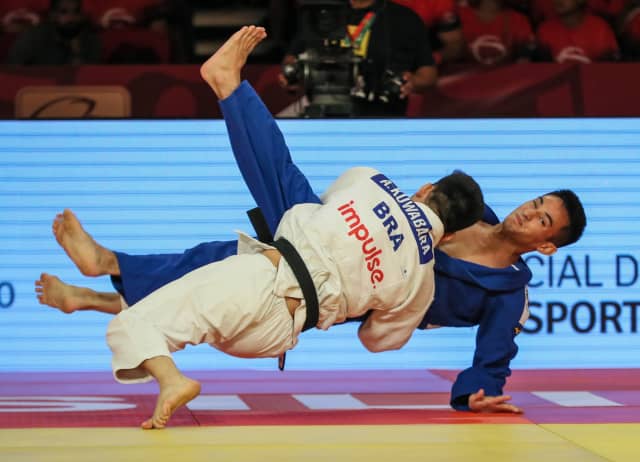 The 27-year-old, who was only selected for the Grand Slam a fortnight ago, was an unexpected finalist and was not content with just contesting the gold medal contest as he threw TAKABATAKE with a majestic ippon from a tani-otoshi in one of the biggest upsets in IJF World Judo Tour history. 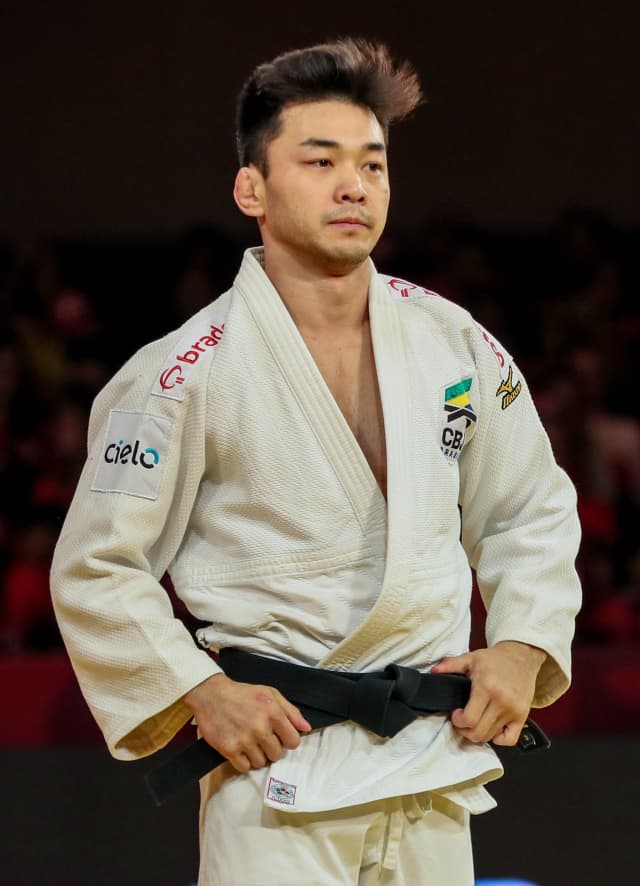 In the second semi-final TAKABATAKE beat Junior World Championships bronze medallist Renan TORRES (BRA) in a crucial win that could have Tokyo 2020 ramifications. The veteran could barely contain his pleasure at beating his compatriot at home as the host nation took over the men’s lightest weight category on day one.

The first bronze medal was won by world number nine Francisco GARRIGOS (ESP) who found a way past TORRES after 82 seconds of added time by a waza-ari score. The Spaniard countered a morote-seoi-nage for the smallest score to win his fourth Grand Slam medal.

The second bronze medal went to YASHUEV after a thriller with world number 90 and Grand Slam newcomer Rodrigo Costa LOPES (POR). While the home crowd were rooting for the Portuguese judoka, YASHUEV kept his composure and salvaged a place on the podium to open his country’s medal account in Brazil. YASHUEV led by a waza-ari score before LOPES fought back and restored parity. The Russian saved his best attack until the closing seconds as he hooked in for a ko-uchi-gake to win by ippon with 15 seconds left on the clock. 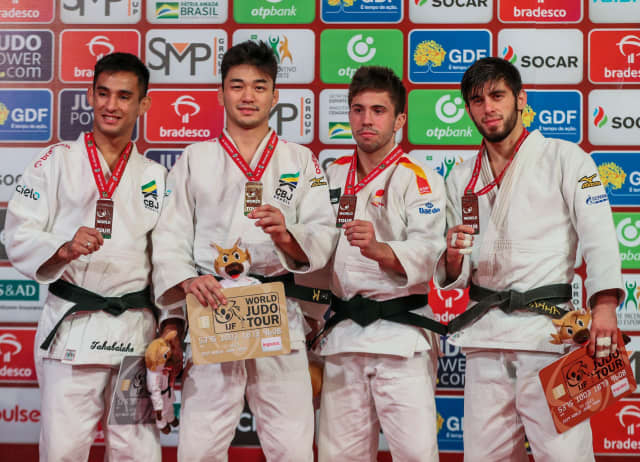 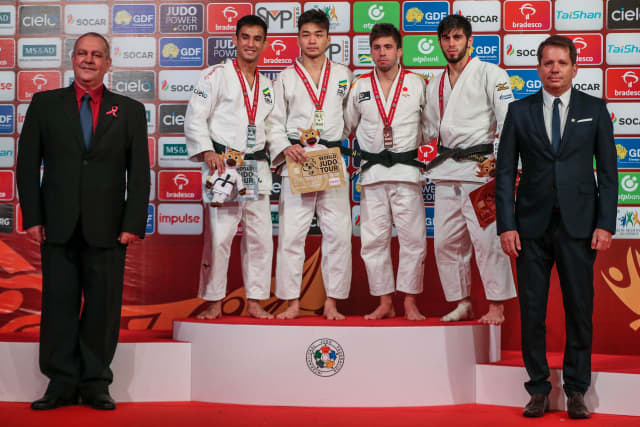 -66kg: Brazil pips Italy in battle of the hot prospects

World number seven Daniel CARGNIN (BRA) grasped his home Grand Slam opportunity with both hands as he recorded his first IJF World Judo Tour victory and, in dream fashion, achieved it on home soil. CARGNIN, 21, conquered fellow young gun and Tokyo 2020 contender Manuel LOMBARDO (ITA) who won the Tel Aviv Grand Prix in January. A single waza-ari score handed the home judoka the win over the 20-year-old and his first at this level before he pointed to the Brazilian flag on his judogi and made the most of his Grand Slam moment. 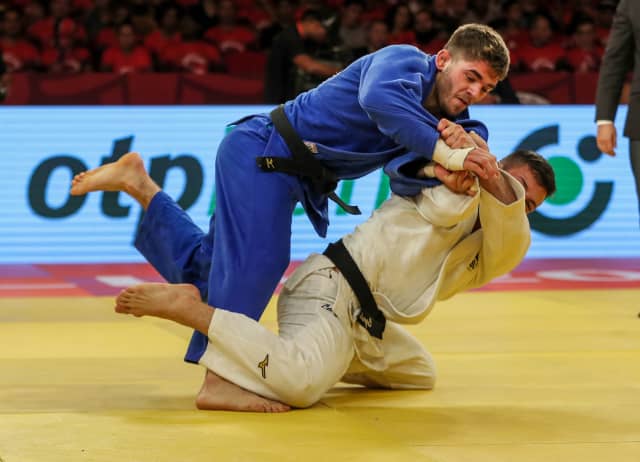 In the first semi-final CARGNIN bested Sebastian SEIDL (GER) after the German judoka received his third and final shido for passivity after one minute of golden score. 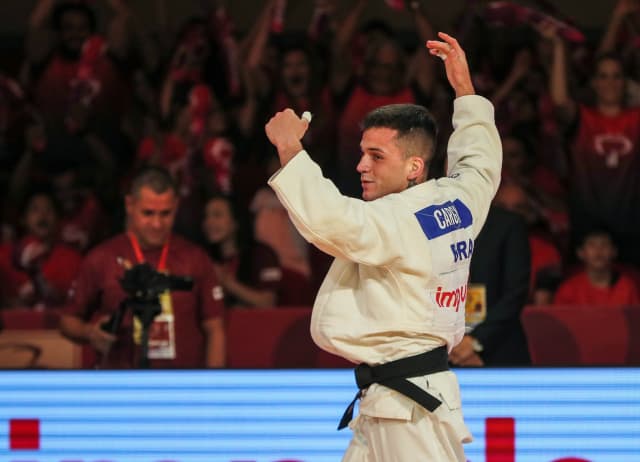 In the second semi-final LOMBARDO outlasted Junior Pan American Championships gold medallist Willian LIMA (BRA) as the young Italian broke the deadlock with 22 seconds left and his timely waza-ari score was enough for a place in the final.

The first bronze medal was won by LIMA who had the measure of three-time Grand Prix winner Abdula ABDULZHALILOV (RUS). Brazil’s fringe players made their mark today and teeenager LIMA was the perfect example as he beat the well-travelled and highly-regarded Russian with a controlled display to open his Grand Slam medal column on his IJF World Judo Tour debut.

The second bronze medal went to Ekaterinburg Grand Slam winner Kilian LE BLOUCH (FRA) after SEIDL was dismissed having received his third shido for passivity in added time. The Frenchman is enjoying the best year of his career while SEIDL will have to go back and study his contests after picking up eight shidos – in just five contests - which cost him dearly. 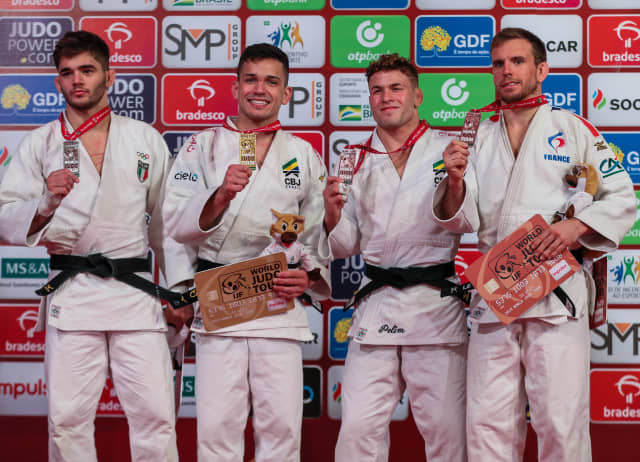 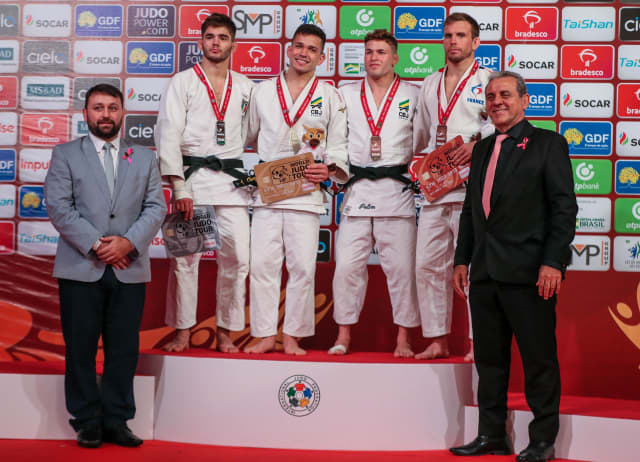 Watch day two of #JudoBrasilia from 11am local time on Monday.