Hohhot Grand Prix winner NOUCHI Aimi (JPN) defeated European Games winner Martyna TRAJDOS (GER) to win her third IJF event of the season and her second Grand Prix title. NOUCHI won the first Tokyo 2020 Olympic qualifier, the Hohhot Grand Prix in May in addition to the Ekaterinburg Grand Slam. TRAJDOS had won their previous meeting back in 2015 at the Tokyo Grand Slam but failed to repeat that result today as world number 13 NOUCHI threw with uchi-mata for a waza-ari score which settled the destination of the gold and silver medals after four minutes. 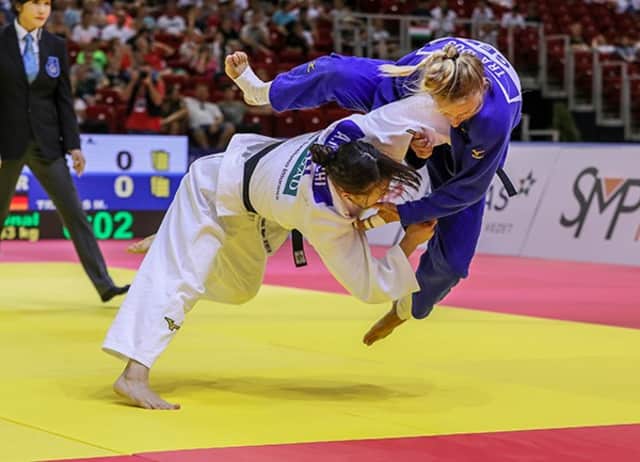 In the first semi-final NOUCHI bested Düsseldorf Grand Slam winner Andreja LESKI (SLO) by a waza-ari score in golden score after a four-minute stalemate. In the second semi-final world bronze medallist Agata OZDOBA-BLACH (POL) lost out to TRAJDOS after the Polish judoka received her third and final penalty. The first bronze medal contest was won by OZDOBA-BLACH who threw The Hague Grand Prix bronze medallist Sanne VERMEER (NED) with an uchi-mata for a waza-ari score. OZDOBA-BLACH now heads into the World Championships in September with high hopes of matching her medal-winning performance from 2017.

The second bronze medal was won by LESKI who countered an osoto-gari attack from The Hague Grand Prix bronze medallist Stefanie TREMBLAY (CAN) to seal a place on the podium by ippon. LESKI has the Olympic champion, Tina TRSTENJAK, for company in Slovenia at -63kg but keeps winning medals and is starting to make a name for herself on the international stage. 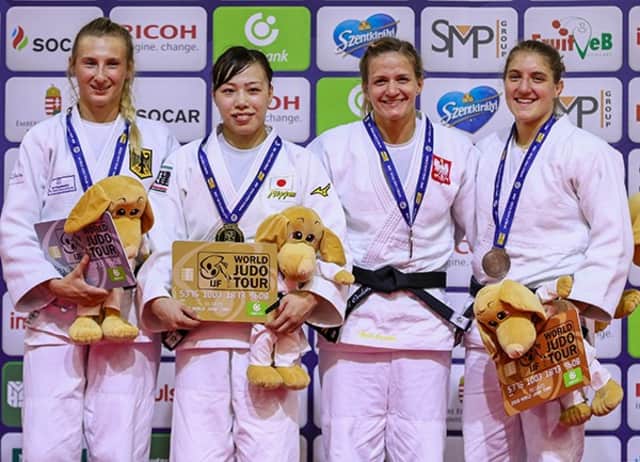 Tunis Grand Prix bronze medallist NIIZOE Saki (JPN) made sure that Japan doubled up on gold in the women’s categories on day two as the young Japanese judoka reigned victorious against Hohhot Grand Prix gold medallist Sanne VAN DIJKE (NED). NIIZOE, 22, is behind world champion ARAI Chizuru and Tokyo Grand Slam winner ONO Yoko in the domestic pecking order but showed her worth in Budapest with a determined display. VAN DIJKE did not have time to work her way into the final as the Japanese launched the Dutchwoman with her favoured uchi-mata for ippon after 25 seconds. 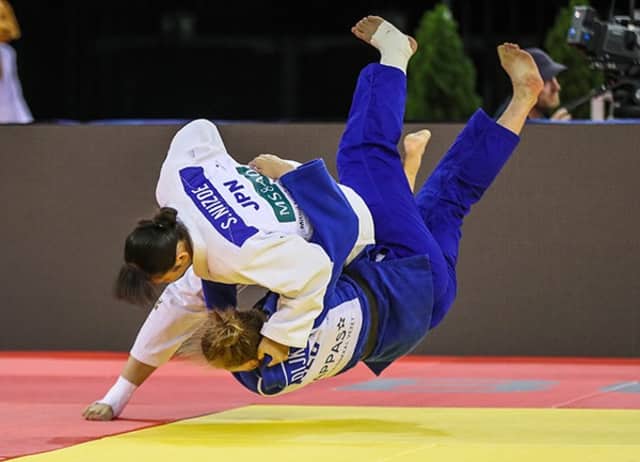 In the first semi-final Olympic bronze medallist Sally CONWAY (GBR) was thrown by NIIZOE with a uchi-mata for ippon. In the second semi-final former world number one Kelita ZUPANCIC (CAN) narrowly lost out to VAN DIJKE by a waza-ari score.

The first bronze medal was awarded to ZUPANCIC who pinned down Antalya Grand Prix winner Anna BERNHOLM (SWE) with a sankaku-gatame for ippon.

The second bronze medal was won by CONWAY with her trademark ne-waza leading her to victory. CONWAY submitted Zagreb Grand Prix bronze medallist Assmaa NIANG (MAR) in the centre of the tatami by turning over her African opponent and extending the right arm of NIANG to win her fifth medal in succession. 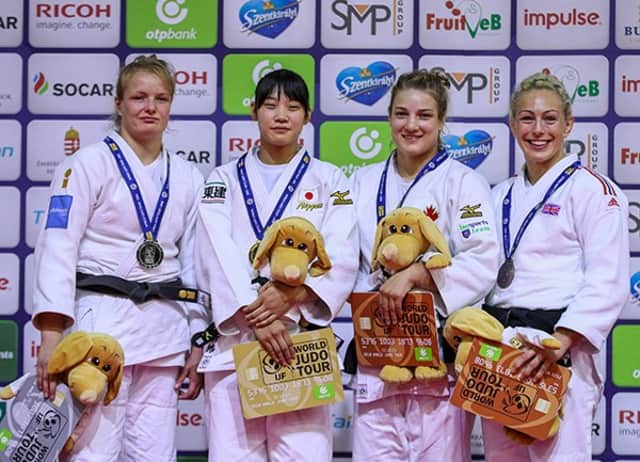 London 2012 Olympic silver medallist UNGVARI Miklos (HUN) ruled the -73kg category on home soil as the Hungarian ace defeated three-time world champion and double Olympic bronze medallist EBINUMA Masashi (JPN). UNGVARI, who turns 38 in October, stood on the London 2012 Olympic podium at -66kg with EBINUMA as the latter took bronze. Since then UNGVARI promptly moved up to -73kg while the Japanese moved up a weight category at the end of 2017. In a thrilling final, the home star countered EBINUMA with 43 seconds left on the clock as he took control and drove over the Rio 2016 Olympic bronze medallist with te-waza for ippon. UNGVARI extended his head-to-head record to 2-0 against Japan’s all-time great having won their one and only previous clash in 2010 in Moscow. UNGVARI lapped up the adulation of the home fans before showing his respect to his opponent EBINUMA who will be relieved to have captured his first international medal at -73kg. 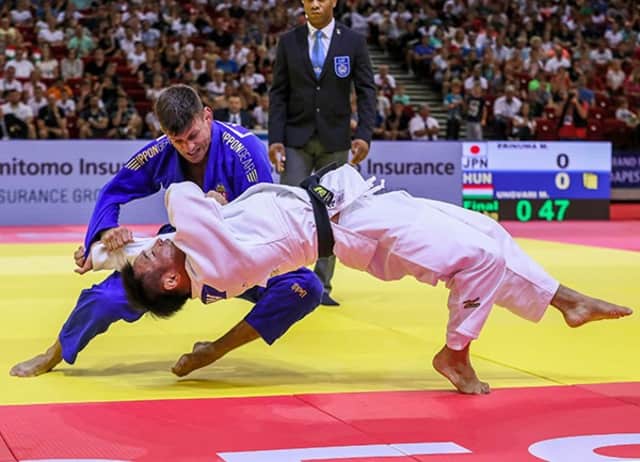 In the first semi-final EBINUMA threw world bronze medallist GANBAATAR Odbayar (MGL) with his seoi-nage in the closing seconds for ippon and a place in the final. In the second semi-final Tokyo Grand Slam silver medallist Arthur MARGELIDON (CAN) fell to UNGVARI by a waza-ari score.

The first bronze medal was won by MARGELIDON who bested Oberwart European Open bronze medallist Giovanni ESPOSITO (ITA). MARGELIDON opened the scoring with a waza-ari from a ko-uchi-gake and wrapped up the victory with a seoi-nage as Canada swiftly made their presence felt on day two.

The second bronze medal went to former Sarajevo European Cup bronze medallist SZABO Frigyes (HUN) who had a dream day as he won his first IJF World Judo Tour medal at the expense of GANBAATAR. The world number 322 comes from a judo family with both of his sisters also having represented their country on the tatami and he brought the Hungarian crowd to their feet with a heroic display. SZABO held down the Mongolian who was surprisingly overpowered on the ground with osaekomi-waza as the hosts claimed their second medal of the competition. 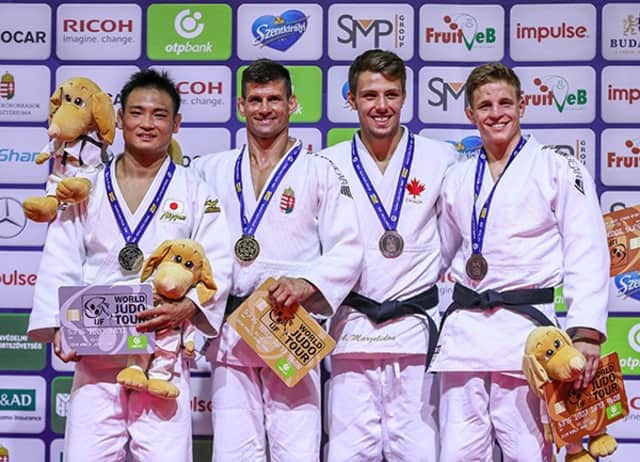 Hohhot Grand Prix bronze medallist Alan KHUBETSOV (RUS) denied Japan, the runaway leaders of the medal table, one more title in Hungary as he outfought Tunis Grand Prix bronze medallist KOHARA Kenya (JPN) in the -81kg final. After an even four minutes, golden score was required to separate the finalists who accumulated two shidos apiece in added time. The tactic from Japanese was to force the Russian to the edge of the mat, encourage him to attack and then counter but that backfired as wily veteran KHUBETSOV proved too powerful with his attacks as he won by ippon. 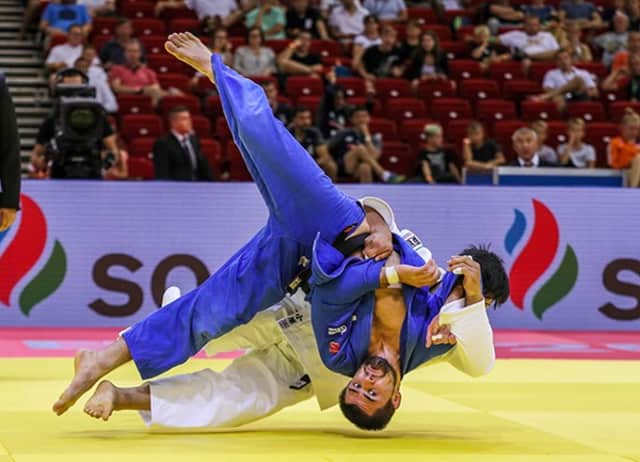 The first bronze medal was won by European champion Sagi MUKI (ISR) who warmed up for the World Championships with an invaluable outing in the Hungarian capital. MUKI took the lead with a makikomi effort against CHOUCHI and added a second and match-winning waza-ari to capture his spot on the podium.

The second bronze medal went to former European bronze medallist Robin PACEK (SWE) who sent DE WIT through the air with a sasae-tsurikomi-ashi for ippon with 64 seconds left on the clock. 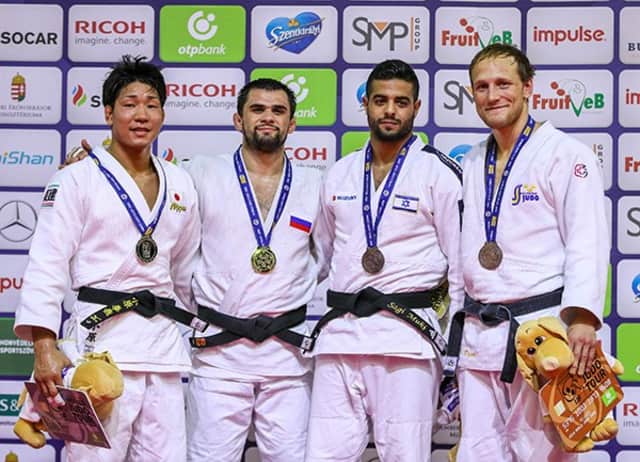 See also
Story
The heiresses of the pioneers