Written by Mark Pickering, Gabriela Sabau on 27. Oct 2018
Share
Fair play for all - judo makes history in Abu Dhabi on the eve of #WorldJudoDay

All eyes were on the Abu Dhabi Grand Slam 2018 on Saturday on the eve of #WorldJudoDay as the historic scenes of friendship and the sporting excellence ushered in a landmark achievement for the competition and judo as Israel’s national judo team competed under their national flag for the first time in a Gulf country. 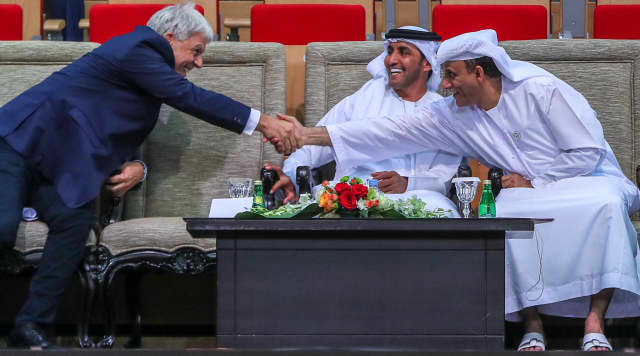 The theme for this year's #WorldJudoDay is Friendship as selected by judo fans in a social media poll and that key value in judo's moral code set the tone for the competition as the IJF realised it's goal of providing all countries with euqal participation rights in Abu Dhabi. The IJF is committed to promoting the moral principles and values of Judo, Olympism and sport in general and the step-by-step process has now led to a watershed moment that extends beyond the sporting landscape. 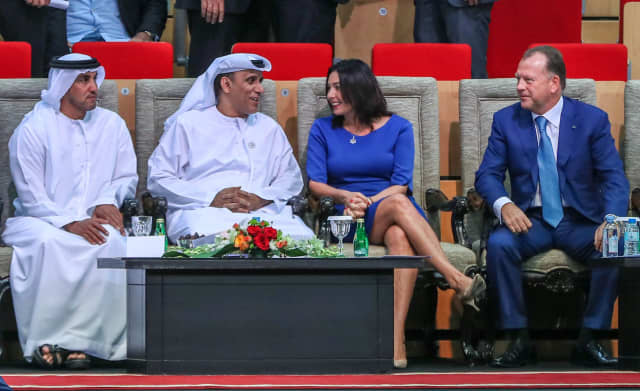 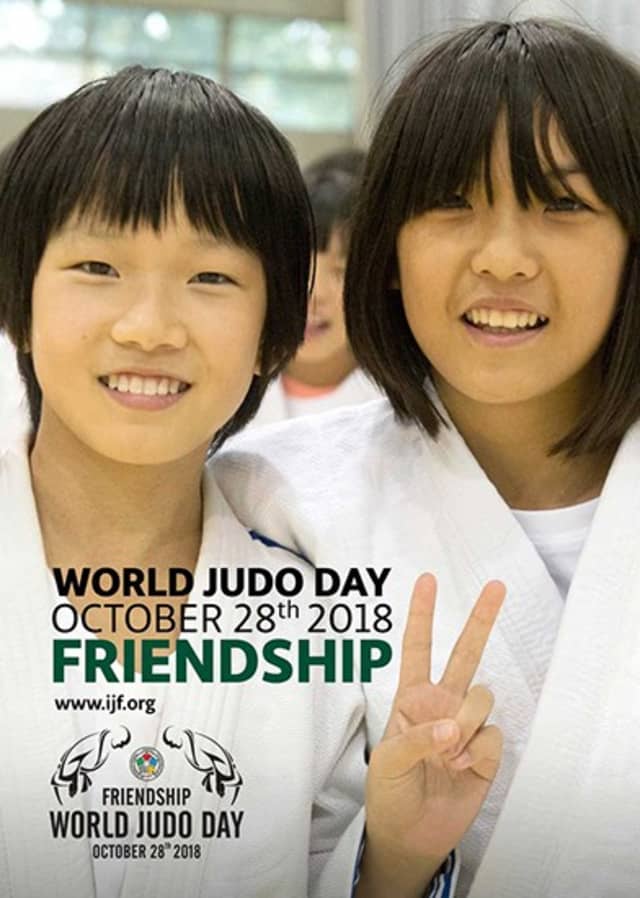 WOMEN -48kg: Mongolia’s Grand Prix maestro MUNKHBAT wins sixth gold World number three MUNKHBAT Urantsetseg (MGL) was back amongst the medals in Abu Dhabi after finishing fifth at the World Championships in September. The former world champion won her first gold medal in 12 months by pinning down Budapest Grand Prix bronze medallist Distria KRASNIQI (KOS) for 20 seconds after initiating a sankaku turnover and was unrelenting in her committed finish to win the first final in the U.A.E. 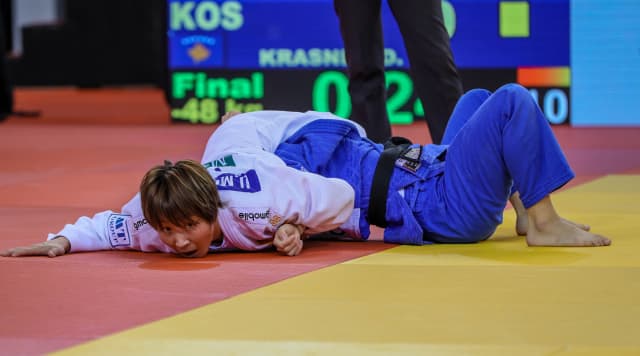 In the first semi-final MUNKHBAT submitted London 2012 Olympic bronze medallist CSERNOVICZKI Eva (HUN) from a sankaku-gatame hold for ippon. In the second semi-final Olympic champion Paula PARETO (ARG) was disqualified againat KRASNIQI after picking up a third shido for a false attack in the closing seconds.

The second bronze medal was won by former Qingdao Grand Prix winner LI Yanan (CHN) who thwarted CSERNOVICZKI by a waza-ari after 12 seconds of added time. LI grew stronger as the contest went on and claimed victory in golden score in front of China Judo Assocation President and new IJF Hall of Fame member XIAN Dongmei. 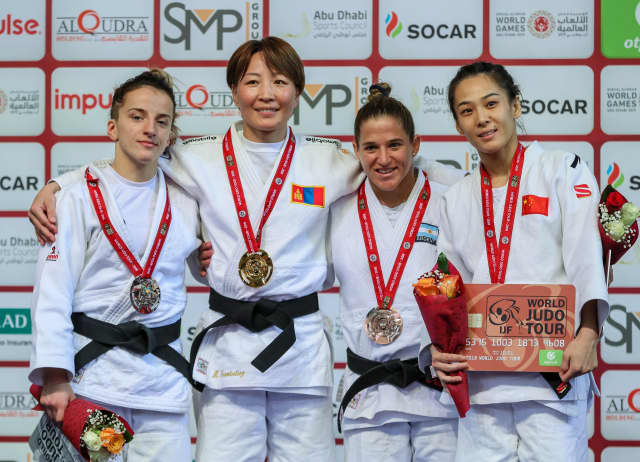 -52kg: GIUFFRIDA wins rematch of Olympic final after injured KELMENDI is forced to withdraw Olympic silver medallist Odette GIUFFRIDA (ITA) won the rematch of the Rio 2016 Olympic final in Abu Dhabi. Both champions were unseeded here and had to work their way through the preliminaries to the final after a testing day for both. Eight-time Grand Prix winner KELMENDI was making her first appearance on the IJF World Judo Tour this year after 12 months on the sidelines through injury. Kosovo’s hero suffered a clash of heads in the preliminaries and was troubled by it during the remainder of her day. KELMENDI had to leave the final on two occasions to receive medical treatment after a ne-waza exchange and the doctors stopped the action with the owner of the gold backpatch deemed unable to continue after a complete bandage wrap could not halt the adverse effects from a laceration on her nose. 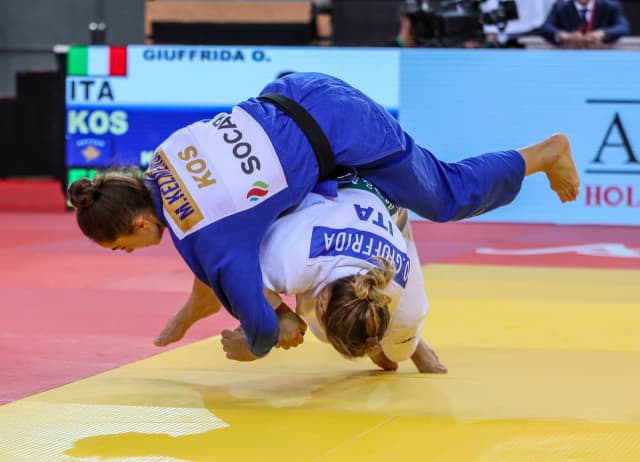 The first bronze medal was awarded to GILES who countered an uchi-mata from Junior World Championships silver medallist Gefen PRIMO (ISR) for a waza-ari score just four seconds from the end of the contest. GILES won her first Grand Slam medal by striking at exactly the right time as PRIMO had no time to respond and missed out an a second podium finish in as many weeks.

The second bronze medal was won by 2017 Abu Dhabi Grand Slam bronze medallist Gili COHEN (ISR) who matched her performance in 2018 by beating RAMOS in golden score. Portugal’s RAMOS was disqualified after three minutes of added time for her third shido in a scoreless contest. 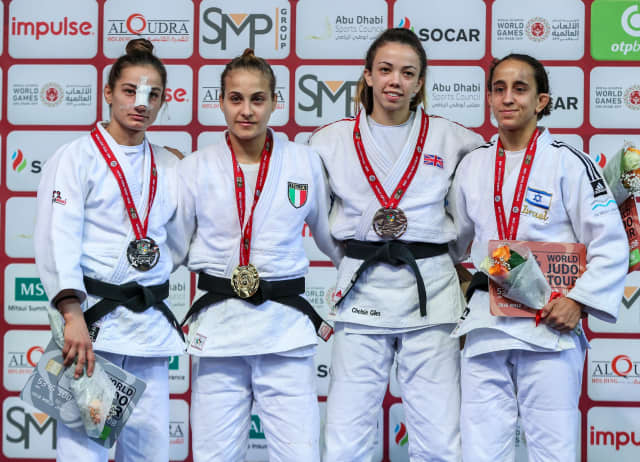 -57kg: Third time lucky for Kosovo as GJAKOVA wins the last final on the opening day in the U.A.E

European champion Nora GJAKOVA (KOS) started her day as the number one seed and finished it as the gold medallist in the -57kg category. The Antalya Grand Prix winner earned her first Grand Slam title with a win over European Championships bronze medallist Anastasiia KONKINA (RUS) after 59 seconds by ippon. All three of Kosovo’s judoka on day one made their respective finals with Paris Grand Slam winner Akil GJAKOVA (KOS) awaiting his turn on Sunday in the -73kg category. 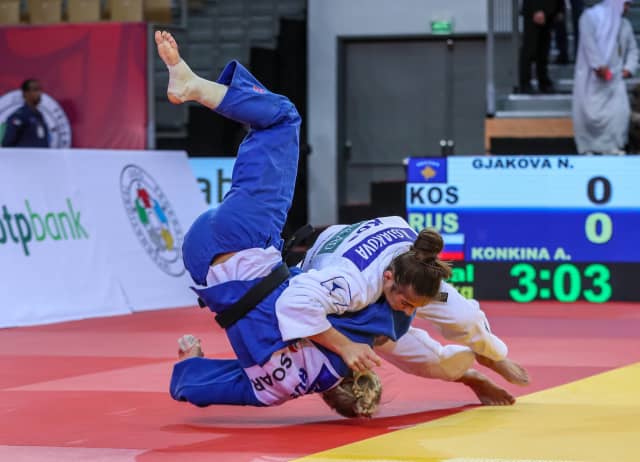 In the first semi-final GJAKOVA silenced the Komatsu supporters as Asian Games bronze medallist LIEN Chen-Ling (TPE) fell by ippon. In the second semi-final London 2012 Olympic bronze medallist Automne PAVIA (FRA) was beaten by KONKINA by ippon with 59 seconds left on the clock.

The first bronze medal was won by Priscilla GNETO (FRA) who beat PAVIA in a battle of London 2012 Olympic bronze medallists. GNETO, who won her Olympic honour at -52kg, is now making her presence felt at -57kg and won this one after PAVIA was reprimanded with her third shido in a lethargic contest.

The second bronze medal was won by Cancun Grand Prix bronze medallist Timna NELSON LEVY (ISR) who threw LIEN after 69 seconds of golden score with koshi-waza for a waza-ari score. 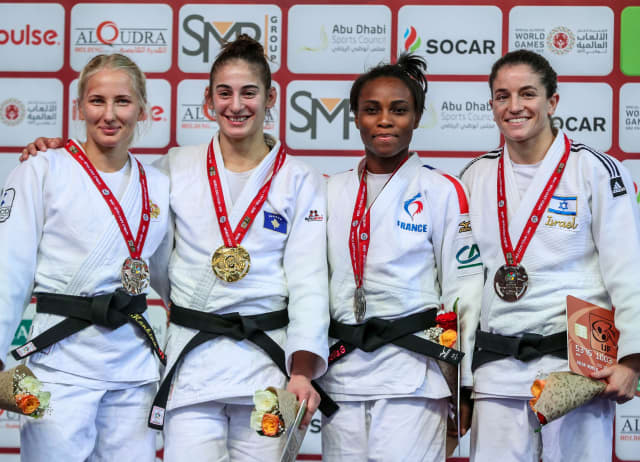 World Championships bronze medallist Amiran PAPINASHVILI (GEO) won his third Grand Slam title as he lit up the men’s lightest weight category. World Judo Masters silver medallist Francisco GARRIGOS (ESP), whose sole Grand Slam triumph come in Abu Dhabi in 2016, was thrown with a koshi-guruma for ippon after 20 seconds of golden score as PAPINASHVILI stole the show on day one. 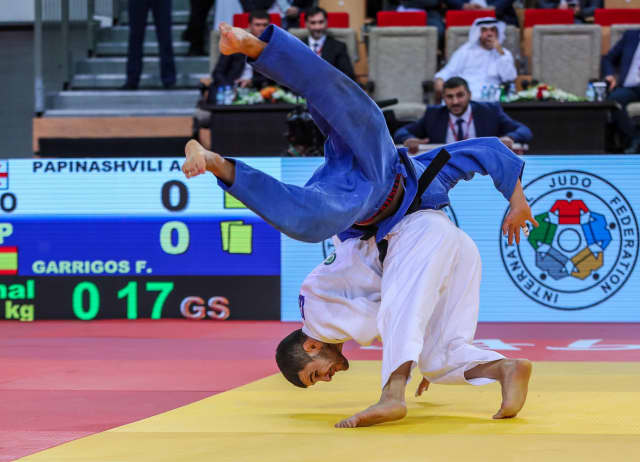 In the first semi-final Paris Grand Slam silver medallist Sharafuddin LUTFILLAEV (UZB) was turned over by PAPINASHVILI with beautiful te-waza for ippon as the Georgian marched on to the final. In the second semi-final GARRIGOS downed Agadir Grand Prix winner Gusman KYRGYZBAYEV (KAZ) after two and a half minutes of golden score by ippon from a gigantic hip throw.

The first bronze medal was won by KYRGYZBAYEV who rolled over former Cancun Grand Prix bronze medallist Jorre VERSTRAETEN (BEL) with a soft counter to a seoi-nage for a waza-ari score in golden score. The Kazakh opened his Grand Slam medal account after 25 seconds of added time to ensure this his country won exactly 25% of the -60kg medals available on day one.

The second bronze medal went to LUTFILLAEV who conquered former world champion Yeldos SMETOV (KAZ) in golden score. LUTFILLAEV won the contest after three and a half minutes of added time when SMETOV was penalised with a shido for a false attack. 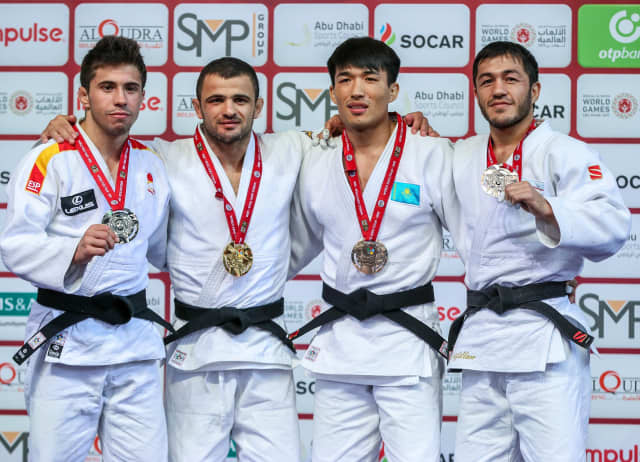 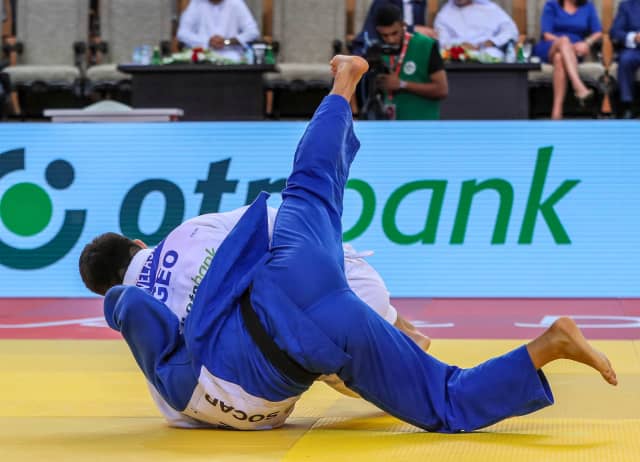 The first bronze medal was won by European Championships bronze medallist Dzmitry SHERSHAN (BLR) who dismissed GAITERO MARTIN by ippon. Belarus judoka SHERSHAN prevailed after a mammoth period of golden score which lasted for four minutes and 46 seconds until a clear winner was determined.

The second bronze medal went to World Judo Masters bronze medallist Baruch SHMAILOV (ISR) who defeated SHAMILOV with a modified kata-guruma in golden score. SHMAILOV was promptly congratulated after leaving the tatami by Minister of Sport and Culture of Israel, Ms. Miri REGEV who was invited to attend the competition by the IJF President Mr. Marius L. VIZER. 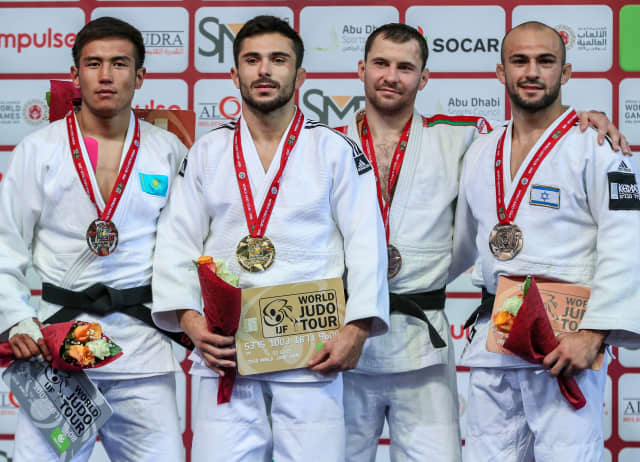