For Israel and judo, with high expectations: now the order is for more 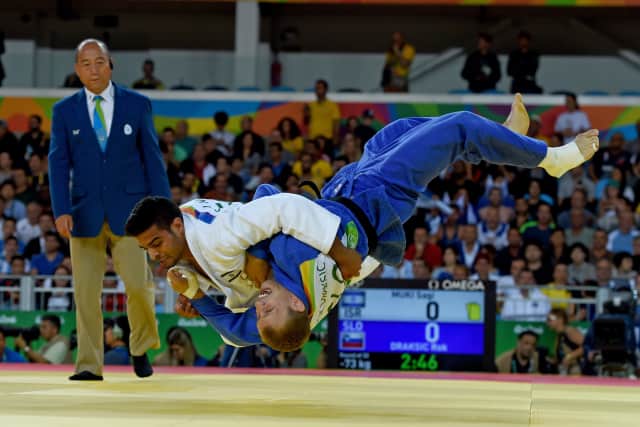 TEL AVIV — All of 63 seconds into the final round of the men’s under-81 category here at the Tel Aviv Grand Prix, the Israeli stud Sagi Muki caught Ivaylo Ivanov of Bulgaria entirely off guard. At 62 seconds, Ivanov was in the game. At 63, he was flying through the air and onto his back, wham, done, just that quick, victim of a textbook move that a judo purist would call sode-tsurikomi-goshi.

The rowdy, flag-waving, capacity crowd at Shlomo Group Arena had already been chanting, and loudly, in support of Muki, 2018 European gold-medalist last April here in Tel Aviv, winner in October 2017 at the Abu Dhabi Grand Slam: “Sa-gi! Mu-ki!” Now, as Ivanov unceremoniously hit the tatami, the place all but erupted, Muki first shaking his fists in triumph, then dropping back to his knees, then back up again to make a heart sign with his hands to share with the crowd.

A few minutes later, after even the placard girls joyfully joined in the singing of the national anthem in his honor, Muki said, “You know, the Israeli crowd is very special. United. Israelis are very united. They made a big noise. It’s very warm in Israel. I’m very happy I could do this for them — here, also for the European championships, also in Abu Dhabi. I wish I could do it every time.”

Expectations were not just met but surpassed, and now the bar is raised, the signals clear that when it comes to the mesh of Israel and judo the order is more — more individual medals for Israeli athletes at the Olympic Games in Tokyo in 2020, the possibility of including an Israeli squad in the inaugural judo team event at those Tokyo Olympics and, perhaps, even an International Judo Federation world championship back here in Tel Aviv. 2025, anyone?

Each of these possibilities, of course, carries significant challenges.

If the budgets can be realized, said Moshe Ponte, head of the Israeli judo federation, then that’s of course the starting place for a conversation to be had for a world championship in Tel Aviv.

Beyond, there are also considerable political issues to be considered. But as the IJF president, Marius Vizer, said in his welcoming remarks Thursday to the crowd, echoing Nelson Mandela, “Sport has the power to change the world. Of course the way forward [can be] difficult. But we have to go step by step.”

To be clear, there were athletes here from nations with predominantly Muslim populations. But this Grand Prix — announced amid last October’s 2018 Abu Dhabi Grand Prix, and put together in less than three months, and thus in itself an organizational and logistical triumph — marks another step, like last year’s European championships, on a road that must be traveled thoughtfully and with due process.

Behind the scenes, and this was hardly a secret, the president of the judo federation of a Muslim nation — a state with which Israel does not have formal diplomatic relations — was entirely welcomed, and warmly.

“Look,” Ponte said in an interview, “we organized the European championships, and now this Grand Prix, and everybody knows it’s very good organization, and the crowd is amazing. You don’t often see a crowd like this in the world. You can see it only in Paris and Tokyo, and maybe in Germany.

What’s really different in Israel is judo’s connection to and with a country that for a variety of reasons has wholeheartedly embraced the sport and the culture that comes with it.

If this sounds grandiose, it’s not.

Just before Muki and Ivanov took center stage, Belgium’s Sami Chouchi and Zagreb Grand Prix bronze medalist Anri Egutidze of Portugal were under the bright lights. It was Chouchi whom Muki had defeated here at last year’s European championships; after that fight, the two not only shook hands but embraced, two warriors sharing a mutual respect. The crowd knew, and appreciated, this. In the same way it would later cheer for Muki it now started chanting for Chouchi: “Sa-mi Chou-chi!”

This all goes back a generation, to the Barcelona Games in 1992. There Israel won its first two medals, in judo, from Yael Arad and Oren Smadja. Since, judo has all but been Israel’s Olympic national sport. Arad was among Friday’s medals presenters.

For a few hours on Friday — this was before Muki’s medal rocked the house — judo was the No. 1 trending topic on Israeli Twitter.

For emphasis: in a country of eight million people, judo was a bigger influencer on a key social media platform than any so-called hard news involving Iran, Syria or the United States.

“When all the people are united in Israel,” said Ponte, who is now in his early 60s and by now has seen a thing or two, it’s because “there’s a war.

“When someone brings pride to a crowd, and Israel and the country, it’s important to Israel. It’s emotional.”

The pair showed up at the arena after Israel had won three first-day Grand Prix medals; walking to their courtside seats, Ponte was stopped every few feet by someone asking to take a selfie or shouting, in Hebrew, “Congratulations!” At one break in the game, they delivered a bouquet of flowers to Vizer. Meanwhile, Ponte’s iPhone was blowing up; he estimated later that he had 200, maybe 300 messages from well-wishers.

As for the Tokyo team event: complications abound, including finding an Israeli woman who can compete at a heavier weight category.

When it comes to the possibility of individual medals, meanwhile, that’s in part why Ponte’s cellphone bill had best be on an all-in plan, because the hundreds of messages were just after Day One here, when the Israelis had won their first three medals.

In all, they would finish with seven overall, four gold, Or Sasson’s decision over Ukraine’s Yakiv Khammo Saturday evening at men’s plus-100 the punctuation point on the program. Both numbers topped the medals table.

For comparison: the United States sent a team of 15 athletes, and earned zero medals.

At this Grand Prix, Israel’s seven medals came despite the unexpected early-round losses of men’s under-66 top talents Tal Flicker and Baruch Shmailov and the no-go of under-100 star Peter Paltchik (ill, scratched); of course, significant numbers of athletes from Japan, South Korea and elsewhere weren’t here.

Back to the Olympics: the Israeli team won two medals at Rio in 2016, its first medals at the Games since Athens in 2004.

“FIrst of all,” Ponte said, “my goal is to bring medals at the Olympic Games. This is the only way. Now I know that I am in the way to do it.

“When you are going to the Olympic Games, you don’t just prepare two months or three months before the Games. You prepare for four years.

Always — always — you give yourself time to check yourself, check your team, check with your coaches to see where you are, to see what you had to do to peak at the Games.”

He also said, and just so this is crystal clear, because when there’s success, it often can be the case that there’s a tendency to lionize just one person but that is neither the judo way nor, Ponte emphasized, what he’s about:

“It’s not me, me, me. It’s the system.” That system, he said, is about “working without doubt,” adding, “It’s very positive. And the benefit is to everybody.”

See also
Sports Gala in Kosovo
Judo, the pride of a nation