Glory for Brazil as Japan endure frustrating start in Baku

By Mark Pickering on 10. May 2019
Share
Use #JudoBaku to join in with the social media discussion 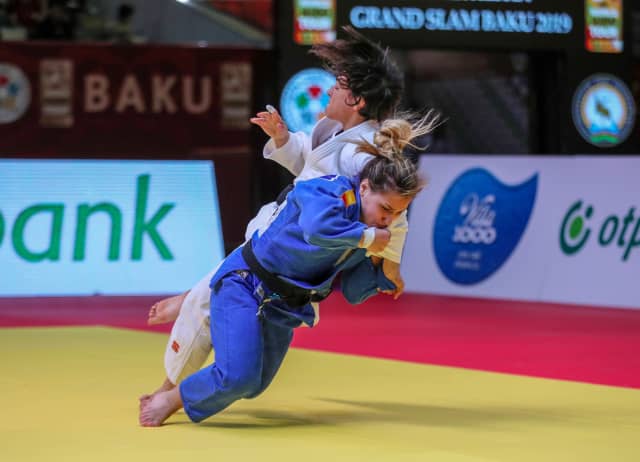 In the first semi-final world number 31 Maria SIDEROT (POR) lost out to FIGUEROA by ippon having trailed to a waza-ari score. In the second semi-final Düsseldorf Grand Slam bronze medallist Catarina COSTA (POR) fell to MARTINEZ ABELENDA by ippon from a ko-uchi-gake. 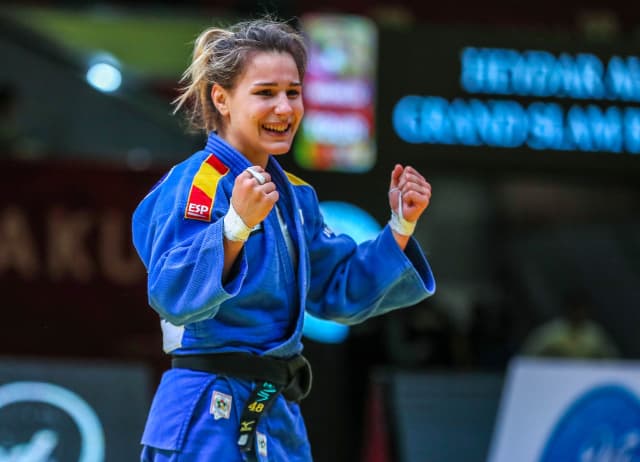 The first bronze medal contest was won by COSTA who marginally beat two-time Grand Prix winner Gabriela CHIBANA (BRA). COSTA struck first with a waza-ari score before CHIBANA levelled the scores and Portuguese scored again after 31 seconds of added time to win the opening contest in the final block.

The second bronze medal was won by eight-time Grand Prix medallist Milica NIKOLIC (SRB) after SIDEROT was disqualified for picking up her third shido for passivity. 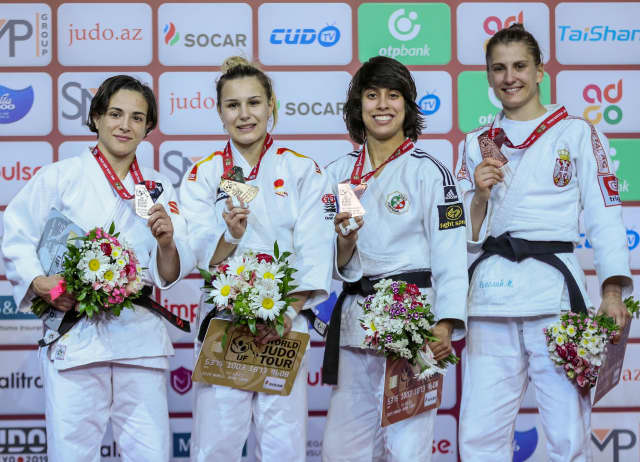 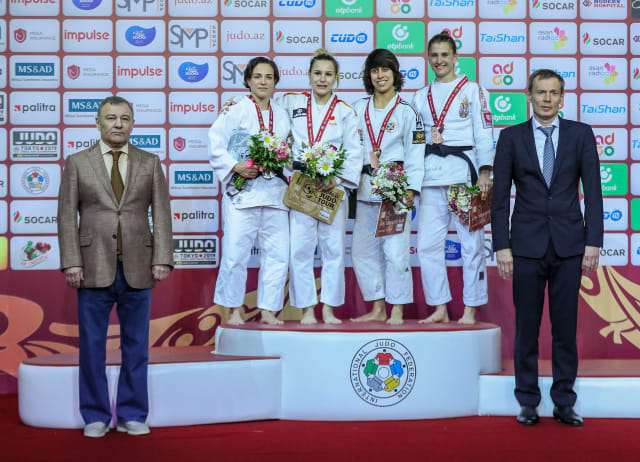 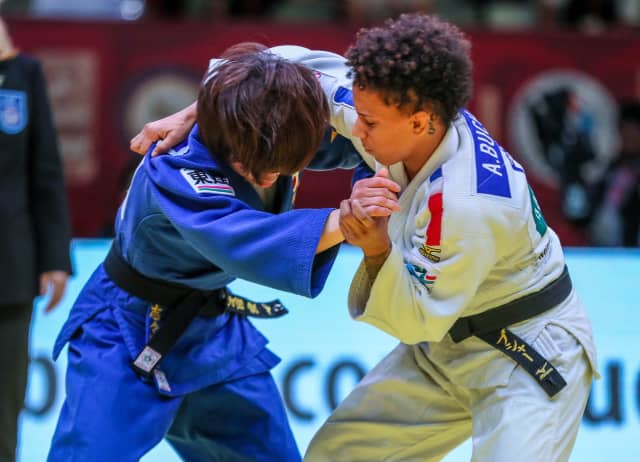 The first bronze medal was awarded to PRIMO who was a class above Tashkent Grand Prix silver medallist Evelyne TSCHOPP (SUI) who lost out by a waza-ari score.

The second bronze medal was won by Antalya Grand Prix bronze medallist Larissa PIMENTA (BRA) who further established herself as Brazil’s number one at -52kg by besting colleague VALENTIM by a waza-ari score from a sode-tsurikomi-goshi. 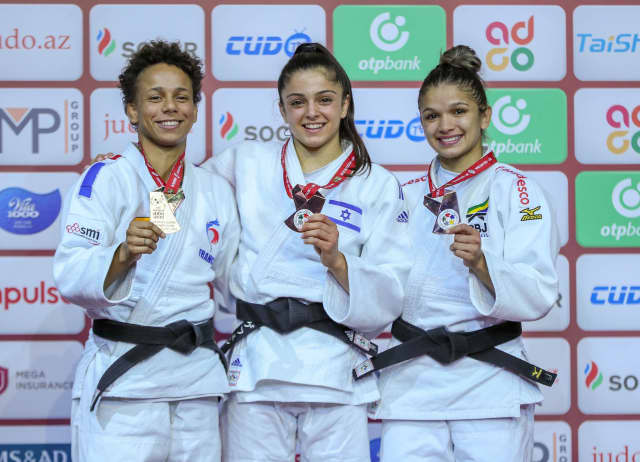 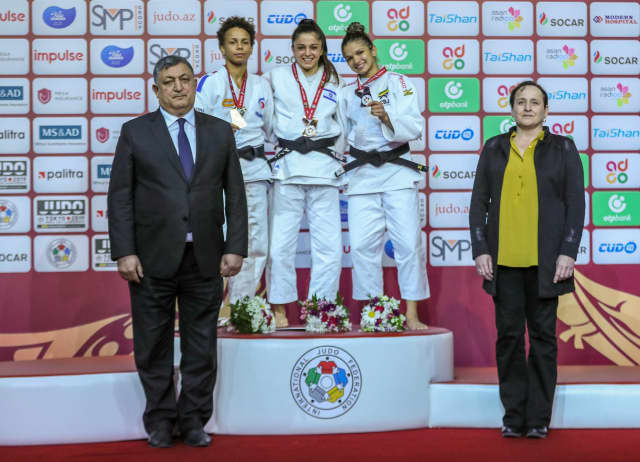 Olympic champion Rafaela SILVA (BRA) ruled in the -57kg category as the 2013 world champion defeated reigning world champion YOSHIDA Tsukasa (JPN) for the first time. YOSHIDA, who led their head-to-head series 3-0 before today, was the favourite to win in Baku but SILVA pounced with 15 seconds left for a waza-ari score to claim her 12th Grand Slam medal but first of the golden variety. 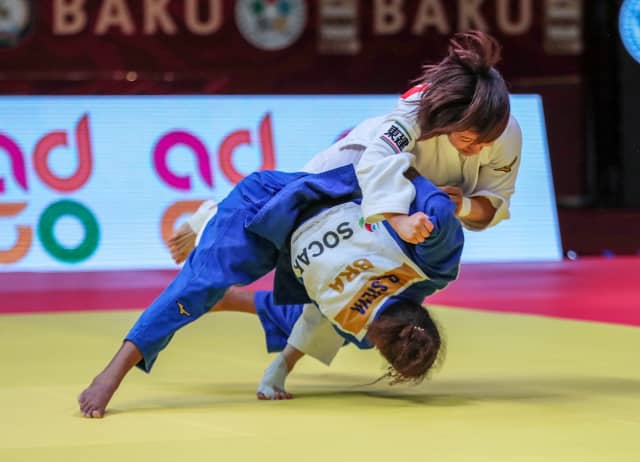 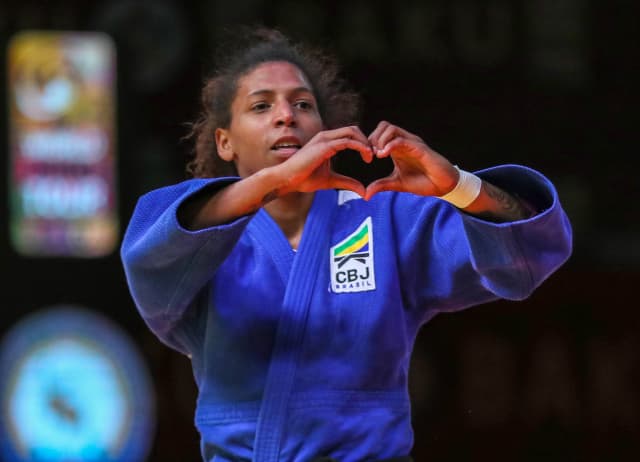 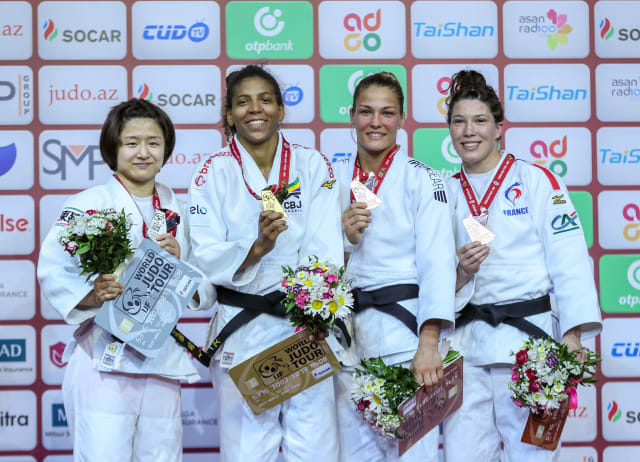 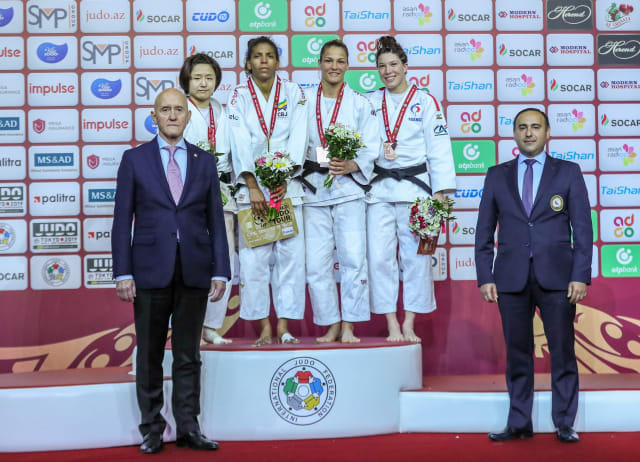 London 2012 Olympic bronze medallist Felipe KITADAI (BRA) achieved a career first as the veteran Brazilian ended an IJF competition day with gold for his country. After earning three Grand Slam silver medals, KITADAI, who was ranked a lowly number 33 at the start of the day, brushed aside Paris Grand Slam bronze medallist Temur NOZADZE (GEO) by two scores for gold. First-time finalist NOZADZE was stunned by the Brazilian who has given himself a fantastic chance to go on and qualify for Tokyo 2020. 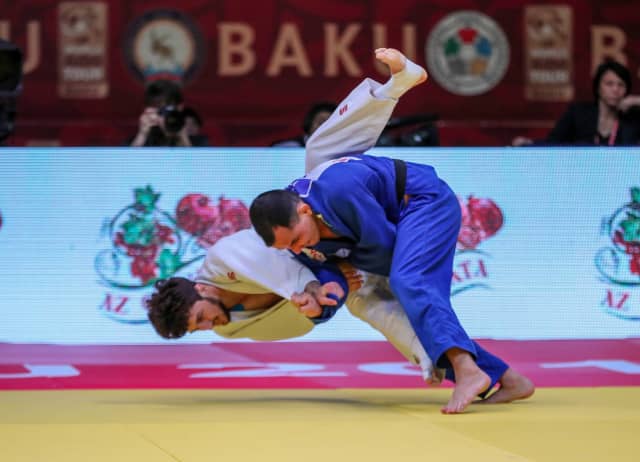 In the first semi-final former world silver medallist DASHDAVAA Amartuvshin (MGL) was launched by NOZADZE (GEO) with a hip throw for ippon. In the second semi-final Abu Dhabi Grand Slam silver medallist Francisco GARRIGOS (ESP) was shocked by KITADAI who rolled back the years to win by ippon. 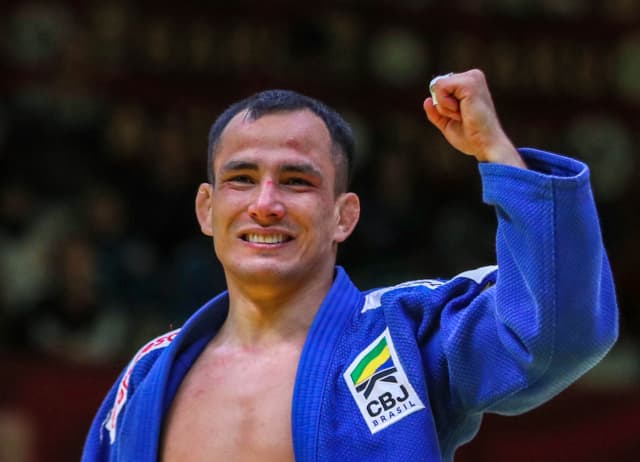 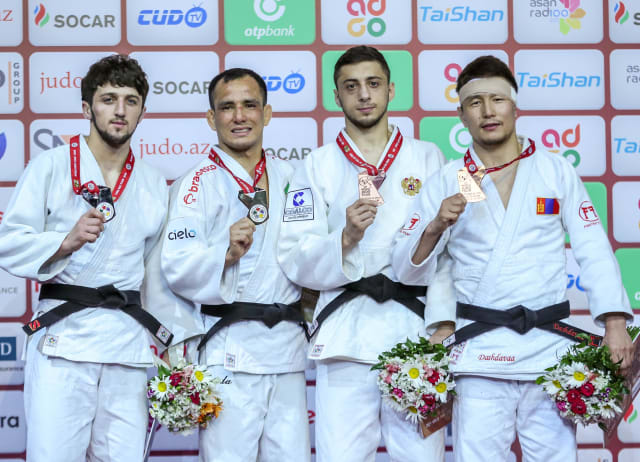 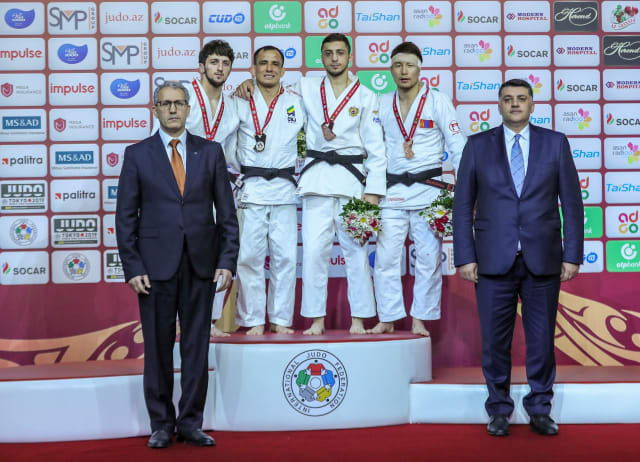 Paris Grand Slam winner Denis VIERU (MDA) won his second Grand Slam title of the season as he defeated Tashkent Grand Prix bronze medallist Nijat SHIKHALIZADA (AZE). VIERU, 23, planted the veteran Azeri, 31, for ippon to propel himself even higher on the World Ranking List next week. SHIKHALIZADA had to settle for silver while Moldova’s golden man won his third IJF event of the season from four outings. 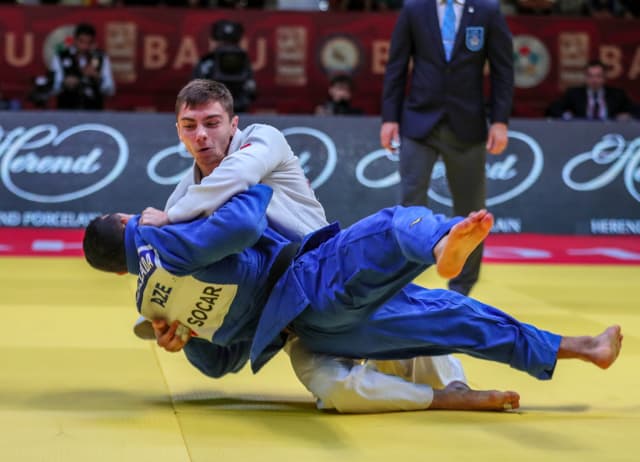 In the first semi-final 2017 Baku Grand Slam silver medallist Mukhriddin TILOVOV (UZB) was dismissed after picking up his third shido for passivity against VIERU. In the second semi-final SHIKHALIZADA saw off Düsseldorf Grand Slam bronze medallist YONDONPERENLEI Baskhuu (MGL) by a waza-ari score to guarantee the hosts’ first medal in Baku. 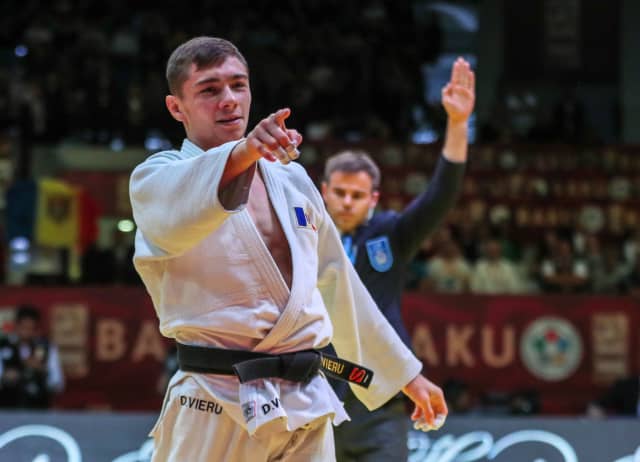 The first bronze medal was won by YONDONPERENLEI who countered Warsaw European Open silver medallist Ibrahim ALIYEV (AZE) who was off balance to win by ippon with 24 seconds left on the clock. The second bronze medal went to Tel Aviv Grand Prix silver medallist Bogdan IADOV (UKR) who floored TILOVOV with an o-soto-gari for a waza-ari score at the halfway point and held firm for a place on the podium. 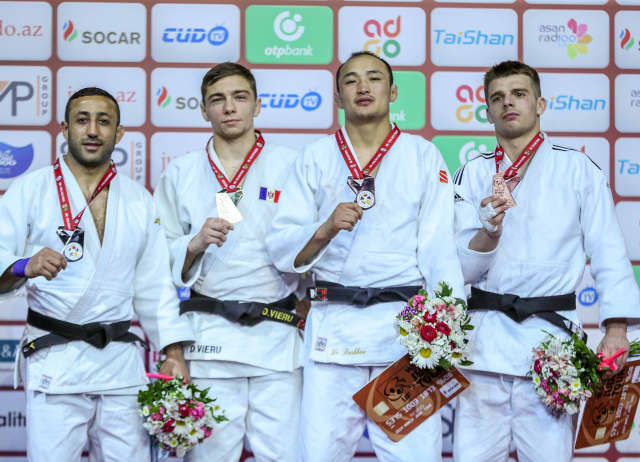 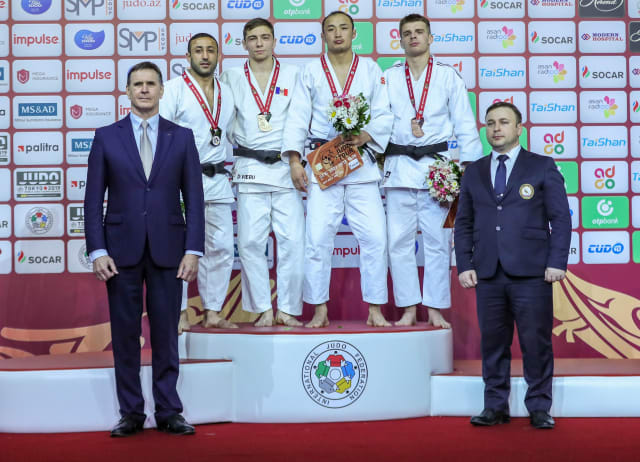