It Was a Year Ago But it’s All About Today

Written by Jo Crowley on 13. Sep 2020
Photographs by Gabriela Sabau, Emanuele Di Feliciantonio
Share
It’s a year since Great Britain’s Sally Conway won a medal at the world championships in Tokyo and what a place to do it! The Nippon Budokan is such a special venue, having hosted the Olympic Judo event when Tokyo delivered the 1964 Games and it will be again in 2021 at the Olympic EGM!

Sally is a 33 year old Olympic and European medalist and is highly regarded as one of the nicest humans in world judo. Sally’s road to this medal has been one of perseverance and sheer hard work, coming in her 8th appearance at a world championships, debuting on a world championship rostrum ten years after losing the bronze medal contest in Rotterdam.

Sally losing the bronze medal to Watanabe (JPN) in Rotterdam, 2009

“Winning the world medal felt like the proof that never giving up means something. I’ve fought in so many competitions and so many world and European championships. My own statistics drive me to believe in my capability. I medalled at my 8th Paris Tournament, my 8th European Championships and now I’ve taken a medal at my 8th world championships. Having the hat-trick of world, European and Olympic medals is very special too and all of them have come in my 30th year and older.

I’m 33, not the average age of the world’s elite judoka, but I know I can still do it. Continuing to take big wins and secure medals at the highest level shows me I’m training in the right way. I have confidence in my experience and my work ethic and also in my team. My club, the Edinburgh Club, couldn’t be more supportive.”

What do you remember about the day itself, in Tokyo?

“Fights were so tough. It was a slog, but I felt all the drilling I had done made it second nature to cope with whatever came at me. I was able to adapt, I really knew what I had to do in each fight. I could also hear my coach, Billy Cusack, in the crowd and he always keeps me focussed. In golden score, hearing my team-mates and coach made a huge difference and the arena style of the Nippon Budokan meant I could hear them no matter how far away they were. It’s a fantastic venue and I’m excited about the prospect of competing here again next year." 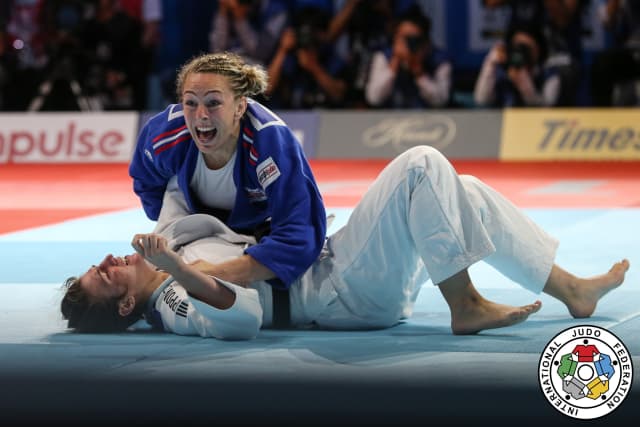 Sally beating Polleres (AUT) for the bronze in Tokyo, 2019; a world medalist, at last

"The bronze medal contest with Polleres (AUT) was never going to be easy. I remember standing in the holding area just before, feeling so nervous. I remember thinking about what an opportunity it was and how that world medal was right there in front of me, so I re-focussed, not on the medal, but what I had to do in the fight. Lots of self-talk, knowing if I get the majority of the decisions right I can win.

I remember the atmosphere. It was incredible. To have a medal-winning experience there ahead of the Games was too good a chance to miss. I actually felt lucky!

Once it was over I almost couldn’t believe it. I had done it! I’d won a world medal! My mind was flooded with so many thoughts but I was numb at the same time. You asked me what were the first words between me and Billy afterwards but there weren’t any. We didn’t need any.” 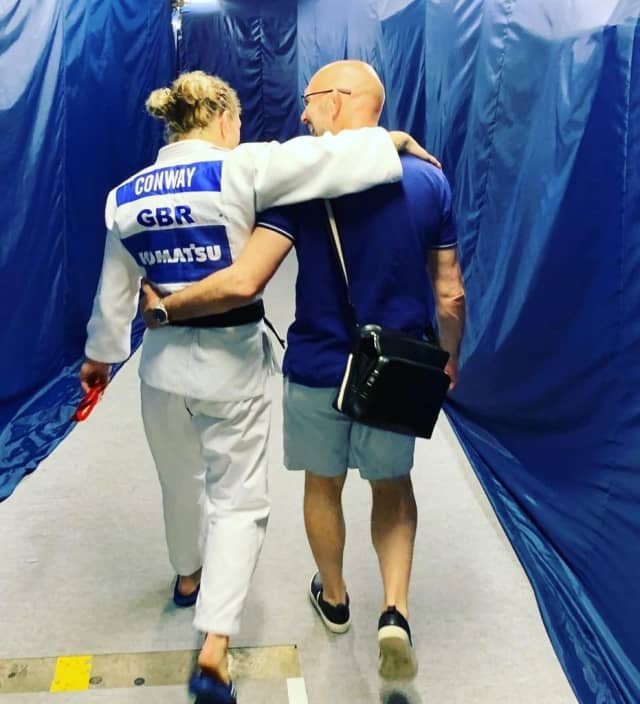 How have your many years at the very top contributed to your approach on fight day?

“Now I really have the confidence to listen to my body. I remember when I won Paris in 2018, I really knew what I needed. As a younger athlete I would just follow whatever a coach told me but now I play a much bigger role in that process, voicing my needs, taking rest when I need it. I know that all the experiences leading up to that Paris final gave me a strength and ownership that I just didn’t have as a younger judoka. I felt in control of me and my training and my choices and that had a huge impact on my performance.”

What has the break from normality, the ‘Coronacoaster,' meant for you?

I’m nervous about the prospect of having to get back to competition fitness. I’ve trained hard throughout but nothing can replace randori and competition. It’s been 6 months without those and I miss them. To get better at judo you have to do judo, no way around that, no matter how fit I am, so it’s going to be brutal. I’m ready, though! I can handle what’s needed.

Aside from training, there have been some bad days, of course. I think all high level athletes have had some moments to challenge them. I remember flipping the calendar over to 1st July. I’d written on it months before, ‘weigh-in day,’ ‘Olympics’ and on the next page it said ‘holiday.’ Right then I had overwhelming thoughts that I shouldn’t be sat in my living room, on my rowing machine. I flipped the page back down again and left it on June.

Training has pulled me though. I’ve also discovered walking. I love, love, love walking, taking in views of the city I haven’t previously had time to absorb. Whenever I get fed up now, a good, long walk sorts me out. I will keep them in my weekly schedule from now on, making time for fresh air and nature. I will continue to see Edinburgh on foot and not by car." 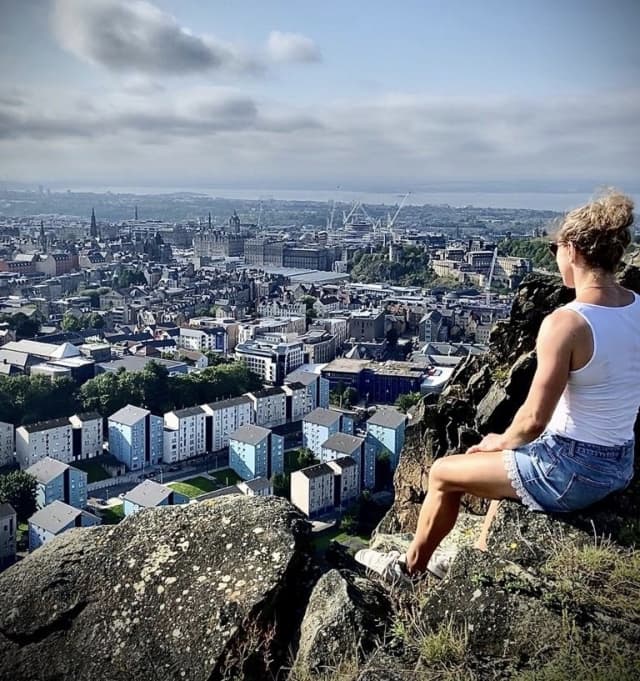 "Restrictions have lifted in Scotland in some ways now. Still no judo but I’ve been able to see friends again and that’s been a relief. I’ve missed them. It’s been strange though, at first kind of forgetting how to communicate face-to-face. How to manage physical contact, shaking hands or kissing cheeks, we’ve all become so used to Zoom. It didn’t take long for us to relax though.” 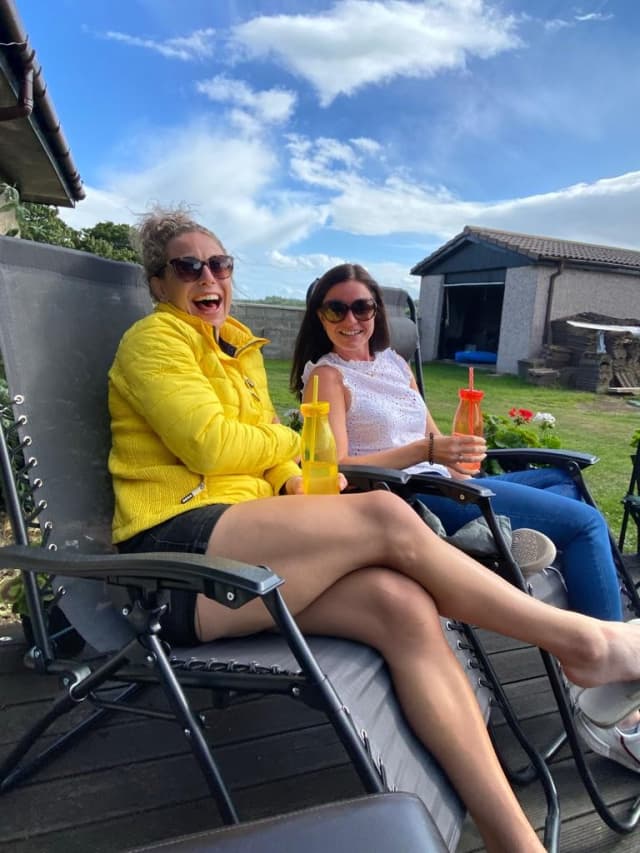 Do the judo values play a part in your daily life?

“I think this whole period has been hard for everyone and although we might not all have exactly the same circumstances, we have definitely all had to deal with adversity and reflection.

Honesty has played a big part in managing this time for me. It’s been acceptable to feel how we feel. We haven’t been expected to be super-positive. We can say how we feel and we can include other people in the discussion. We are sharing this and when we talk that shared experience somehow helps us to deal with it. Being honest and adaptable and real!

In some ways Covid has taken the pressure off. We were all on the Olympic train just aiming at points and qualification. I’ve been able to really focus on me instead and that’s been a bit of a revelation.”

We spoke about hopes for the future and recalled some great moments from our judo past, but one thing Sally was really sincere about was the impact this period could be having on younger players. It can be hard to gauge what the future can look like, when you’re really young and have yet to build the experience-base and the tool kit to feed your athlete mindset.

“I’d say to the Cadets, just coming into international sport, to tackle this unprecedented time head-on. Write a list of the things you can control, things to help you stay healthy. We are all in this judo situation and we will all have to play catch-up, so don’t feel alone in this. You have years ahead of you so keep doing what makes you happy, while keeping tabs on your fitness and health.”

That’s sound advice from a current world and Olympic medalist, from an elite judoka, from someone who knows what perseverance tastes like.

This past year has been one none of us will forget, despite many of us thinking we’d like to. With different, personal freedoms being uncovered and with the judo values always underpinning what we do, we can find a route through to Tokyo2020 and to a life beyond Covid. Sally Conway will be walking into her next Olympic Games with confidence and honesty by her side.