By Mark Pickering, Gabriela Sabau, Fawaz Alenezi on 28. Oct 2018
Share
Judo sends a message of peace to the world during the Abu Dhabi Grand Slam on #WorldJudoDay with new Judo Grand Prix signed for Tel Aviv

The history-making Abu Dhabi Grand Slam produced an emotionally charged day both on and off the tatami as Israel - who were competing under their own flag for the first time in a gulf country - and France, Georgia and the Netherlands struck gold in Abu Dhabi on #WorldJudoDay.

A year ago the Israeli team took part in the Abu Dhabi Grand Slam under the banner of the IJF and the IJF anthem was played when Tal FLICKER won -66kg gold. On the final day of the competition in 2017, the heads of the Israel Judo Association, International Judo Federation and the U.A.E Judo & Wrestling Federation shook hands and declared a commitment to meeting again in Abu Dhabi in 2018 under equal conditions.

The IJF initially suspended this year’s Grand Slam until the U.A.E Judo & Wrestling Federation committed in writing to providing equal participation rights to all countries and to meet the moral principles and values of Judo, Olympism and sport in general, thus making an active contribution to the promotion of peace and equality between nations, races and genders. 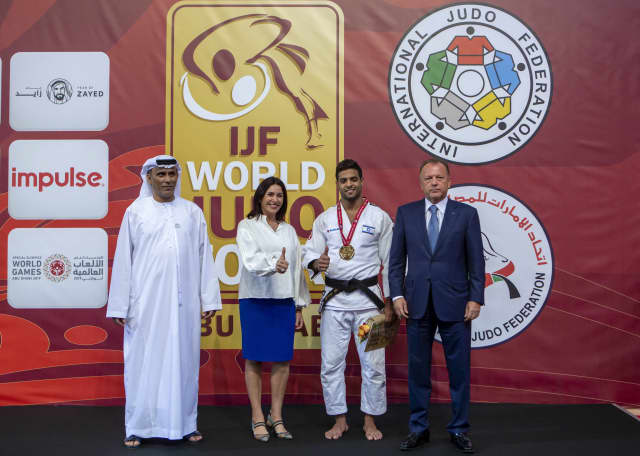 Israel’s European champion Sagi MUKI won the -81kg title on a day which also saw his country sign a landmark agreement to stage an IJF World Judo Tour event for the first time. MUKI was swiftly congratulated after leaving the tatami by Israel's Sports and Culture Minister Ms. Miri REGEV who has been in attendance on Saturday and Sunday after being invited by IJF President Mr. Marius L. VIZER. 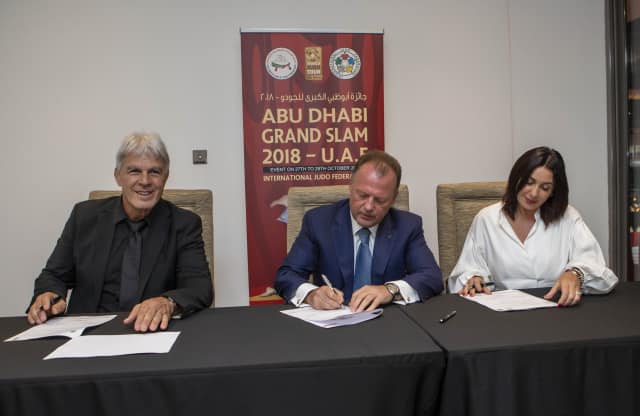 Mr. VIZER said: “I wish to congratulate Israel for their success here today and to congratulate them for their new Grand Prix event. I would like to thank the President of U.A.E Judo & Wrestling Federation, H.E. Mohamed Bin Tha'loob Al DERAI, the General Secretary of the U.A.E Judo & Wrestling Federation, our colleague Mr. Naser AL-TAMIMI, our hosts Abu Dhabi and the U.A.E and everyone involved in contributing to this historic day.

“We are able to send to the world a message of solidary, friendship and peace and I thank everyone involved in this achievement. We showed a nice example to the youth of the world in a moment that was not just more than a sport but more than judo and was a crucial moment in the world. I hope the unity between the two cultures, Muslim and Israeli culture is a start for a new era in the sport and later in the world, social, political, economical areas. Thank you very much to all of you.” 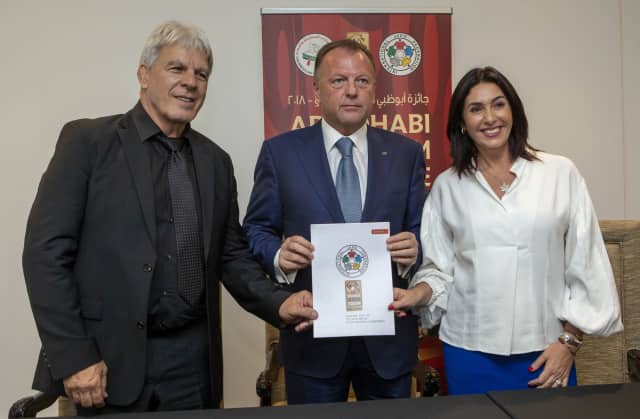 Ms. REGEV said: “Today has made double history for us as we have won gold here in Abu Dhabi and our anthem has played and we have signed a contract to stage our first ever IJF Grand Prix in Israel. Everyone is invited to our Grand Prix including all Arabic countries and I hope you will all see that our country is a peaceful and loving nation with good food and good people.”

“I would like to thank the President of U.A.E Judo & Wrestling Federation, H.E. Mohamed Bin Tha'loob Al DERAI, Mr. Naser AL-TAMIMI and IJF President Mr. Marius L. VIZER on behalf of our government, our people and especially our athletes.

Mr. PONTE said: “I would like to thank the President of U.A.E Judo & Wrestling Federation, H.E. Mohamed Bin Tha'loob Al DERAI, Mr. Naser AL-TAMIMI and IJF President Mr. VIZER and our hosts here in the U.A.E for helping us to be here with our flag and to have our anthem played, I really thank you all very much.”

President of U.A.E Judo & Wrestling Federation, H.E. Mohamed Bin Tha'loob Al DERAI was recognised for his services to the development of judo, friendship and peace with a special diploma from IJF President Mr. Marius L. VIZER. 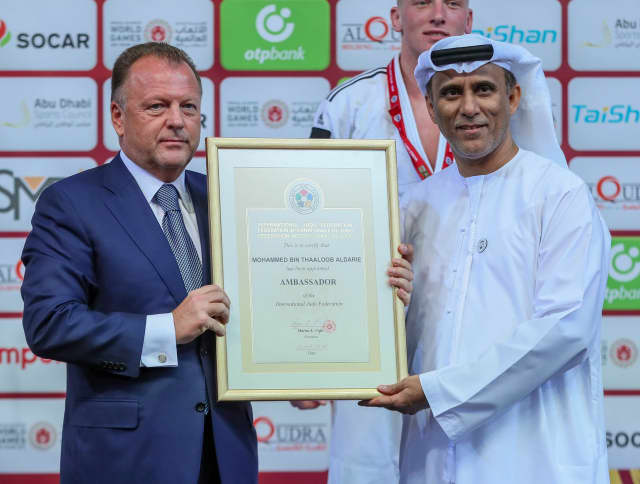 Three-time world champion and Athens 2004 Olympic champion Ilias ILIADIS (GRE) was among the illustrious guests in attendance on day two of the Abu Dhabi Grand Slam. The Greek great, who won Olympic gold at the age of 17, led a special #WorldJudoDay masterclass during the break on day two as local children and senior members of the U.A.E national team alike were put through their paces by the 31-year-old legend who officially retired last year. 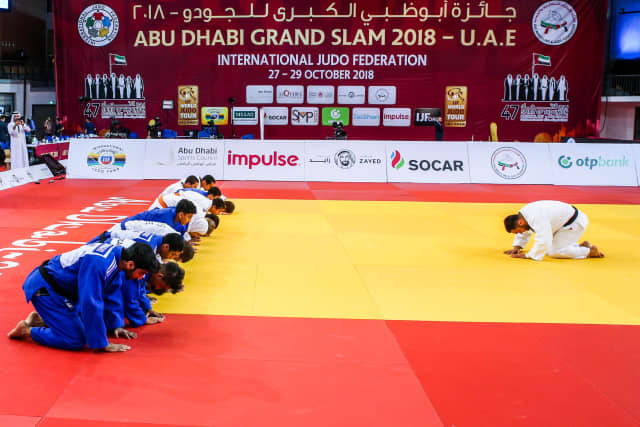 ILIADIS led a warm up as the world watched live on the IJF Facebook page and the children’s smiles were beamed around the world in a fun and friendly atmosphere that beautifully illustrated this year’s theme of Friendship. The Beijing 2008 Olympic flagbearer squared off against each participant of the masterclass in randori as the younger members politely requested a second contest against their world-renowned coach for the day who duly obliged. 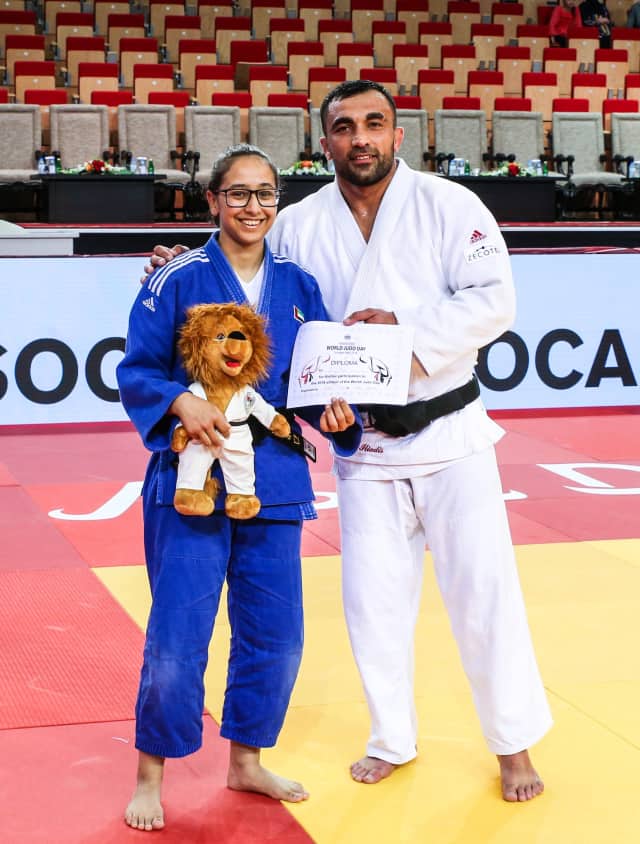 ILIADIS credits judo with shaping his life and making him the man he is today: a champion, a father, a husband, and an inspiration to the world. 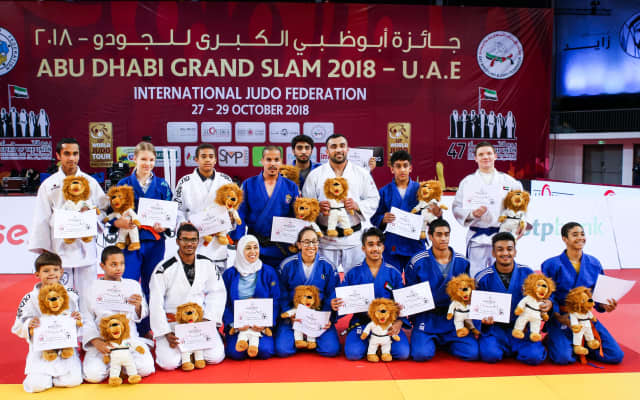 World Championships bronze medallist Juul FRANSSEN (NED) won her second Grand Slam gold medal with a victory over Agadir Grand Prix winner Andreja LESKI (SLO) in the -63kg final. FRANSSEN extended her head-to-head record over the Slovenian to 2-0 with a measured performance as she countered a tired tai-otoshi attempt from Tokyo 2020 candidate LESKI to roll over her adversary after four minutes of golden score for a match-winning waza-ari. 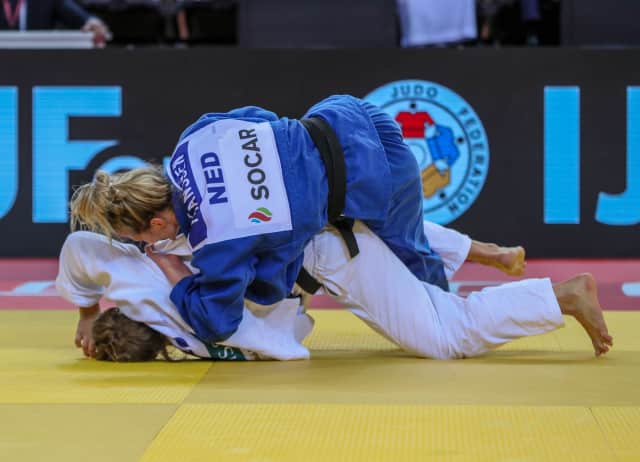 In the second semi-final World Championships bronze medallist Juul FRANSSEN (NED) beat world number six TRAJDOS in a one-sided contest. The first bronze medal contest was won by Olympic champion Tina TRSTENJAK (SLO) after TRAJDOS was disqualified for endangering her opponent with a waki-gatame after only 20 seconds.

The second bronze medal was won by Agadir Grand Prix silver medallist Katharina HAECKER (AUS) who made her Grand Slam breakthrough at the expense of OZDOBA-BLACH. The Australian threw her Polish opponent for ippon with a koshi-guruma after 62 seconds of golden score. 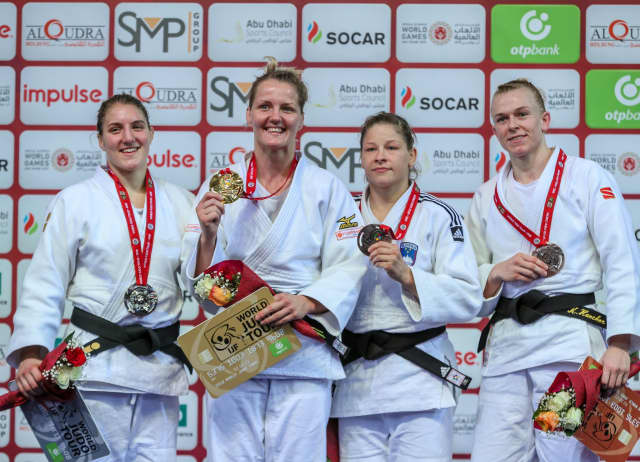 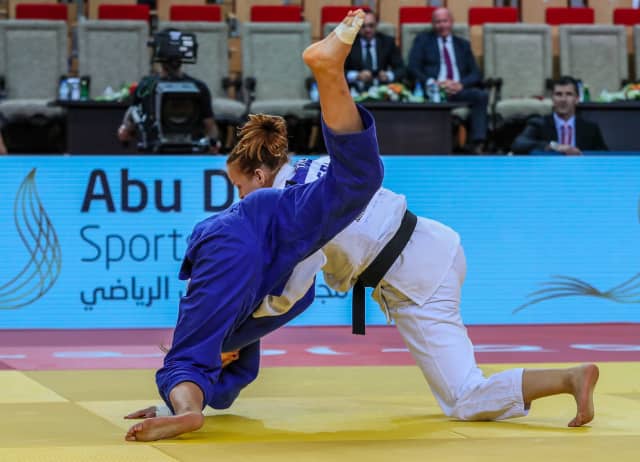 In the first semi-final two-time world medallist Maria BERNABEU (ESP) lost out to PINOT Margaux (FRA) by ippon. In the second semi-final BUTKEREIT held down Olympic bronze medallist Sally CONWAY (GBR) for ippon with a tate-shiho-gatame.

The first bronze medal was awarded to former Junior World Championships winner Giovanna SCOCCIMARRO (GER) who ended a miserable day for CONWAY. SCOCCIMARRO defeated Great Britain’s five-time Grand Slam medallist by ippon after countering a sasae attempt with te-waza with two seconds left on the clock. The second bronze medal was won by Cancun Grand Prix gold medallist Michaela POLLERES (AUT) who submitted BERNABEU with a kosh-jime strangle for ippon with 88 seconds left on the clock. 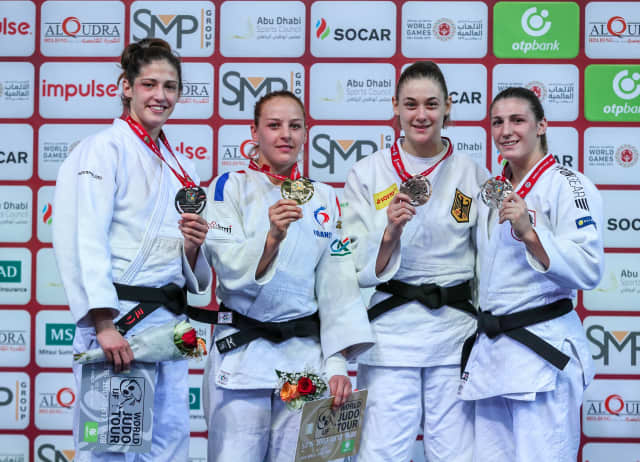 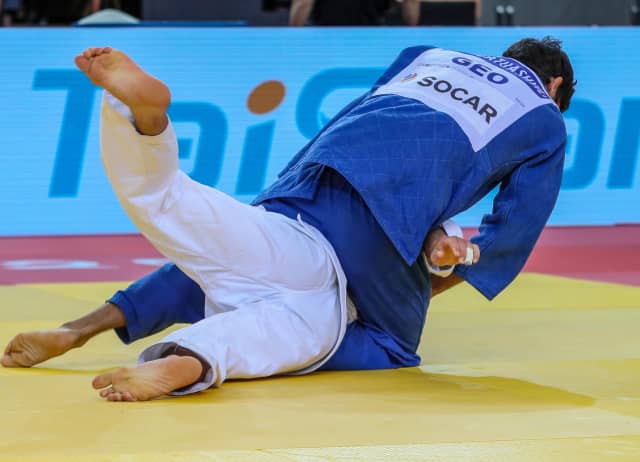 In the first semi-final Agadir Grand Prix silver medallist Musa MOGUSHKOV (RUS) was edged out by GJAKOVA by a waza-ari score in golden contest which was the only score in the bout. In the second semi-final Cancun Grand Prix gold medallist Tommy MACIAS (SWE) lost out to SHAVDATUASHVILI by ippon.

The first bronze medal was won by MACIAS who defeated defending Abu Dhabi Grand Slam winner GANBAATAR Odbayar (MGL) by the margin of two scores. Swedish star MACIAS outgripped and outfought the rugged Mongolian as he registered two waza-ari scores to seal a place on the podium. The Mongolian has now finished fifth at his last six competitions. The second bronze medal went to MOGUSHKOV who beat Prague European Open silver medallist Artem KHOMULA (UKR) after 42 seconds by ippon. Russia’s MOGUSHKOV caught his Ukranian opponent with a ko-uchi-gari to win his 13th Grand Slam medal in a spectacular finish. 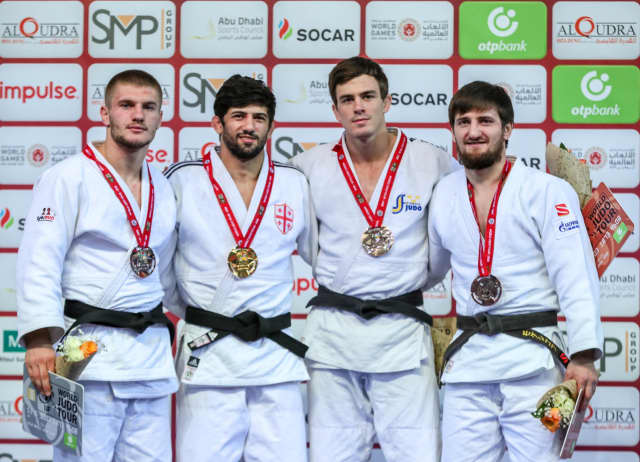 European champion Sagi MUKI (ISR) won Grand Slam gold for the second time and soaked up every second of joy and emotion following the -81kg final against Zagreb Grand Prix silver medallist Matthias CASSE (BEL). MUKI, who previously registered Grand Slam in Baku in 2014, won their first meeting on his way to the European crown at home in April and was again superior to the former Junior World Championships winner. CASSE secured his first Grand Slam honour despite the defeat which came after nine seconds of added time from a waza-ari score. 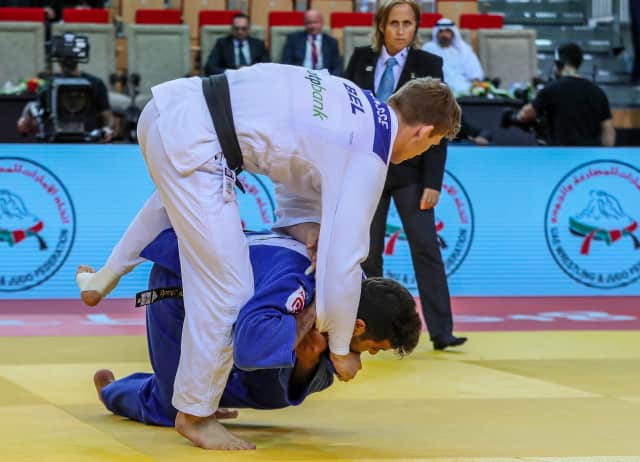 In the first semi-final CASSE defeated world champion Saeid MOLLAEI (IRI) who had to withdraw to due sustaining a twisted ankle in his previous contest. In the second semi-final Cancun Grand Prix bronze medallist Frank DE WIT (NED) was undone by MUKI from a gargantuan makikomi effort for ippon.

The first bronze medal was won by DE WIT who saw off Minsk European Open silver medallist Etienne BRIAND (CAN) by a single waza-ari score. The second bronze medal went to Asian Games winner Didar KHAMZA (KAZ) as the injured MOLLAEI could not compete and had to settle for fifth-place. 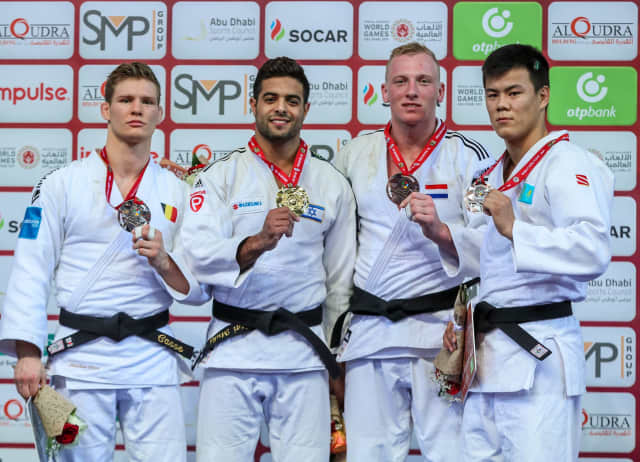