By Nicolas Messner on 06. Jul 2019
Share
Exciting first day of Judo at the inaugural Montreal Grand Prix. 2 gold for Japan, 1 gold for Canada, Isreal and Mongolia 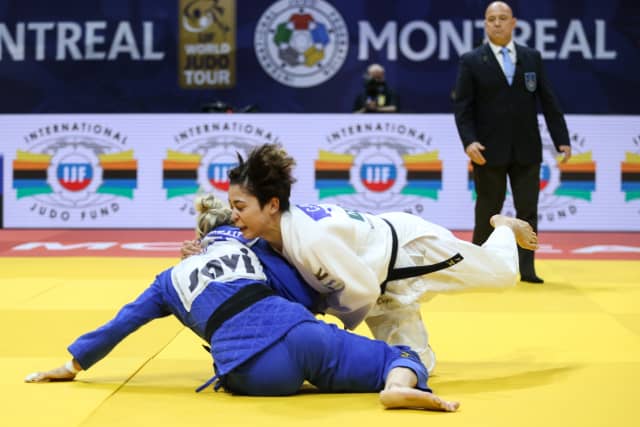 Aged just 18, KOGA Wakana (JPN) was not a favorite at the start of the day. It must be said that she had a glorious opponent in the semi-final as she was opposed to Paula Pareto (ARG), who came to Montreal only for gold. But the young Japanese, whose only glories to date were two gold medals won in continental cups (cadets and juniors), was not afraid and won against the Olympic champion in the golden score to reach the last match of the day. In the final Koga was opposed to the bronze medalist of the last Baku Grand Slam, the Portuguese Catarina COSTA. 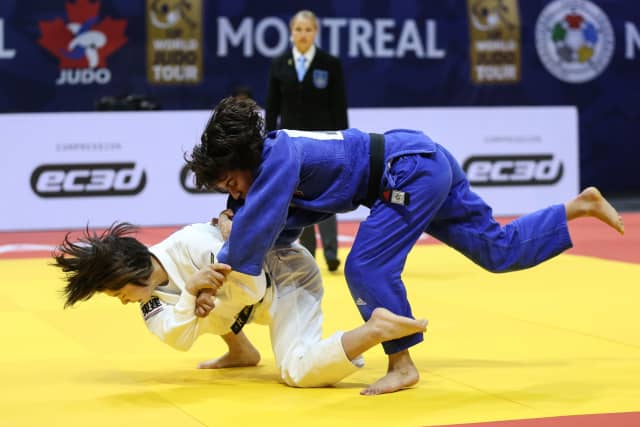 The first half of the final seemed to be well balanced, none of the athletes being able to take the lead and perfectly neutralizing each other with their end-of-sleeve gripping. If a first waza-ari was attributed to the Japanese after she executed a low o-uchi-gari, the video refereeing canceled the score and Koga and Costa entered the golden score. Is is only after almost four minutes of golden score that Costa was penalized with a first shido for passivity and after 4 minutes and 16 seconds that Koga eventually score a waza-ari with a reverse seoi-nage.

The first bronze medal contest opposed the second Argentinian athlete of the category, Keisy PERAFAN (ARG) and the winner of the 2019 Tel Aviv Grand Prix, Shira RISHONY (ISR). After thirty seconds, RISHONY was the first in action as she scored a waza-ari with a low shoulder movement. PERAFAN had several occasions to conclude on the floor with some strong armlock attempts, but it is the Israeli who scored a second waza-ari to put an end to the bout and win her ninth medal in a Grand Prix.

The second bronze medal contest opposed the 2018 Antalya Grand Prix bronze medallist, Gulkader SENTURK (TUR) and Paula PARETO (ARG). The danger first came from the Turkish side as SENTURK used her longer arms and legs to try a Yoko-tomoe-nage for no-score. Half way to the end, PARETO was penalized with a first shido for passivity. The Turkish seemed to dominate the contest, but as great champion as she is, PARETO scored a precious waza-ari with a shoulder movement, only a fews seconds before the end. 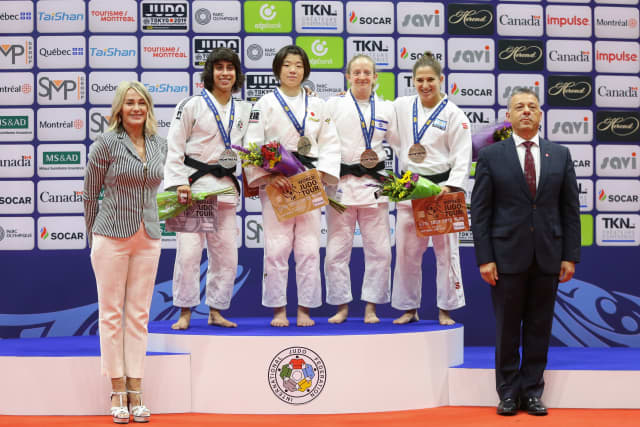 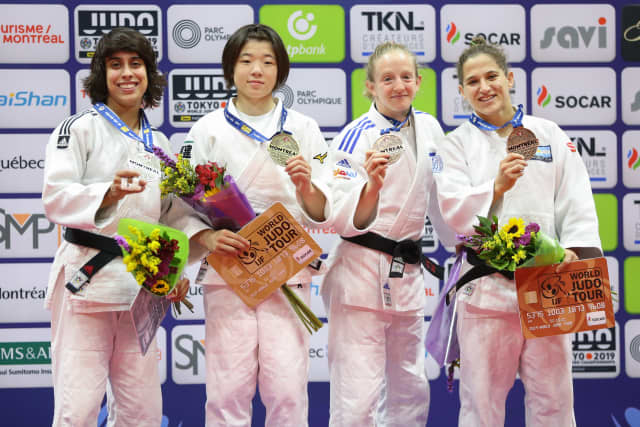 With three bronze medals won this season at the Grand Prix of Hohhot and Marrakech and at the Bakou Grand Slam, Gefen PRIMO (ISR) was the favorite of the day in women's -52kg. She entered the final after her victories against JEONG Bokyeong (KOR) in the semifinal but more significantly against London Olympic Champion, Sarah MENEZES (BRA), in her preliminary round. In the final she was opposed to the 2019 Pan-American silver medallist Angelica DELGADO (USA). 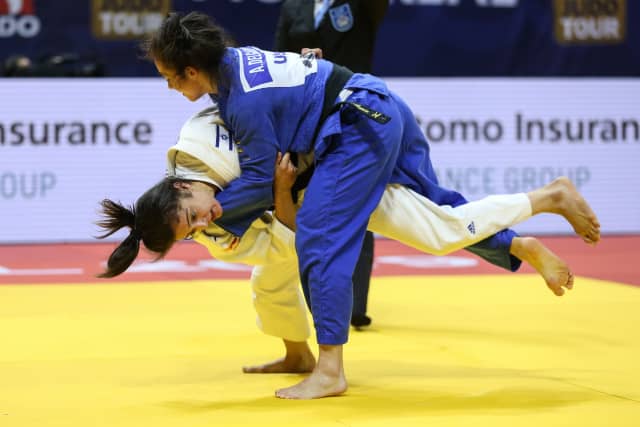 After the first minute only one shido was written on the scoreboard as PRIMO was penalized for grabbing the fingers of her opponent. As both athletes were entering the last minute, the Israeli was penalized with a second shido for passivity, DELGADO clearly being more active. After four minutes, there were still no score to designate the winner. Even if she seemed to be a step ahead, DELGADO succumbed to the last tani-otoshi executed by PRIMO for waza-ari. 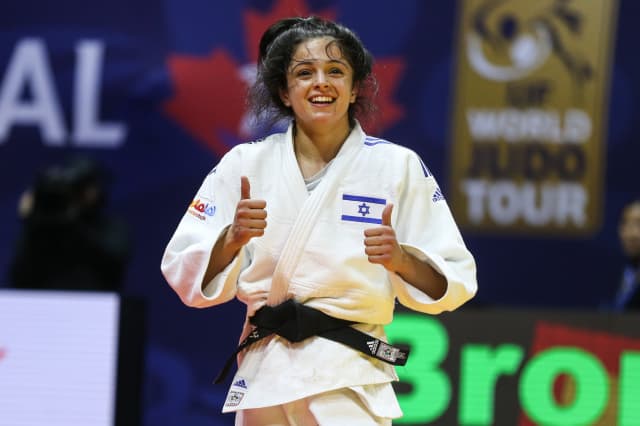 The first bronze medal contest saw 2012 Olympic Champion Sarah MENEZES (BRA) and the 2017 Junior European Champion Irem KORKMAZ (TUR) compete for a place on the podium. After 30 seconds, KORKMAZ received a first penalty for blocking her opponent. All day long, the former Olympic Champion seemed to be far away from her best years, but with a superb left handed combination ipon/ko-uchi-gari for waza-ari, she showed that she was still among the top athletes on the circuit. But with a few dozens seconds left and a second shido on the scoreboard, MENEZES, suddenly was entering into the red zone. All her experience at that level was necessary to control until the last seconds in order to add a 7th medal on a Grand Prix for the Brazilian.

In the second bronze medal contest the 2018 Tashkent Grand Prix bronze medallist, Agata PERENC (POL), was opposed to 2016 Olympic silver medallist JEONG Bokyeong (KOR). After less than a minute, JEONG scored a close to Ippon waza-ari with a spectacular left handed morote-seoi-nage and she then just had to control the rest of the match to win the bronze medal. 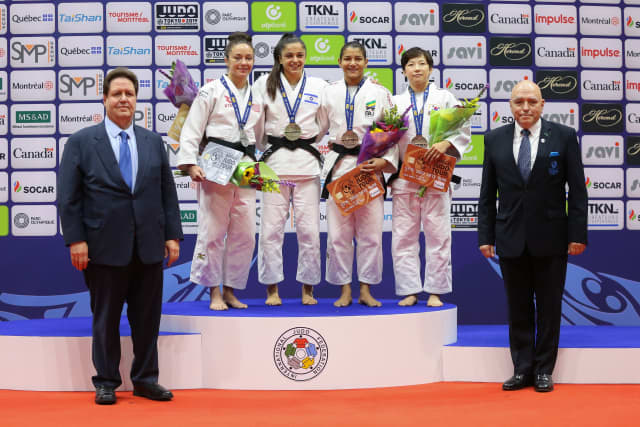 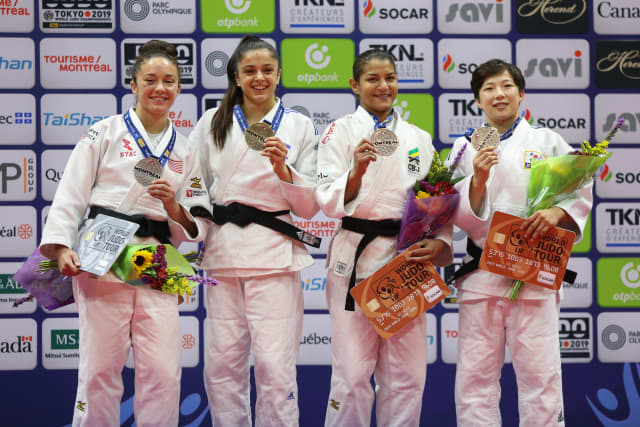 This was the most awaited category for the home fans as Christa DEGUCHI, who won two Paris Grand Slams in a row (2018 and 2019), and Jessica KLIMKAIT (CAN), winner of the last Osaka Grand Slam at the end of 2018, were the obvious two favorites in the women's -57kg weight division. Without any surprise, the two young ladies qualified for the final. Both of them are definitely dreaming of Olympic Games, but there will only be one spot on the list for the two Canadian athletes. 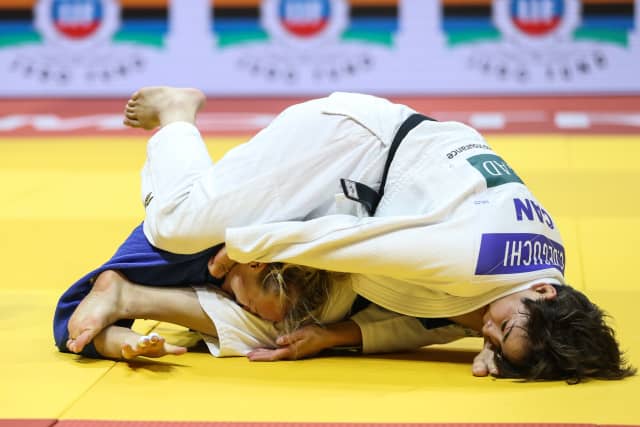 The public could shout 'Go Canada', the risk taken to know the color of the flag at the end of the day was reasonable. After one minute, KLIMKAIT was penalized with a first shido for a forbidden gripping. It is during the following sequence that Christa DEGUCHI demonstrated her talent when she applied a shime-waza, with no chance for Jessica KLIMKAIT to escape.

The first bronze medal contest opposed the 2017 Junior World Championships bronze medallist, Mina LIBEER (BEL) and the 2019 Marrakech Grand Prix bronze medallist, Timna NELSON LEVY (ISR). Half way to the end of the match, only one shido had been given to LIBEER for passivity. NELSON LEVY clearly looked like she was about the take the control and that is was she did after a powerful sequence on the floor. She concluded with an immobilisation for Ippon.

In the second bronze medal contest the 2013 Samsun Grand Prix silver medallist, Johanna MUELLER (GER) faced the 2019 Antalya Grand Prix gold medallist, Julia KOWALCZYK (POL). After a long competition day, KOWALCZYK had to wait until the third minute of golden score to win the bronze medal with a waza-ari scored on the edge of the competition area. 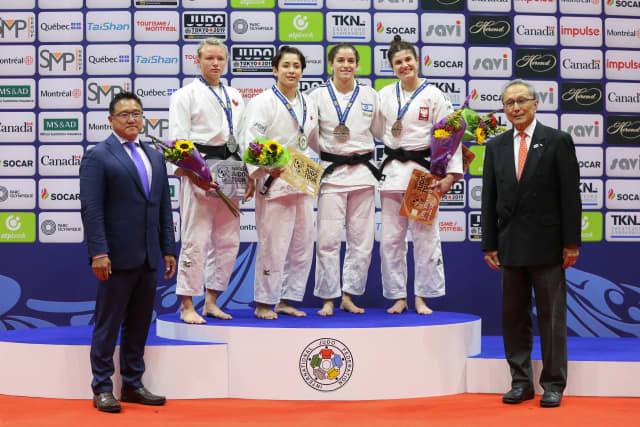 DEGUCHI, Christa (CAN) vs. KLIMKAIT, Jessica (CAN) 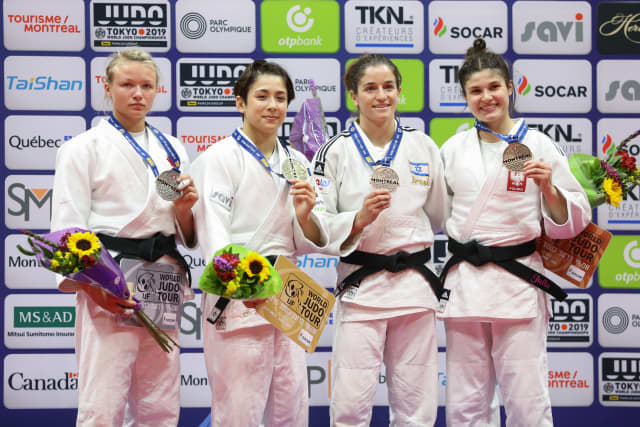 -60kg: No one to Challenge World Champion Takato

Big names were on display in the men's -60 weight division. Robert MSHVIDOBADZE (World Judo Master 2018, World Silver Medallist 2018) and TAKATO Naohisa (JPN) were the top seed athletes and after perfect preliminary rounds, faced again in the final for a rematch of the last world Championships final. 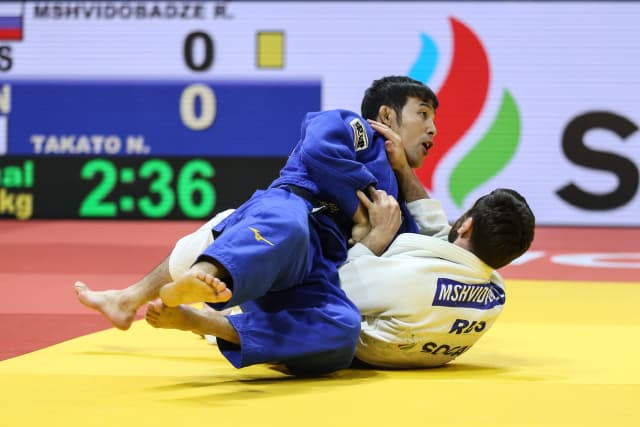 After a little bit more than 30 seconds, MSHVIDOBADZE was penalized with a first shido for false attack. Nothing seemed to disturb the current World Champion, who on the first occasion 'crucified' MSHVIDOBADZE with a perfectly executed uchi-mata for a clear Ippon. 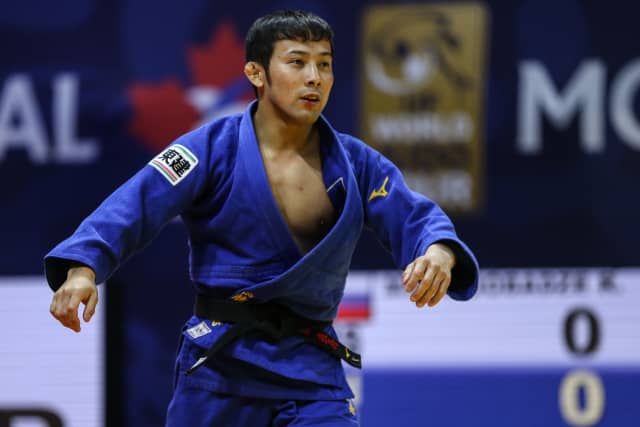 The 2018 Zagreb Grand Prix silver medallist, Adonis DIAZ (USA) and 2019 Pan-American silver medallist, Eric TAKABATAKE (BRA) were qualified for the first bronze medal contest. Half way to the end, DIAZ scored a first waza-ari to take the lead of a match that he clearly seemed to dominate. Despite a few strong and powerful attacks of TAKABATAKE, DIAZ controlled the last seconds to win the bronze medal.

The 2015 Junior World Championships silver medallist LEE Harim (KOR) and the 2019 Antalya Grand Prix bronze medallist, Ashley MCKENZIE (GBR), faced in the second bronze medal contest. After one minute, LEE was penalized a first time with a shido for blocking his opponent, which was followed by a second penalty as the end of the bout was approaching. It was then MCKENZIE's turn to the penalized just before the golden score and just after the extra-time started. After 43 seconds, MCKENZIE produced an effort that was countered by LEE but for no score after the video-reviewing. As the golden score was going on, neither LEE nor MCKENZIE seemed to be able to score, when the Korean executed a last Korean-style reverse soie-nage to score the waza-ari that was needed to step on the podium. 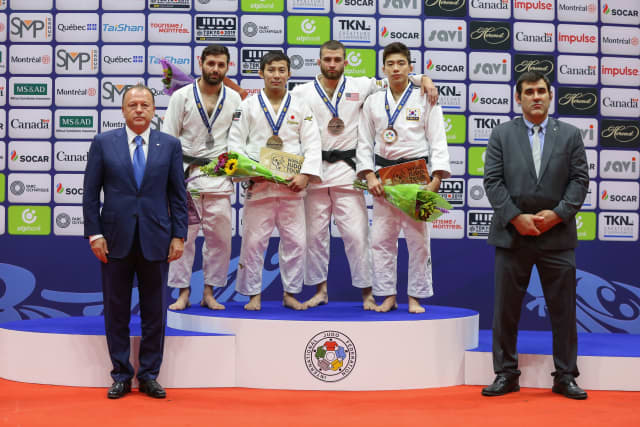 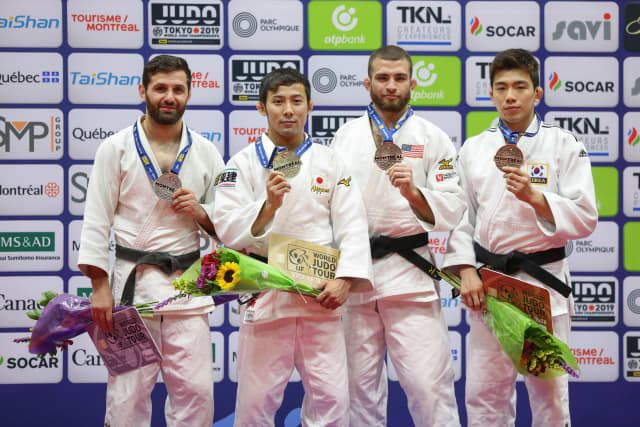 -66kg: Ganbold Wins a Grand Prix for the third time

2017 World Master champion, GANBOLD Kherlen of Mongolia was opposed to Kenneth VAN GANSBEKE of Belgium, who so far had no record on the international scene. 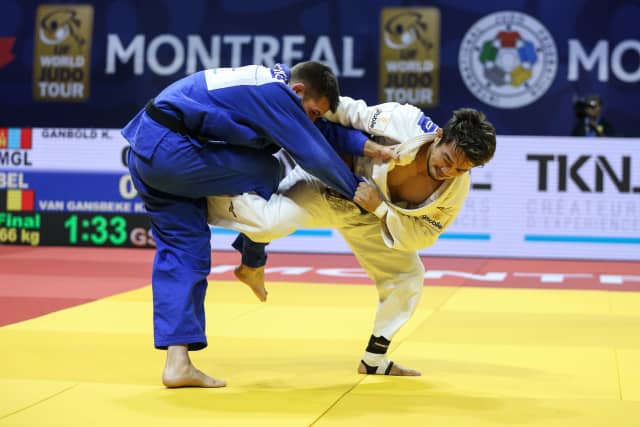 After four minutes of regular time, both athletes had only one shido each to their name and as they entered the golden score, there were still trying to find the slightest opportunity to score. After more than 4 minutes and a half, VAN GANSBEKE was finally penalized a third time offering his third gold medal in a Grand Prix to GANBOLD.

The first bronze medal contest opposed Jacob VALOIS (CAN), bronze medallist at the 2019 Pan-American championships, and Nathan KATZ of Australia. Competing at home has always been an advantage, and for sure the support of the Canadian public definitely helped VALOIS to win the firs medal for the host country of the Montréal Grand Prix. Even if the whole match was a bit confused, Jacob VALOIS could score a waza-ari with a tomoe-nage, enough for the public to explode with joy and properly celebrate their new medallist.

In the second bronze medal contest the 2019 African Championships silver medallist, Imad BASSOU (MAR) was opposed to Nathon BURNS (IRL), who finished seventh at the last European Games. For his first appearance on the scene of a World Judo Tour event, BURNS scored a beautiful Ippon on a shoulder movement, precisely on the final gong to win his first Grand Prix medal. 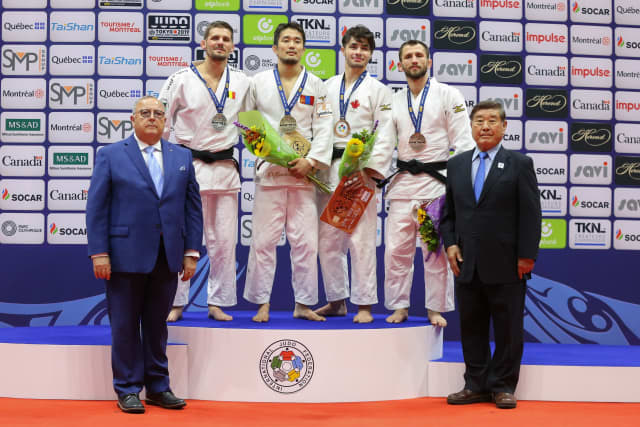 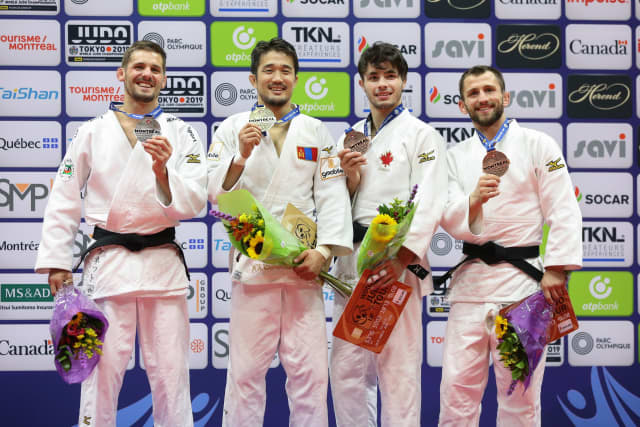