Written by Nicolas Messner on 07. Jul 2019
Share
For the second day of Judo at the inaugural Montreal Grand Prix, Japan striked twice again, when Korea and Germany win gold as well. Canada wins four medals at home in front of an amazing public.

The first final of the day opposed Amy LIVESEY (GBR) and CHO Mokhee (KOR), although the Canadian public hoped to see top seed of the tournament, Catherine BEAUCHEMIN-PINARD, compete for gold. But the 2019 Pan-American champion was eliminated by Amy LIVESEY in the semi-final, as the British had an amazing way to the final since the morning, winning all her matches by ippon. In the second half of the draw, CHO Mokhee was the surprise of the day, successively defeating Lubjana PIOVESANA (GBR), Katharina HAECKER (AUS) and Gili SHARIR (ISR) to go for gold. 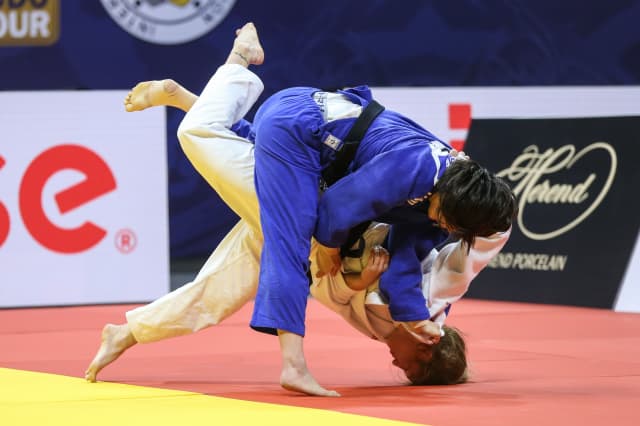 It was right-handed LIVESEY who scored first against the left-handed CHO, thanks to an uchi-mata, valued waza-ari on the edge of the tatami. Perhaps a bit too confident, the Brit launched her favorite technique again. But this time Kim was waiting at the corner of the wood and she dodged intelligently to mark in turn a waza-ari. The third uchi-mata was almost the good one for LIVESEY, but the Korean managed inextricably to land on her stomach. Time for Golden Score had come. It was written that the match would end on a victorious uchi-mata or with a counterattack of the latter, and that's what happened. LIVESEY launched her favorite technique again, but, perfectly positioned, CHO countered for a smug Ippon.

The first bronze medal contest of the day opposed the 2018 Cancun Grand Prix bronze medallist, Alexia CASTILHOS (BRA) and the 2018 Hohhot Grand Prix silver medallist, Gili SHARIR (ISR). After four minutes of intense battle to throw, none of the athletes were able to score. It is CASTILHOS who finally launched a left handed eri-seoi-nage for waza-ari to win her fourth medal in a Grand Prix.

The second bronze medal match saw Katharina HAECKER (AUS), silver medallist in Marrakech in March, and the 2019 Pan-American Champion Catherine BEAUCHEMIN-PINARD (CAN) compete for a spot on the podium. Being the first Canadian to enter the tatami during the final block of this second day of competition, the sound level suddenly raised in the arena. Smaller than her opponent, the Canadian still imposed a frenzied pace, chaining the sequences of kumikata and attacks, so much so that the Australian was penalized with a shido. Effective on the ground as well, BEAUCHEMIN-PINARD ended up finding the opportunity to overthrow HAECKER and immobilize her for Ippon. 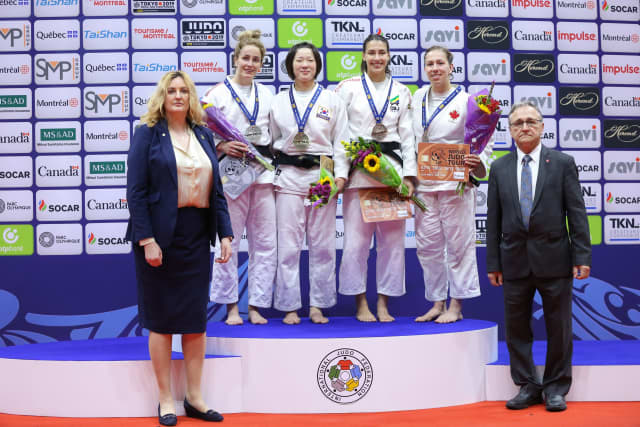 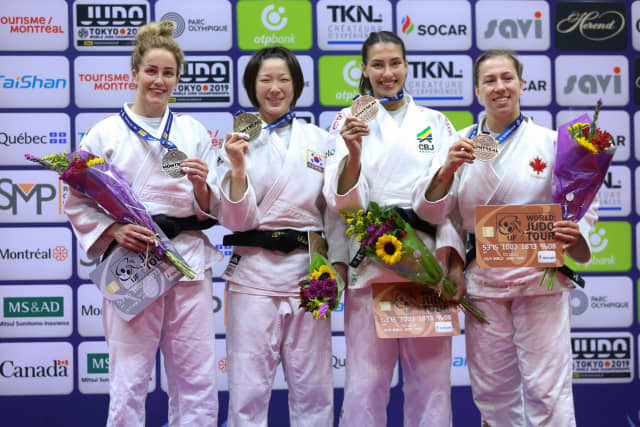 -70kg: First Success for SCOCCIMARRO in the Senior Division

At the beginning of the day, Maria PEREZ (PUR) and Assmaa NIANG (MAR) were the most likely athletes to be seen in the final, but none of the favorites could make it to the last match of the category. Roxane PERETAEYMANS (BEL) eliminated PEREZ, while the Moroccan NIANG was defeated during her first bout by KIM Seongyeon (KOR). The final opposed the 2017 Junior World Champion, Giovanna SCOCCIMARRO (GER) and Kelita ZUPANCIC (CAN), which definitely made the public very happy. World Master silver medallist back in 2013, ZUPANCIC had an irregular season so far, winning a bronze medal in Hohhot a few weeks ago and a bronze medal at the Pan-American Chammpionships. But in front of her public, ZUPANCIC found the energy to push to the final. 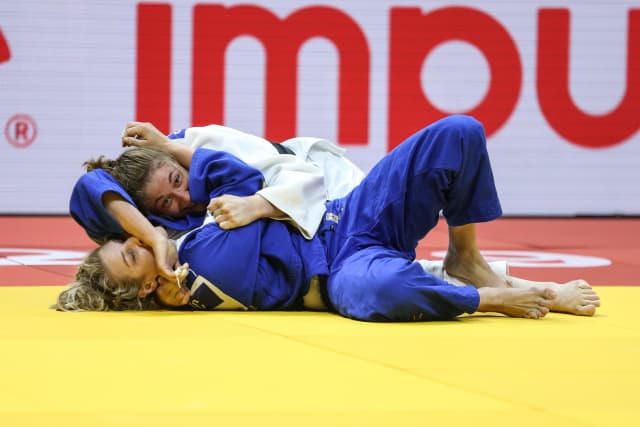 For three minutes and a half, the match seemed fairly balanced, with none of the athletes able to really endanger the opponent. As the end of the bout approached, ZUPANCIC launched a counterattack that was clearly out of control. She was quickly on the ground, on her back, SCOCCIMARRO above her in immobilization position. Ippon! The gold medal hopes for Canada's ZUPANCIC were over, while SCOCCIMARRO was celebrating her first success at the senior level. 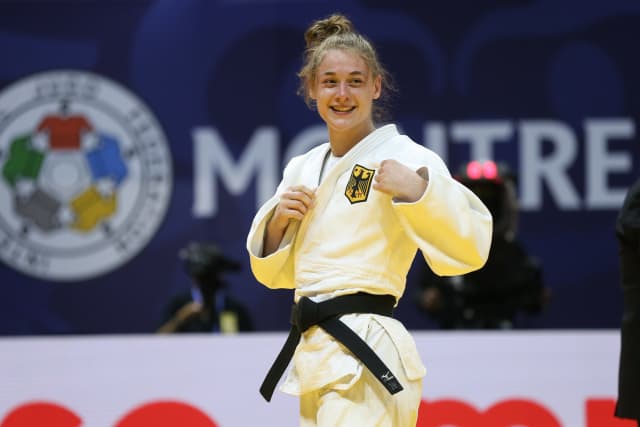 The first bronze medal match opposed the silver medallist of the Marrakech Grand Prix this season, Megan FLETCHER (IRL) and Gabriella WILLEMS (BEL), bronze medallist of the 2018 The Hague Grand Prix. After 2 minutes en 10 seconds without any score and after a long sequence on the floor, WILLEMS thought that she had won by Ippon, when FLETCHER tapped on an armlock. But after reviewing the video, the ippon was cancelled and the Belgian disqualified as she was not applying the lock on the elbow but on the wrist, which is forbidden.

In the second bronze medal contest KIM Seongyeon (KOR), second of the 18th Asian Games in Jakarta 2018, was opposed to Roxane TAEYMANS (BEL), second at the Tunis Grand Prix 2018. It is only in the last seconds of regular time that a first shido was given to TAEYMANS, followed by a second one a few seconds into Golden Score. After 2 minutes and 44 seconds of extra time KIM finally scored a delivering waza-ari with a drop-seoi-nage. 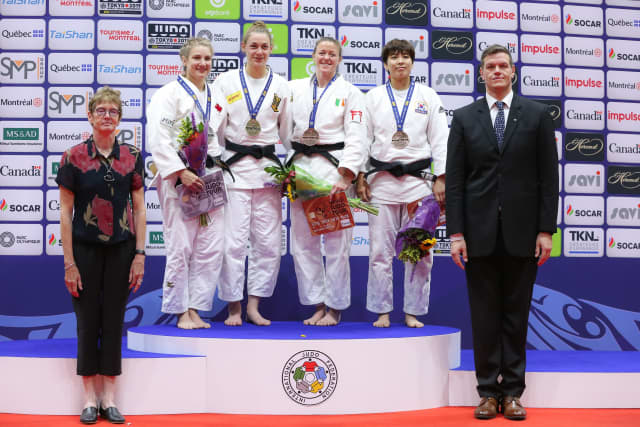 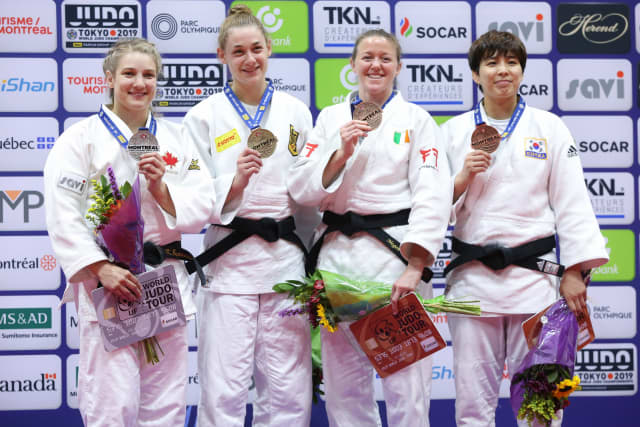 The -73kg category produced incredible matches throughout the preliminary rounds, to the delight of specialists and fans present at the Maurice Richard arena in Montreal. In the game of prognosis it was not hard to imagine that HASHIMOTO Soichi would be present in the final, which the Japanese did without forcing his tallent, since he won his first three bouts by Ippon. Against him to play gold, a well-known athlete on the international circuit, since the representative of the United Arab Emirates, Victor SCVORTOV, world bronze medalist in 2014, eliminated in the semifinals the Canadian, Arthur MARGELIDON (CAN) to get a new chance to secure a medal at this level. 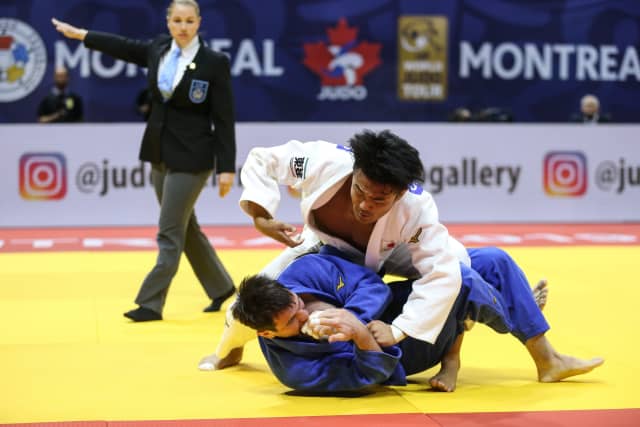 After one minute, both athletes were penalized with a shido for passivity. HASHIMOTO seemed to be totally in control of the match though and after having scored a first waza-ari on a counterattack he concluded on the floor with an arm-lock for Ippon. 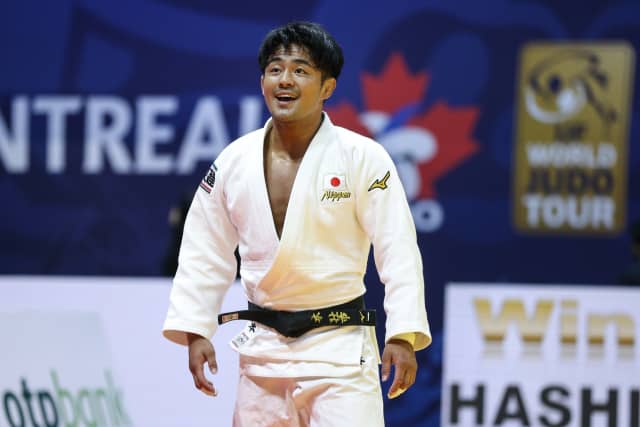 The first bronze medal match opposed Anthony ZINGG (GER), holder of already three Grand Prix bronze medals and Arthur MARGELIDON (CAN), already present on the podium of the 2019 Hohhot Grand Prix. It is with a nice piece of ground work that Anthony ZINGG concluded the match, scoring Ippon with a shime-waza technique. This is the fourth medal for the German won on the occasion of a Grand Prix.

The second bronze medal contest opposed Eduardo BARBOSA (BRA), who's best place this season was a fifth place at the Ekaterinburg Grand Slam, and Antoine BOUCHARD (CAN), bronze medallist in Marrakech in 2019. To the delight of the Canadian public, Antoine BOUCHARD added one more medal to the list of medals won since the beginning of the competition by the Canadian squad, after a great work on the ground, which started with a sankaku-jime and ended with a victorious immobilization. 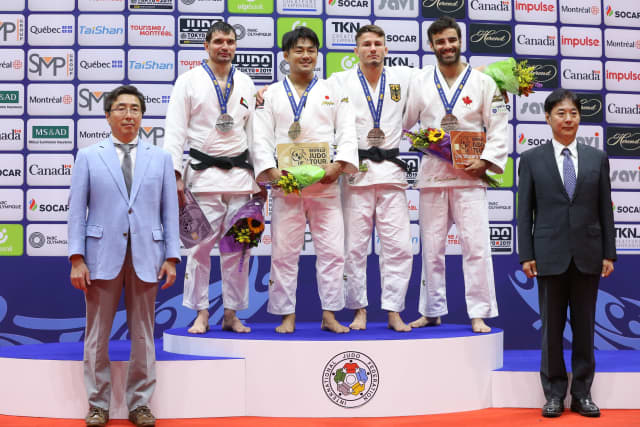 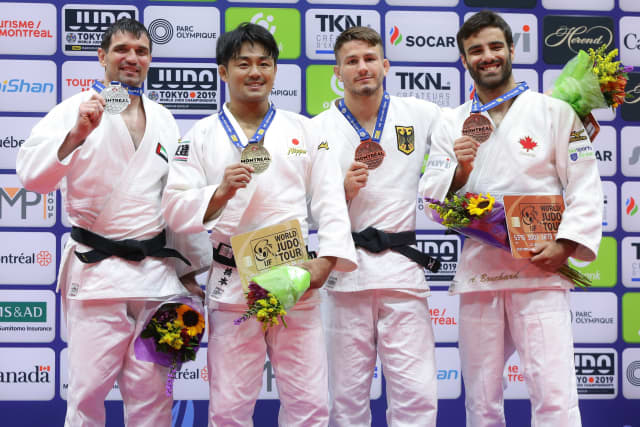 -81kg: Nagase in Style Adds a Fourth title for Japan

The Belgian Matthias CASSE, in the wake of his European title won on the occasion of the European Games in Minsk a couple of weeks ago, was hoping to enter the final again. But it was not counting on the presence of the Japanese, NAGASE Takanori, World Champion in 2015, who left no chance to the Belgian, while the latter had already had a difficult match in the previous round against the American Jack HATTON. In the final NAGASE found on his road the local hero, Antoine VALOIS-FORTIER, double world medalist and Olympic medalist who despite the small physical problems that marked his career, continues to rank regularly on the international circuit, with metronome accuracy. 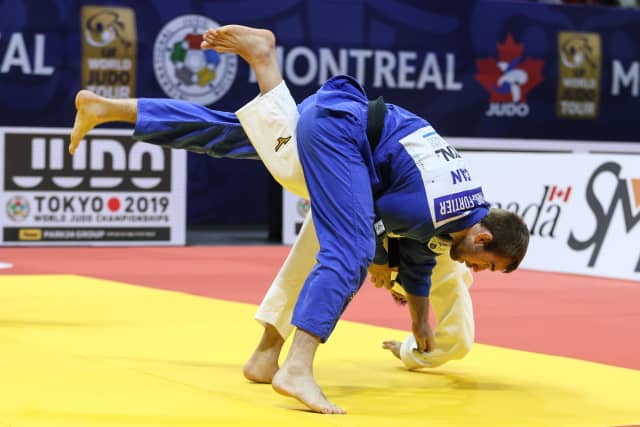 After a few seconds, VALOIS-FORTIER, made the arena vibrate by launching a first o-soto-gari, that slightly unbalanced NAGASE. The fight was balanced and for a moment was a very interesting battle of kumikata, in which the Canadian seemed to take a slight upward. The two competitors approached the edge, working mutually on the ends of the sleeve, when NAGASE launched a flash attack with a brillant uchi-mata, which left absolutely no chance to VALOIS-FORTIER to escape. Within the blink of an eye, the Canadian flew to land on his back. Ippon !! And fourth title for Japan. 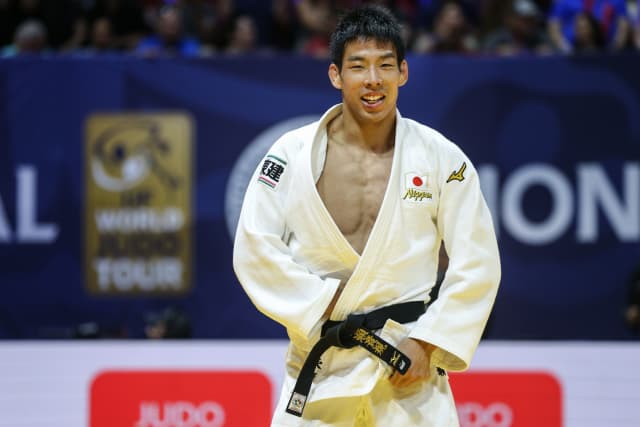 The first bronze medal match opposed the bronze medallist of the last Pan-American Championships, Jack HATTON (USA) and the silver medallist of the 2019 Düsseldorf Grand Prix, Aslan LAPPINAGOV (RUS). After four minutes, only shido were distributed, two for each. As a single shido could designate the winner, that is precisely when the match started to be really interesting, both HATTON and LAPPINAGOV taking risks. It is LAPPINAGOV who eventually won with a ko-soto-gake for ippon.

In the second bronze medal contest, Timo CAVELIUS (GER), silver medallist in Tbilisi this season, faced the 2019 European Champion Matthias CASSE (BEL). The first notable moment of the match was at the very beginning of Golden Score, when CASSE managed to immobilize his opponent on the floor but not long enough to score. Visibly tired after his European title and the trip to Canada, CASSE finally found an ounce of energy to launch a last-chance drop-seoi-nage, scoring a waza-ari to get on the podium. 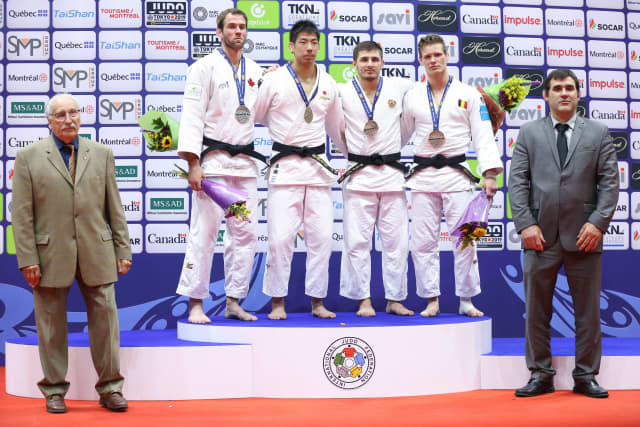 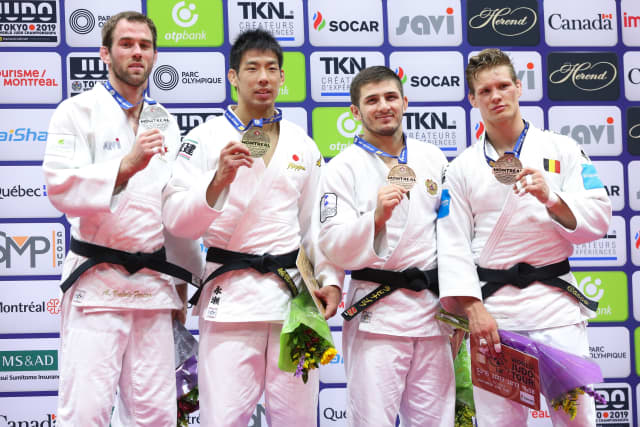