Keep an Eye on Christi-Rose Pretorius: Youngest Athlete on the WJT

Written by Christian Pierre on 30. Jul 2019
Share
Sixteen-year old Christi-Rose Pretorius’ debut on the IJF World Judo Tour in Zagreb might have gone by unnoticed, but that’s OK since the main goal in Zagreb of this sixteen-year old athlete from Zimbabwe was to learn and gain a lot of experience competing against better athletes. 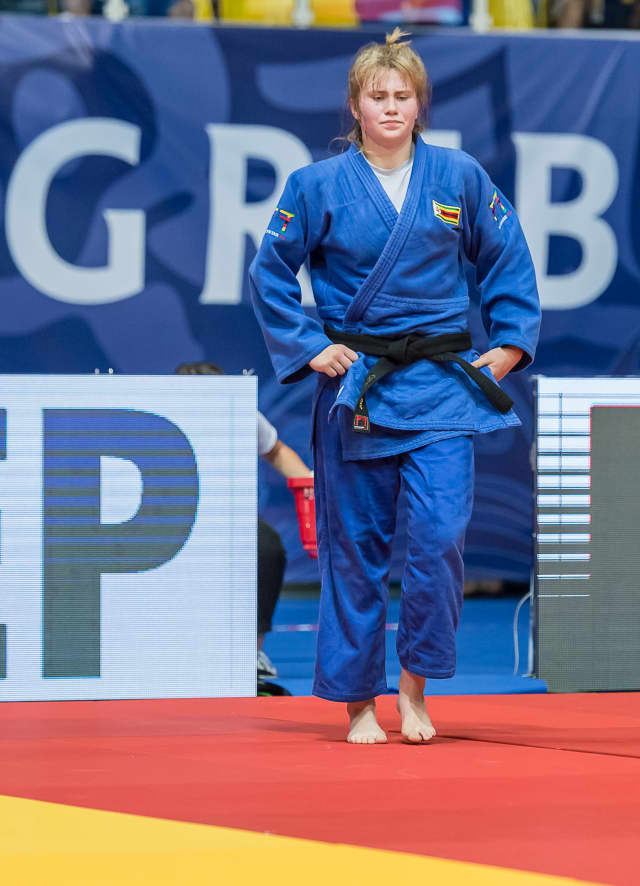 Although statistically she didn’t really stand a chance in the -78kg category against her first opponent, Japanese Mami Umeki, accomplished judoka, 2015 World Champion and currently 7th on the World Ranking, she wasn’t too intimidated when she entered the tatami for her first ever bout on the World Judo Tour.

“I admit, it’s a bit scary, but it’s a great experience. Hopefully one day I can put my mark. I’m one of the few judokas of my country, so I try my best to do my country proud,” says the youngster who names Ilias Iliadis and Kayla Harrison as her judo heroes.

Although confronting a strong opponent, she was determined and confident. “I have nothing to lose, but to gain being so young. Moreover, it’s my first Grand Prix, so I just went for it. I feel honored as not many athletes get a chance to experience this. Being a cadet, it is quite intimidating seeing all these World and Olympic champions but I kind of block that out. We’re all the same, we’re all judokas on the tatami. I’m happy with the result of my first bout on the World Tour. I didn’t get floored in the first seconds, so that felt good. I lasted quite a while.” 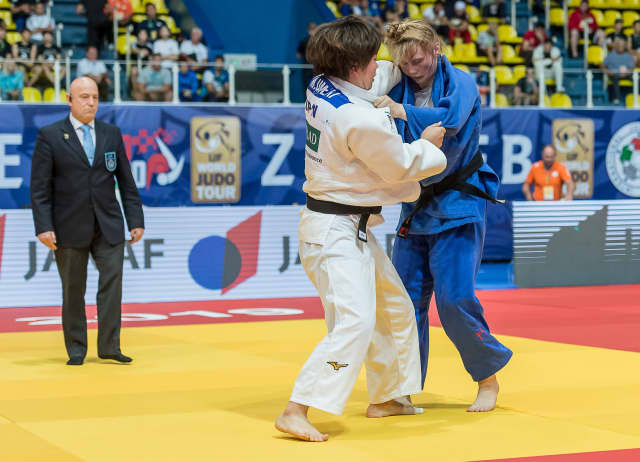 “For Christi-Rose being here is a natural progression for an athlete of her ability,” her coach Chris Bowles, a former Olympian, adds. “In the cadets, she’s ranked number two in the world and in juniors she’s ranked as well. There is no harm in keeping athletes of Christi-Rose’s caliber from experiencing. And to be honest when we saw the draw, facing the Japanese, it was rather the icing on the cake. It was by far not the worst draw. It was actually the best draw for her. It’s great for the experience. Being in the tunnel with the Japanese and coming out together with that former World Champion, is just phenomenal. It’s the way how champions are bred. If you can point and steer in the right direction, as long as it is the right direction, then she will be absolutely fine. And I’m sure she will develop into a good senior. Christi still has to drop back and develop as a cadet and as a junior of course, that’s part of the pathway that she’s on. But it’s important that she does sample. If you look back at all the big champions, like Iliadis for instance, they came through the same system. It is the right way. But you have to have the right person. They have to show a lot of courage and not be phased by a big arena.” 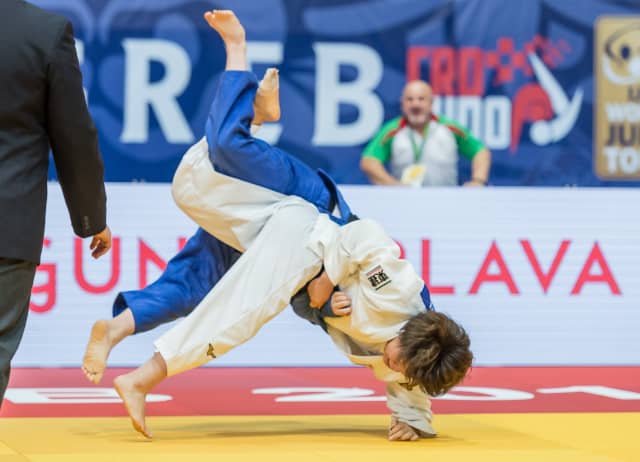 That’s why before Christi-Rose got out there taking it all in. In a quiet moment before the competition started, her coach took her through the tunnel, guiding her through all the motions of walking out, telling her it’s not a big deal. “OK, she’s up against one of the best in the world, but don’t go out there and freeze. Enjoy it, embrace it. And I think she didn’t do it too badly,” coach Bowles says.

“If she wasn’t good showing as a cadet and junior then of course bringing her here is not the right thing. However, she is. Christi-Rose is training with senior women and men. Why would you not give somebody the opportunity to develop. Lots of great judokas in the past had that experience.”

A native from Zimbabwe, Christi-Rose lives and goes to school in Great Britain. She trains at Tonbridge Judo Club with her coach Chris Bowles and assistant-coach Ben Urban. “Nevertheless, I’m still close with my teammates in Zimbabwe and also proud to be Zimbabwean. It’s a beautiful country and the people are also so nice. I’m staying loyal to them.”

The teenager has busy schedule ahead. “Next, I have the African Games, followed by the Cadet Worlds in Almaty, Kazakhstan. I will also compete at the Tashkent Grand Prix in Uzbekistan for another GP experience and then I also got the Junior Worlds … and maybe the Senior Worlds as well if I get funded. Quite busy indeed.” 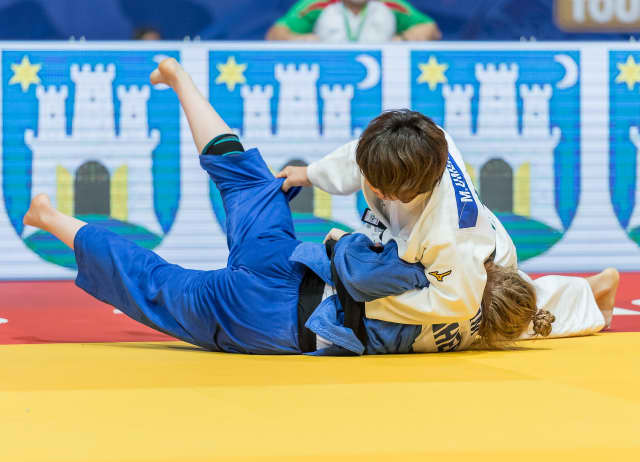 “The problem she has, is funding. Currently she is self-funded”, adds coach Bowles. “So, we have to pick wise for Christi-Rose where to go to, to get the experience. She still is a cadet; hence, the Cadet Worlds are her target this year beyond any doubt. A medal there will be the number one priority.”

“What’s great about a project like Christi’s is that as a club we can also help to lay a foundation for Zimbabwe Judo,” Assistant-Coach Ben Urban adds. “The federation has now been put on the map and has a presence on the World Tour and the country has a 16-year old judoka on the Tour. By the time she’s 20, there might be more.” 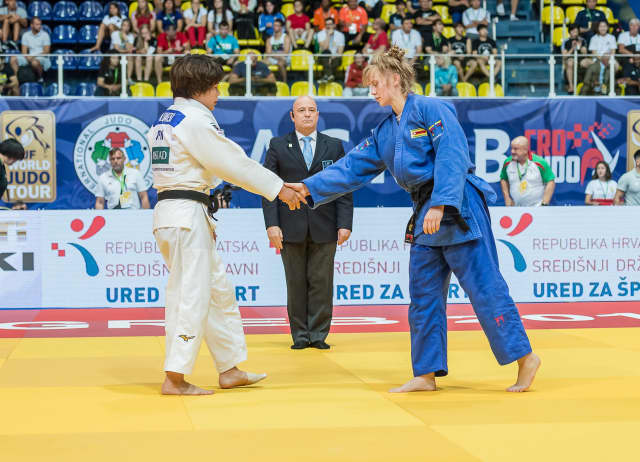 “When she gets a good ranking on the continental events, she can even rack up enough points and maybe we might see her at Tokyo 2020,” says Chris Bowles. “The first Olympic Games for most athletes is an experience. The second time is for business. Christi will observe and she can throw.”

“The girls and guys she trains with at the club are her age,” says Ben Urban. “It’s really important she still enjoys judo as a cadet.”

“I’m so lucky because I have such opportunities a lot of people don’t get,” Christi says.

“Let’s not forget she works very hard for it”, Chris Bowles adds. “No day goes by or she’s working on her judo in one or another way. The harder she works, the better she’s getting. Her family backs her fully and she doesn’t let them down. She loves judo and that’s how it works. You got to love it.”