NAGAYAMA and SHISHIME at the double for Japan

Written by Mark Pickering on 12. Dec 2019
Share
Japan lead the medal table after the first day of the World Judo Masters in Qingdao, China ahead of Italy and Kosovo.

Defending champion Distria KRASNIQI (KOS) defeated world number 33 GANBAATAR Narantsetseg (MGL) to keep the -48kg Masters title in Kosovo. KRASNIQI launched the Mongolian outsider on the edge of the area after Masters debutant GANBAATAR was on the receiving end of a utsuri-goshi for a waza-ari score in the second minute of golden score as Kosovo struck first in Qingdao. 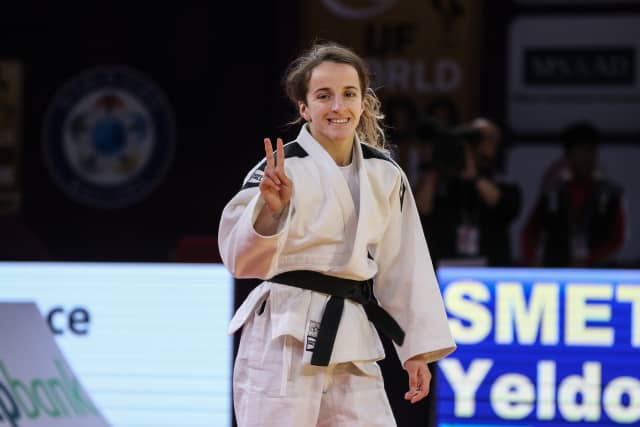 The first bronze medal contest was won by world number eight Irina DOLGOVA (RUS) who extended her one-sided head-to-head record over STANGAR to 3-0 by ippon after 90 seconds with ashi-waza.

The second bronze medal was won by world number 10 Melanie CLEMENT (FRA) who surprised MUNKHBAT after 84 seconds of golden score by a waza-ari to earn her first World Judo Masters medal. 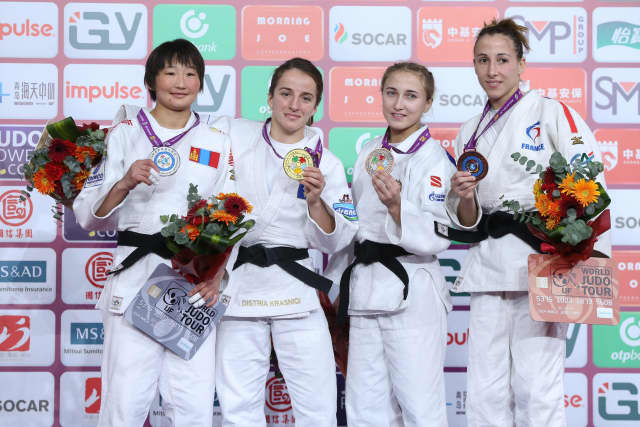 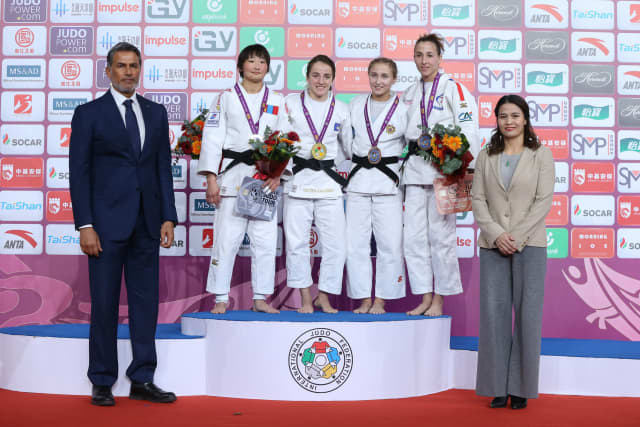 -52kg: SHISHIME wins the Masters at her first attempt

Former world champion SHISHIME Ai (JPN) defeated world number one Amandine BUCHARD (FRA) to win World Judo Masters gold as she holds on to her feint hope of selection for the Tokyo 2020 Olympics. SHISHIME, who is behind double world champion ABE Uta (JPN) in the Japanese pecking order, made sure that BUCHARD ended her day on the losing side of a Masters final for the third time. The Frenchwoman, who came into the invite-only event on the back of winning the Osaka Grand Slam, failed with an uchi-mata and was rolled over for a waza-ari score after five minutes of additional time. 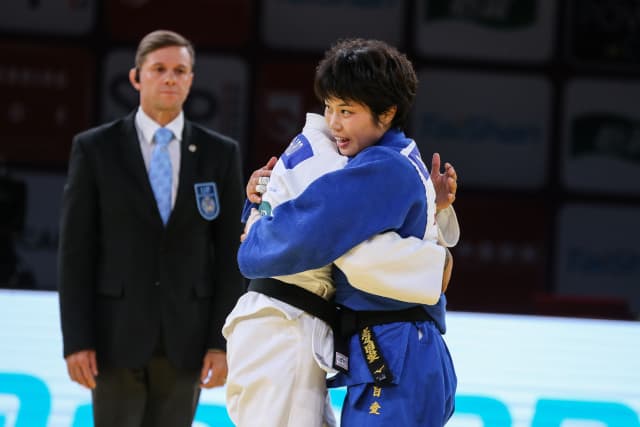 In the first semi-final Olympic silver medallist Odette GIUFFRIDA (ITA) lost the longest contest of the preliminary rounds against BUCHARD after six minutes and 37 seconds of added time. A waza-ari for the French judoka was the difference after a nervy encounter between two of the world’s elite in the -52kg category.

In the second semi-final Olympic bronze medallist Natalia KUZIUTINA (RUS) could not stop the run of SHISHIME who prevailed with a trademark uchi-mata.

The first bronze medal was awarded to world number 30 Diyora KELDIYOROVA (UZB) who stunned KUZIUTINA. Uzbekistan’s KELDIYOROVA upset the most prolific medallist in Russia’s women’s team by dropping under the veteran for a seoi-nage and spectacular ippon. KELDIYOROVA and her coach were all smiles after they united to bring home a first Masters medal from Uzbekistan’s fast-rising women’s team.

The second bronze medal was won by world number 20 Astride GNETO (FRA) after GIUFFRIDA was reprimanded for dropping in golden score which was her third penalty. GNETO secured her first Masters honour with a battling display as Italian GIUFFRIDA, who was troubled by an abrasion under her right eye, was again guilty of picking up too many shidos. 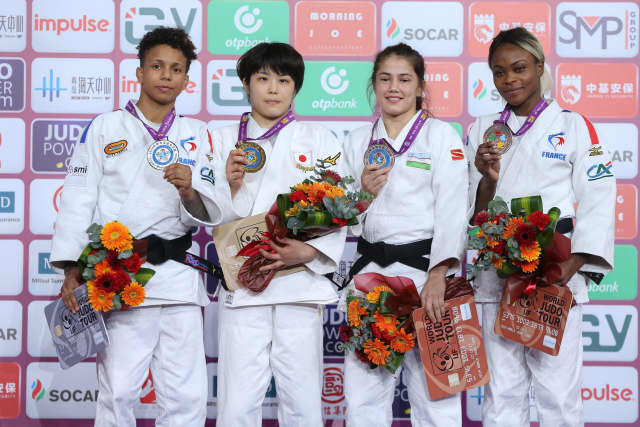 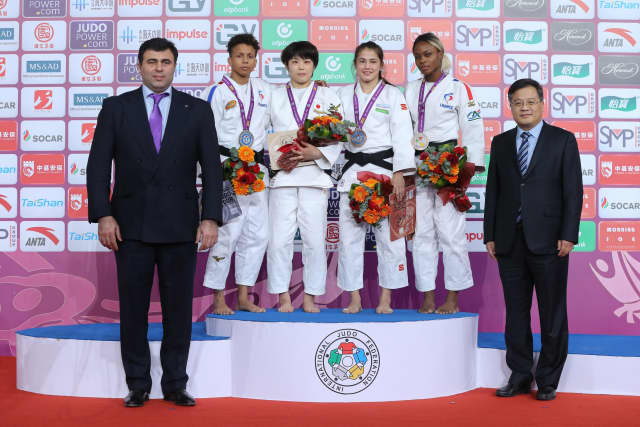 Abu Dhabi Grand Slam gold medallist KIM Jin A (PRK) became her country’s first World Judo Masters champion with a riveting display in the -57kg category. Osaka Grand Slam winner TAMAOKI Momo (JPN) met her match in the final as KIM pounced with a neat ashi-waza movement to offset the Tokyo 2020 contender for a waza-ari score to the delight of her travelling delegation. 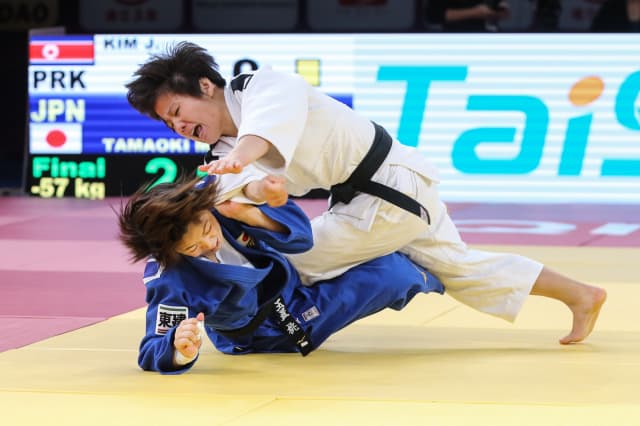 In the first semi-final KIM saw off world number seven LIEN Chen-Ling (TPE) in golden score after the Komatsu team member picked up her third shido in added time. 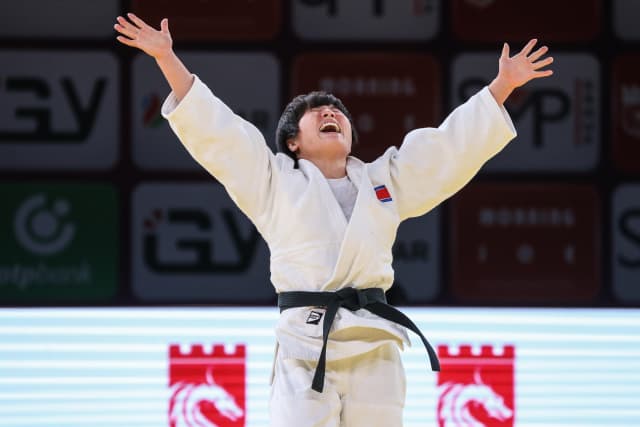 In the second semi-final former world champion YOSHIDA Tsukasa (JPN) lost out to TAMAOKI by a waza-ari score after four minutes of golden score.

The first bronze medal was awarded to former Osaka Grand Slam winner Jessica KLIMKAIT (CAN) who equalled their head-to-head series. A waza-ari score was the difference as the Canadian secured a place on the podium having seen teammate and world champion Christa DEGUCHI (CAN) bow out in the preliminaries at the hands of the in-form KIM Jin A (PRK).

The second bronze medal was won by Olympic bronze medallist Telma MONTEIRO (POR) after LIEN was dismissed in added time for picking up her third shido. Portugal’s win came against the run of play after the veteran narrowly escaped a couple of close calls for dropping as it was LIEN who was adjudged to have committed her third error to the disappointment of her Komatsu supporters. 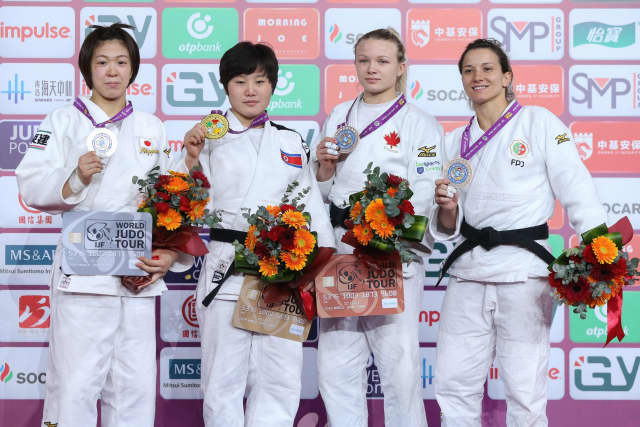 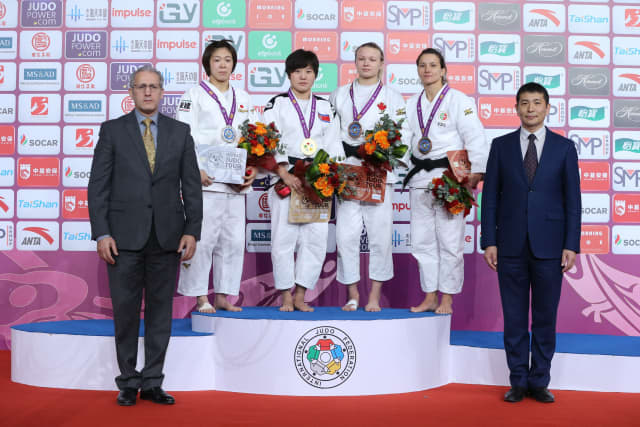 World number one NAGAYAMA Ryuju (JPN) conquered a star-laden -60kg field to repeat his 2017 Masters victory as he beat world number seven Francisco GARRIGOS (ESP) by ippon in the final. Tokai University member NAGAYAMA opened the scoring with a sumi-otoshi and ended the final in style with a uchi-mata-sukashi to put the pressure back on his teammate and three-time world champion TAKATO Naohisa (JPN) in the race for Tokyo 2020 selection. 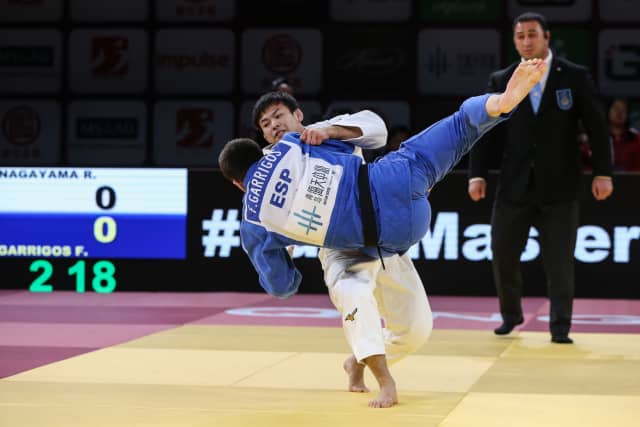 In the first semi-final NAGAYAMA beat world silver medallist Sharafuddin LUTFILLAEV (UZB) by ippon after just one minute as the Japanese ace continued to light up the preliminaries.

In the second semi-final former world champion Yeldos SMETOV (KAZ) was pipped by GARRIGOS of Spain by a waza-ari score.

The first bronze medal was won by world number six Robert MSHVIDOBADZE (RUS) who defeated SMETOV in golden score by a waza-ari score to add to Russia’s day one medal haul. 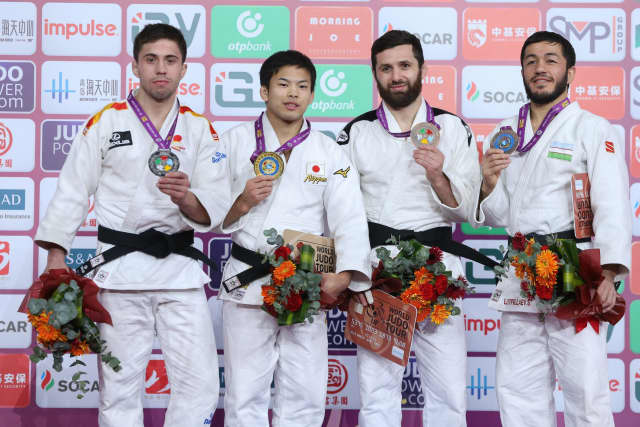 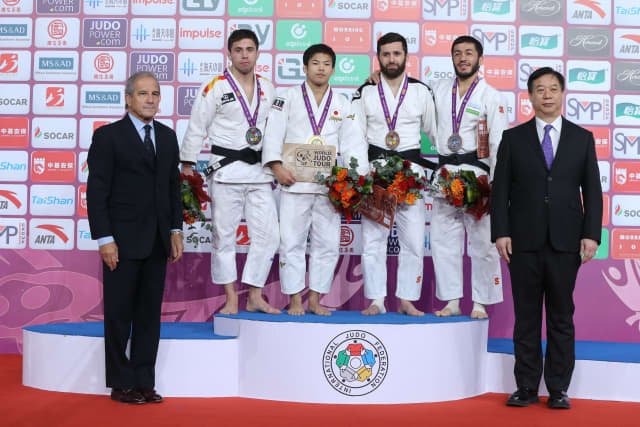 Abu Dhabi Grand Slam winner Manuel LOMBARDO (ITA) won World Judo Masters gold by conquering four-time Grand Prix winner GANBOLD Kherlen (MGL) in the -66kg final. The Italian hotshot made an immediate impact having qualified for his first Masters as he turned under the Mongolian to throw for a waza-ari score. Upon review, the score was upgraded as GANBOLD had bridged to try to escape and in doing so endangered himself to slip to defeat via the maximum score. 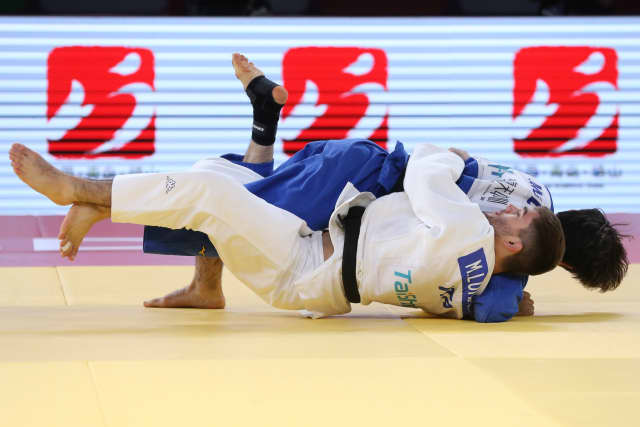 In the first semi-final three-time Grand Prix winner Adrian GOMBOC (SLO) fell to the impressive Italian LOMBARDO who followed up his waza-ari score by pinning the Slovenian for 10 seconds to book a place in the final.

In the second semi-final world number three Baruch SHMAILOV (ISR) was beaten by GANBOLD in the very last second of a lively contest. GANBOLD led before his Israeli rival restored parity with 35 seconds left and just as golden score was about to be summoned the former snuck in for a second and match-winning waza-ari.

The first bronze medal was won by three-time Grand Slam bronze medallist YONDONPERENLEI Baskhuu (MGL) who countered SHMAILOV for a waza-ari score in added time as Mongolia continued to impress on the opening day.

The second bronze medal went to world number five Vazha MARGVELASHVILI (GEO) who rushed past GOMBOC in four seconds by two scores. MARGVELASHVILI broke the deadlock with an uchi-mata for a waza-ari score and then lifted up the Slovenian with an ashi-guruma for ippon. 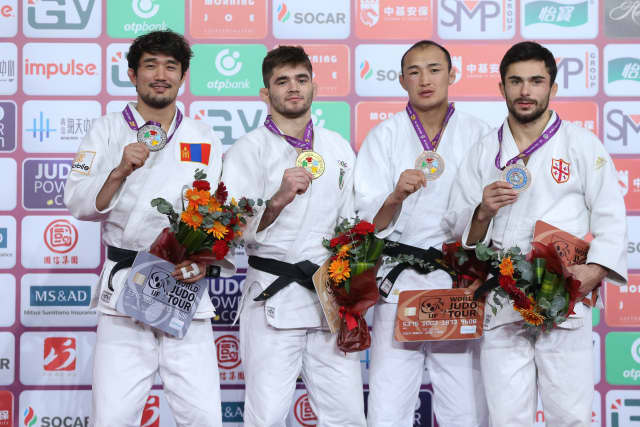 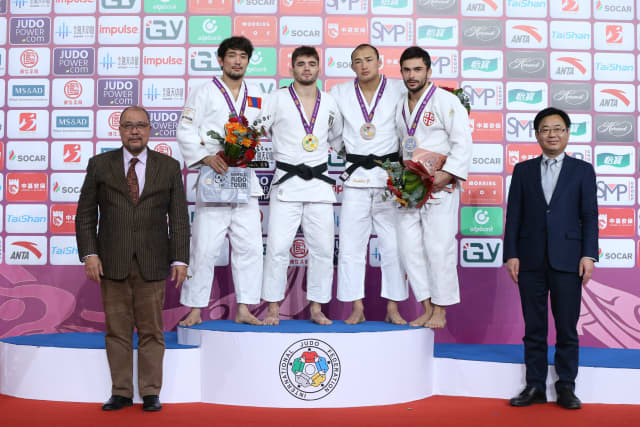