Written by Mark Pickering on 14. Dec 2019
Share
The Netherlands won two gold medals on the final day of the 2019 season to secure second place in the medal table behind Japan. Georgia, France and Japan also tasted gold on Saturday evening while the shock of the day belonged to teen star Lasha BEKAURI (GEO).

Women -78kg: POSVITE puts the category on notice after powering to gold

Osaka Grand Slam bronze medallist Fanny Estelle POSVITE (FRA) earned the best result of her career in her new home of -78kg with an irresistible display. POSVITE, who only moved up from -70kg to -78kg in March, now has eight medals from nine events at -78kg and defeated former world champion Audrey TCHEUMEO (FRA) to seal her first Masters title today. 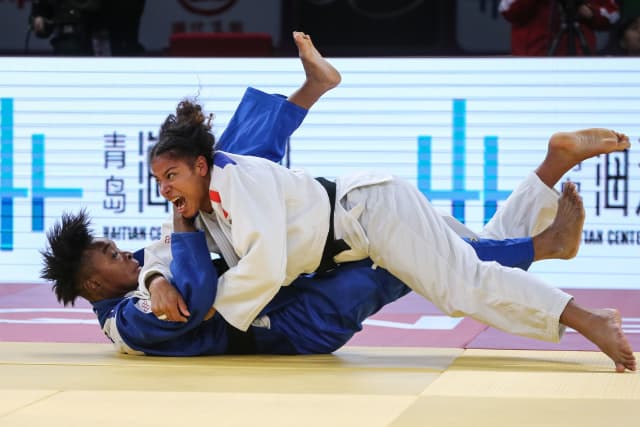 While France’s world champion Madeleine MALONGA slipped to defeat in her opening contest (against YOON Hyunji - KOR) it was POSVITE who triumphed from a trio of French stars in the category. POSVITE will jump up the rankings from 19th position but would have to do something extraordinary in the early part of 2020 to be selected over current number one MALONGA. 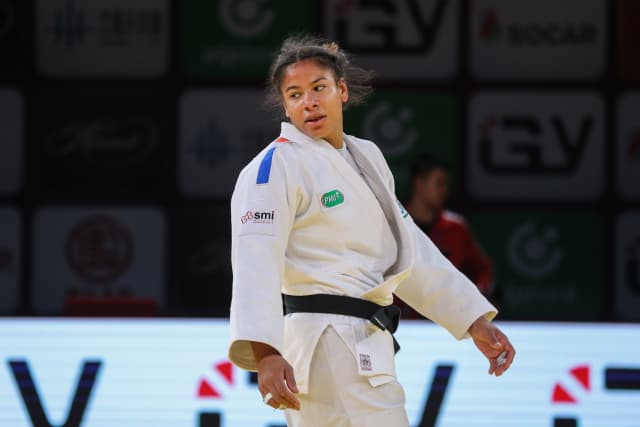 In the first semi-final two-time Grand Prix winner Anna Maria WAGNER (GER) lost out to the in-form POSVITE by ippon to ensure an all-French final.

The first bronze medal contest was won by home judoka CHEN who secured her country’s first medal of their home Masters. Former Tokyo Grand Slam bronze medallist YOON Hyunji (KOR) was below-par as she picked up her third shido for passivity to gift a place on the podium to the Chinese judoka.

The second bronze medal was won by WAGNER who conquered world number 27 LEE Jeongyun (KOR) after four minutes by a single waza-ari score to claim her first World Judo Masters prize. A de-ashi-barai was the difference as the German judoka utilised her well-timed ashi-waza to strike and end her year on a high. 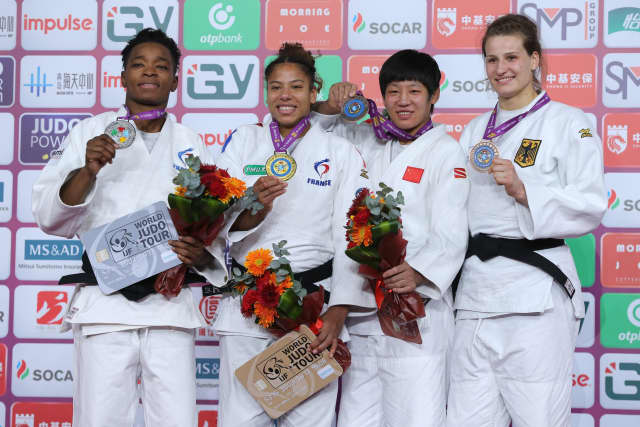 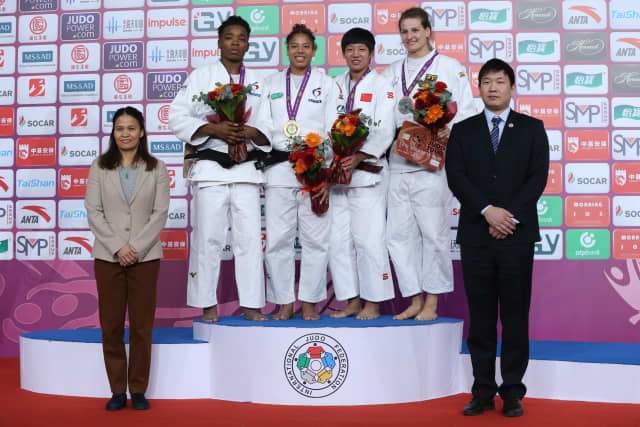 World number 25 Tessie SAVELKOULS (NED) won her first IJF title of the year at the final event of the season as the Dutchwoman won her country’s third gold medal in Qingdao. Former world bronze medallist Iryna KINDZERSKA (AZE) was outworked for the full four minutes of regulation time and was caught after 25 seconds of added time from a rolling seoi-nage for a waza-ari score. 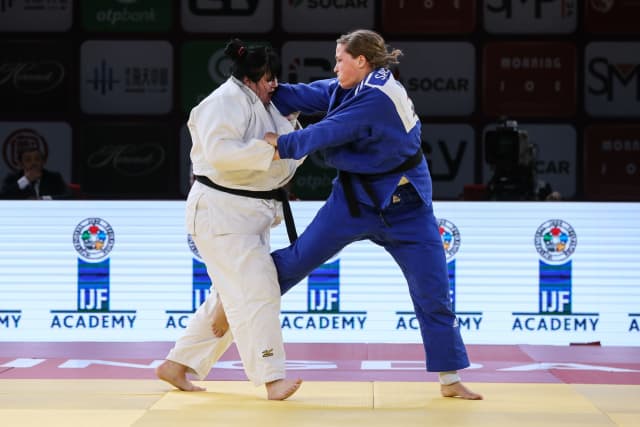 In the first semi-final KINDZERSKA thwarted teenager KIM Hayun (KOR) after three minutes by ippon while in the second semi-final world number 36 XU Shiyan (CHN) produced an error-strewn display to lose out against SAVELKOULS of the Netherlands.

The first bronze medal was won by world number 10 Maryna SLUTSKAYA (BLR) who saw off XU by ippon to deny the hosts a medal in their favourite weight category.

The second bronze medal was won by KIM after world number three Maria Suelen ALTHEMAN (BRA) received her third penalty for going out of the area after an insipid display where both judoka fought within themselves. 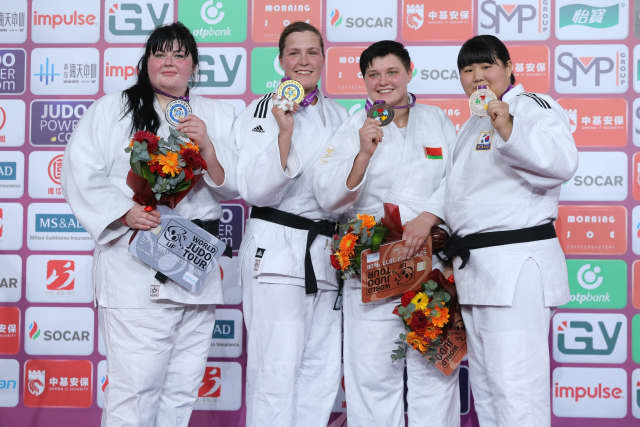 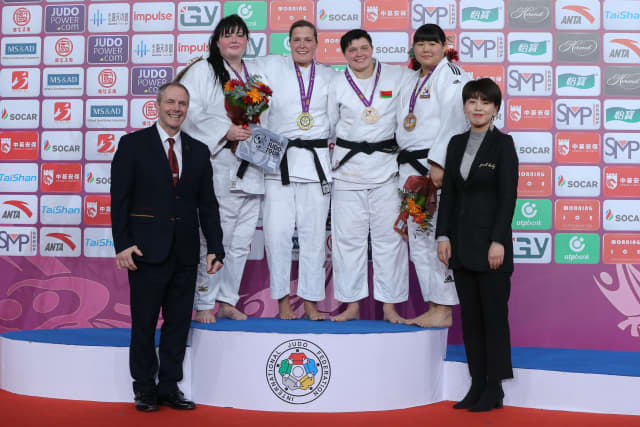 Junior World Championships gold medallist Lasha BEKAURI (GEO) starred on the final day of the IJF season as he defeated world number one Nikoloz SHERAZADISHVILI (ESP) in golden score. Georgian-born Spaniard SHERAZADISHVILI appeared to be shaping up for sutemi-waza and lost his balance while BEKAURI had control and the 19-year-old directed his opponent backwards for ippon and a remarkable victory. 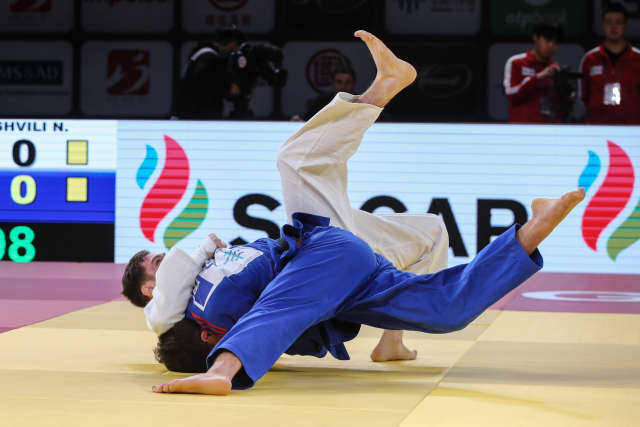 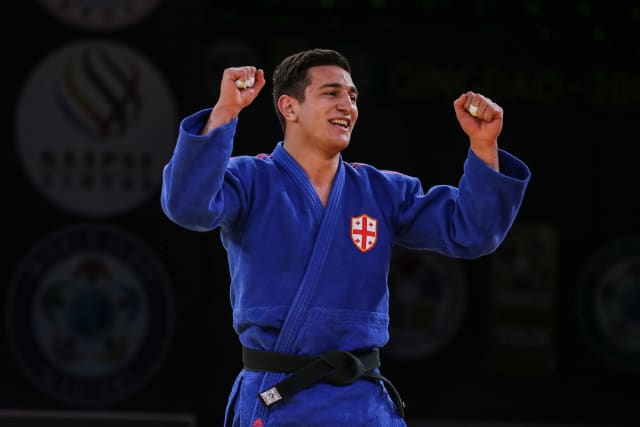 In the second semi-final world number 16 Mikail OZERLER (TUR) was stopped by BEKAURI after 49 seconds of golden score from a waza-ari score.

The first bronze medal was won by OZERLER after a lacklustre performance from world number 10 NAGASAWA Kenta (JPN) who was given his marching orders after picking up his third shido in golden score.

The second bronze medal went to MAJDOV after world number 18 Komronshokh USTOPIRIYON (TJK) stepped out of the area after two and a half minutes of golden score to receive his third and final penalty. 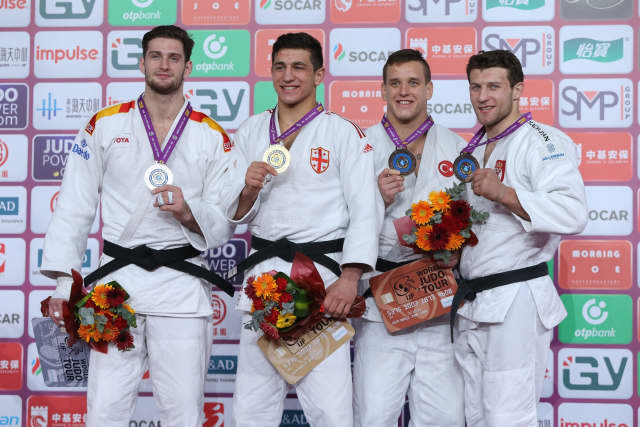 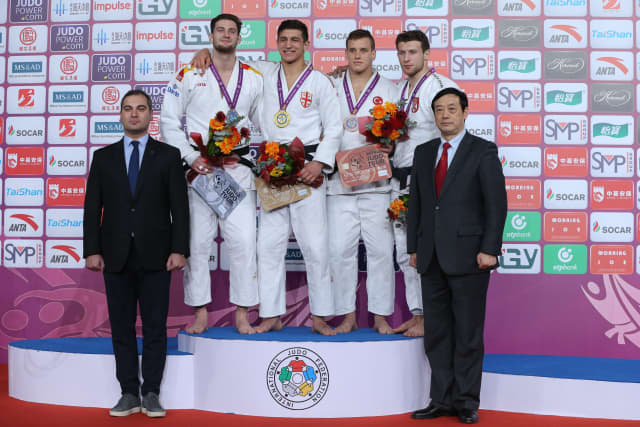 World bronze medallist Michael KORREL (NED) produced the performance of his career to beat former world champion WOLF Aaron (JPN) with a thunderous ippon after 27 seconds of golden score to claim his first Masters title. World number four KORREL threw his rival with a devastating seoi-nage to earn all the plaudits in one of the sport’s toughest and most talent-laden categories as he screamed with delight before making eye contact with his favourite matside photographer. 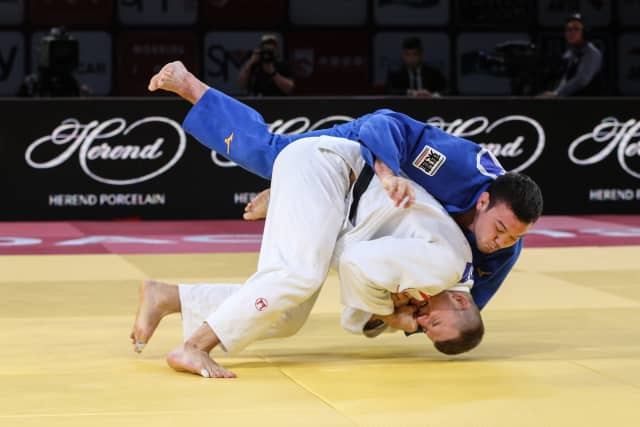 In the first semi-final Olympic silver medallist Varlam LIPARTELIANI (GEO) was stunned by KORREL by ippon as the Dutchman powered into the final in spectacular fashion with a gigantic uchi-mata. 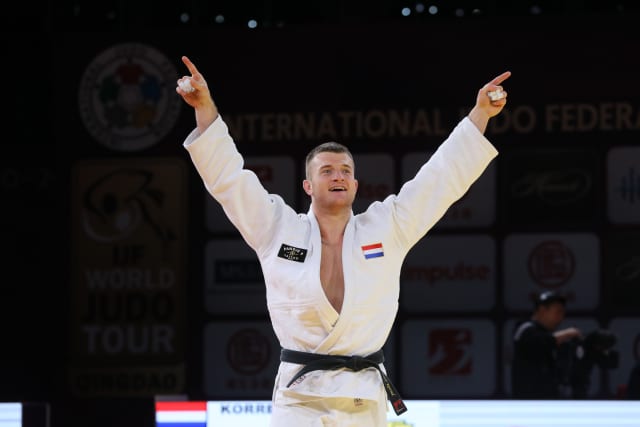 In the second semi-final world number 14 Niyaz ILYASOV (RUS) lost out to WOLF by a waza-ari score as the great INOUE Kosei nodded with approval at the progression of his athlete.

The first bronze medal was won by ILYASOV edged past world number 10 Peter PALTCHIK (ISR) by a waza-ari score in a tense contest that went the distance and beyond. PALTCHIK led by a waza-ari score before the Russian equalled the score with one second left to force golden score. ILYASOV landed on top of his rival and immediately held down the Israeli judoka with a tate-shiho-gatame to earn his place on the podium after a fascinating battle.

The second bronze medal went to LIPARTELIANI who defeated European Games winner Arman ADAMIAN (RUS) in the reserve of the European Games outcome. Georgia was on song on the final day and their inspirational leader played his part by picking up bronze before embarking on the most important year of his life in 2020. 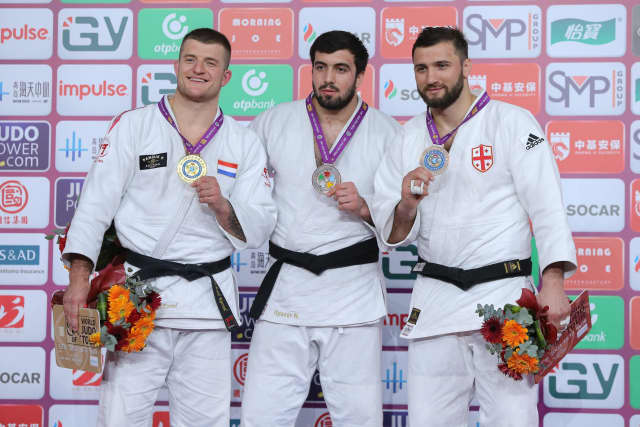 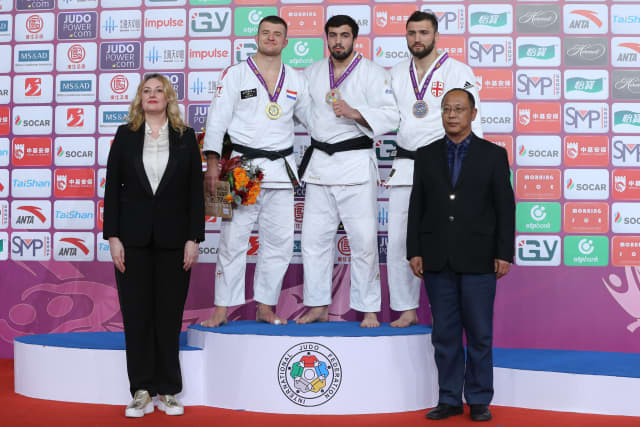 Olympic silver medallist HARASAWA Hisayoshi (JPN) was crowned the World Judo Masters heavyweight champion after the eagerly-awaited +100kg final could not take place because Olympic and world champion Lukas KRPALEK (CZE) was ruled out due to back pain. HARASAWA is seen as Japan’s leading heavyweight and the current front-runner for the Tokyo berth but April’s All Japan Openweight Championships will have a bearing on the selection for next summer. 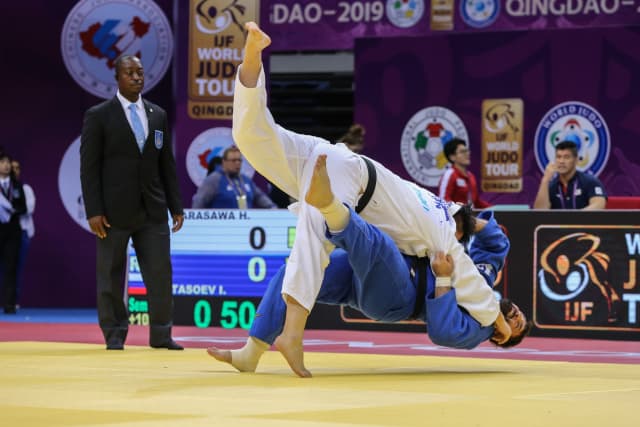 The first bronze medal was won by Osaka Grand Slam bronze medallist Kokoro KAGEURA (JPN) who floored TASOEV after 28 seconds for ippon. KAGEURA swept away the Russian with one of the ippons of the day as TASOEV was sent over onto his back with force.

The second bronze medal went to double Olympic bronze medallist Henk GROL (NED) who emphatically beat MOURA with a uchi-mata for ippon after 60 seconds to add to the Netherlands’ plentiful medal haul. 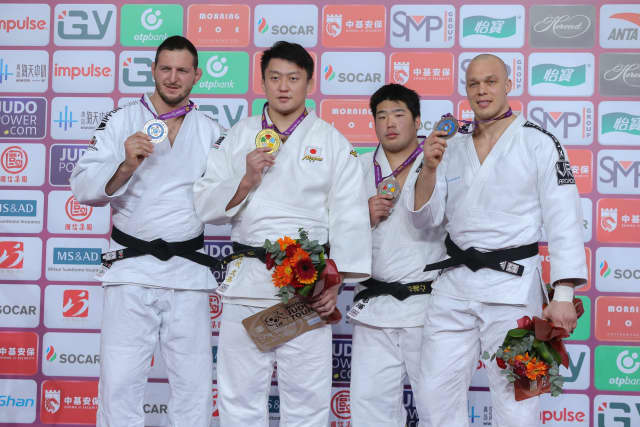 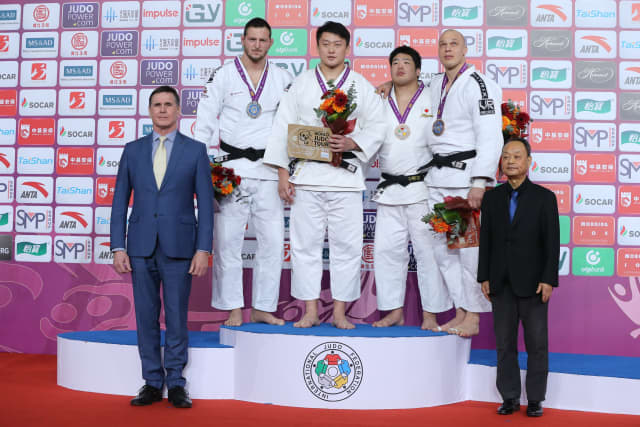