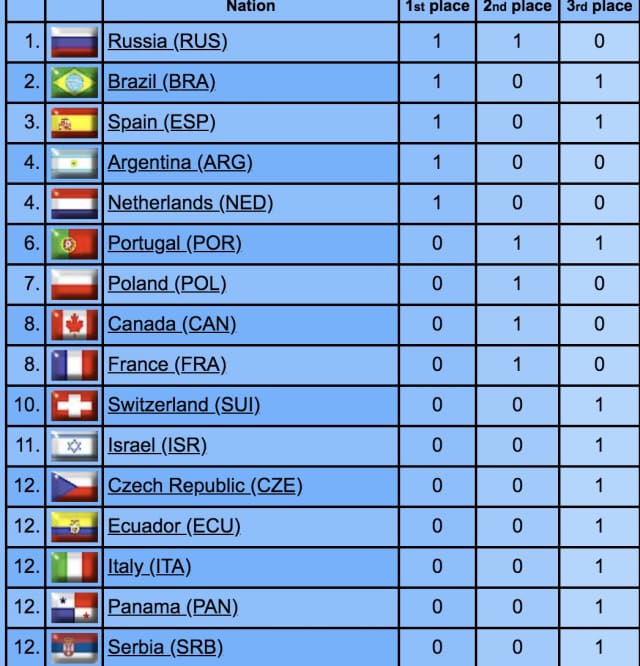 Rio 2016 Olympic champion and 2018 world bronze medallist Paula PARETO (ARG) won the first Cancun Grand Prix 2018 gold medal with victory in the lightest category of the competition on Friday evening. PARETO has just arrived from Buenos Aires where the veteran was an Athlete Role Model at her home Youth Olympic Games. PARETO, who won bronze at Beijing 2008 Olympics, showed the world how it’s done with a vintage display at -48kg to claim a third Grand Prix title. The former world champion comprehensively defeated Antalya Grand Prix gold medallist Catarina COSTA (POR) by two unanswered scores and continues to inspire her teammates and the next generation of judoka by her actions both on and off the mat. 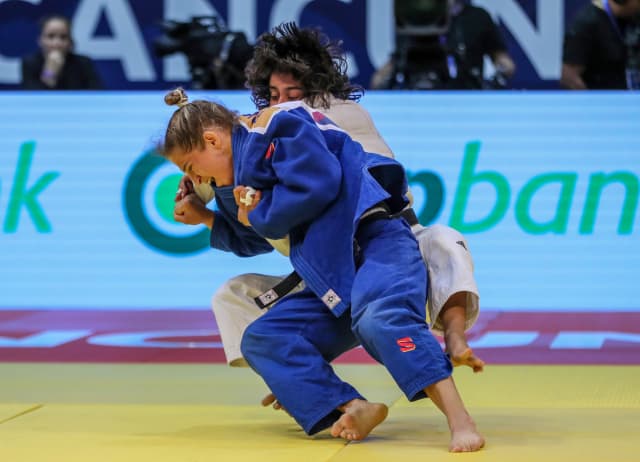 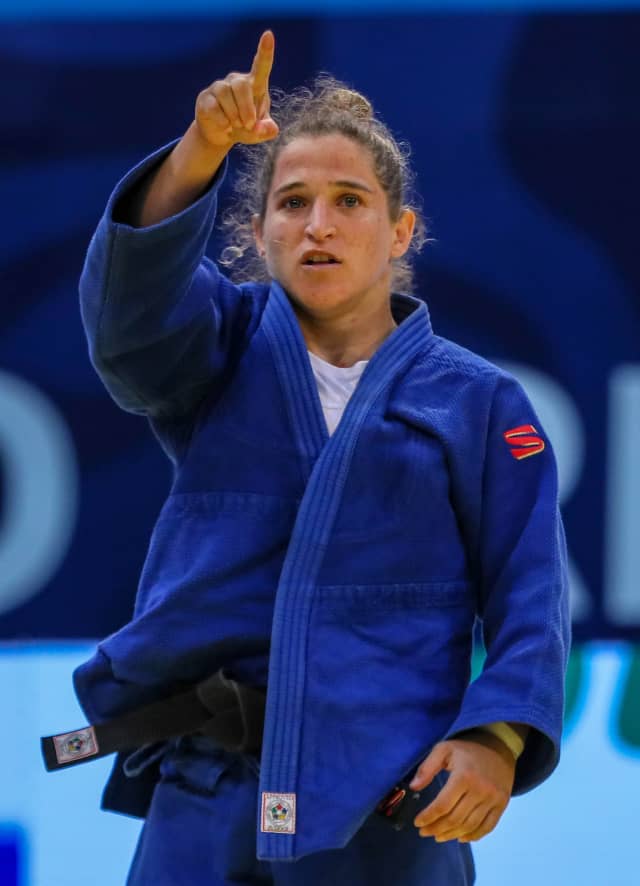 The first bronze medal contest was won by FIGUEROA who countered Ekaterinburg Grand Slam bronze medallist Katharina MENZ (GER) with ashi-waza in the opening contest of the final block. Germany’s world number 22 overstretched and the Spaniard’s leg was already inside as FIGUEROA turned and drove forward with an o-uchi-gari in golden score.

The second bronze medal was won by NIKOLIC who held down London 2012 Olympic champion Sarah MENEZES (BRA) for 20 seconds and ippon. Top seed NIKOLIC bounced back from her semi-final loss to overpower her Brazilian rival on the ground to win her sixth Grand Prix medal. 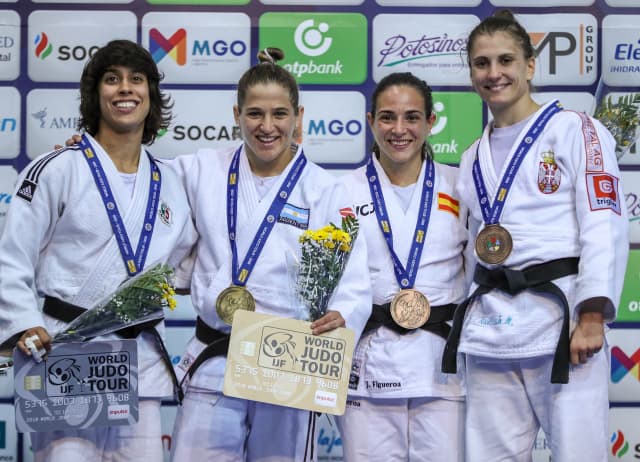 Hohhot Grand Prix bronze medallist Ana PEREZ BOX (ESP) was the shock winner of the -52kg gold medal as she defeated four-time Grand Prix medallist Agata PERENC (POL) in the final. PEREZ BOX won her first IJF final appearance at expense of Tashkent Grand Prix silver medallist PERENC by a waza-ari score to send her country to the top of the medal podium for the time being. 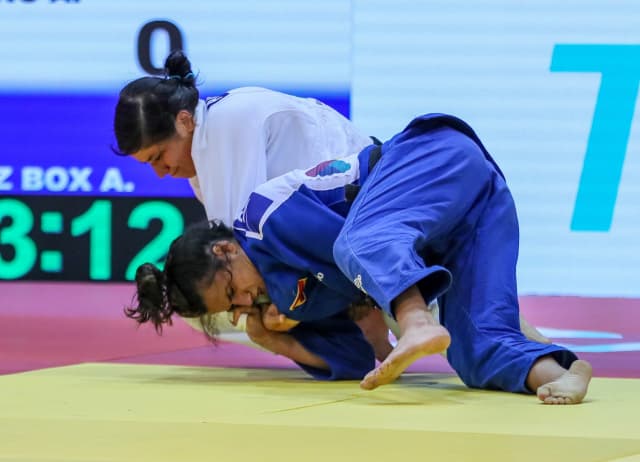 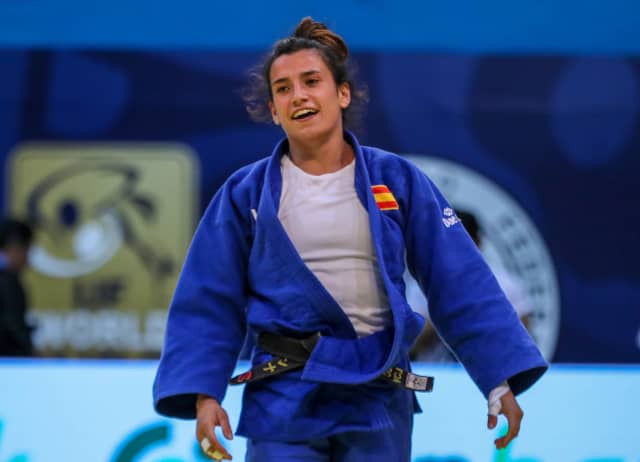 The first bronze medal was awarded to former Tyumen Grand Slam winner Joana RAMOS (POR) who used all of her experienced to beat PIENKOWSKA. RAMOS threw with a makikomi effort and held down her Polish rival for 10 seconds to seal her ninth Grand Prix medal and the second for Portugal on day one in Cancun.

The second bronze medal was won by European Championships bronze medallist Evelyne TSCHOPP (SUI). The world number 12 beat teammate and world number 61 KOCHER in golden score by a waza-ari score after one minute of added time. TSCHOPP led in regulation time by a waza-ari before KOCHER restored level terms and the more established Swiss judoka prevailed in golden score. 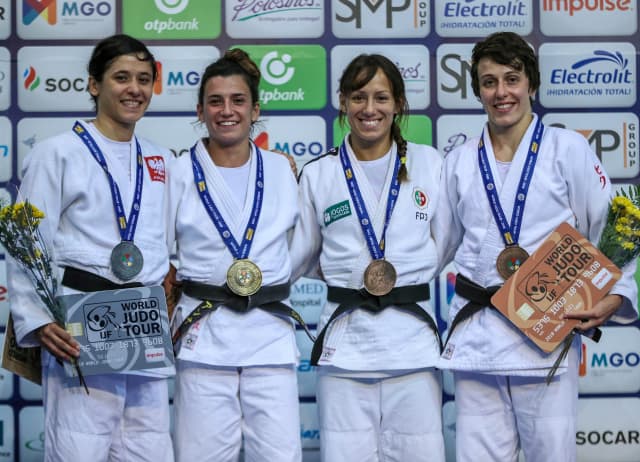 Olympic champion Rafaela SILVA (BRA) avenged her opening World Championships contest defeat at the hands of world number 10 Jessica KLIMKAIT (CAN) by beating her rival for gold in the -57kg final in Cancun. SILVA, who won the Budapest Grand Prix in August, won her fifth Grand Prix crown with an emphatic showing as she scored two times without reply and will now break back into the world’s top 10 while KLIMKAIT secured invaluable Tokyo 2020 qualification points and her domestic battle with Christa DEGUCHI (CAN) looks set to go right down to the wire. 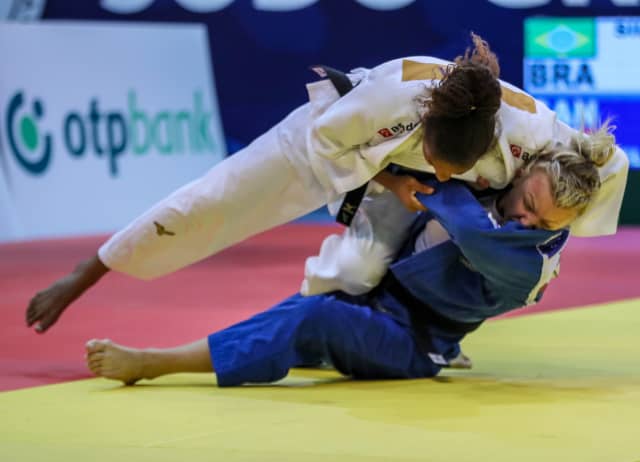 The first bronze medal was won by world number 12 Miryam ROPER (PAN) who utilised her highly-regarded ashi-waza to take down STEFAN after 64 seconds of golden score. ROPER produced her second waza-ari score of the contest in added time to strengthen her Tokyo 2020 quest with the 14th Grand Prix medal of her career.

The second bronze medal was won by Tbilisi Grand Prix bronze medallist Timna NELSON LEVY (ISR) who countered world number three SMYTHE-DAVIS for ippon. Britain’s seven-time Grand Prix medallist went ahead with a waza-ari from a o-soto-gari but was unsuccessful when she tried to repeat the technique as NELSON LEVY was braced for the attack and took control for the maximum score. 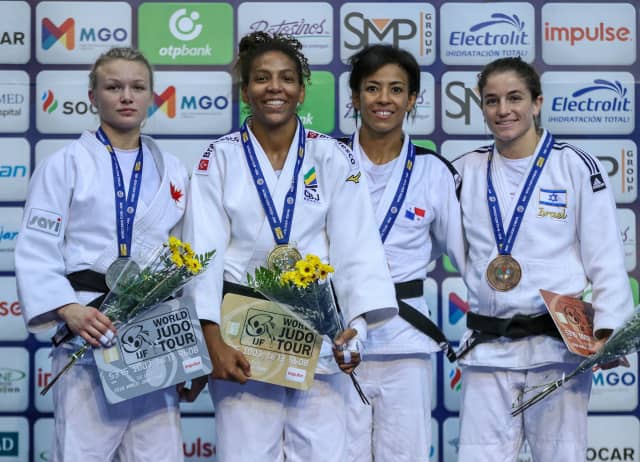 Former Junior European Championships gold medallist Tornike TSJAKADOEA (NED) defeated Minsk European Open silver medallist Luka MKHEIDZE (FRA) to win the -60kg title in Cancun. MKHEIDZE took the lead with a waza-ari score after 89 seconds before his rival fought back. Both judoka were in their first IJF World Judo Tour final and were guaranteed their first medals at this level but went all-out in search of gold. TSJAKADOEA scored ippon with 19 seconds left on the clock with his koshi-waza to give the Netherlands a dream start in Mexico. 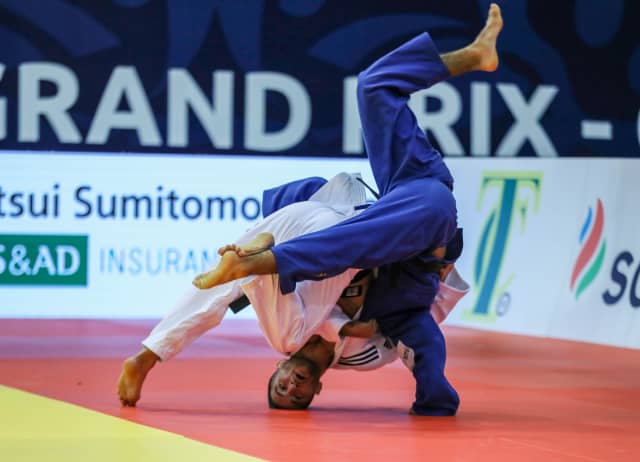 In the first semi-final TSJAKADOEA scored twice to defeat Pan American Championships gold medallist Lenin PRECIADO (ECU). In the second semi-final Zagreb Grand Prix bronze medallist David PULKRABEK fell to MKHEIDZE. The Czech judoka led by a waza-ari before MKHEIDZE restored parity with a tai-otoshi and then walked right onto a seoi-nage from the Frenchman who made sure of his first IJF medal. 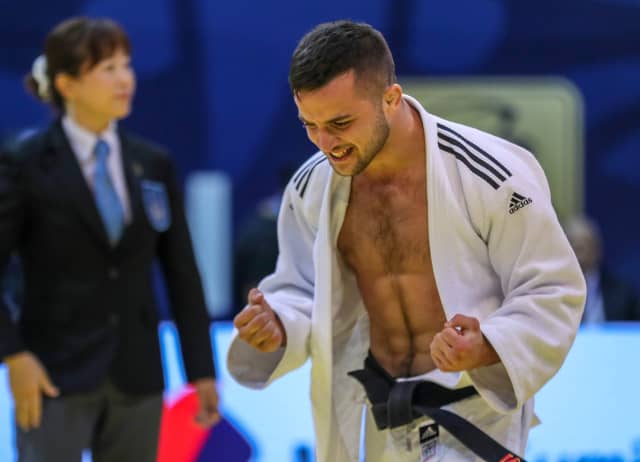 The first bronze medal was won by world number 35 PULKRABEK who ended a miserable day for number one seed Francisco GARRIGOS (ESP). The Czech judoka broke the balance of his opponent with a reverse seoi-nage and followed through for ippon and a key result towards his Tokyo 2020 Olympic qualification ambitions.

The second bronze medal went to PRECIADO who threw European champion Islam YASHUEV (RUS) for ippon with 54 seconds left on the clock. Ecuador’s world number 22 PRECIADO earned his first and his country's first IJF World Judo Tour medal to his immense satisfaction and to the delight of his coach and teammates with a sensational ippon as he come from being a waza-ari down to take the final spot on the -60kg podium. 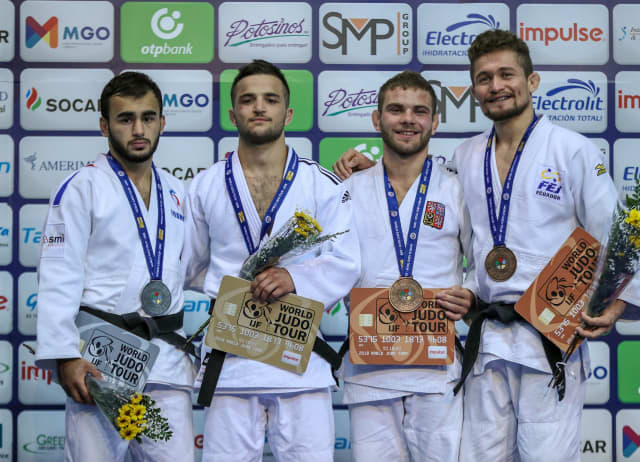 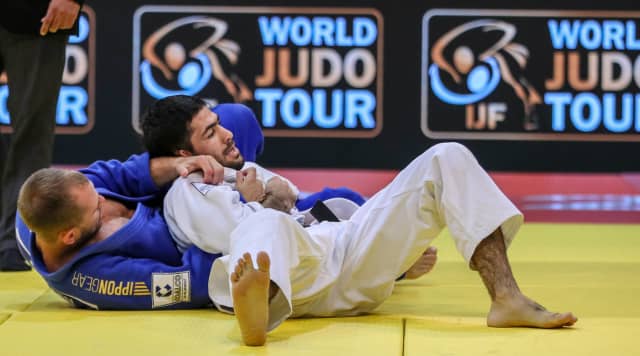 In the first semi-final Tbilisi Grand Prix silver medallist Daniel CARGNIN (BRA) was beaten to the final by GRIGORYAN in golden score by a waza-ari score. In the second semi-final PULIAEV benefited from an error-strewn display by two-time Grand Slam winner Charles CHIBANA (BRA) who was penalised three times to receive his marching orders.

The first bronze medal was won by CHIBANA who thwarted former European Championships bronze medallist Matej POLIAK (SVK). The Brazilian earned a much-needed boost by throwing for a waza-ari and pinning down his Slovakian opponent for 10 seconds to wrap up a dominant win. A third Grand Prix bronze medal for the Brazilian could reinvigorate his Tokyo 2020 push with the world number 17 under pressure in his bid for a second Olympics.

The second bronze medal went to former Almaty Grand Prix winner Elios MANZI (ITA) who outlasted number one seed CARGNIN in golden score. CARGNIN, who finished fifth at his first World Championships in Baku last month, was second best in added time as he was caught by the young Italian for a waza-ari score after three additional minutes. 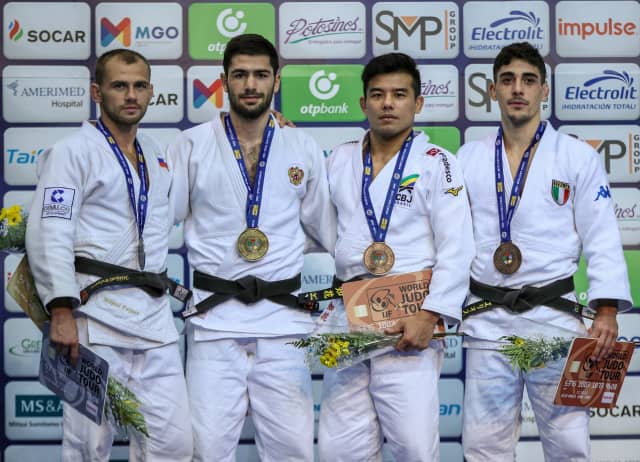 Refereeing
Education Above Everything

News
We Are Back!