Written by Nicolas Messner on 21. Jan 2018
Share
The third and final day of the Tunis Grand Prix 2018 in Tunisia has just been completed as the last five weight categories were in action today: women -78kg and +78kg and men -90kg, -100kg and +100kg. After three intense days, 24 countries won medals and a record of 12 nations won gold out of 14 weight categories. Stay tuned for more information and comments.

-90kg: Extraordinary technique for BOZBAYEV to grab the gold medal
The first men's final of the day was no surprise as top seed and 2014 world silver medallist TOTH Krisztian (HUN) was opposed to number two and Baku Grand Slam winner in 2017, Islam BOZBAYEV (KAZ). The first attack came from BOZBAYEV who applied a masterpiece of tai-otoshi, like the one you learn at the judo club for a perfect ippon. With a great deal of fairplay, TOTH congratulated him at the end of the contest. 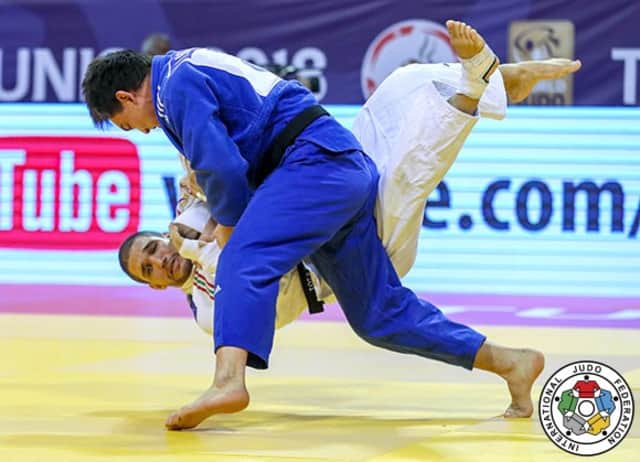 With thirteen medals won on the world judo tour, Noel VAN T END (NED) is a regular at major judo events. But after a mediocre year in 2017 (one bronze medal at the Grand Slam of Russia) he was in Tunis to relaunch what he expects to be a better season. For the bronze medal he was opposed to Frazer CHAMBERLAIN (GBR) who has so far only won medals at the continental level. Half way to the end, nothing was scored but VAN T END to his side when CHAMBERLAIN was penalized twice. But then the Dutch launched a aerial piece of sode-tsuri-komi-goshi for ippon, transformed into a waza-ari as the landing was not flat on the back. With thirty seconds left on the scoreboard, Noel VAN T END flipped over CHAMBERLAIN to catch him with an immobilisation for ippon. This was the eighth medal on a Grand Prix for VAN T END 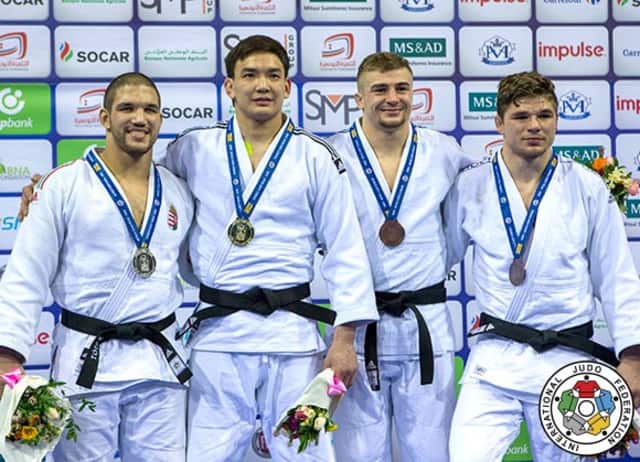 -78kg: Japan has its Gold Medal with IZUMI Mao
In the women's -78kg category, Karen STEVENSON (NED) who finished on the third step of the podium at the World Masters of Saint Petersburg at the end of the last season, faced IZUMI Mao (JPN), whose best result so far was a gold medal at the European Open in Sofia in 2017. After 30 seconds, STEVENSON was penalised with a first shido as she was totally dominated by the Japanese. During the following sequence, IZUMI attacked for no score, but in a pure Japanese style, used that attempt to follow on the floor with an immobilisation for ippon, winning her first Grand Prix gold medal and the the first gold medal for Japan at the Tunis Grand Prix. 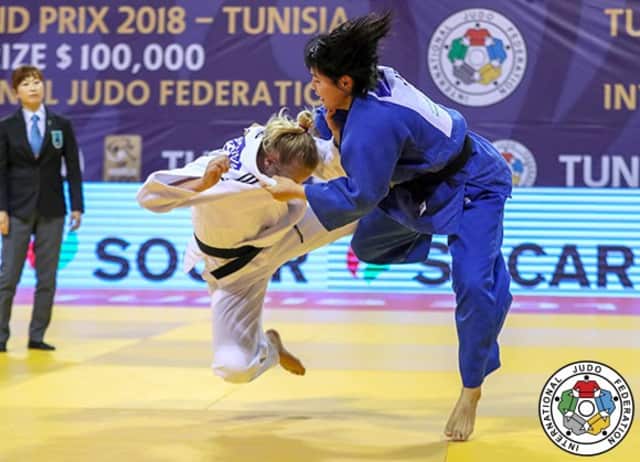 In this category, while France has two athletes in the top 10 in the world (Audrey Tcheumeo 5th and Madeleine MALONGA 7th) it was a young athlete who was engaged in the Grand Prix as Chlo DOLLIN, European Junior bronze medalist in 2017, was opposed to Niurguiana NIKIFOROVA (RUS), with no real reference at the international level. The Russian was quickly penalised for a false attack, which offered some extra-energy to the French, who was easily controlling her opponent. Half way to the end, she caught NIKIFOROVA on the floor and after having taken her leg out, she immobilized her for ippon. This is the first medal for Chlo DOLLIN at that level.

For second place on the podium, Tunisia hoped for Sarra MOUGOUI to open her medal count. Opposed to the Junior European Champion 2017, APOTEKAR, Klara (SLO), she had all the cards in hand to thrill the audience of the El Menzah Sports Palace. After 1:30 APOTEKAR was penalised with a shido for pushing down MOUGOUI, who was then also penalised for passivity. 47 seconds from the end the Tunisian was penalised again for a false attack and just five seconds to the end the last penalties were given, two for APOTEKAR, but three for MOUGOUI, synonymous of disqualification for her and bronze medal for APOTEKAR. 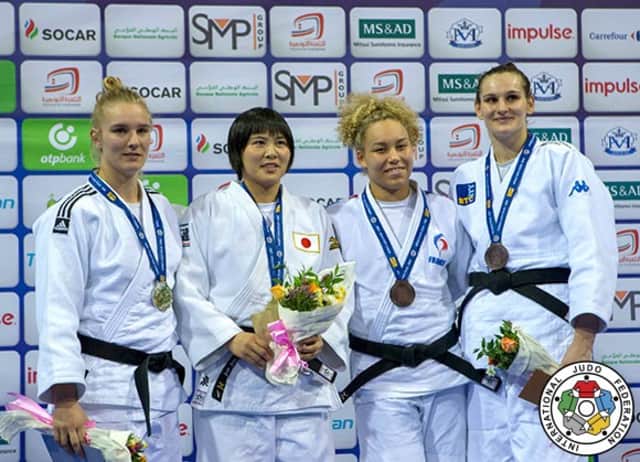 -100kg: FLETCHER Scores for Ireland
With a third place at the 2014 Junior World Championships, Ramazan MALSUIGENOV (RUS) was opposed to Benjamin FLETCHER (IRL), who used to defend the colours of Great Britain. Today competing for Ireland, the latter had the opportunity to register his name associated with his new country for the first time at a tournament on the world circuit. With this final, he was already assured of that. It remained to know what colour would be the medal. After 50 seconds, MALSUIGENOV received his first shido for passivity. It was then the turn of FLETCHER to be penalised also for passivity, followed almost immediately by a second penalty for cross-gripping. Just before the last minute, once again, MALSUIGENOV was awarded with his second penalty for passivity, as the match was going on a strange rhythm. As the four minutes of regular time was over, the first golden score of today's final block started. After 47 seconds, on the edge of the competition area, FLETCHER coud finally score with a powerful o-uchi-gari for waza-ari. This was the first gold medal for the new Irish athlete in a Grand Prix. 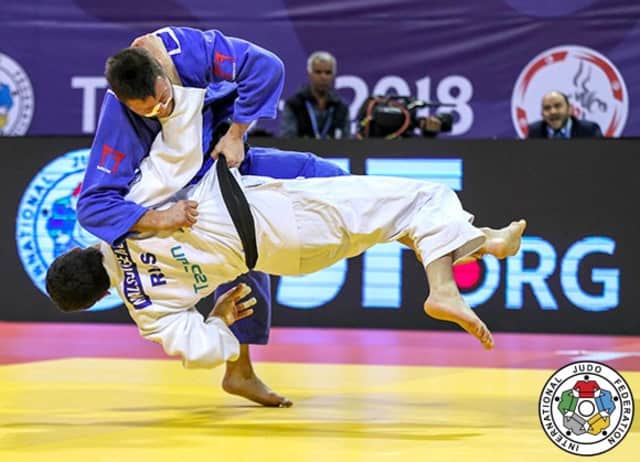 In the first final for the bronze medal, third in the Tashkent Grand Prix 2016, Viktor DEMYANENKO (KAZ) met the reigning African Champion, Lyes BOUYACOUB (ALG). The latter was quickly penalised for escaping but then seemed to take the advantage over his opponent. But with less than 40 seconds left he applied a sumi-gaeshi technique for a first waza-ari, score that he doubled a few seconds later with a kata-guruma to win the bronze medal.

For the second bronze medal the Brazilian Leonardo GONCALVES was opposed to Otto IMALA (SUI), holder of three bronze medals in continental cup. Half way to the end, the Swiss seemed to show some signs of exhaustion after a long competition day and was immediately thrown by GONCALVES for ippon. 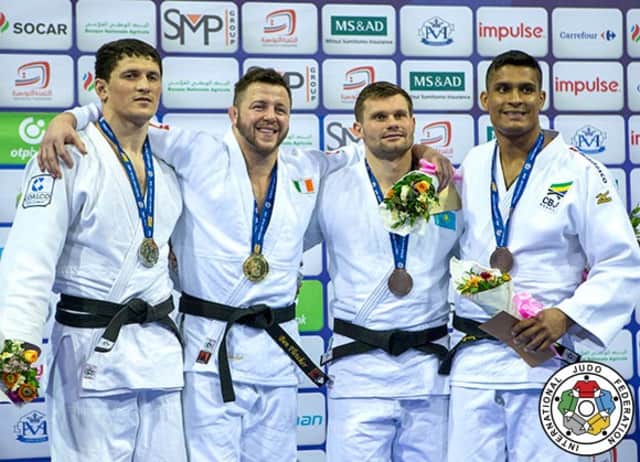 +78kg: SLUTSKAYA conludes with Gold in Tunis
The audience was expecting a lot from its champion, Nihel SHEIKH ROUHOU (TUN), who at each appearance on the tatami, caused a roar of joy from the spectators. Unfortunately eliminated by the Brazilian Beatriz SOUZA, Nihel had to settle for a place in the bronze medal final. It was therefore SOUZA who entered the final where she was opposed to Maryna SLUTSKAYA (BLR). After 1 minute and thirty seconds where both athletes were observing each other, SOUZA launched a first weak attack that was immediately countered by SLUTSKAYA for waza-ari. With less than a minute left SLUTSKAYA was penalised for blocking her opponent. As the Brazilian was in action but missed her attack, the Belarus immediately controlled her and followed with a submission (shine-waza) for ippon. 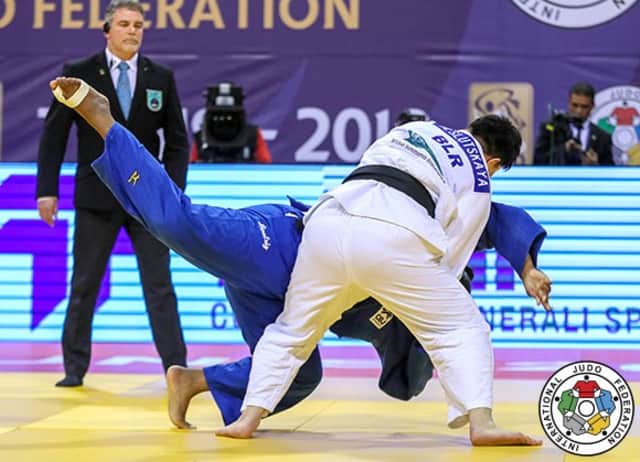 The first bronze medal saw two continental cup medalists, Galyna TARASOVA (UKR) and Anzhela GASPARIAN (RUS) competing for a place on the podium. After 55 seconds, TARASOVA received a first shido for passivity. Half way to the end, TARASOVA counterattacked GASPARIAN for a waza-ari taking a strong lead. The Ukrainian entered the last minute with a second shido for passivity, reducing her advantage to the minimum as the third shido would give the victory to the Russian, but with a precise left-handed drop-seoi-nage, she scored the second waza-ari that gave her the victory just ten second before the end. This was the firs Grand Prix medal for TARASOVA.

But it is undoubtedly the second bronze medal contest that attracted all the Tunisian fans in the Palais des Sport, as the recent bronze medalist of the open world championships, Nihel CHEIKH ROUHOU (TUN) met on the road to the podium, the bronze medalist of the last Olympic Games, Anamari VELENSEK (SLO). As the Tunisian entered the venue, the public suddenly woke up to encourage her. After two minutes and as the public was also asking for it, a first shido was logically given to the Slovenian, as she was less active that her opponent. With 1 minute and 11 seconds left the second penalty was announced for VELENSEK. But it was then Nihel's turn to be penalised. With 20 seconds left she finally scored a waza-ari that made the public explode with happiness. Nihel CHEIKH ROUHOU controlled the rest of the match to win her seventh medal in a Grand Prix, the first one for Tunisia this year and once again as she announced retirement after the Rio Olympic Games, the Tunisian hero is still fit and a good chance of medal for the country. 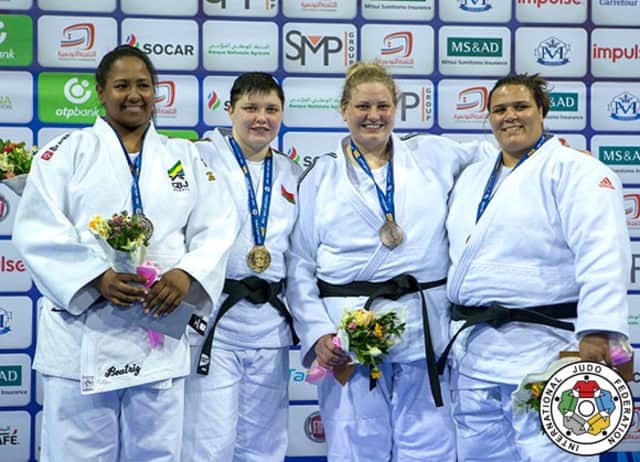 +100kg: Opportunist GORDIIENKO wins a beautiful second gold medal for Ukraine
For the last final of the day and of the tournament, the Tunisian public was expecting a lot from its local champion, Faicel JABALLAH (TUN), a former world championship bronze medallist. But the Tunisian giant was prematurely eliminated by the Japanese SATO Kazuya (JPN) and could not go through the repechages. In final the public watched Oleksandr GORDIIENKO (UKR) and MAHJOUB Javad (IRI) competing for gold. The first danger came from the Iranian side, as MAHJOUB almost caught GORDIIENKO with a surprising de-ashi-barai but for no score. He then caught him with an immobilisation but the gigantic Ukrainian could escape before ten seconds. Before the last minute, GORDIIENKO was penalised with the second shido for stepping out, but there was still no score despite the strong attacks from both sides. 32 seconds prior to the end, the Ukrainian launched maybe the last desperate attack which scored a waza-ari on the edge of the competition area. If the final result seems a little against the global physiognomy of the match, the victory is totally normal since GORDIIENKO was more opportunist and scored at the right moment. 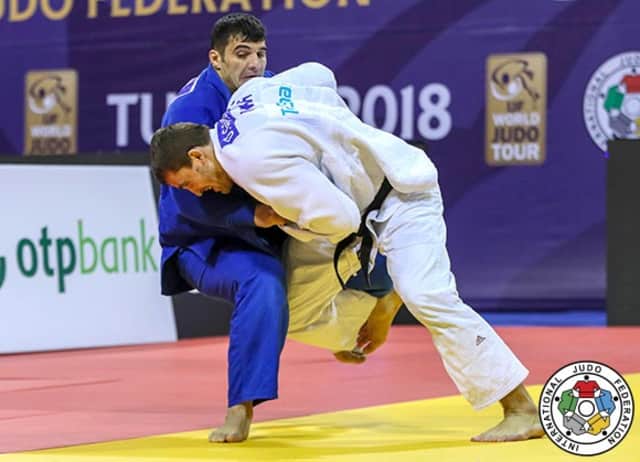 The first bronze medal contest saw 2016 Junior European Champion Ruslan SHAKHBAZOV (RUS) and two-times medallist of the Zagreb Grand Prix, Vladut SIMIONESCU (ROU) for a precious place on the podium. Half way to the end, both athletes had been penalised for passivity with a shido. With 43 seconds left, they both received a second shido and after a false attack SIMIONESCU received the third decisive penalty that gave the victory to the Russian and a first medal in a Grand Prix.

In the second bronze final, the second Russian Tamerlan BASHAEV (RUS) was opposed to JABALLAH's scorer, the Japanese SATO Kazuya (JPN). Both competitors finished the regular time just with shido to their names as BASHAEV was penalised once and SATO twice, but after 19 seconds of golden score, the Japanese was penalised a third time, giving the victory to BASHAEV for a first medal at that level.