The Road to Buenos Aires started in Tunis

24. Aug 2018
Share
From August 20 to 25, the International Judo Federation and the Tunisian Judo Federation hosted the Youth Training Camp in Tunis in order to prepare the Youth Olympic Games, which will take place in Buenos Aires, Argentina, from October 7-10, 2018. All athletes qualified and 1 coach per country, who had confirmed their participation 5 days prior to the camp were invited by the IJF to train for one week with Ilias Iliadis (GRE), three times World Champion and Olympic Champion, and Mark Huizinga (NED), Olympic Champion. 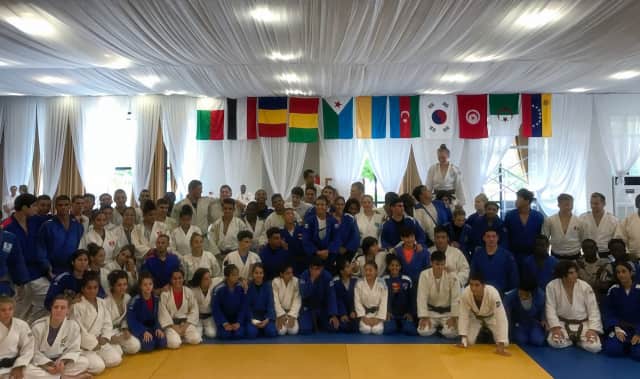 Mark Huizinga, who is also an active member of the IJF academy, explained how the camp was running: “The camp is underway now. I must say that everything is running smoothly. The accommodation is good. We have the dojo inside of the hotel where everybody stays, no time is lost in transportation. The participants walk from their room to the dojo. In between sessions, they can relax at the large swimming pool.

“We only have delegations of 1 coach + 1 or 2 athletes, since that is the maximum number of judoka's per country who will participate in the YOG. Thus, during this camp the coaches can have full attention for his/her athlete(s). It also means that about a third of the people present are coaches. Some are very experienced, some are younger upcoming coaches.

“The coaches are very eager for the experience that Ilias and I can offer to the group. They make videos and ask questions, so it is not only the athletes that want to learn. For me, it is nice to see coaches that I have also instructed during the IJF Academy courses throughout the world being present in Tunis. 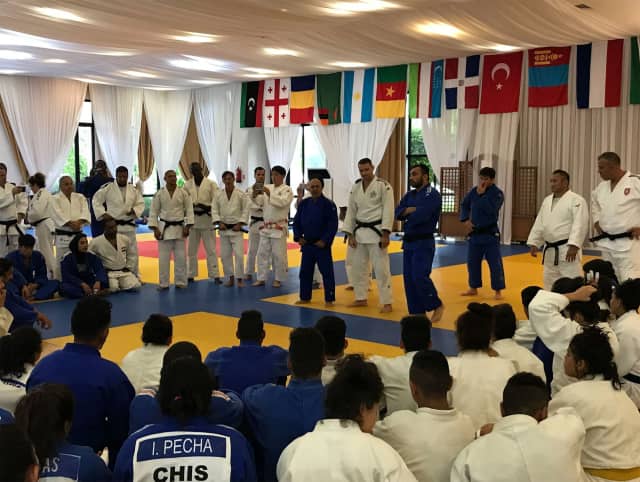 “For Ilias and I it is nice to cover the technical part of the sessions. We have different styles and backgrounds so together we can offer a good variety of information and contents to the group. Another advantage is that we are both fit enough to make quite some randori ourselves with the young athletes. So besides explaining and demonstrating, the athletes can feel how we move and fight. It gives extra spirit to the randori, especially with 'born warrior' Iliadis on the tatami.

“The athletes from this age group (15-18 years) don't have many opportunities to train for a week with so many different nationalities. Moreover, they get to know each other better, on and off the tatami. They will meet familiar faces when they arrive in Buenos Aires in October. Of course, they are training with their rivals for the Youth Olympic medals, but I told them that they are the next generation of world class judo players and that they should help each other to grow to the highest level. The spirit in the camp is friendly, but the randori are fierce, as they should be.

“There were two good evening sessions with anti-doping workshops, delivered by the IJF medical commission and Tunisian anti-doping agency. Very clear and informative.

“Two afternoons were reserved for rest and sightseeing. The local organizers took us to cultural and historical highlights around Tunis.“ 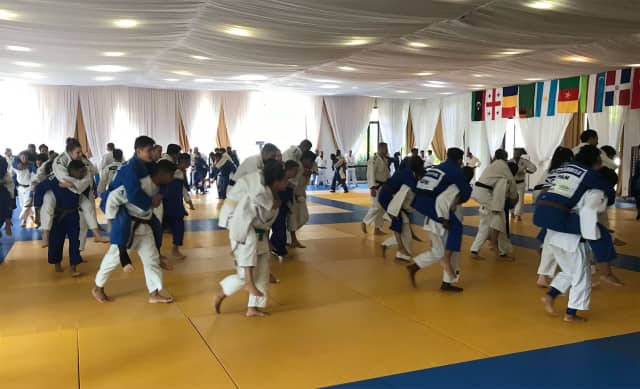 Anti-doping Education EMBER Andrea from the IJF Medical Commission who was present in Tunis explained: “The aim of the anti-doping workshop for the YOG athletes was, just like in 2014 before Nanjing, to familiarise the athlete with the process, as there always are YOG qualified athletes who have never been tested in their judo career due to their age.

“This time there was a separate demonstration for coaches, where they learnt how they can support their athletes during the doping control process. The topics covered in and out of competition testing, from notification to sample collection. The demonstration was multilingual, an officer from the Tunisian NADO was also present.

“Equipment for sample collection was presented, along with the administration procedure like what is on the Doping Control Form, what kind of questions can the athletes expect.

“During the session for the athletes the same topics were covered along with the part unique to them, the sample collection. They were educated on how the actual witnessing of urination is carried out. Athletes were asked to perform the use of the sample taking equipment, how much urine they need to produce with the help of some apple juice, and they were also familiarized with blood collection equipment. 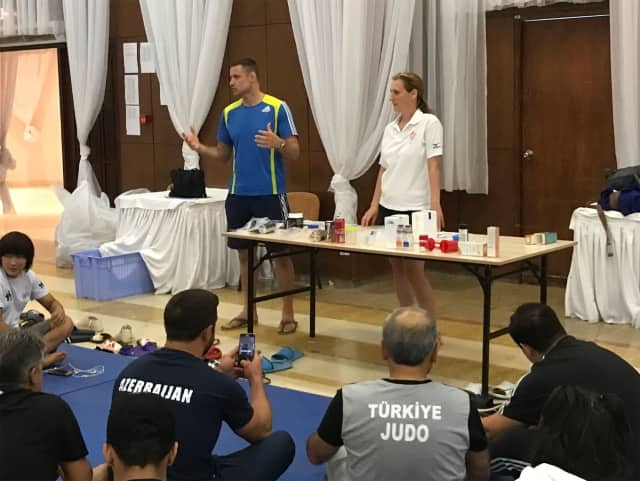 Session with the coaches

“At the end of the session 16 athletes who were never tested before were selected to go through the process for real. They represented roughly 15% of the athlete present, and the top athletes in their weight category (top 1 to 5). “There were many athletes who were tested prior to the camp, so with these tests we reached more than 50% test ratio until today and we expect more athletes to be tested during September.

“After one of the training sessions, athletes had the chance to also ask questions to Mark and Ilias. One of the questions was about how to make weight. Both of them emphasized that drastic methods can damage the body and over time it’s much better just to go one category higher.“ 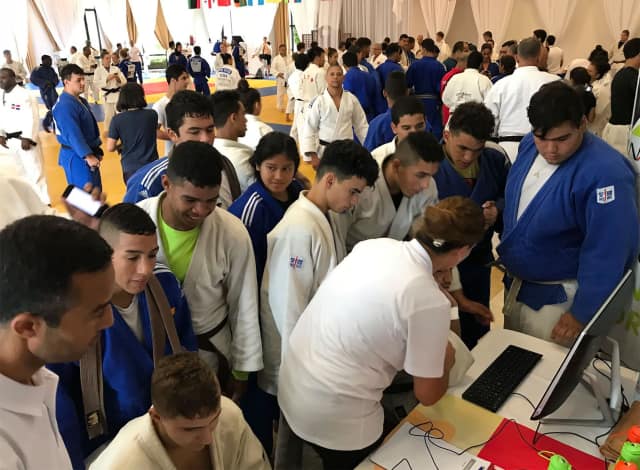 Quiz for the athletes

Ember Andrea then explain to the young athletes that judo is a clean sport but that they have to be careful: “When you come to the doping control station, that is the moment of truth. Don’t think that you are smarter than your body, it always tells us if you took something prohibited.”

She warned the athletes about the use of diuretics and made them aware that it is an anti-doping rule violation and can be “rewarded” by 2 years suspension. She then told them that the best way to make weight is to eat well. This was also emphasized by Mark and Ilias who gave details based on their own experience about proper nutrition for athletes.

Ilias Iliadis was very direct: ““When I hear that someone is taking vitamins or any kind of supplement, I think that they don’t believe in themselves. If you believe in yourself, you don’t need any chemicals.”

To what Mark added: “There are vitamin A, B, C but there is no vitamin uchi-komi. If you want to be good in judo, you have to train.“

Ilias concluded: “Mark and I were on the tatami for a long time because we never took anything but trained hard.“ They received a big applause.

At the end of this important information, the athletes and the coaches could also answer a computer quiz organized by education officers from the Tunisian NADO, who installed the WADA Outreach program. The computer quiz was translated in about 30 languages, giving the possibility to everyone to clearly understand the doping control process and general anti-doping rules.