Written by Nicolas Messner on 09. Oct 2018
Share
The third day of the Youth Olympic Games in Buenos Aires, Argentina, has just ended with the last two individual categories in women -78kg and men -100kg, the last two gold medals being won by Germany and Kazakhstan. 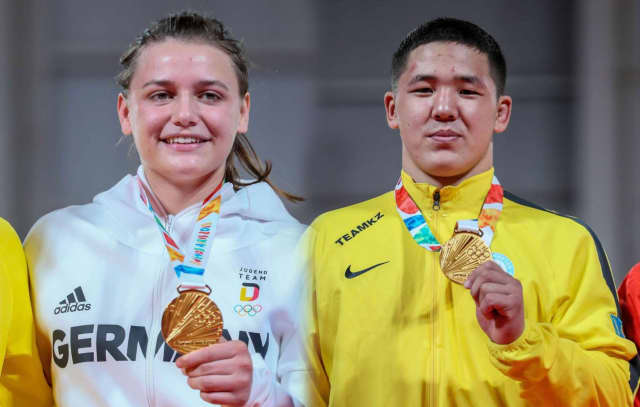 With 28 countries having stepped onto the podium, the distribution of medals is very impressive. If the statistics are extended to the countries present in the top seven of each category, this is 47 nations who performed in Buenos Aires, including all continents, showing the amazing popularity and universality of the sport. Two countries topped the medal table as Russia and Kazakhstan obtained one gold and one silver medal. In third place is Hungary, with two medals as well but one gold and one bronze. With two silver medals Mongolia finishes at the ninth position in the medal ranking as all the countries with only one gold medal have a better ranking, but once again that shows the value of the athletes from Mongolia. In total 8 countries won gold in the 8 weight categories that competed during the three-day individual event.

It is also important to notice that many countries which are not familiar with international podiums were particularly visible in Argentina and without any doubt, in the years to come, it will be fantastic to follow those athletes who revealed the power of judo everywhere on the planet. 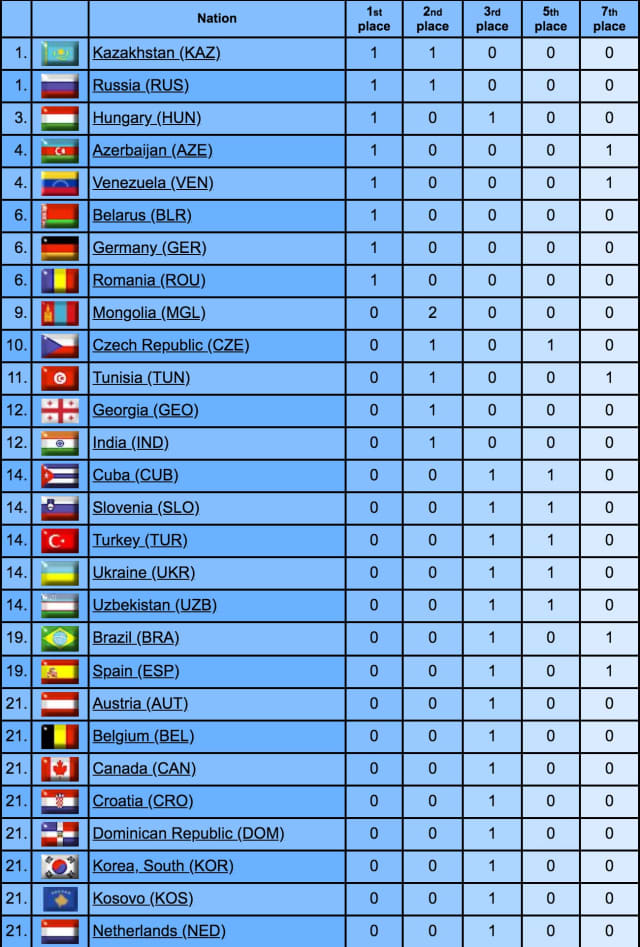 The last day of the tournament will be dedicated to the mixed team event. Invented in 2010 in Singapore on the occasion of the first edition of the Youth Olympic Games, the team event is very attractive and spectacular as each team (13 in total) is composed of men and women, medallists and non medallists and athletes coming from different countries. This specific format is incredible to watch as judoka from different origins and backgrounds have to team up together to perform in order to get an Olympic medal.

For that special purpose, the teams are named after the Olympic cities who hosted Olympic Games in the past either it was for senior or for cadets.

A special thank you must be addressed to the public, composed of hundreds of judo fans and children coming from the schools of Buenos Aires and which was absolutely amazing throughout the individual competitions. 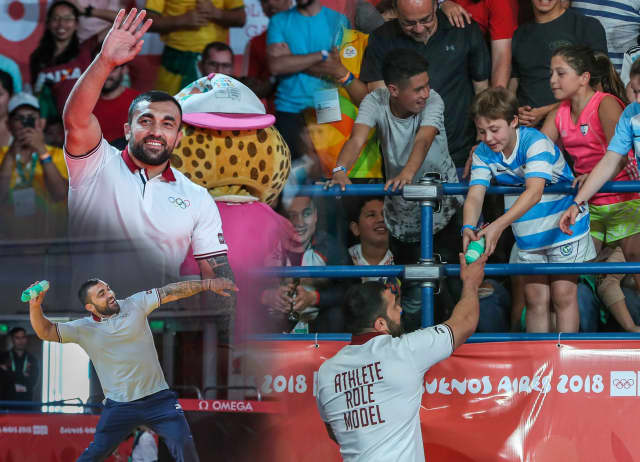 Women's -78kg In the first final of the day, Margarita GRITSENKO (KAZ) faced Raffaela IGL (GER). The first minute was a festival of attacks from both sides, although none was able to score a single point. The match quickly gave the feeling that it would not go to the term. Less than thirty seconds later, the German was penalized with a first shido for passivity though, while the unsuccessful attacks continued, the two athletes showing a foolproof flexibility to escape from perilous situations. It was finally IGL who scored a first waza-ari on a conterattack to take the lead in the final. With less than a minute on the clock, IGL was controlling GRITSENKO, when she was in position to carry one final attack for ippon and a first gold medal for Germany at this Olympic tournament. 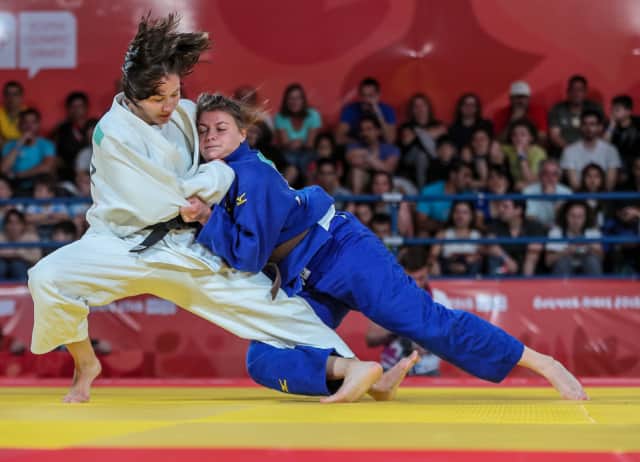 The first bronze medal contest of the day opposed Edith ORTIZ (ECU) and Eduarda ROSA (BRA). For more than a minute and a half, the two athletes neutralized each other before ORTIZ immobilized her opponent but not long enough to score. A few seconds later an identical situation arose, but with the same result. Less active than the Ecuadorian, ROSA was penalized twice, while the last minute was looming. It was Ortiz's turn to get a penalty too. But while the final gong was about to echo and the two athletes were about to enter the golden score, Edith ORTIZ was disqualified for applying a dangerous technique, offering the bronze medal to Eduarda ROSA.

In a 100% European match, Metka LOBNIK (SLO) was opposed to Ester SVOBODOVA (CZE) for the second bronze medal in the category. It was not until the last minute that the scoreboard was filled with a first penalty given to SVOBODOVA. Nothing significant to prevent the golden score between the two young women. But after twenty seconds, during a groundwork session, LOBNIK managed to grab her opponent with an immobilize to score ippon. 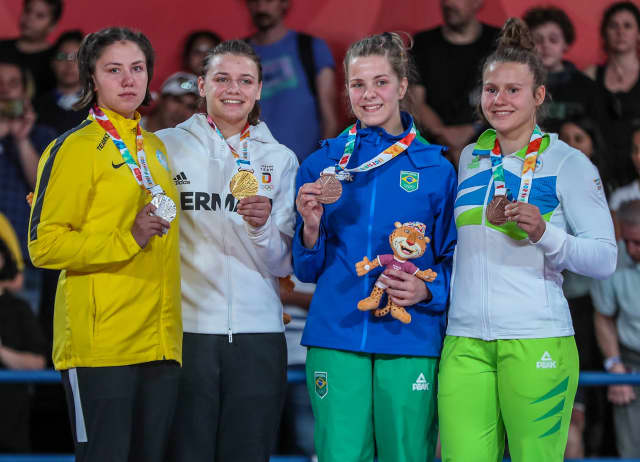 Men's -100kg The second and last final of the day saw Bekarys SADUAKAS (KAZ) facing Ilia SULAMANIDZE (GEO) in a match of strong men. Blocking any attempt to score during the regular time, the two finalists received two penalties each. As they could not take the risk to be penalized again, they fought a fierce battle for more than two minutes in the golden score before SADUAKAS finally managed to score the liberating waza-ari to win the gold. 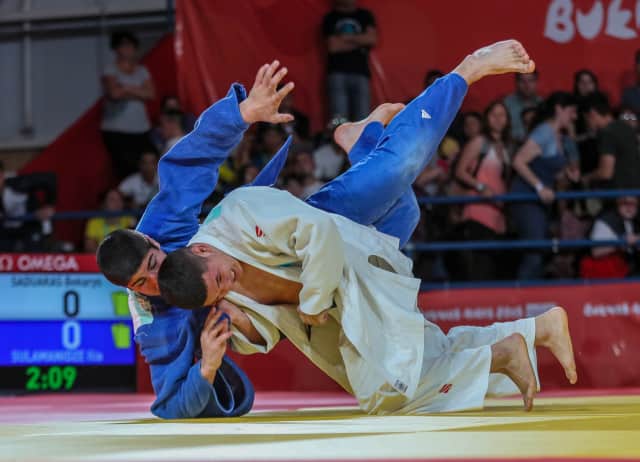 In less that a minute, Alin BAGRIN (MDA) scored a first waza-ari against Omer AYDIN (TUR) to take a strong lead but he didn't pay attention on the ground and AYDIN did not miss the opportunity to flatten his shoulders to immobilize him for twenty seconds for ippon, offering a bronze medal to Turkey.

In the second bronze medal match, the match seemed pretty balanced when Hungarian, VEG Zsombor overthrew his Slovenian opponent Rok POGOREVC (SLO) to seize him in immobilisation. In spite of everything POGOREVC succeeds in capturing the leg of VEG putting an end to the immobilization. A leg out later, VEG was nevertheless able to take full control again to finally score ippon. 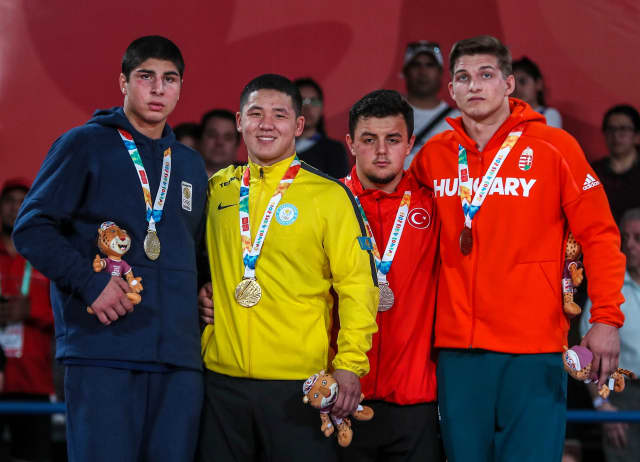