Two-time Grand Slam winner Julia FIGUEROA (ESP) struck Grand Prix gold for the first time as she defeated former European Championships bronze medallist Monica UNGUREANU (ROU) in the closing seconds with a waza-ari score. Cancun Grand Prix bronze medallist FIGUEROA screamed with pleasure after a key win against an opponent with who she has struggled to overcome in their head-to-head series which now sits at 4:3 in the favour of the Romanian. 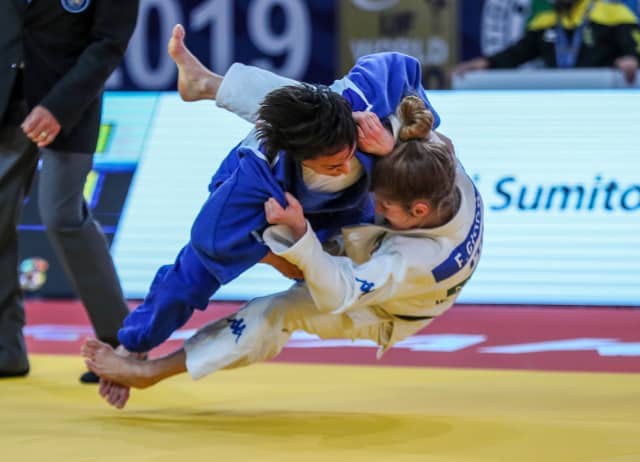 In the first semi-final former Madrid European Open winner Francesca GIORDA fell to FIGUEROA by ippon in golden score. In the second semi-final UNGUREANU defeated Tbilisi Grand Prix bronze medallist Melanie CLEMENT (FRA) who received her marching orders after gripping on one side for too long without attacking in golden score which was her third shido. 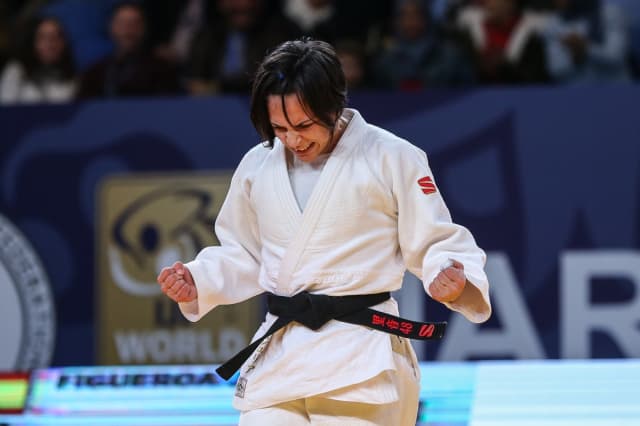 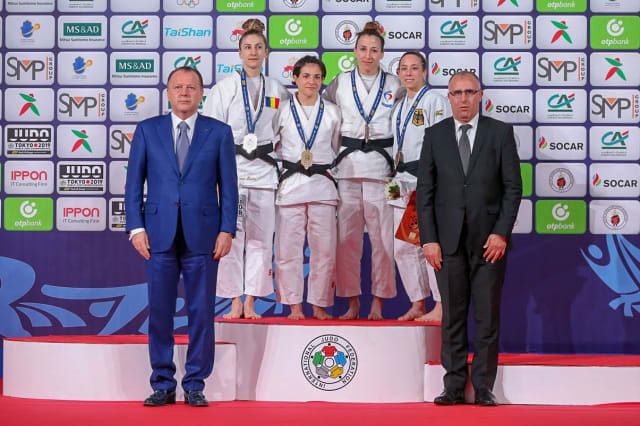 World number one Amandine BUCHARD NORDMEYER (FRA) lived up to her ranking with victory in the -52kg category. The French star conquered Tashkent Grand Prix bronze medallist Ana PEREZ BOX (ESP) to clinch her fifth Grand Prix gold medal and to extend her advantage at the top of the weight category. PEREZ BOX, who was bidding for a second Grand Prix triumph, was powerless to resist a dynamic modified kata-guruma from BUCHARD NORDMEYER which resulted in ippon. 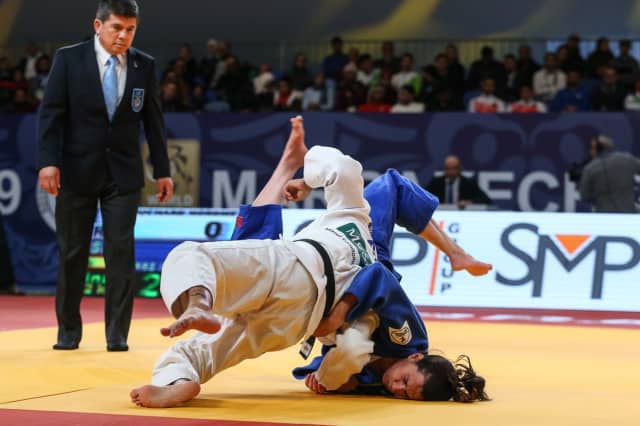 In the first semi-final BUCHARD NORDMEYER beat PRIMO by the maximum score to reach the final without breaking sweat. In the second semi-final former Düsseldorf Grand Slam bronze medallist Estrella LOPEZ SHERIFF lost out to teammate PEREZ BOX by ippon. 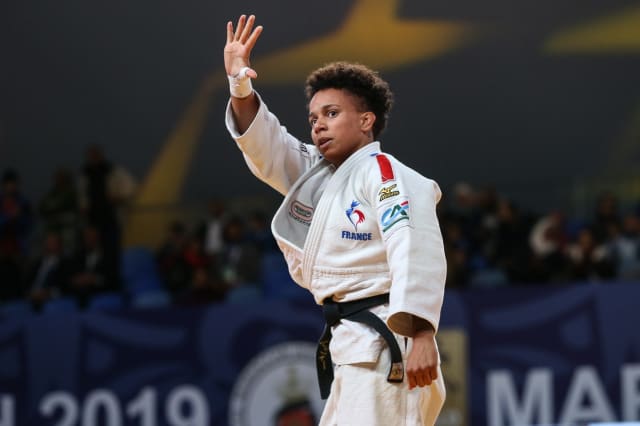 The first bronze medal was awarded to LOPEZ SHERIFF who saw off Rio 2016 Olympian Taciana CESAR (GBS) by ippon from a sasae-tsurikomi-ashi as Spain won 50% of the -52kg medals.

The second bronze medal was won by PRIMO who floored Glasgow European Open silver medallist Nathalie ROUVIERE (GER) with an o-soto-gari to win by the maximum score. 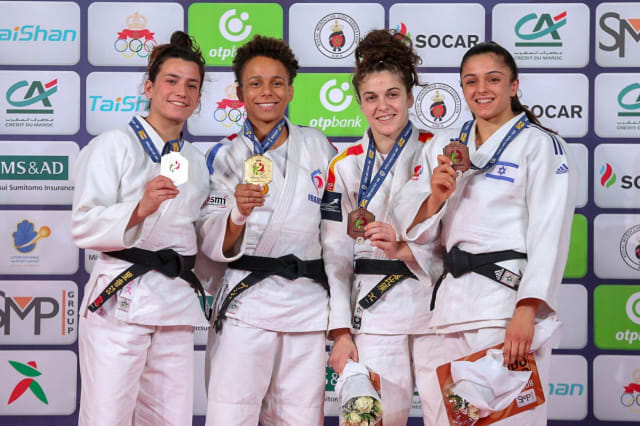 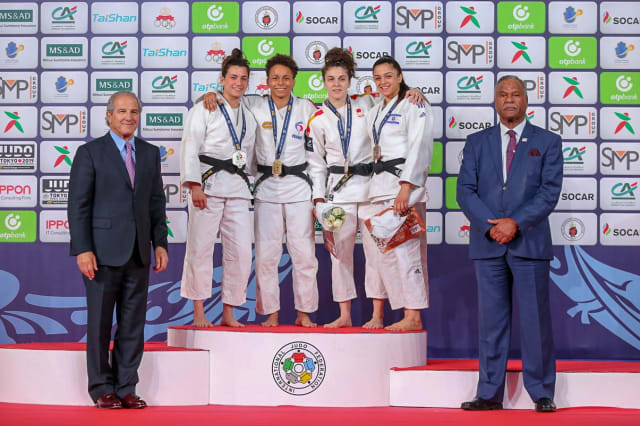 Former Baku Grand Slam winner LIEN Chen-Ling (TPE) celebrated her second Grand Prix win at the expense of Oberwart European Open winner Anna BOROWSKA (POL) who was subdued in the -57kg final. Tokyo-based LIEN, who was a key training partner for the recently retired London 2012 Olympic champion MATSUMOTO Kaori (JPN), earned her first IJF gold medal since her 2017 triumph at the Baku Grand Slam to step up her bid for honours at the World Championships in Tokyo in August and next year in the same city at the Olympics. The world-class Chinese Taipei judoka eventually pinned down BOROWSKA with a ushiro-kesa-gatame and after 17 seconds her Polish adversary elected to tap out. 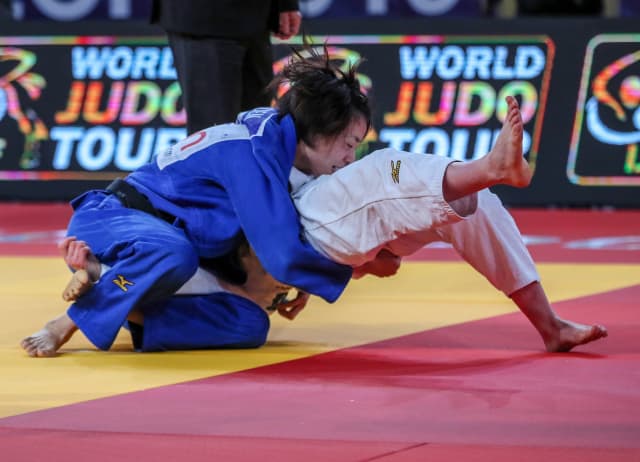 In the first semi-final Sofia European Open winner Sappho COBAN (GER) narrowly lost out to Anna BOROWSKA (POL) by a waza-ari score. In the second semi-final LIEN threw London 2012 Olympic bronze medallist Automne PAVIA (FRA) with an uchi-mata for a waza-ari score and then pinned down the French star with a sankaku-gatame to progress to the final. 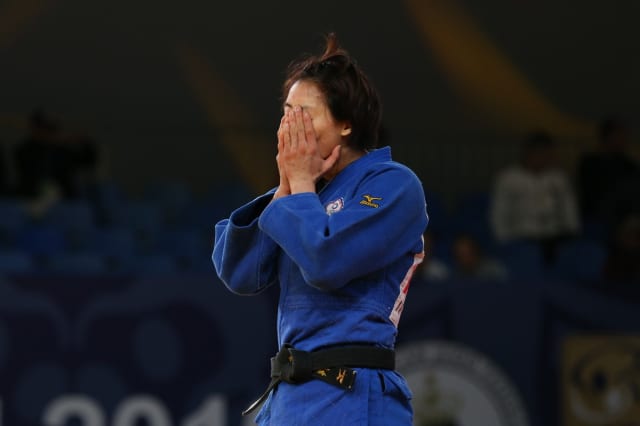 The first bronze medal was won by Tel Aviv Grand Prix winner Timna NELSON LEVY (ISR) who came from behind to defeat PAVIA by ippon. NELSON LEVY dispatched her French foe with a ko-soto-gake for ippon as the latter was caught flat-footed with 18 seconds left on the clock.

The second bronze medal was won by 2009 world bronze medallist KARAKAS Hedvig (HUN) who outfought and outscored COBAN who finished fifth. Hungary’s veteran scored with a tani-otoshi for a waza-ari and added a second from a sumi-gaeshi for a comprehensive win in the penultimate contest on the opening day in Marrakech. 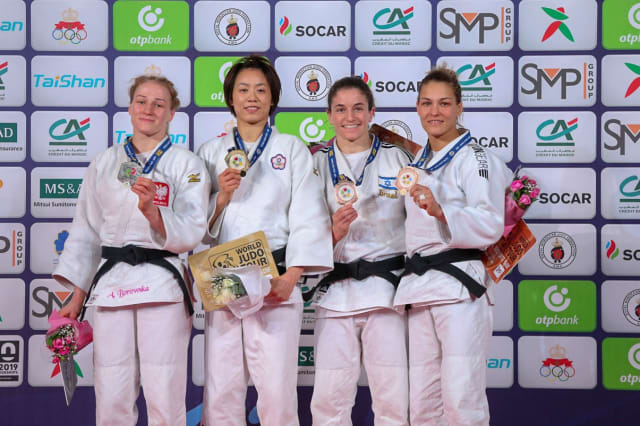 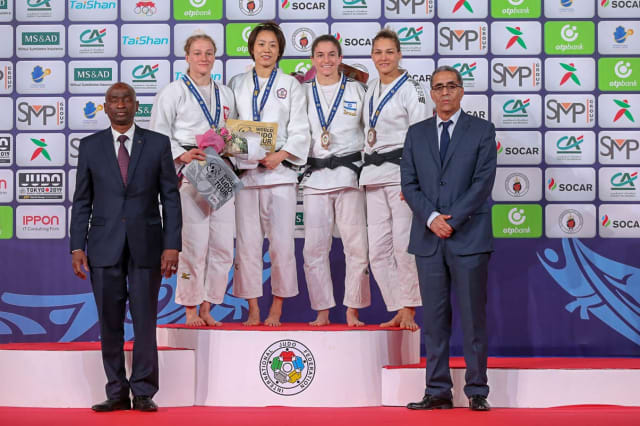 Six-time Grand Slam medallist Sharafuddin LUTFILLAEV (UZB) defeated world number 38 Artem LESIUK (UKR) to win Grand Prix gold on day one in Marrakech. First-time IJF finalist LESIUK forced the contest into golden score and his Uzbek rival surged into action with a huge koshi-guruma for a waza-ari score to hand him his twelfth Grand Prix medal and fourth of the golden variety. 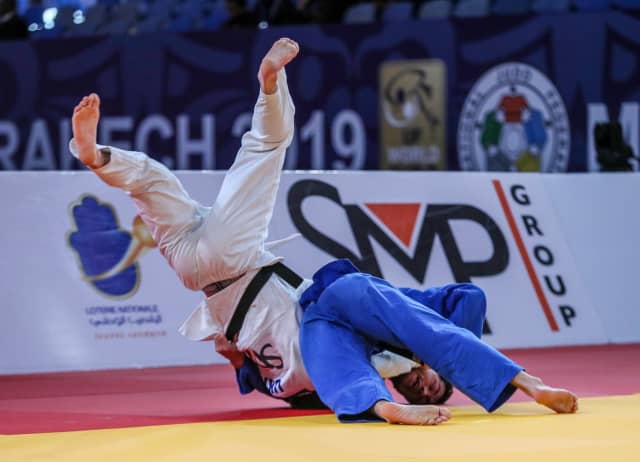 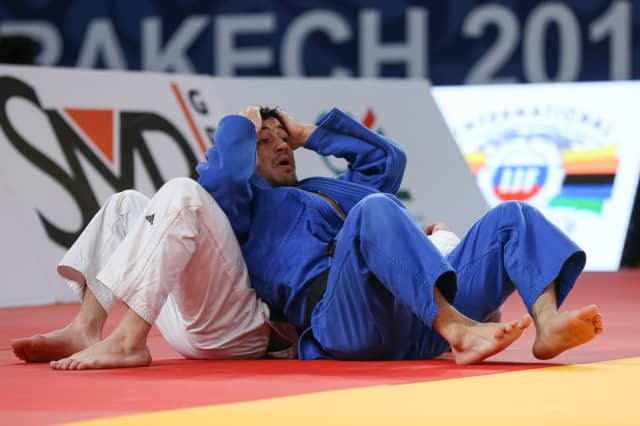 The first bronze medal was won by number one seed Amiran PAPINASHVILI (GEO) who beat a desperately disappointed MCKENZIE by two scores inside three minutes to register Georgia in the medal table on day one. 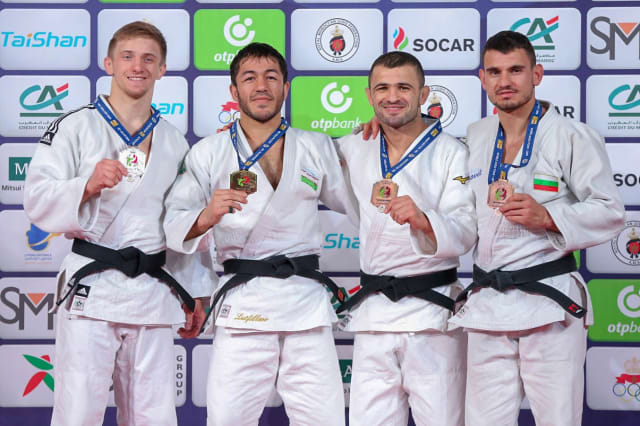 -66kg: Uzbekistan’s men double up with golden start in Morocco 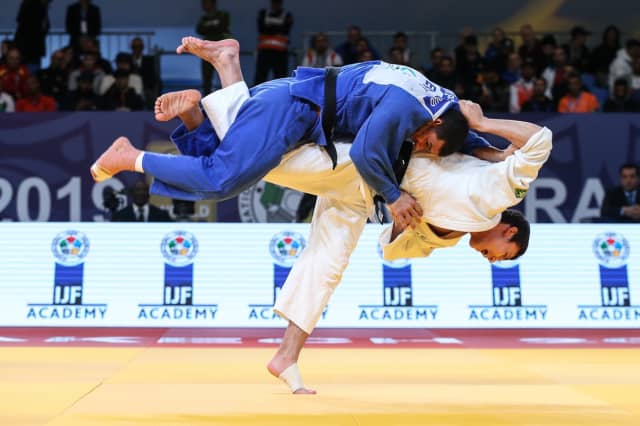 In the first semi-final Olympic champion Beslan MUDRANOV (RUS) was unable to take part due to a knee injury which meant that NURILLAEV advanced to the final. In the second semi-final world silver medallist Yerlan SERIKZHANOV (KAZ) was shocked by ABDELMAWGOUD who countered the Kazakh for ippon.

The first bronze medal was won by SERIKZHANOV after Tashkent Grand Prix bronze medallist Shakhram AKHADOV (UZB) picked up his third shido and was disqualified.

The second bronze medal went to Sebastian SEIDL (GER) who was due to face MUDRANOV but the Russian had already withdrawn before the semi-final stage. 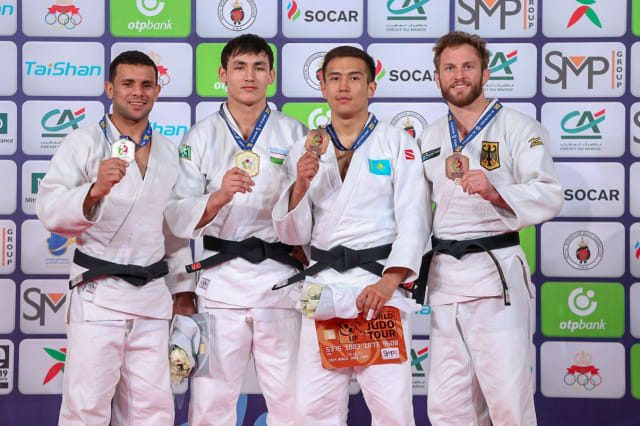 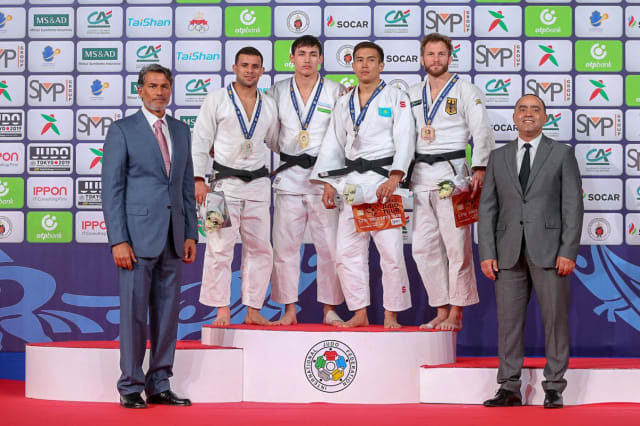