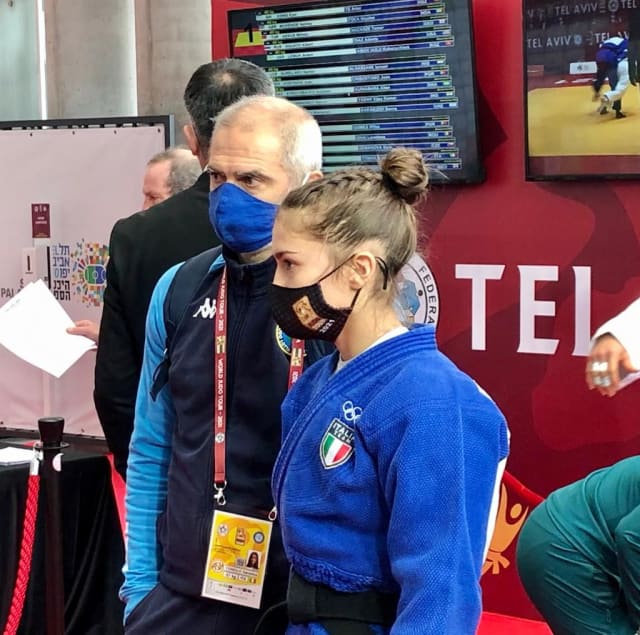 The young Italian is on a trajectory of brilliant progression. World champion in the cadet category and bronze medalist in the European Junior Championships, she is part of the Italian squad present in Tel Aviv. We should notice some things, though: at 17 years old, without the right to vote or drive, Veronica is participating in her first grand slam, along with the best in Italy and in the world.

She made her big debut, defeating the Angolan, Diassonema Mucungui. That is already part of the statistics. In the second round the Hungarian Hedvig Karakas was waiting, much more experienced, winner of numerous tournaments and present in the top ten in the world ranking for years. In other words,  it is a good example of what it means to change dimension.

Karakas won by osae-komi, but injured the young Italian at the elbow. The scene raised our interest because it was a mixture of contradictory sensations. Toniolo was lying on the ground while the competition continued and the next judoka passed by her, concentrated before fighting, as if she were collateral damage; like the cyclists who fall in the middle of the race while the rest disappear at full speed in search of a stage victory. All of that is also part of sport. However, those athletes who did not compete on the first day and who attended the tournament from the stands were aware of her. Finally, the most interesting detail was the reaction of Raffaele Toniolo, because in addition to being her coach, he is also her father.

“It is very difficult because, naturally, I suffer when I see my daughter get hurt, but at the same time, I analyse the facts as a coach and, in this case, she did wrong because when Karakas had her immobilised and Veronica couldn't do anything, she shouldn't have tried to force her arm to avoid the pain."

Fortunately and after consulting the doctor, we find out that the injury is not serious. We didn't want to ask Veronica for her impressions because she was having a pretty bad day. Instead, what we are sure of is that she will not make the same mistake again. Now she knows what it means to compete at the highest level, even if it was a painful lesson.

See also
JUDO FOR PEACE
Beyond Fear, Without a Parachute

Story
In The Heart Of Paris

Interview
"Heroic Is The First Word"