By Mark Pickering on 22. Nov 2019
Share
Japan prove to be untouchable at home

Former world champion TONAKI Funa (JPN) defeated Marrakech Grand Prix winner Julia FIGUEROA (ESP) with a professional performance as she scored twice without reply to increase her advantage over the chasing pack in Japan. World number two TONAKI illustrated once again that she is her country’s best judoka in judo’s lightest weight category and is now within touching distance of selection for her first Olympic Games. FIGUEROA earned an unexpected silver medal for Spain who were a major force on the opening day in Osaka. 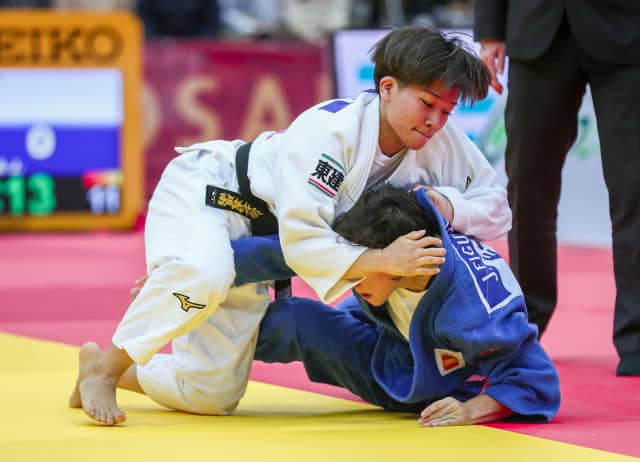 In the first semi-final TONAKI defeated former world champion KONDO Ami (JPN) after seven minutes of golden score. Japanese number one TONAKI gradually outworked her teammate and it was KONDO who picked up her third and final shido for passivity to send the former into the final. 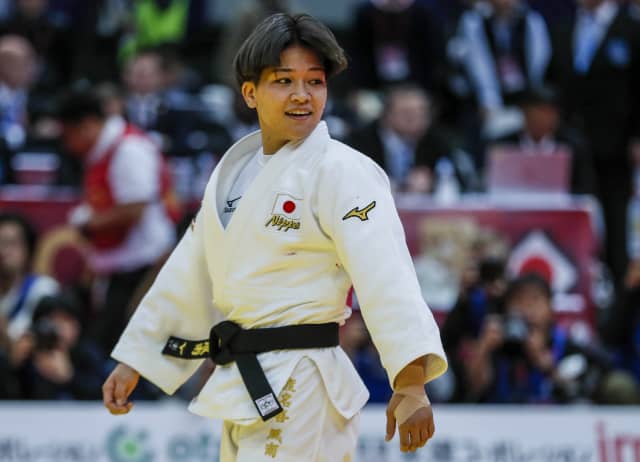 In the second semi-final former world silver medallist TSUNODA Natsumi (JPN) fell to FIGUEROA after 65 seconds of golden score by a waza-ari score. TSUNODA was making her debut at -48kg on the IJF circuit with the aim of establishing herself as a late contender for Tokyo 2020 but the Spaniard did not read the script and impressively defeated the -48kg newcomer to move into the final.

The first bronze medal contest was won by TSUNODA against 20-year-old Grand Slam debutant Mireia LAPUERTA COMAS (ESP). TSUNODA medalled in the -48kg category at her first attempt on the IJF World Judo Tour but there was no celebration by the Japanese who needed to win gold to have any chance of Olympic selection at her new weight. LAPUERTA COMAS was thrown twice but will be pleased with her day’s work and a fifth-place in the sport’s homeland.

The second bronze medal was won by Junior World Championships gold medallist KOGA Wakana (JPN) who threw KONDO with a uchi-mata for a waza-ari score and the former world champion elected to submit after landing awkwardly. 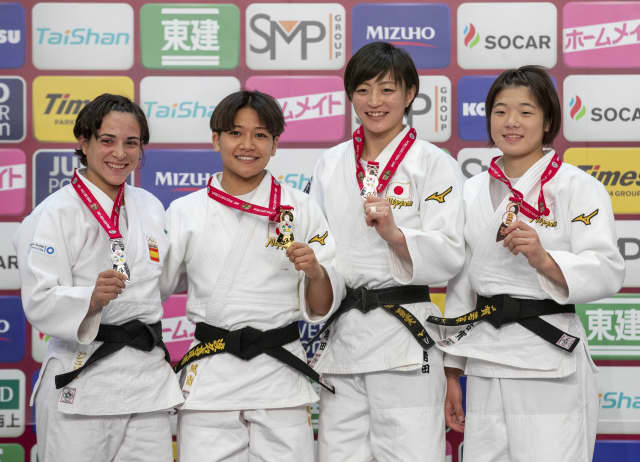 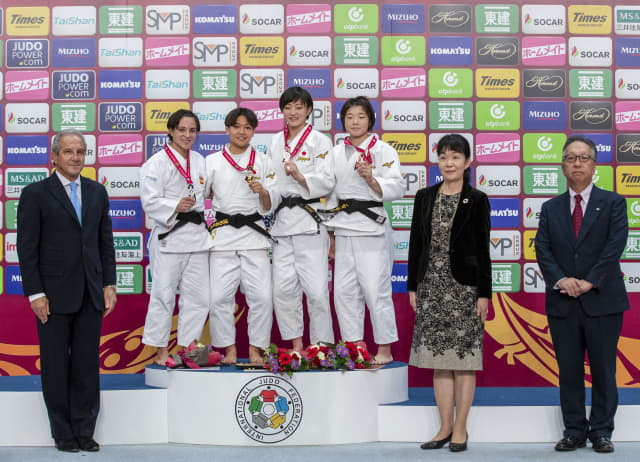 World number one Amandine BUCHARD (FRA) handed world champion ABE Uta (JPN) her first loss on the IJF World Judo Tour since her debut event in 2016. Three-time Grand Slam winner ABE had won all 48 of her contests since then but conceded her three-year winning-streak in added time. The 19-year-old was thrown after four minutes of golden score by the plucky Frenchwoman with a modified kata-guruma for a waza-ari score. 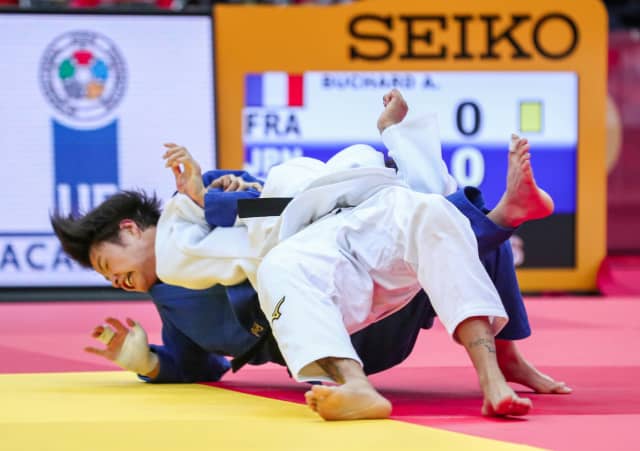 ABE Uta, who was due to be selected today for Tokyo 2020 if she won gold, left the field of play in tears just minutes after her brother had kept his Olympic ambitions alive after winning gold in an absorbing turn of events in Osaka. 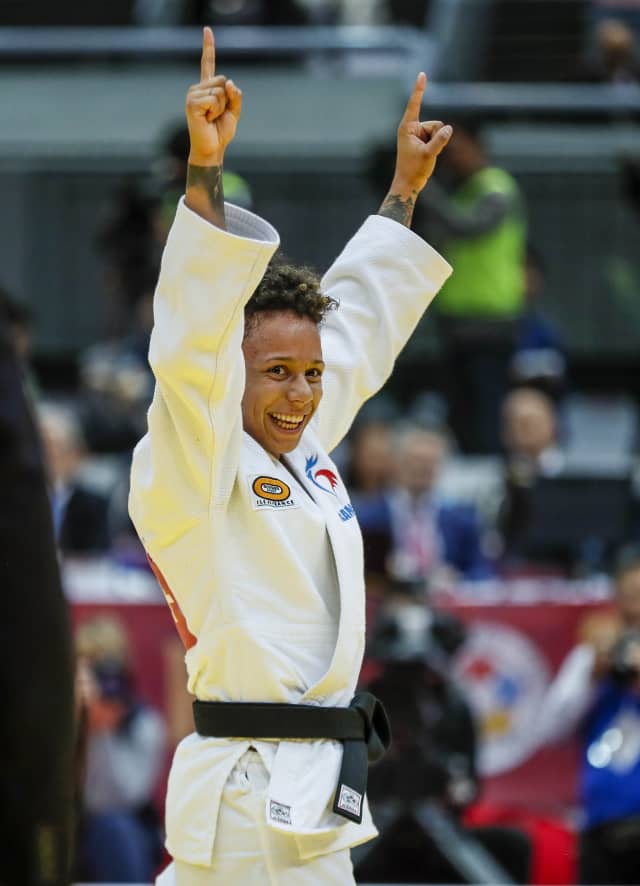 In the first semi-final BUCHARD held down Budapest Grand Prix winner Chishima MAEDA (JPN) for 20 seconds and ippon to advance to the final after prevailing in golden score.

In the second semi-final ABE beat former world champion SHISHIME Ai (JPN) by countering an uchi-mata with one minute left on the clock for ippon.

The first bronze medal was awarded to SHISHIME who trapped Abu Dhabi Grand Slam bronze medallist PARK Da Sol (KOR) in osaekomi for 20 seconds in a result which does little to alter her status in any way as her country’s number two in the -52kg category.

The second bronze medal was won by MAEDA who beat Brasilia Grand Slam silver medallist Larissa PIMENTA (BRA) by a waza-ari score to earn her first Grand Slam medal at the expense of the young Brazilian. 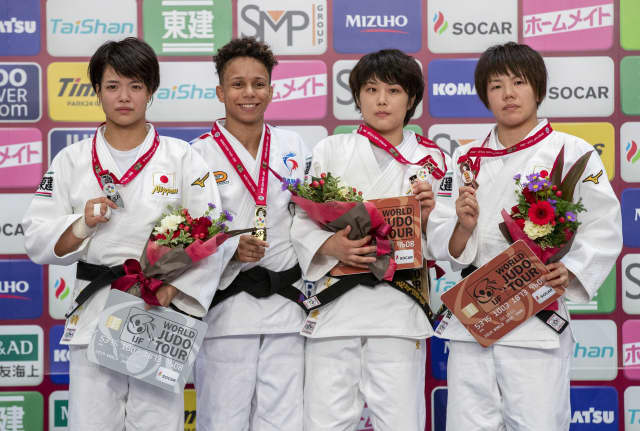 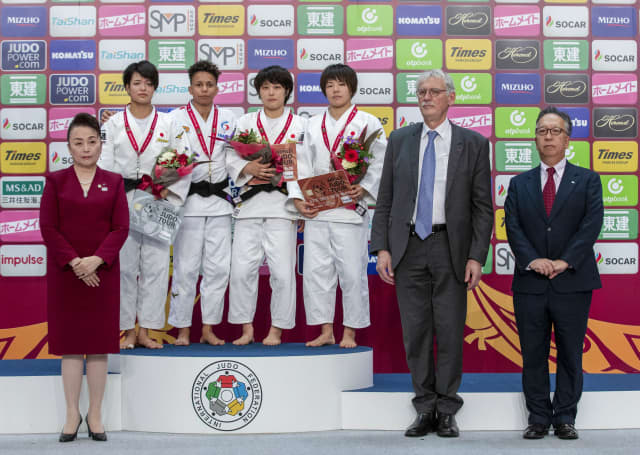 Three-time Grand Prix winner TAMAOKI Momo (JPN) defeated world number eight LIEN Chen-Ling (TPE) to open her Grand Slam gold medal account on home soil. TAMAOKI has form on the Grand Slam stage with five medals to her name before today but the Japanese number two claimed top spot for the first time at the expense of 2017 Baku Grand Slam winner LIEN. The world number 12 powered forward for a waza-ari score and held down her opponent from Chinese Taipei with a kami-shiho-gatame hold for 10 seconds and Osaka Grand Slam gold. 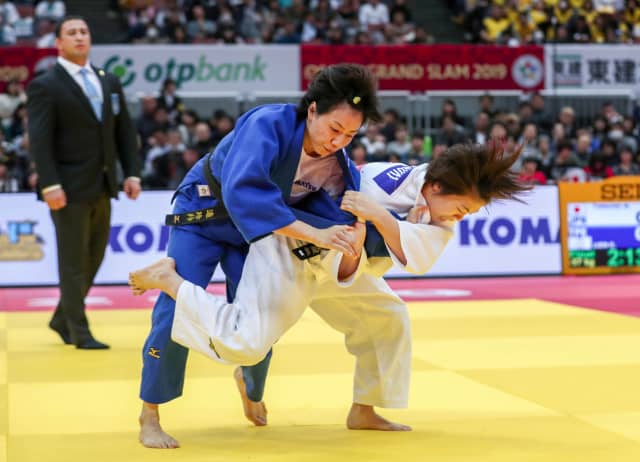 In the first semi-final world silver medallist and former world champion YOSHIDA Tsukasa (JPN) was surprised by TAMAOKI by a waza-ari score after three minutes of added time. 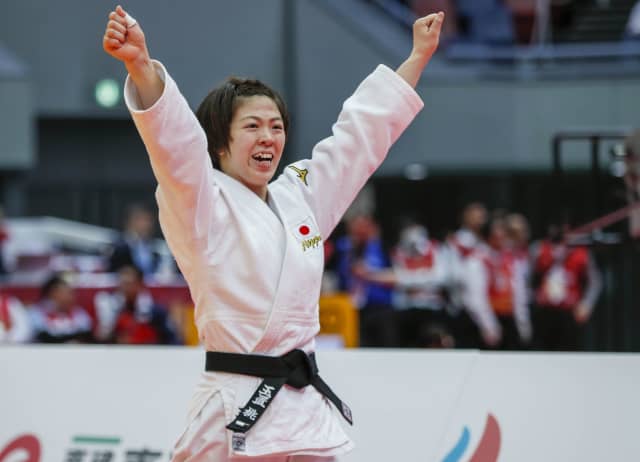 In the second semi-final LIEN pinned down Ekaterinburg Grand Slam bronze medallist FUNAKUBO Haruka (JPN) in golden score for 20 seconds with a sankaku-gatame. Japan-based LIEN, who is a member of the Komatsu company team, beat her fellow ne-waza specialist on the ground to secure a place in a Grand Slam final for the second time in her career.

The first bronze medal was awarded to former world champion and Olympic silver medallist DORJSUREN Sumiya (MGL) who narrowly defeated FUNAKUBO with a scrappy waza-ari score. The Mongolian took full advantage of the young Japanese judoka being off balance to push her over with te-waza in added time to win bronze for Mongolia.

The second bronze medal was won by 2018 Osaka Grand Slam winner Jessica KLIMKAIT (CAN) with a hard-fought triumph over former world champion YOSHIDA. KLIMKAIT dropped under her rival for a waza-ari score on the edge of the area and saw out the remaining time to record arguably the most important result of her career. 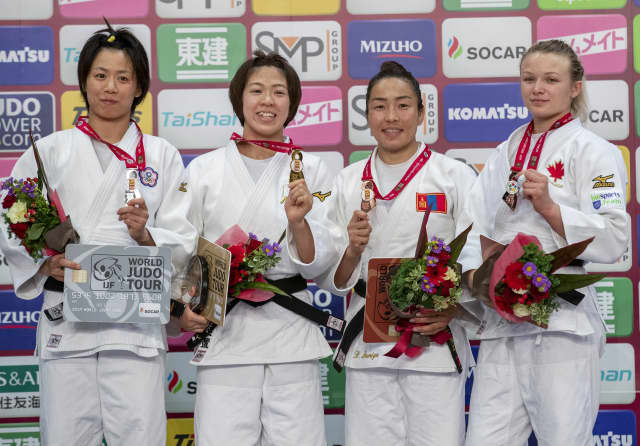 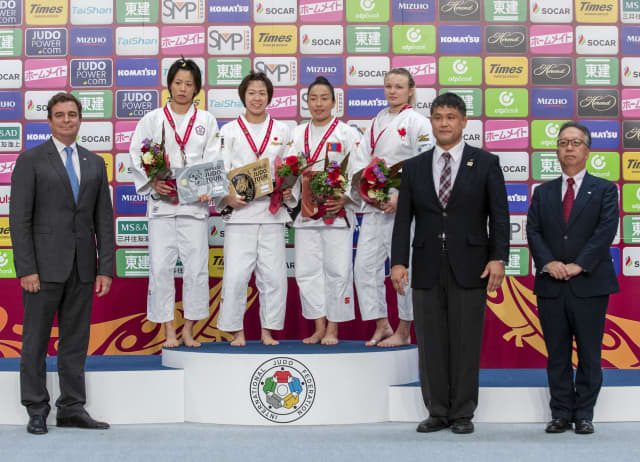 Three-time world champion TAKATO Naohisa (JPN) set a new record of 10 Grand Slam gold medal wins as he beat world number one and double world bronze medallist NAGAYAMA Ryuju (JPN) in the -60kg final. Olympic bronze medallist TAKATO avenged his World Championships defeat at the hands of his Tokai University teammate by throwing beautifully in golden score with ashi-waza and against the run of play. TAKATO punched the air in delight while NAGAYAMA looked stunned having been in control of the contest until the golden score period. 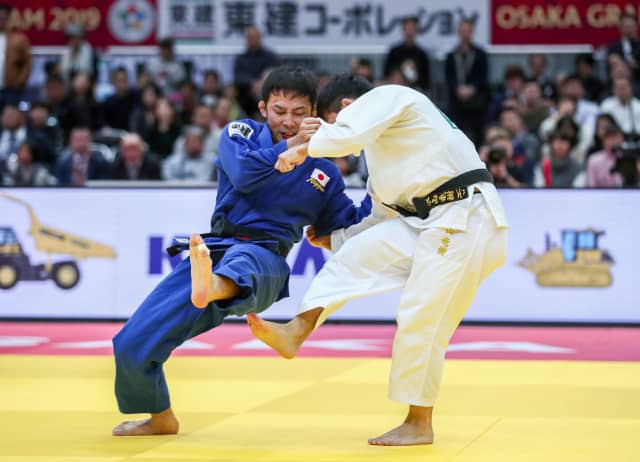 In the first semi-final NAGAYAMA defeated Tashkent Grand Prix bronze medallist YANG Yung Wei (TPE) by a waza-ari score after going the distance in a competitive contest. A sode-tsurikomi-goshi was the difference as NAGAYAMA produced a solid display to seal his place in the final. 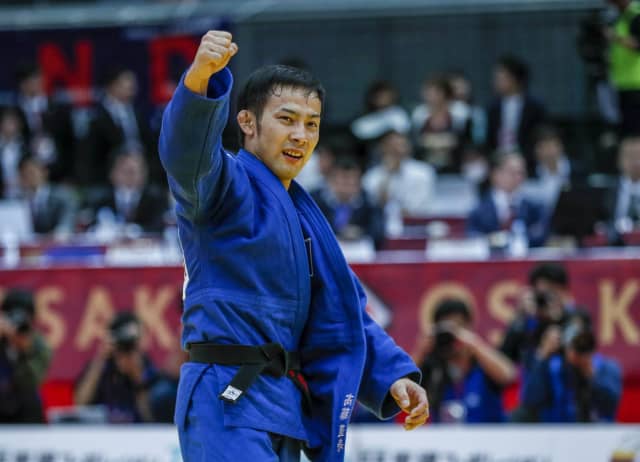 In the second semi-final TAKATO defeated former Budapest Grand Prix winner AOKI Dai (JPN) after the latter was disqualified in golden score for endangering the left arm of his compatriot to prematurely end an intriguing contest.

The first bronze medal was won by two-time world bronze medallist KIM Won Jin (KOR) as AOKI could not compete having received a direct hansoku-make in his previous contest for an attack that was deemed to be against the spirit of judo.

The second bronze medal went to YANG who trapped world number 22 LEE Harim (KOR) with a sankaku-gatame for ippon and his first Grand Slam medal. World number 14 YANG doubled his country’s medal tally on day one as he finished well after throwing his adversary with an o-soto-gari to engineer the osaekomi-waza opportunity. 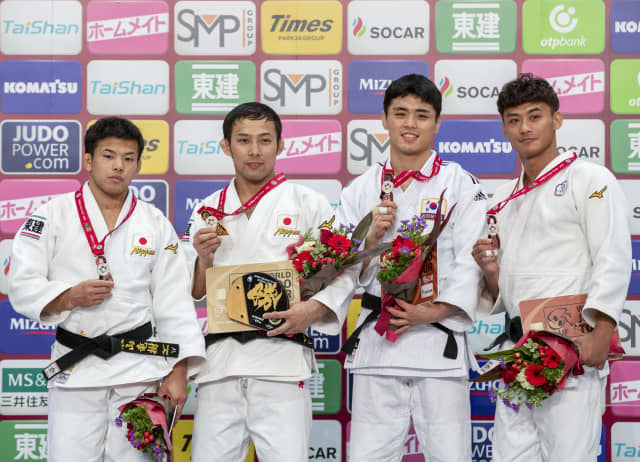 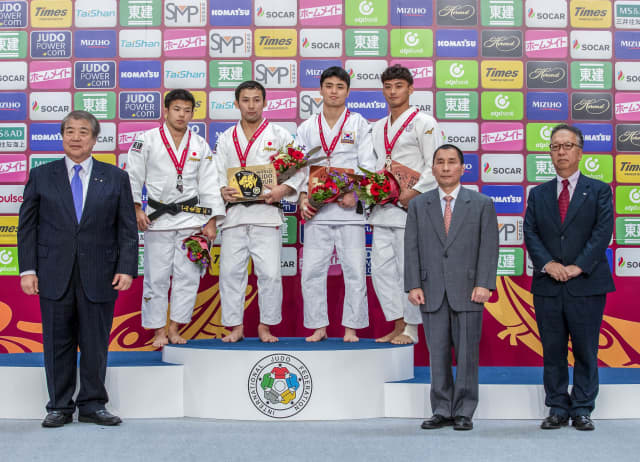 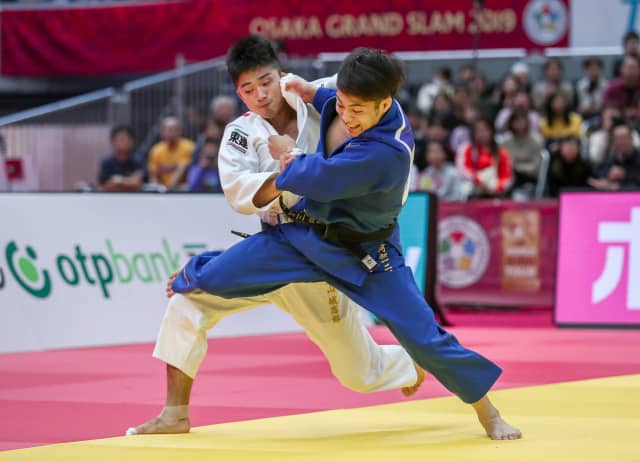 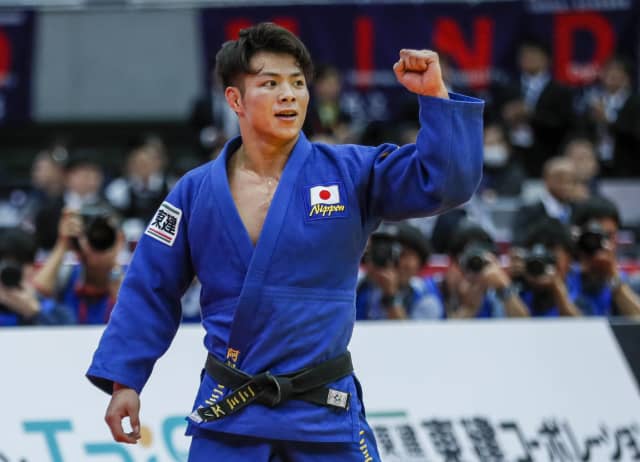 While MARUYAMA led their head-to-head series on the international stage 2:1 it was the seven-time Grand Slam winner who had the better of the final and caught the Tenri man for a waza-ari score to send the crowd wild and to make sure that the race for Tokyo continues into 2020 for the Japanese in the -66kg category.

In the first semi-final MARUYAMA defeated NISHIYAMA Yuki (JPN) by a single waza-ari score to edge closer to sealing a place at the Tokyo 2020 Olympics.

In the second semi-final ABE emphatically beat Tashkent Grand Prix silver medallist AIDA Yuji (JPN) by ippon having led by a waza-ari score to power into the final and setup an anticipated showdown with MARUYAMA.

The first bronze medal was won by AIDA who saw off Tbilisi Grand Prix bronze medallist Daniel PEREZ ROMAN (ESP) by a waza-ari score. The 20-year-old newcomer won Grand Slam hardware at his first attempt and could be a factor for the hosts following the Tokyo 2020 Olympics.

The second bronze medal went to NISHIYAMA who floored world number 104 David GARCIA TORNE (ESP) for ippon. The win, after 75 seconds, meant that it would be a clean sweep for Japan in the -66kg category as the hosts had to prepare to raise four Japanese flags to the rafters for the awarding ceremony. 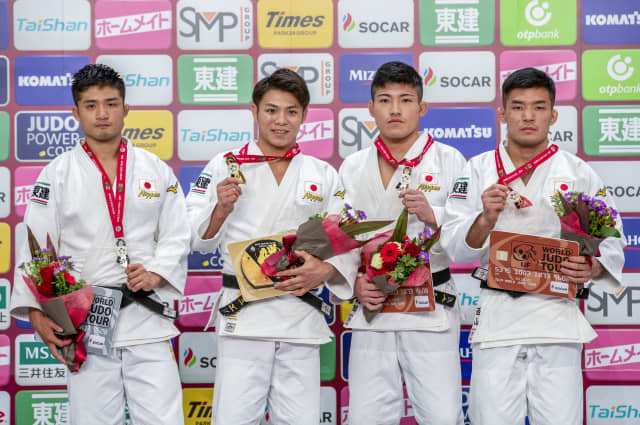 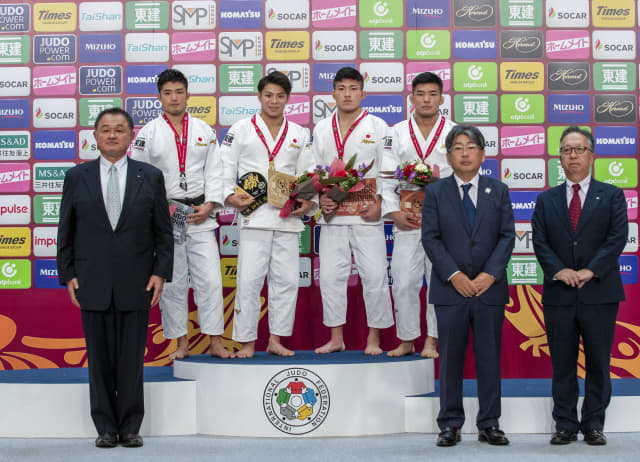