World number nine Klara APOTEKAR (SLO) won her maiden Grand Slam gold medal and maintained her 100% record against world number 12 Luise MALZAHN (GER) by winning the -78kg final. APOTEKAR was awarded the win after 50 seconds of golden score when the 21-time Grand Prix medallist from Germany was given a direct direct hansoku-make for endangering the right arm of her opponent. 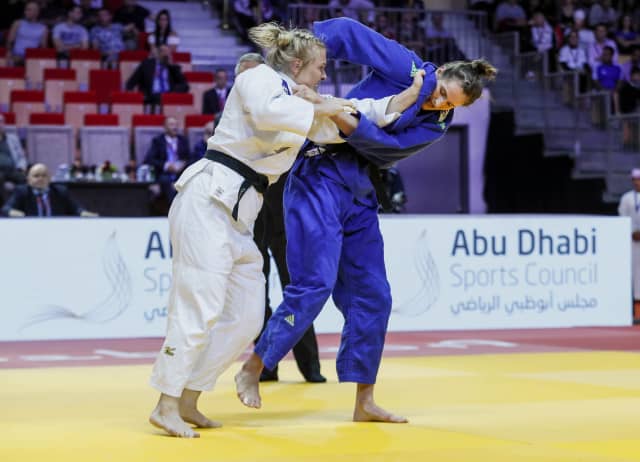 In the second semi-final world number 10 Loriana KUKA (KOS) suffered a defeat at the hands of APOTEKAR from a waza-ari score in added time.

The first bronze medal contest was won by world champion Madeleine MALONGA (FRA) who used her long legs to catch KUKA with an o-uchi-gari for ippon. The Frenchwoman, who lost her quarter-final to MALZAHN, salvaged a place on the podium in her first appearance on the circuit since winning her first world crown in Tokyo.

The second bronze medal was won by European Games silver medallist Guusje STEENHUIS (NED) who dismissed LEE after 90 seconds with an o-uchi-gari for ippon as the Netherlands continued to impress in the United Arab Emirates. 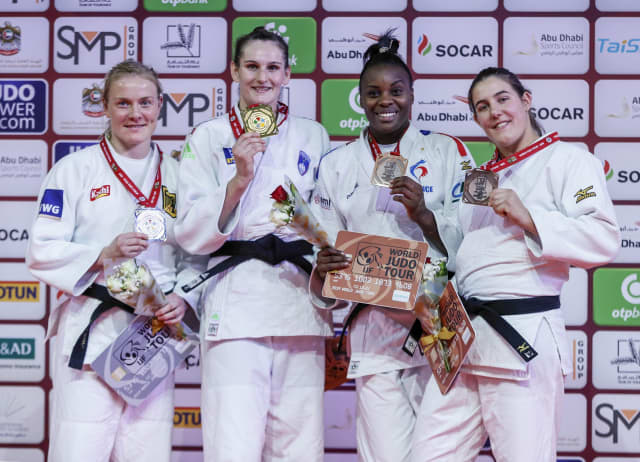 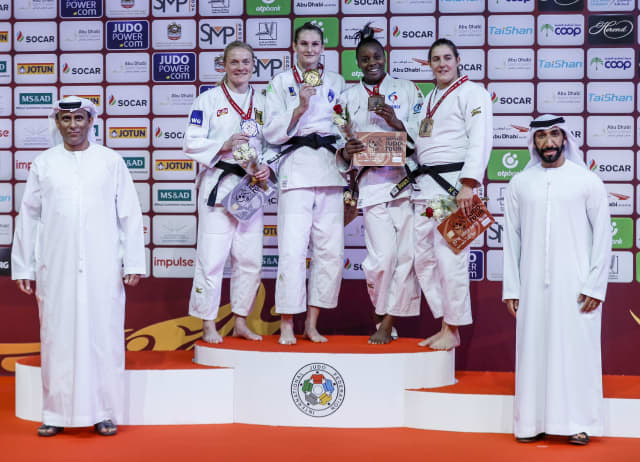 Universiade gold medallist HAN Mi Jin (KOR) won her first Grand Slam crown with a resounding win over world number 12 Anne Fatoumata M BAIRO (FRA) in the +78kg final. HAN launched her talented French foe with a uchi-mata after just 70 seconds and burst into tears after recording the biggest win of her career and one which opens the door for her to make a late run for a place at the Tokyo 2020 Olympics. 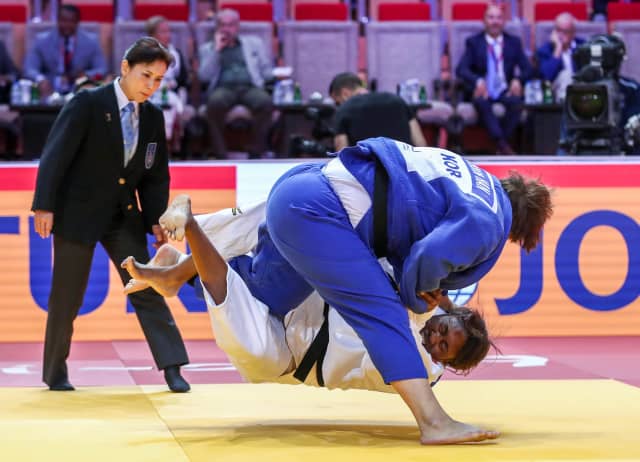 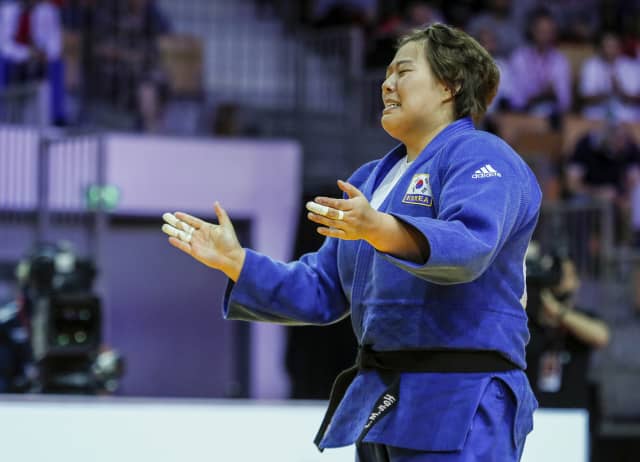 In the second semi-final world number four Larisa CERIC (BIH) fell to HAN by a waza-ari score as the little-known South Korean secured a place in the final.

The first bronze medal was won by Maria Suelen ALTHEMAN (BRA) who saw off the challenge of CERIC by ippon with a trademark makikomi to double Brazil’s medal haul in Abu Dhabi.

The second bronze medal was won by world number 11 Nihel CHEIKH ROUHOU (TUN) who threw KIM for a waza-ari and held down the stunned South Korean for 10 seconds to add a second and match-winning waza-ari score. CHEIKH ROUHOU lifted up her coach towards the rafters in celebration - which the crowd lapped up - and can expect to break into the world’s top 10 after scooping her seventh Grand Slam medal. 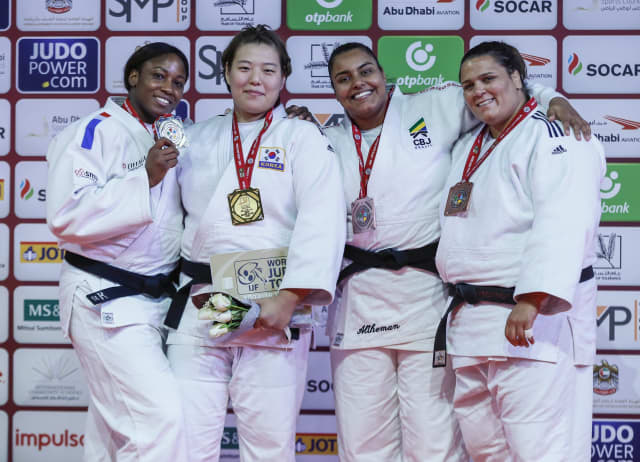 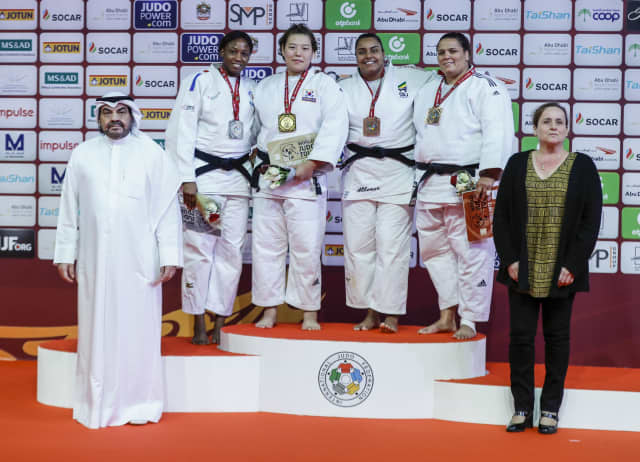 Former world champion Nikoloz SHERAZADISHVILI (ESP) defeated GWAK Donghan (KOR) to win his second Grand Slam this month. Olympic bronze medallist GWAK, who won their only previous meeting on home soil in Jeju in 2015, was appearing in his second Grand Slam final of the season having won gold in Paris in February. There was nothing to separate the Abu Dhabi finalists after four minutes elapsed without the scoreboard being called upon. Three minutes of golden score was required to produce a winner as the in-form SHERAZADISHVILI changed direction and threw for a waza-ari score. 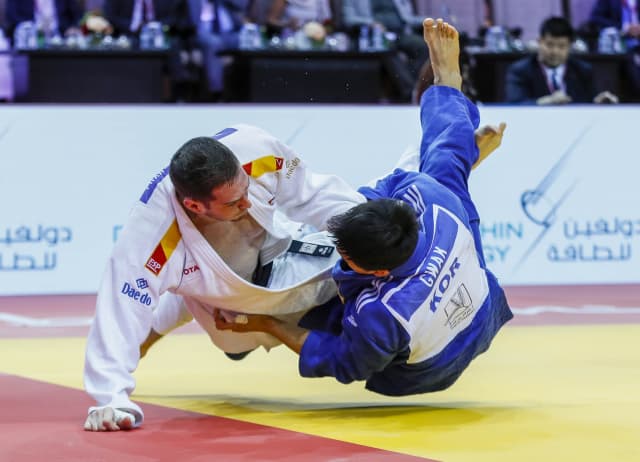 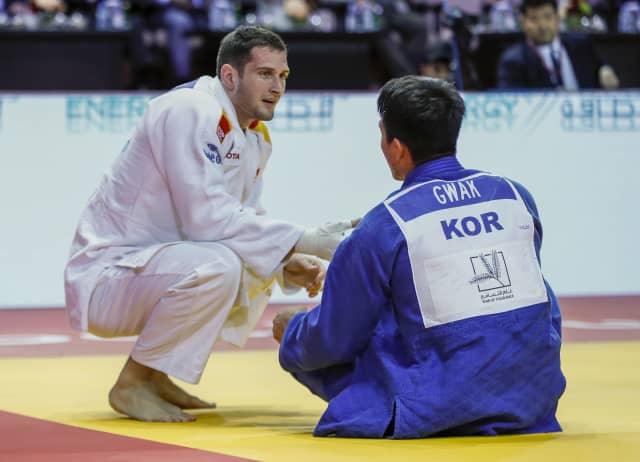 In the second semi-final former world silver medallist TOTH Krisztian (HUN) slipped to defeat against GWAK by a waza-ari score which was the only score in the last four meeting.

The first bronze medal was won by world number 16 Eduard TRIPPEL (GER) who executed a neat sumi-gaeshi to catch TOTH by surprise for ippon.

The second bronze medal went to former -81kg world champion Avtandili TCHRIKISHVILI (GEO) after MAJDOV was disqualified for picking up his third shido for a gripping infringement. In an all-action first-time meeting it was the elder statesman who prevailed and earned his first Grand Slam medal in the -90kg category since moving up in 2017. 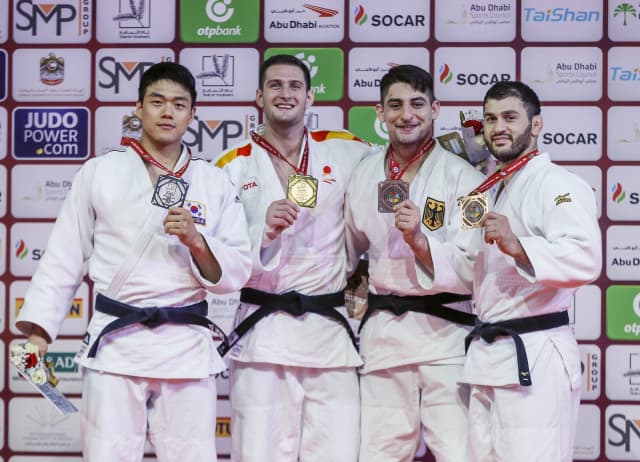 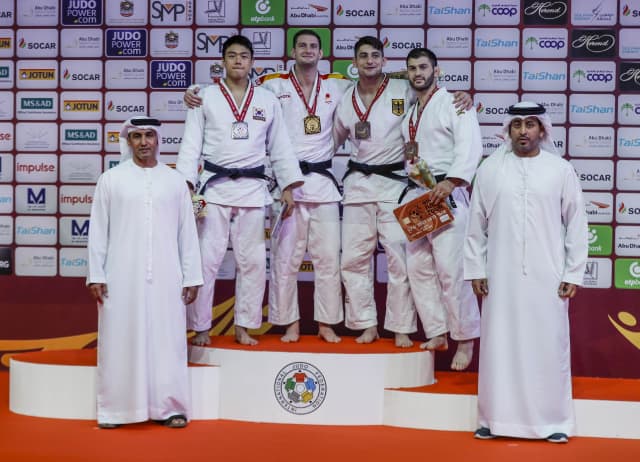 Former world champion CHO Guham (KOR) defeated Tashkent Grand Prix silver medallist Zelym KOTSOIEV (AZE) to win his country’s second gold medal on the final day of competition in Abu Dhabi. CHO outworked the 21-year-old Azeri for a narrow win after KOTSOIEV was handed his third shido for passivity which was loudly backed by the crowd. The cunning South Korean made himself look busy during golden score with a string of half-hearted attacks but in reality there was little intent as CHO is a master in this regard and left KOTSOIEV frustrated while the former celebrated with his usual vigour. 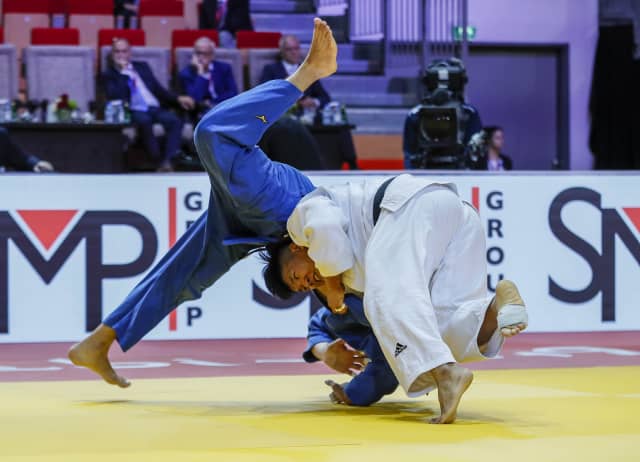 In the first semi-final CHO profited from a wasteful golden score period from world number 11 Shady ELNAHAS (CAN) who received hansoku-make for three shidos. 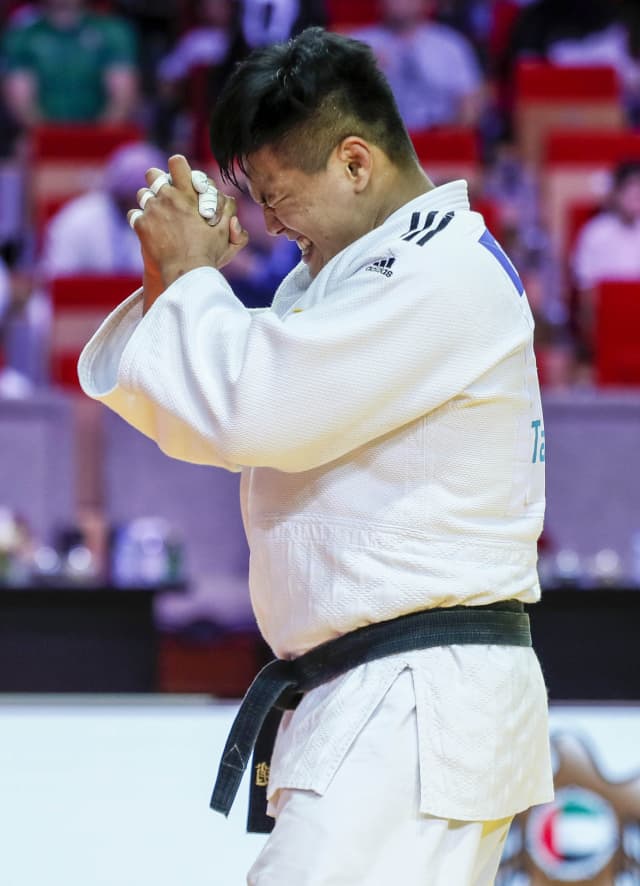 The first bronze medal was won by European Games winner Arman ADAMIAN (RUS) who drove past SISMANLAR with an o-soto-makikomi for ippon to claim his second Grand Slam medal.

The second bronze medal went to ELNAHAS who beat world number 73 Hussain Shah SHAH (PAK) by ippon from a ko-uchi-gake after just 32 seconds. 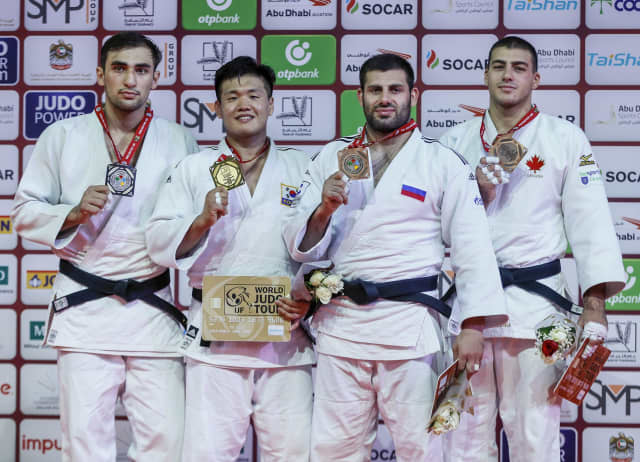 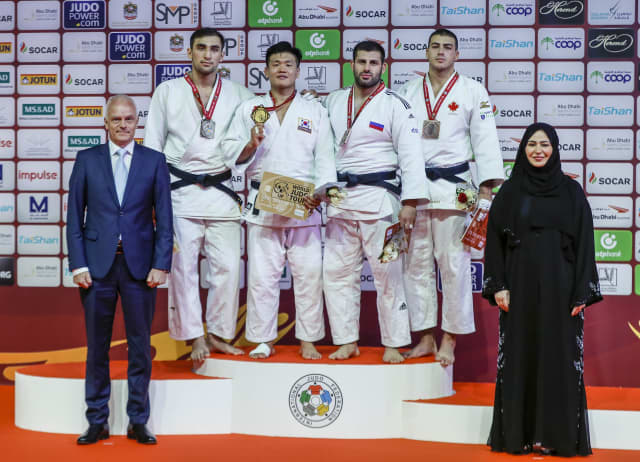 +100kg: MEYER makes his mark to signal his arrival as one of the world’s top heavyweights

World bronze medallist Roy MEYER (NED) held down former world bronze medallist Yakiv KHAMMO (UKR) for 20 seconds in added time to achieve his first Grand Slam victory. The world number six used his bulky frame to control his Ukrainian rival on the ground to follow up on his superb World Championships display with gold in Abu Dhabi. One-time Grand Slam winner KHAMMO failed to impose himself while MEYER is now in pole position in the Dutch battle for the +100kg spot at Tokyo 2020. 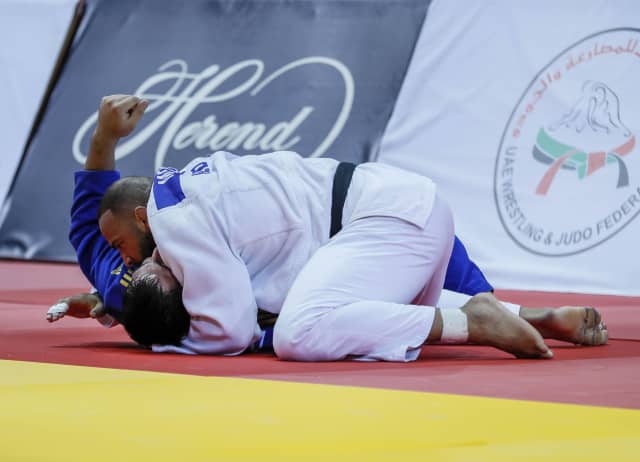 In the first semi-final MEYER countered world number 24 Iurii KRAKOVETSKII (KGZ) for ippon with six seconds left on the clock. 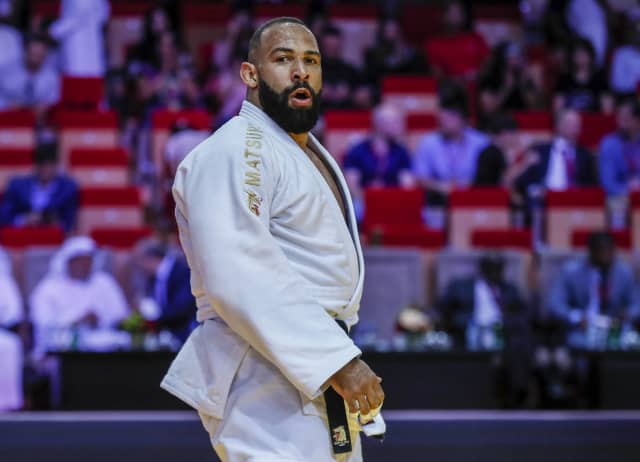 In the second semi-final world number 18 Ushangi KOKAURI (AZE) was brushed aside by KHAMMO who advanced with a sumptuous sumi-gaeshi that is rarely seen in the men’s heavyweight category.

The first bronze medal was won by KOKAURI who sent world number 43 Oleksandr GORDIIENKO (UKR) over with a uchi-mata for the maximum score and his second Grand Slam medal for Azerbaijan. A weak ko-soto-gake was countered in style by the Azeri who will be among the heavyweight field at the season-ending Masters in December.

The second bronze medal went to five-time Grand Slam winner KIM Sungmin (KOR) who powered KRAKOVETSKII over with a beautiful counter for ippon as South Korea were omnipresent in the final block. 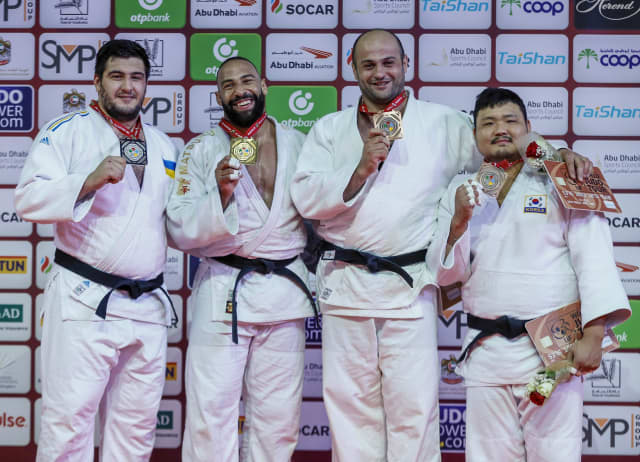 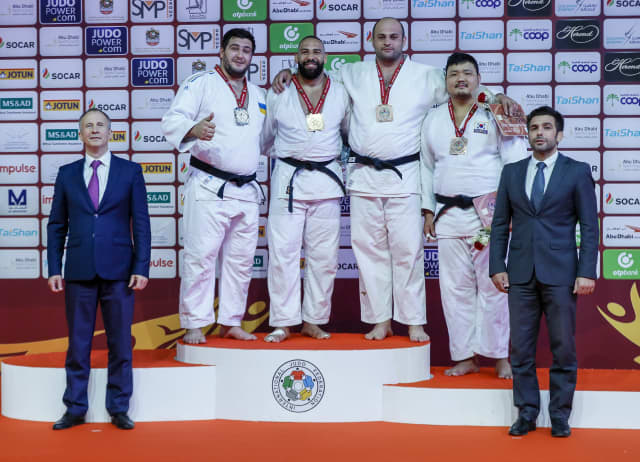