Analysis of a breakthrough: Iran judo to end boycott against Israel

Written by Alan Abrahamson on 12. May 2019
Share
For decades, Iran’s athletes have refused to compete against Israelis. No matter the sport, no matter the situation.

In a historic breakthrough, the International Judo Federation announced that for Iran’s judo athletes the boycotts would be no more.

Iran’s Olympic committee and its national judo federation, in a letter dated Thursday and made public Saturday, agreed to “fully respect the Olympic Charter and its non-discrimination principle.”

In a statement posted on its website, the IJF said the letter came after talks that followed the “disturbing phenomenon” involving the “sudden ‘injury’ or failure of weigh-in of Iranian athletes,” a “phenomenon which is linked by many observers to the possible obligation of the given athletes to compete against certain countries.”

The IJF, it said, “decided to step up in order to protect the right of athletes to fair competition.”

Neither the Iranian letter nor the IJF statement specifically mentions Israel. But the context is clear. 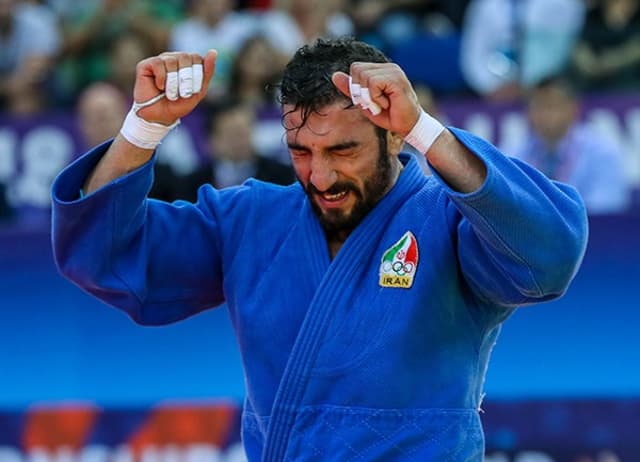 Iran’s sports policy has long been linked to the nation’s official refusal to recognize Israel. For nearly 40 years, Iranian athletes have markedly found reason to avoid facing Israelis. The last international competition between the two: a wrestling match in 1983, in Kiev, Ukraine.

Indeed, the co-signer of that Thursday letter, the recently elected president of the Iranian judo federation, Arash Miresmaeili, was infamously disqualified at the 2004 Athens Olympics for weighing in at four pounds above the weight class for his under-66 kilogram first-round match with Israel’s Ehud Vaks. He was treated like a hero — reportedly awarded $125,000 by the Iranian government, the same amount granted gold medalists.

Even now, Iranian leaders routinely use incendiary rhetoric to refer to Israel and its athletes.

All the same, the IJF had apparently threatened to ban iran from international competition, including next summer’s Tokyo Olympics, if it did not agree to respect the fundamental rules. The Iranian letter is copied to International Olympic Committee president Thomas Bach. In that document, the Iran NOC and judo federation said they were negotiating with the country’s parliament “to identify proper legal resolutions,” apparently in regard to the unofficial ban on competing with or against Israelis.

“This is a most significant letter [by the Iranian Olympic committee and judo federation] to the attention of the International Judo Federation,” Israel’s International Olympic Committee member, Alex Gilady, said in a telephone interview.

“Now,” he added, “will come the time for implementation in the fight against discrimination in all sport.”

It has long been understood in judo circles that Iranian athletes have been eager to compete. The issue has been getting clearance from those above.

In recent months, the IJF, under president Marius Vizer, a forceful proponent of fair play, has ratcheted up pressure on boycotts of Israeli athletes. Vizer has said many times and made plain in many ways that fair means fair for everyone.

Last year, the IJF took away tour stops from the UAE and Tunisia over refusals to allow Israelis to compete with their national colors, symbols and anthem.

The UAE later allowed the Israelis to compete as Israelis. At the Abu Dhabi tour stop, Sagi Muki won gold in the 81-kilo class.

This past February, at one of the IJF’s most important annual events, the Paris Grand Slam, in that 81-kilo class, Iran’s Saeid Mollaei, the 2018 world champion, threw a match to avoid facing Muki in the championship semifinals. Mollaei’s opponent was an athlete from Kazakhstan with a world ranking in the 200s; Mollaei allowed himself to be thrown just 20 or so seconds into the match.

Mollaei then fought back to take third but then had to be helped off the mat by the Russian he had just beaten — now apparently so injured he could not appear with Muki, the silver medalist that day, in the podium photo.

Muki on Saturday won the 81-kilo class at the IJF tour stop in Baku, Azerbaijan.

After the Paris stop, Vizer, who regularly does an ask-me-anything on Twitter, was asked how Mollaei could lose “on purpose” to “avoid a match” with Muki.

“We will seriously analyze the case because it’s not easy to explain from the methodological point of view how the athlete lost the contest. It’s a very complex situation. TBH, a part of the sport impact sometimes in the life you have to consider a lot of different aspects. The risk and the precaution for the family members and himself. The contradiction between the wish of our athletes and the system where he belongs. As well you know well that as an individual to break a system, especially in his country, it’s nearly impossible. From a sport and fairness POV, we will soon analyze the situation being convinced to find the fairest solution.”

He added: “ … We have solved in the past a lot of difficult situation which a lot of sports are confronted with. I hope to do the same in this case.”

Story
The Power of Words