I Only Know That I Know Nothing

Written by Pedro Lasuen on 01. Jul 2022
Photographs by Nicolas Messner
Share
When you want to learn you have to take things seriously and talk to the best. The Azerbaijan Judo Federation has understood this and has got down to work in the most literal sense. 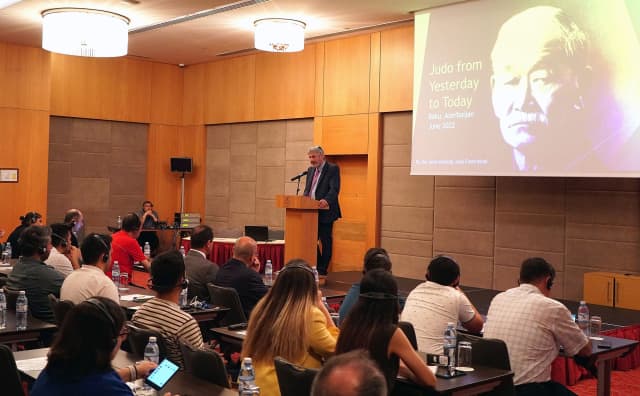 This year marks the fiftieth anniversary of the Association. Its leaders want to celebrate it and promote judo in the country and since they take it seriously, they have organised a seminar for the media. It is one thing to be a journalist and quite another to be a good journalist. It is one thing to want to communicate and another to inform and do it well. Judo is an extremely popular sport, both in Azerbaijan and in the world, but it is also a discipline with its history, its rules and its own idiosyncrasies. There are also not so many journalists specialising in this martial art, certainly far fewer than those who are dedicated to covering other specialties. What often happens and this is what justifies the organisation of the seminar, is that many sports journalists have to cover judo tournaments without being experts. 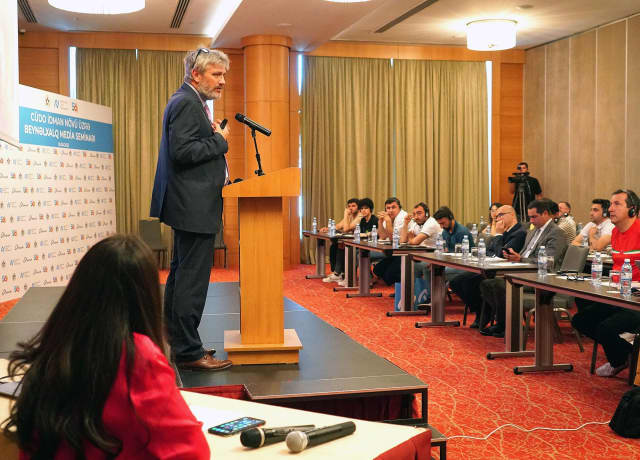 To correct the course, always for the benefit and projection of judo, the

AJF has called Nicolas Messner. Nicolas is the Media Director of the International Judo Federation, a fabulous photographer, notable writer, historian of judo and the one who knows best what happens behind the scenes of a judo tournament in terms of media and coverage. Nicolas has travelled to Baku to meet with journalists and photographers from the country and hold an intensive workshop. 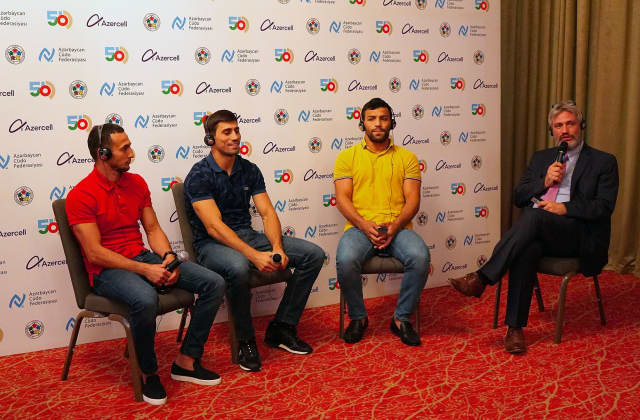 To warm up engines, Nicolas organised a presentation called ‘Judo from

yesterday to today,’ a detailed tour of judo and all its ramifications so that

those present could position themselves properly and not in an approximate

way, covering: how everything was before judo, the creation of our sport by Jigoro Kano, its development, values and philosophy, judo as it is today, as well as the projects of the International Judo Federation. That was just the beginning! 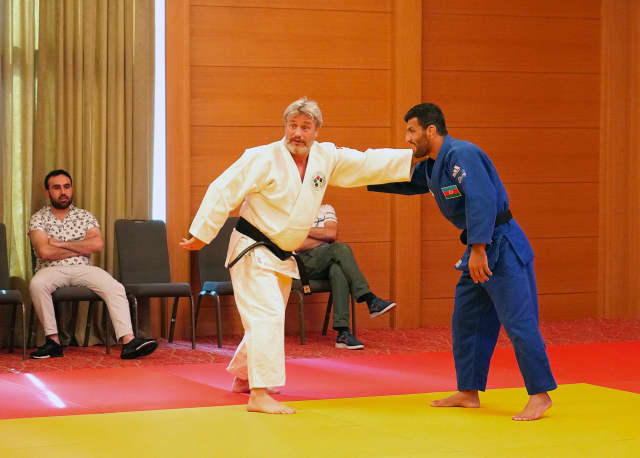 Later Nicolas went straight into the matter. For this he had the help of three judo stars: Rustam Orujov, Orkhan Safarov and Saeid Mollaei. You have to know how to interview an athlete; it is useless to formulate the traditional and irrelevant question, "how do you feel?” after a win or a loss. What counts, what makes the difference, is knowing how to ask before and after a fight. Judoka are champions, but they are also people of flesh and blood, with different personalities and sensitivities. Their goal is to earn ippon but there are several ways to do it and their successes and failures condition their answers. If the questions are not the right ones, the nuances can escape the understanding of the viewer or reader. For a sports professional to say really interesting things, you have to earn their trust and that can only be done with good questions and high quality articles or chronicles.

An interview, for example, will not have the same impact if it takes place before or after a tournament, or if, on the contrary, it takes place during a competition, because the stress is not the same, nor is the time available to the interviewer. These are basic things that most people know, but they have to be explained, as well as doubts about the status of one and the other, because the athlete is not a mythological and unattainable being, just as the journalist is not the enemy. Both have interests, win and inform, but there can be no symbiosis without knowing in depth the interiorities of a sport from a respectful point of view. That's the theory and then comes the practice. 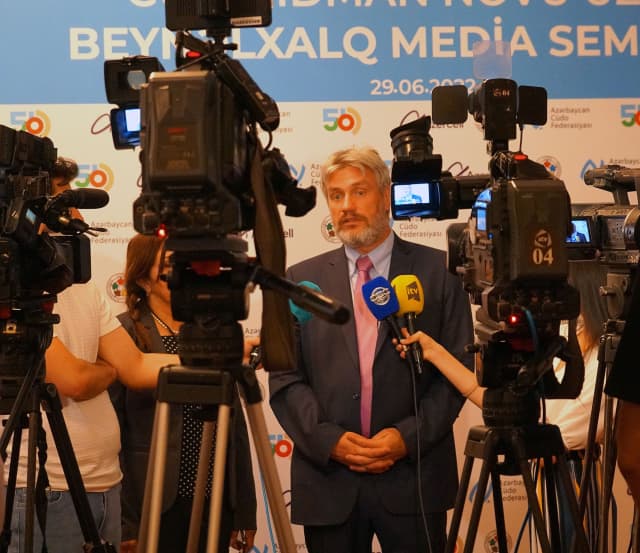 Nicolas organised a practical workshop including a judo session with Mollaei and Safarov to teach judo techniques and refereeing rules. You had to be attentive because the seminar was dense and complete. The response from the Azeri media was massive, with more than fifty journalists and their feedback was wholly positive.

Here is a summary of what was said afterwards.

“We have learned a lot, especially about the value dimension. We really

enjoyed the session with the athletes. They explained their expectations

and could say what they can offer, as well as the mindset that is theirs during competition. The format of the interview offered the possibility to exchange in a very relaxed way. The practical session was really appreciated as well, to understand the basics of judo. It's simple: score ippon to win. What is rich is the diversity of ways to score ippon. The practical session also offered the opportunity to explain training.”

For Nicolas, “It’s a really interesting format that mixes theory and practice. The organisation from the Federation was perfect: on time, simultaneous translation, one location that included a conference room and dojo next to each other. I do believe that bringing the media world together and spending time with them to tell them what we can deliver and what we are doing, is crucial. It's also a really good way to understand their needs. Generally speaking the media present were all sports specialists but they didn't really know judo. What they want is medals. When medals are not coming they don't understand why it is not easy to get them.” 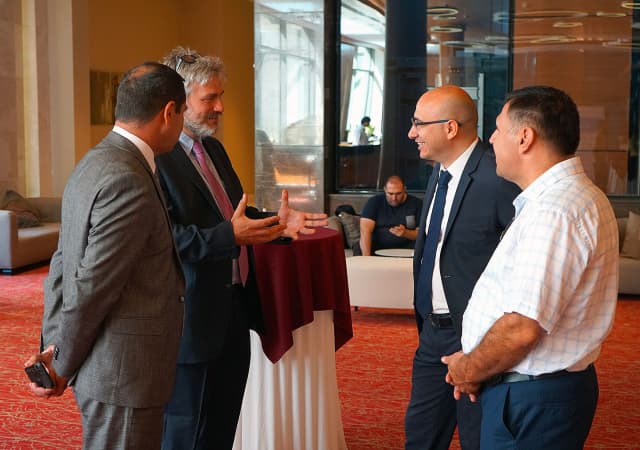 It´s really interesting to see that the Azerbaijan Judo Federation has a new vision for the future. They want to keep developing the top level but at the same time develop the grassroots level and attract more young people, both men and women. This is the key to future successes. This is what is meant when learning is discussed. It is necessary to have the will to do it and appeal to the best.

Present at the seminar, as proof of their real interest, were Elnur Mammadli, Vice-President of AJF, Rashad Rasullu, Secretary General, Rasahd Ibrahimov, Marketing and Communication Manager, Ulkar Abbasova, Press Secretary. Kamran Talibov, Organizational and Development Manager, and Orxan Orujzade, Education Manager. The AJF has spared no resources when opening the doors to a world, that ofjudo, one that is not always understood. The best thing has been the response of the media, because no matter how much ambition there is to teach, if there is no-one in front, it is a vain effort. In this case, the will of one party and the intelligence of the other, have given the expected results because, as Socrates said, "I only know that I know nothing" and this is the maxim that any journalist should apply every day to improve. There is always something to learn, both for an athlete and for the one who speaks and writes on the subject. Only then can progress be made.

Junior Worlds
-70kg: Tsunoda Roustant, the Only One!