Written by Nicolas Messner, Marina Mayorova on 22. Sep 2019
Share
The Tashkent Grand Prix edition 2019 ends with a very positive result, as a total of 29 countries reach the podium, a true apotheosis for Uzbek and world judo. At the top of the medal ranking, Russia won two additional gold medals on the third day of competition, increasing its gold medal count to five. Russia is followed a few miles behind by the host country, which besides the perfect success of the organization of the Grand Prix, also performs on the tatami. Austria makes a nice close by finishing on the third step of the podium with two titles as Uzbekistan, the difference being the total number of medals, seven for Uzbekistan and four for Austria. 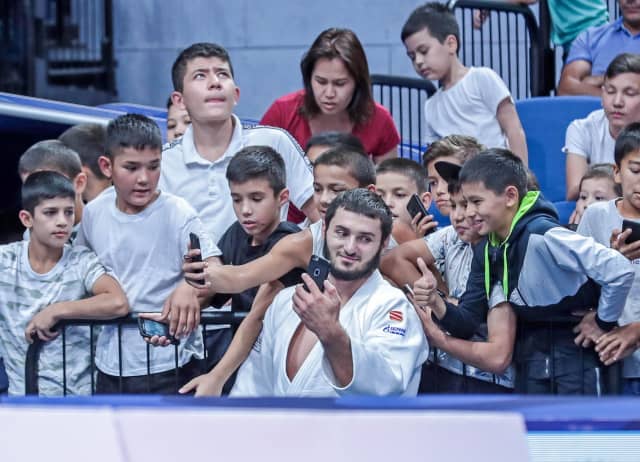 As we announced in the preamble of the tournament, being seeded in Tashkent offered no guarantee of being able to win the competition. In the absence of the great leaders, who were taking some rest after the Tokyo Worlds a few weeks ago, the matches were very open and this was confirmed during the last three days.

New faces have appeared on the podiums, a youth that grows stronger and stronger and dreams of taking the reins of world judo in the near future. The road is still long, however, until the next Tokyo 2020 Games. There are still many events and lots of points to distribute for the world ranking. The next meeting of the World Judo Tour will be in Brasilia, Brazil from October 6th to 8th.

In the meantime, the world circuit is taking a short break, to make room for the Cadets World Championships taking place from 25 to 28 September in Almaty, Kazakhstan. But by then, the judo continues for a few more days in Tashkent, since Monday, it is Judo IBSA (Visually Impaired) that takes over in the Humo Arena. As part of the Memorandum of Understanding signed between the IJF and IBSA, the International Judo Federation will support the organization of the event, which is also a qualifier for the 2020 Paralympic Games.

The last match of the category opposed the winner of 2018 The Hague Grand Prix, Antonina SHMELEVA (RUS) and the 16 time medal winner on the World Judo Tour, Bernadette GRAF (AUT). Knowing her subject perfectly, GRAF mastered her opponent's with head and shoulders to add a 17th medal to her prize list, by immobilizing the Russian in the second half of the match. 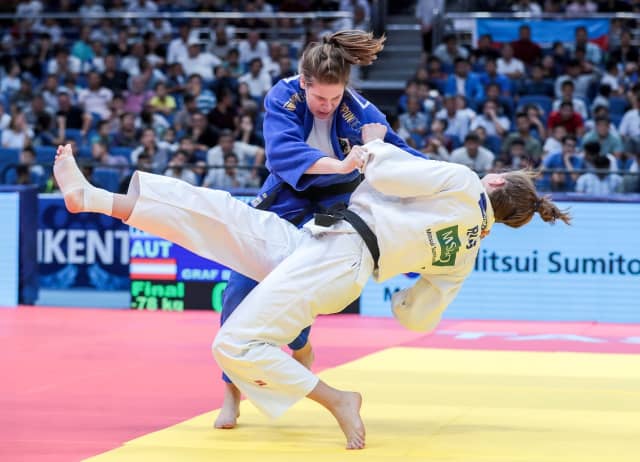 Despite the two shido on her name Karla PRODAN (CRO) dominated the first bronze medal contest against NefeliPAPADAKIS (USA) as she had secured a waza-ari. This is PRODAN's second medal on a Grand Prix. 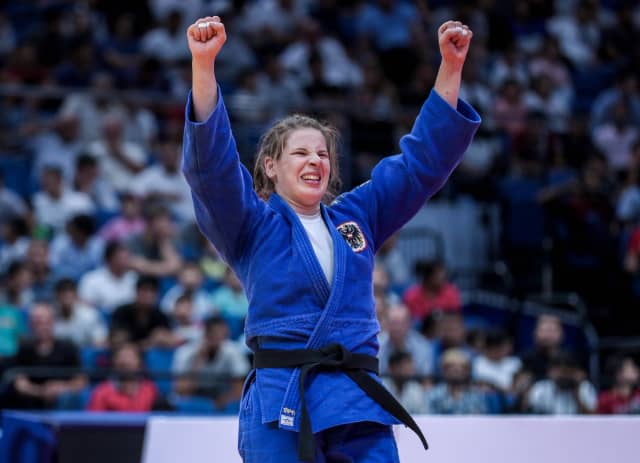 No. 1 seed Natalie POWELL of the UK failed to advance to the finals, but she found herself in the position to still be on the podium against YOON Hyunji (KOR). The match remained uncertain for a long time, with imprecise attacks from one side and the other not allowing either competitor to take the lead. After working on the edge of the competition ara, the Korean relaxed too early and was wrapped by the counter of POWELL who won the bronze medal and stepped on the podium of a World Judo Tour event for the 28th time. What regularity! 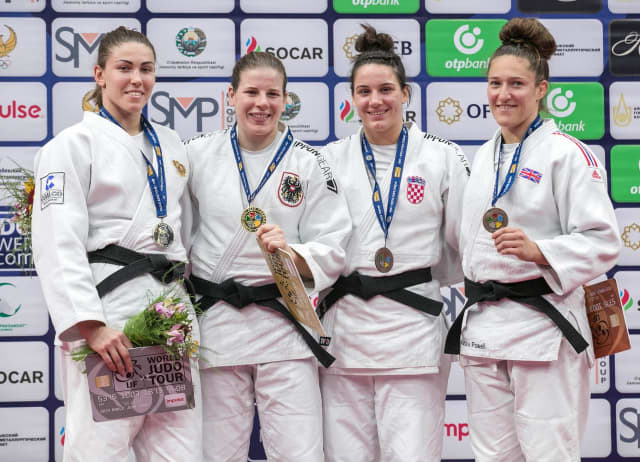 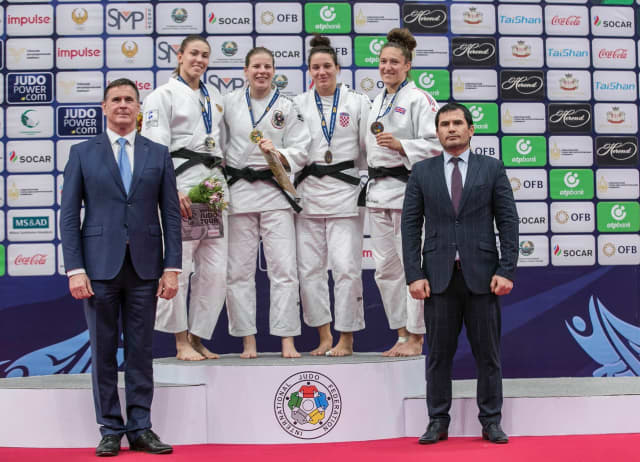 The last female match of the weekend opposed KIM Hayun (KOR) and Kseniia CHIBISOVA (RUS), who took only 23 seconds to score ippon with a massive attack giving no chance to KIM. 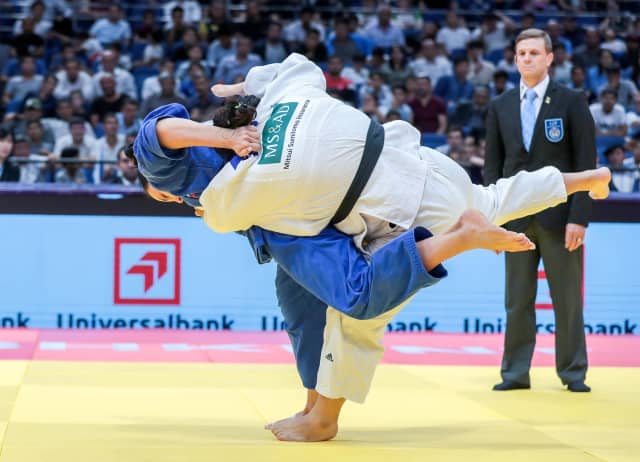 The first final for the bronze medal was between Sara ALVAREZ (ESP) and Sarah ADLINGTON (GBR), holder of 4 bronze medals in Grand Prix so far. After the four minutes, nothing was written on the scorecard. But it only took a few seconds during the extra time for ADLINGTON to finally throw her opponent on a makikomi. Fifth bronze medal in Grand Prix for the British. 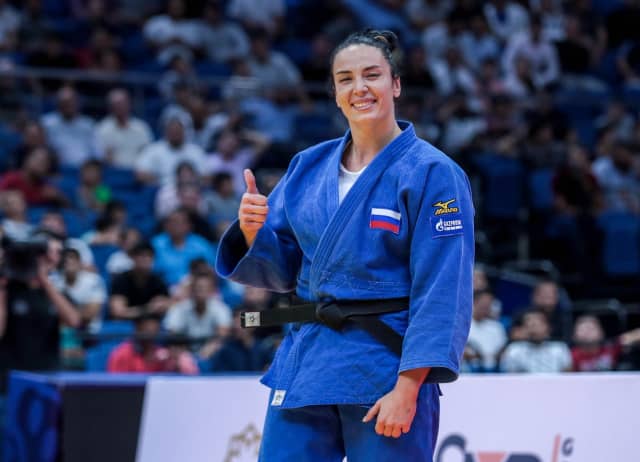 Milica ZABIC (SRB) was the first in action against Raz HERSHKO (ISR) in the second match for the bronze medal. Scoring a first waza-ari on a shoulder movement, she reproduced her effort a few seconds later thanks to a spectacular morose-seoi-nage which literally propelled HERSHKO in the air, before she landed flat back, for this time a perfect ippon. 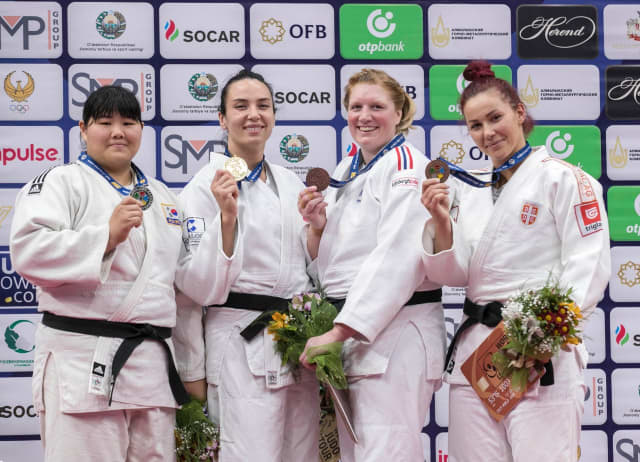 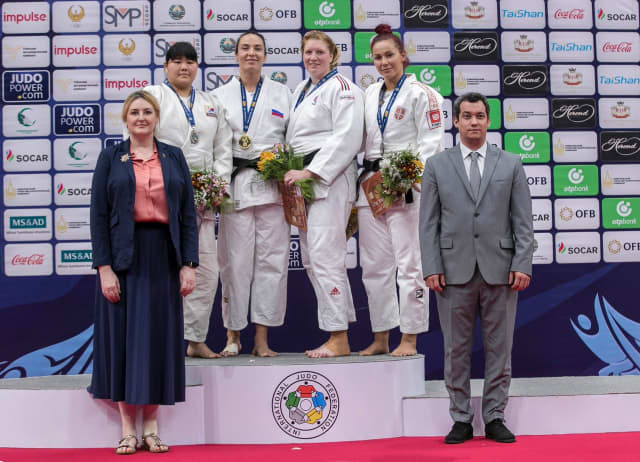 Half of the match had not yet come that the two finalists, Marcus NYMAN (SWE) and Khusen KHALMURZAEV (RUS) were already penalized each of two shido for passivity. Producing a huge effort to take control of the kumikata, neither NYMAN nor KHALMURZAEV could really attack and burned the last calories they had left by entering a tense golden score. At this little game, it was NYMAN who finally found the opening on a turnaround, and immobilized the Russian to win the gold, his 11th medal on the World Judo Tour. 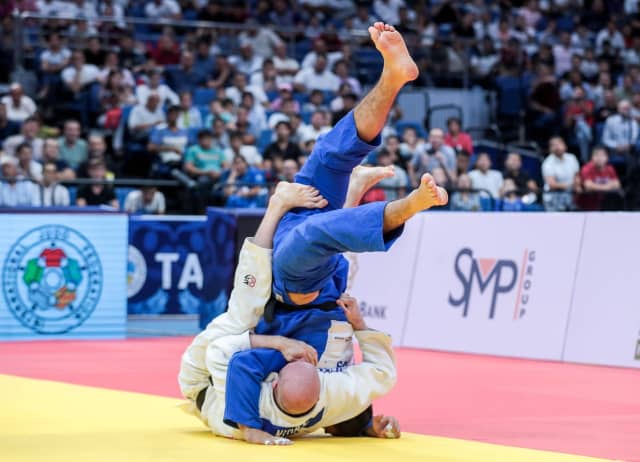 The first match for the bronze medal was between defending Olympic Champion BAKER Mashu (JPN) and young Lasha BEKAURI (GEO). Away from the World Judo Tour for several months due to a shoulder injury, the Japanese returned to the competition on the occasion of this Grand Prix. Looking to come back to his best level, BAKER certainly did not come to Tashkent to the best of his abilities and he suffered throughout the day, being eliminated in the quarter-finals by the very fit Marcus NYMAN (SWE) and being mistreated from the outset of the bronze medal contest against the fiery Georgian. 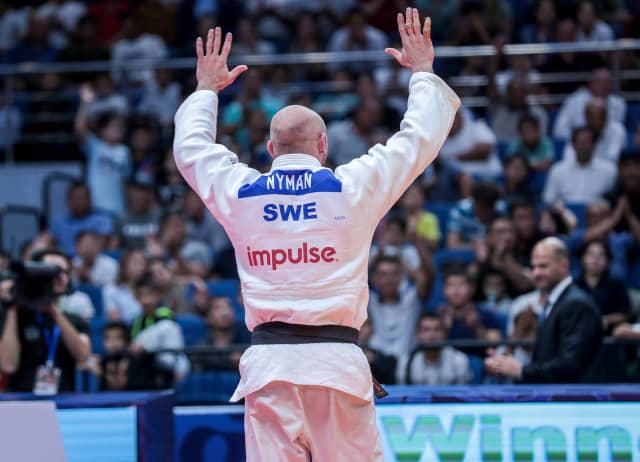 The latter quickly marked a magnificent waza-ari. Taller than BAKER and taking advantage of his reach, BEKAURI seemed to dominate his opponent, when he was controlled on the ground with an immobilization that almost came to an end. Hope returned to the Japanese camp. But BEKAURI managed to extricate himself in extremis from a difficult situation: a waza-ari on both sides. It was finally on the last action, at the very last second that the Olympic Champion managed to conclude on one last immobilization. His was to the podium was long and difficult, but it is a beautiful medal for BAKER after his absence from the circuit.

The second bronze medal contest between Peter ZILKA (SVK) and Erlan SHEROV (KGZ) seemed to be quite balanced between the two competitor, when SHEROV launched an attack which was lacking control. At that level of competition, a little mistake can have immediate consequences, and that is what happened as ZILKA immediately counterattacked with a massive ura-nage for a cristal clear ippon. 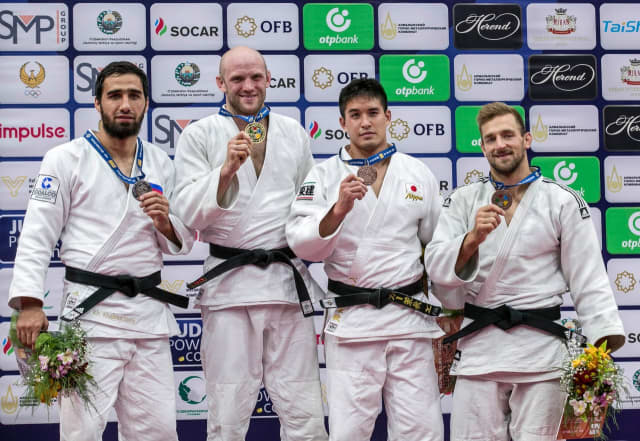 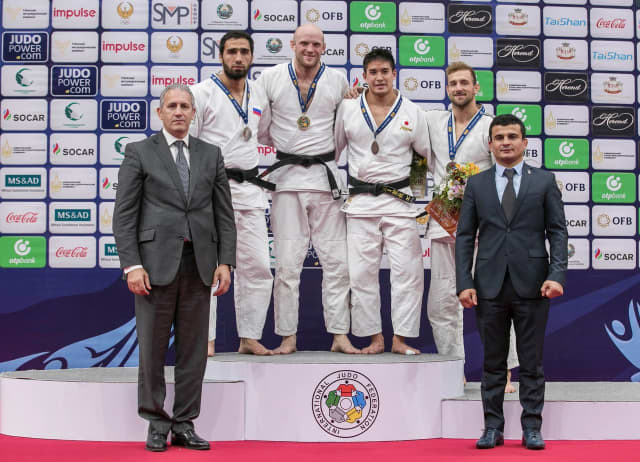 The Russian team is always able to create surprises. The four finalists on the third and final day of the Tashkent Grand Prix 2019 edition was therefor no exception. If the first two gold candidates of the day had previously failed, Kazbek ZANKISHIEV (RUS) was in the position to bring back a fourth gold medal for his team. He was opposed to Zelym KOTSOIEV (AZE). After a slow start, in which the two athletes showed all their will not to let go, it is finally ZANKISHIEV who concluded on a masterful o-soto-makikomi. 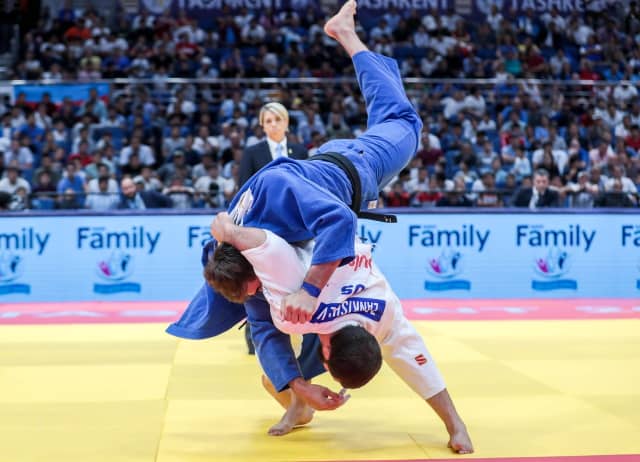 In the first bronze medal contest Bojan DOSEN (SRB) faced Daniel MUKETE (BLR), who stepped on the podium with a waza-ari advantage.

Apart from a few penalties, nothing was scored during the regular time between Viktor DEMYANENKO (KAZ) and Mikita SVIRYD (BLR) for the second bronze medal. Having already two shido, DEMYANENKO was penalized a third time, for the happiness of SVIRYD who won his second medal in Grand Prix. 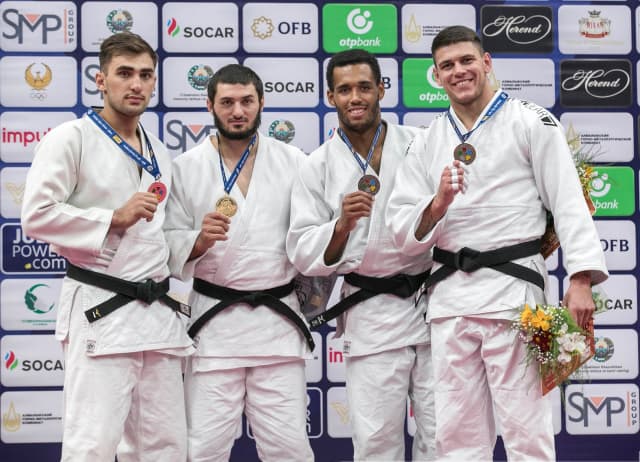 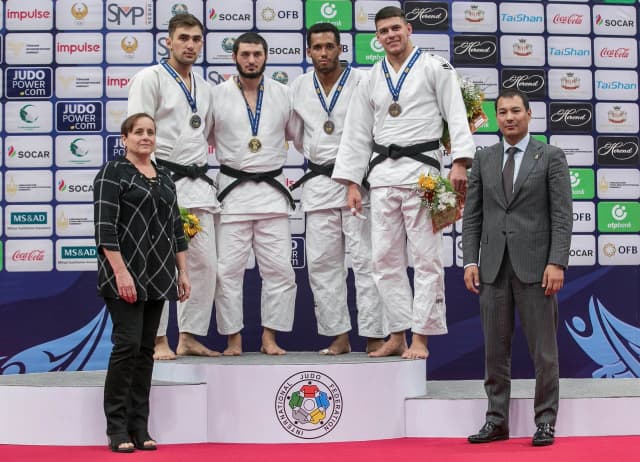 What a great way to finish the Tashkent Grand Prix 2019 edition on the match between the 2018 World Champion, Guram TUSHISHVILI (GEO), who remained on the disappointment of a missed 2019 World Championship campaign, and Bekmurod OLTIBOEV (UZB) supported by the whole public? After a little over 1 minute and despite the pressure put by OLTIBOEV, the Georgian had already taken the advantage of a waza-ari. A crowd totally crazy, a public chanting to support their protégé, and the latter found hidden resources to score, a waza-ari on both side. During the next cycle, on actions that could go at any time from one side or the other, TUSHISHVILI performed a complete rotation to annihilate the last golden hopes of OLTIBOEV, marking ippon on a sasae-tsuri-komi-ashi. TUSHISHVILI finds gold in Tashkent again. 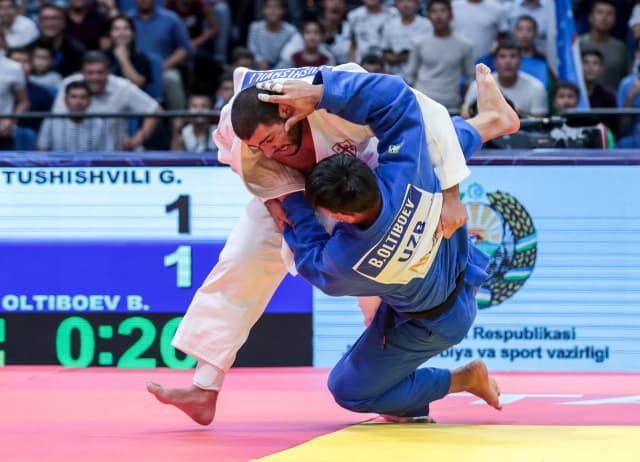 In spite of the total support of the public acquired to the cause of Alisher YUSUPOV (UZB), it is Stephan HEGYI (AUT) who won the bronze medal while immobilizing his opponent. 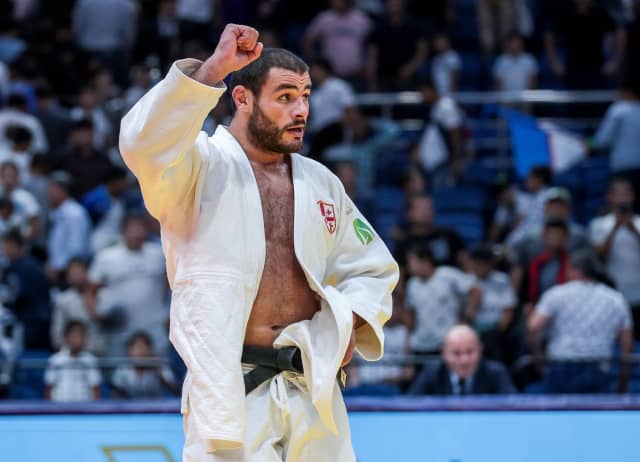 In the second contest for the bronze medal Temur RAKHIMOV (TJK) faced Yakiv KHAMMO (UKR). After scoring a waza-ari with a left-handed ippon-seoi-nage, the Ukrainian controlled the rest of the match to get on the podium of a Grand Prix for the sixth time. 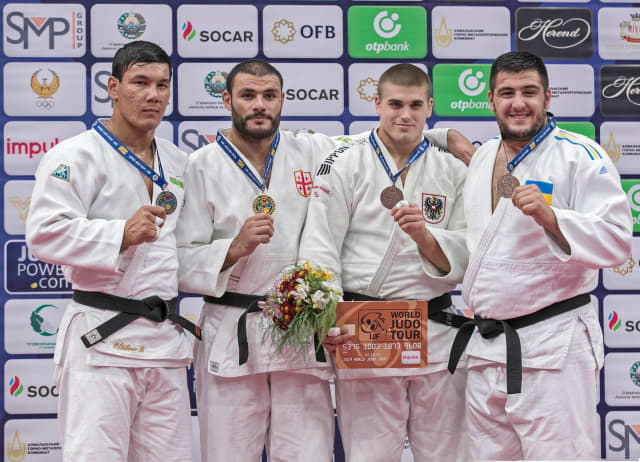 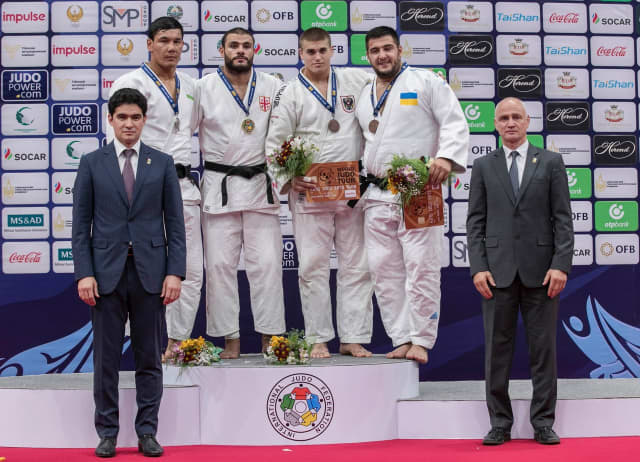 Outside the Mat
The Trumpet

Great Day for Uzbekistan
The 2-second Man and Co.