By Mark Pickering on 24. Oct 2019
Share
The five gold medals at stake on day one in Abu Dhabi were claimed by five different countries as the universality of judo was on show for the world to see. 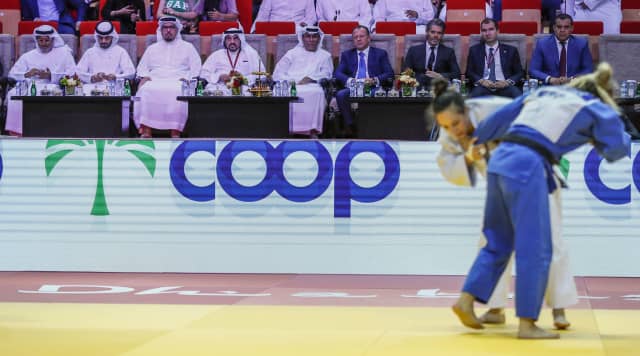 Double world champion Daria BILODID (UKR) won her third Grand Slam title in as many Grand Slam outings as the Ukrainian teenager was unstoppable in Abu Dhabi. European Games bronze medallist Marusa STANGAR (SLO), who holds a 2016 win over the prodigy, struggled to offer any resistance and could not escape a sankaku-gatame hold as BILODID rushed to glory in the first final of the competition. 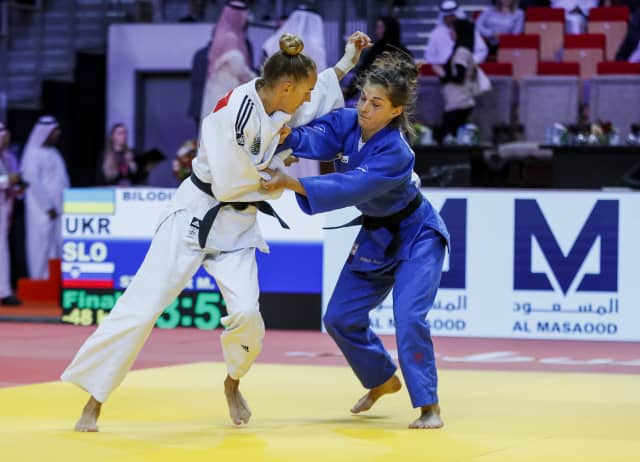 In the first semi-final BILODID pipped world number 21 Sabina GILIAZOVA (RUS) by a waza-ari score for a narrow victory as the Russian did well to take the contest the distance.

In the second semi-final world number 15 Laura MARTINEZ ABELENDA (ESP) was held down by STANGAR for 10 seconds in golden score to seal a place in the final.

The first bronze medal contest was won by world number 19 Katharina MENZ (GER) who dropped under MARTINEZ ABELENDA with 11 seconds left with a seoi-nage for a waza-ari score and her opponent had no time to respond in the opening contest of the final block.

The second bronze medal was won by Brasilia Grand Slam winner Catarina COSTA (POR) who outworked GILIAZOVA to secure a place on the podium in Abu Dhabi. COSTA broke the deadlock after just 22 seconds with a waza-ari score and did just enough to remain in front of her Russian opponent until the time ran out. 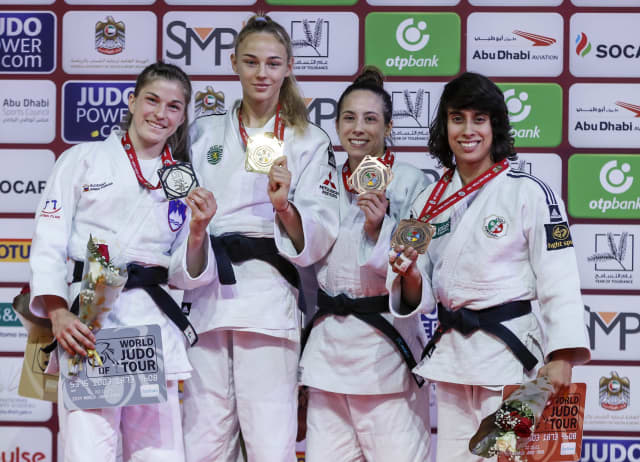 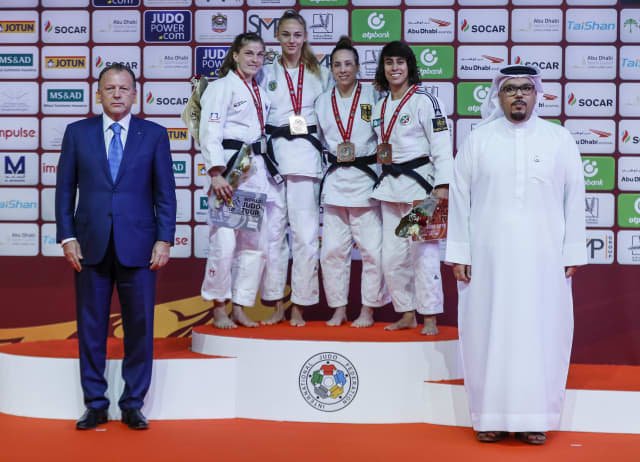 Olympic champion Majlinda KELMENDI (KOS) extracted a degree of revenge for losing the 2018 Abu Dhabi final against Olympic silver medallist Odette GIUFFRIDA (ITA) by beating her long-time rival to win the 2019 edition. KELMENDI extended her one-sided winning record over GIUFFRIDA to 7-2 by countering a desperate harai-makikomi effort after five minutes of golden score. Kosovo’s 10-time Grand Slam medallist is still getting back to her best form and was given a stern test by the game Italian who followed up on her Brasilia gold with hard-fought silver on day one in Abu Dhabi. 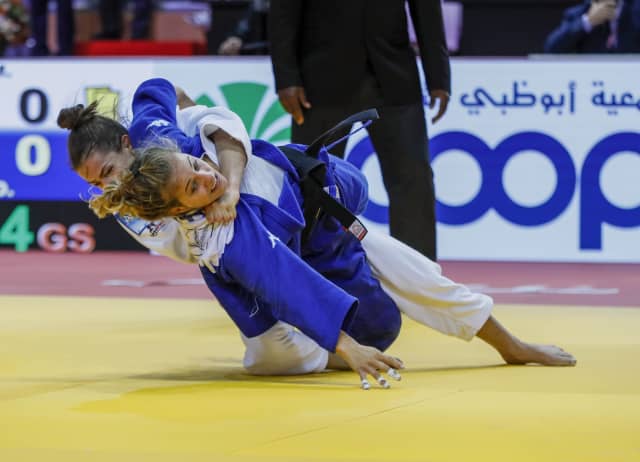 In the first semi-final KELMENDI was made to work by European Games bronze medallist Chelsie GILES (GBR) who narrowly lost out to Kosovo’s hero by a waza-ari score from a ko-uchi-gari.

The first bronze medal was awarded to world number 22 PARK Da Sol (KOR) who beat LOPEZ SHERIFF by a waza-ari score. PARK threw beautifully with a ko-uchi-gake for the one and only score of the contest.

The second bronze medal was won by GILES who defeated world number 44 Tetiana LEVYTSKA-SHUKVANI (GEO) to win her second Grand Slam medal. The 22-year-old Coventry Judo Club product looks set to break into the world’s top 10 in the near future and is now poised to make her Olympic bow in 2020. 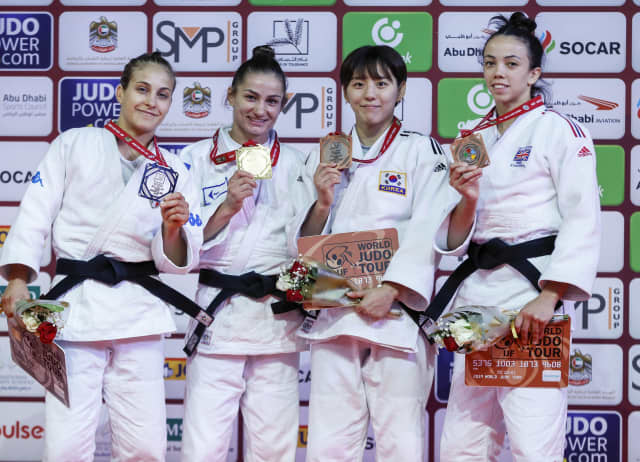 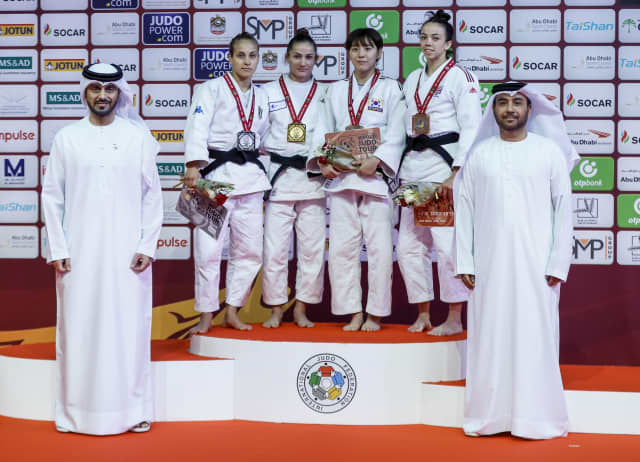 Hohhot Grand Prix winner KIM Jin A (PRK) won her second IJF title of the season with an impressive win over world number 16 Sarah Leonie CYSIQUE (FRA). KIM won four of her five contests by ippon to maintain a 100% winning record on the tour this year in addition to her continental championships win in April. The 23-year-old beat CYSIQUE in the final by a waza-ari score and could be a major contender at the upcoming World Judo Masters in December. 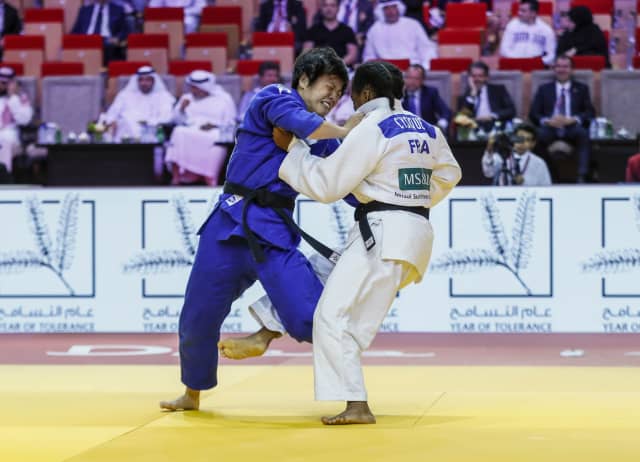 In the first semi-final former Zagreb Grand Prix silver medallist Diana DZHIGAROS (RUS) slipped to defeat against CYSIQUE by a waza-ari score but proved that she is durable at this level as the Russian entered the bronze medal equation while the French starlet moved into the gold medal contest. 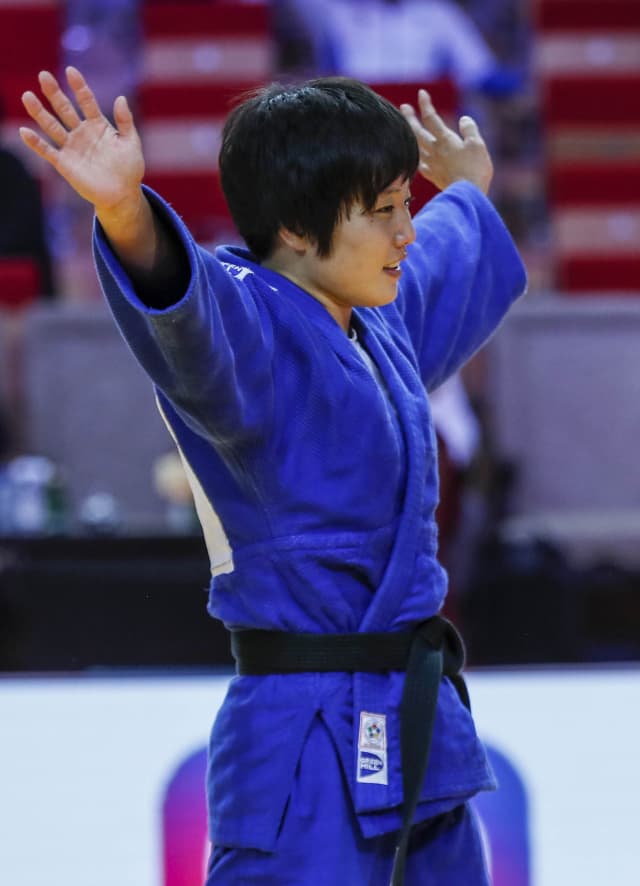 In the second semi-final KIM Jin A stunned world number 77 Alexandra-Larisa FLORIAN (AZE) by ippon after only 60 seconds to power into the final.

The first bronze medal was awarded to former Abu Dhabi Grand Slam winner KIM Jandi (KOR) who thwarted FLORIAN by throwing with a huge hane-goshi and then applied a kesa-gatame for 10 seconds to show her class of old.

The second bronze medal was won by DZHIGAROS who launched world number seven Theresa STOLL (GER) with a koshi-guruma after 11 seconds of golden score for a waza-ari to earn his first IJF medal since 2016. DZHIGAROS finally justified her continued selection by her country having failed to medal at her previous 13 IJF events since her silver medal at the 2016 Zagreb Grand Prix. The world number 58, who took silver at the 2015 Junior Worlds here in Abu Dhabi, could barely contain her excitement after surprising everyone by winning her second Grand Slam medal and winning four of her five contests in the UAE. 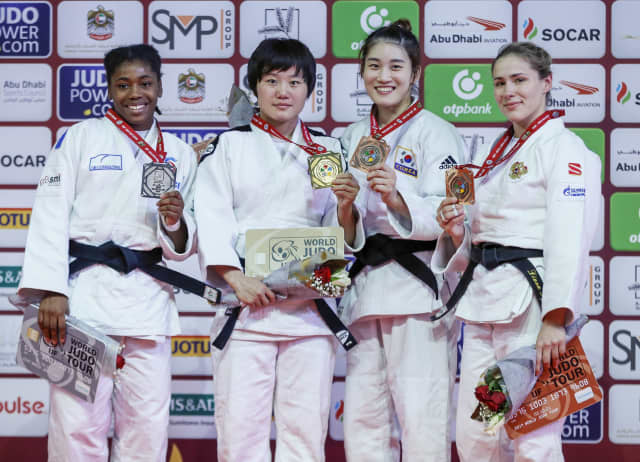 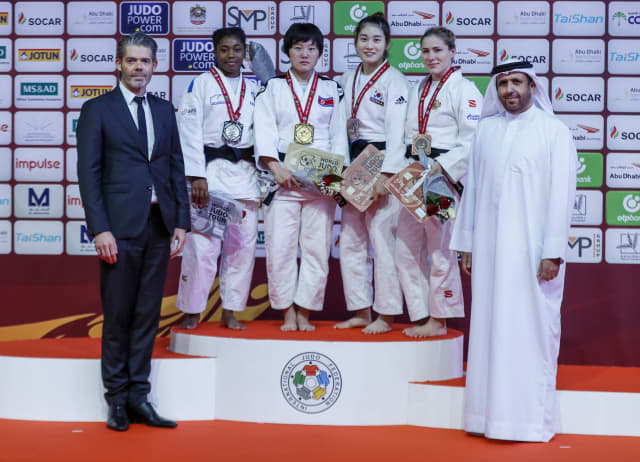 World number 11 Gusman KYRGYZBAYEV (KAZ) struck Grand Slam gold for the first time in his career as he won the first men’s final at the Abu Dhabi Grand Slam. The Kazakh finds himself behind teammate and former world champion Yeldos SMETOV on the IJF World Ranking List with the latter holding fourth place. KYRGYZBAYEV took top spot with the narrowest of wins over world number 19 Walide KHYAR (FRA) by way of a waza-ari score from a ko-soto-gake. KYRGYZBAYEV was dangerously close to picking up a third shido in the final minute but KHYAR did not muster enough attacks to merit a penalty for his adversary. 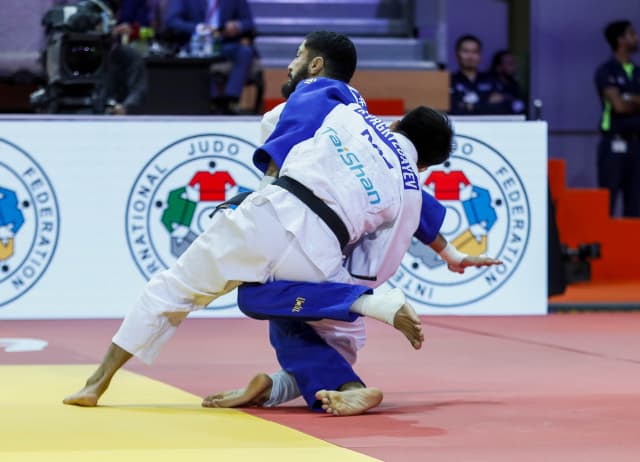 In the first semi-final Tashkent Grand Prix winner Yago ABULADZE (RUS) lost out to KYRGYZBAYEV by a waza-ari score as the Kazakh progressed to the final. 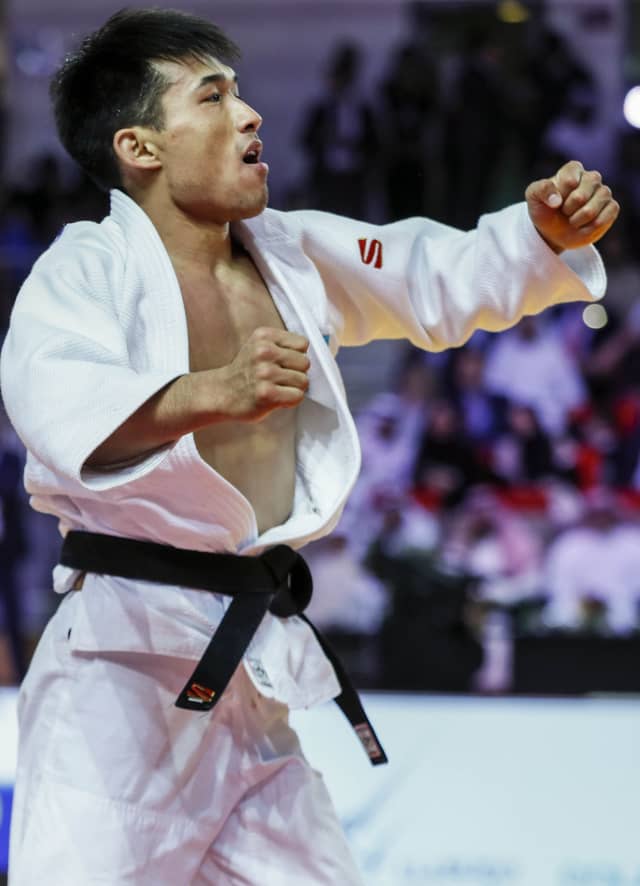 In the second semi-final KHYAR surprised Olympic bronze medallist Diyorbek UROZBOEV (UZB) as the European judoka prevailed over the Asian standout by coming up with a single waza-ari score which settled the contest after four minutes.

The first bronze medal was emphatically won by UROZBOEV who defeated four-time Grand Prix medallist Phelipe PELIM (BRA) with a ko-soto-gake for ippon.

The second bronze medal went to ABULADZE who triumphed over former world champion Yeldos SMETOV (KAZ) with a timely waza-ari score. The Russian threw with a low uchi-mata after a highly-competetive and highly-exciting contest which saw both men try to impose themselves in the contest with positive judo. 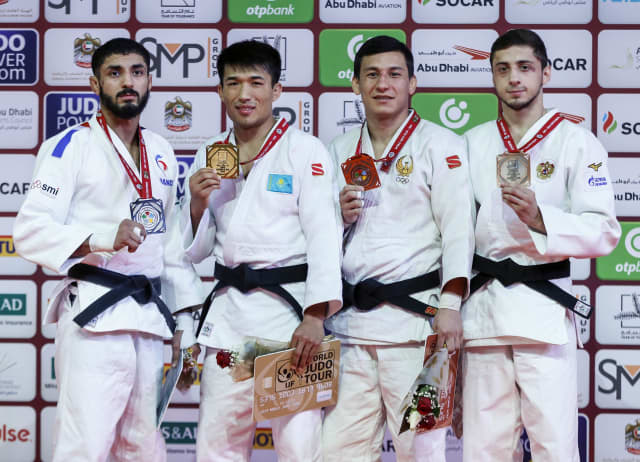 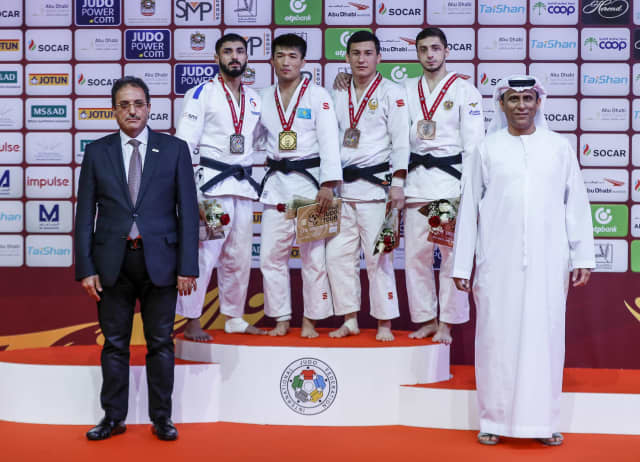 World number 10 Manuel LOMBARDO (ITA) won all five of his contests by ippon as he charged to his first Grand Slam title. The 20-year-old outperformed former World Judo Masters winner Orkhan SAFAROV (AZE) in the final as the Italian scored with a ippon-seoi-nage and a modified kata-guruma respectively to win by two scores without reply. LOMBARDO will now break into the world’s top 10 for the first time in his career while SAFAROV will be pleased and relieved in equal measure to return to an IJF medal podium for the first time since 2017 (world silver at -60kg). 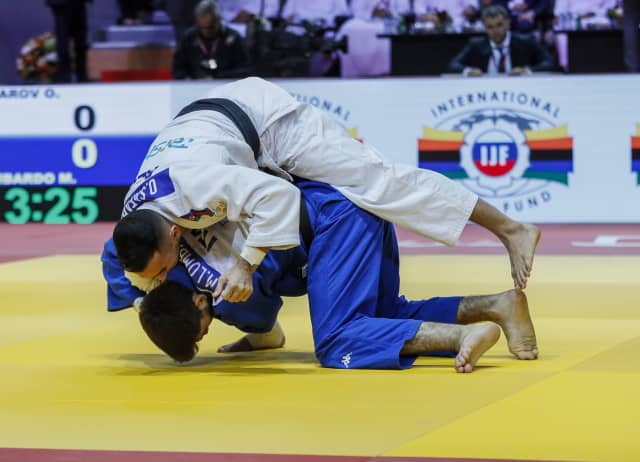 In the first semi-final Pan American Championships bronze medallist Orlando POLANCO (CUB) fell to SAFAROV by ippon as the Azeri overcome some issues with his judogi in the preliminaries to capture a place in the gold medal contest. 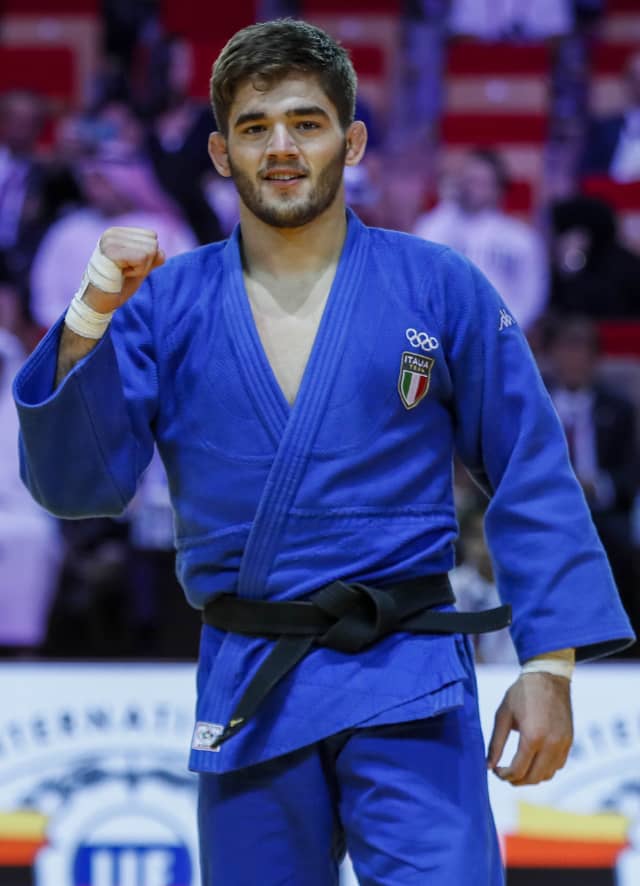 In the second semi-final Olympic silver medallist AN Baul (KOR) was halted by LOMBARDO who saw off the former world champion with an o-soto-gari for ippon.

The first bronze medal was won by AN on his second IJF outing this season as he conquered Zagreb Grand Prix winner Alberto GAITERO MARTIN (ESP) with a seoi-nage for a waza-ari score.

The second bronze medal went to POLANCO who caught the eye for Cuba as he beat seasoned campaigner and Mongolia’s household name in four-time Grand Prix winner GANBOLD Kherlen (MGL). POLANCO, who was competing in his first senior event outside Pan America, threw with an o-uchi-gari for a waza-ari score and pressured his Mongolian rival who picked up his third shido and received his marching orders. 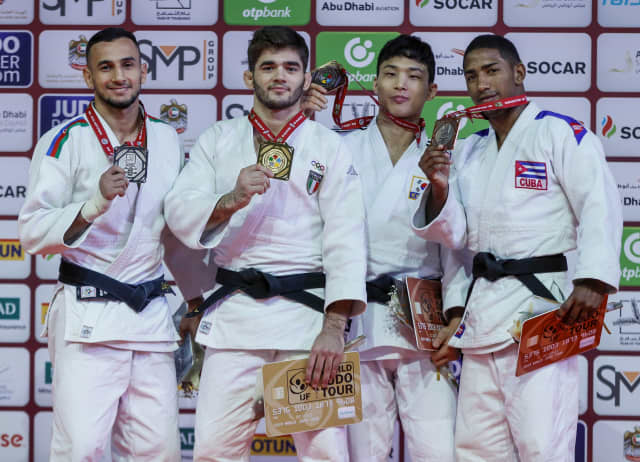 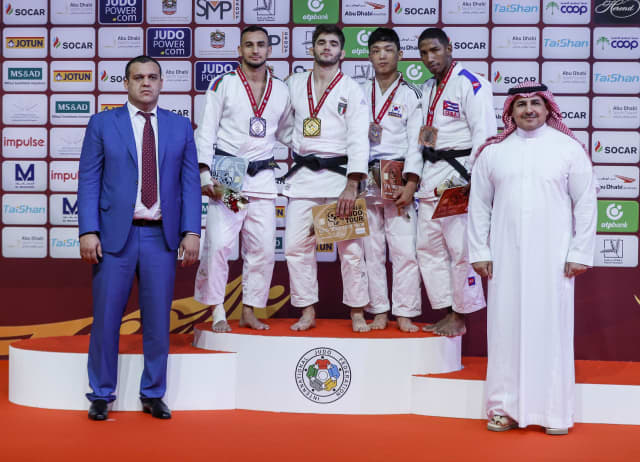