Guayaquil 2022: A Firework of Judo Techniques

Written by Nicolas Messner on 12. Aug 2022
Photographs by Gabriela Sabau
Share
For this third day of competition, the Japanese delegation completely disappeared, leaving the doors wide open for the other nations to go and win titles and medals. It's not that there were no Japanese judoka entered, it's just that they were defeated quite early in the elimination rounds. Gold went to Moldova, Spain and Uzbekistan, raising the number of countries with a gold medal already to 8 and 20 countries altogether with medals before the last day of individual competition. 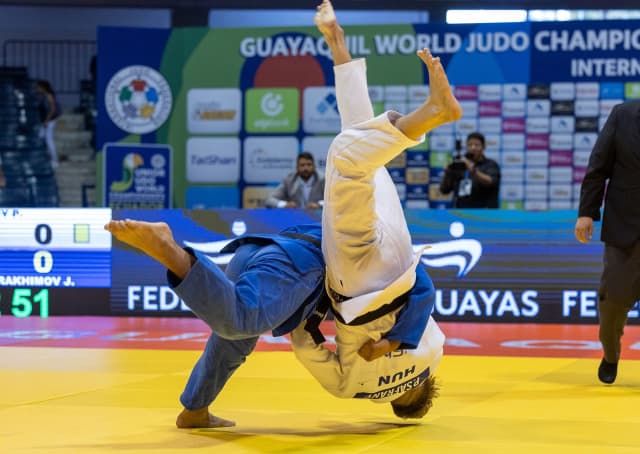 One of the most anticipated categories was the women's -70kg category as reigning world champion Ai Tsunoda Roustant was on hand to defend her gold medal from last year in Olbia. As soon as she arrived at the stadium, before the first hajime, Ai seemed calm and confident. She did not tremble for a single moment and won her second junior world title, taking her global gold medal tally to three, if we add the one obtained in the cadet age category.

Tsunoda Roustant will now be able to focus on seniors. We will find her in Tashkent in October and already we can say that she has the capacity to achieve a good performance there. We just have to wait and we look forward to it.

At -81kg, we were able to attend a dynamic and really pleasant competition, where surprises could happen at every turn. Above all we witnessed a beautiful final, during which the tactical aspect remained in the locker room, with the two athletes concentrating only on the best way to throw the other. This ended up happening in the most spectacular way, thanks to Mihail Latisev.

We also witnessed a very good final in the -90kg group during which Peter Safrany defended his title but Mamatrakhimov's trick in the air left him with no chance. What a technique!!! What a firework of techniques throughout the day.

For the fourth day of competition, four categories will be in action: women -78kg and +78kg, men -100kg and +100kg. Preliminary rounds will begin at noon and the final block will commence at 16:00.