Osaka Grand Slam winner ONO Yoko (JPN) defeated Hohhot Grand Prix winner NIIZOE Saki (JPN) with one of the throws of the day to capture her fifth Grand Slam title. ONO, who almost scored at will in the preliminaries with her lethal uchi-mata, caught her colleague in golden score with a textbook ippon-seoi-nage which was lapped up by the appreciative crowd. 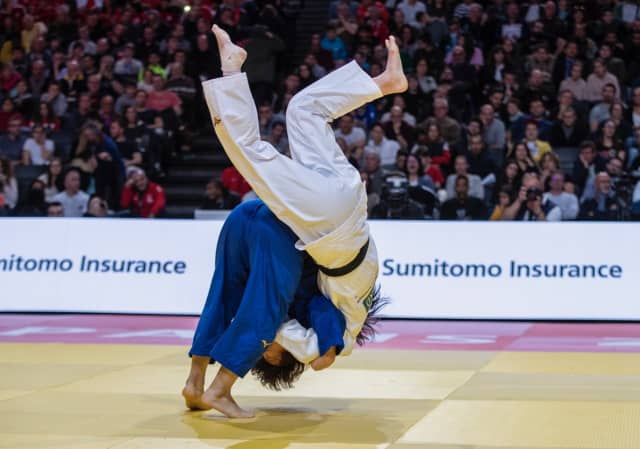 The pair shared a light hearted moment at the end of the contest as ONO forgot which side of the contest area she needed to line up on to be awarded the contest. After a quick shuffle, the smiling referee signalled white to his right and blue to his left as the Japanese finalists hurried to their correct spots before both respectively performing a typically deep and meaningful bow to one another. 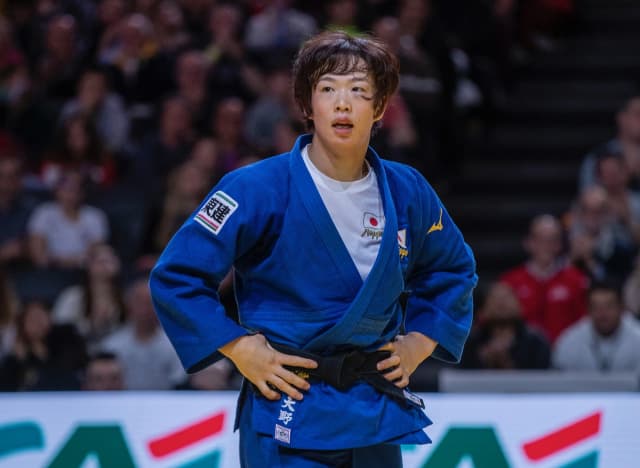 In the first semi-final world champion Marie Eve GAHIE (FRA) slipped to a humbling defeat at the hands of NIIZOE who threw for ippon with her trademark uchi-mata with 60 seconds left on the clock.

In the second semi-final world silver medallist Barbara TIMO (POR) was held down by ONO with a yoko-shiho-gatame for 20 seconds and ippon.

The first bronze medal was won by Brasilia Grand Slam bronze medallist Gemma HOWELL (GBR) after TIMO was penalised for a false attack in the fourth minute of golden score to result in a hansoku-make as it was her third offense.

The second bronze medal contest featured GAHIE but the home star suffered her second defeat in as many contests after European Games bronze medallist Anna BERNHOLM (SWE) locked on a juji-gatame to force her opponent to submit at the halfway point. 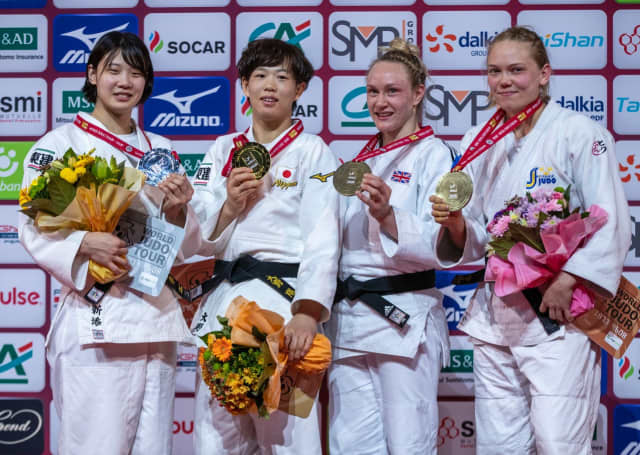 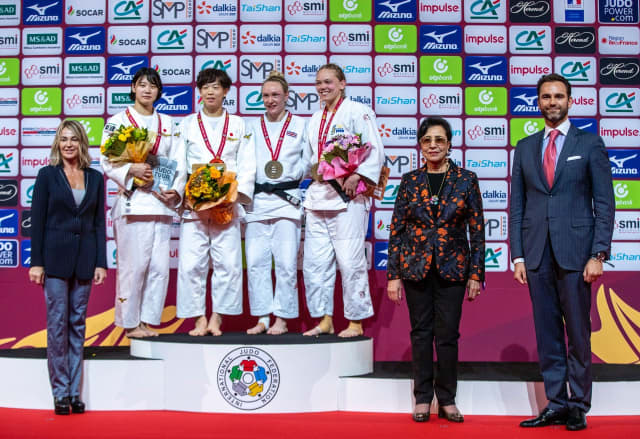 -78kg: MALONGA beats understudy to all but secure Olympic selection

World champion Madeleine MALONGA (FRA) defeated World Judo Masters winner Fanny Estelle POSVITE (FRA) in a disappointing final as both judoka cancelled each other out and were reluctant to take any risks. World number one MALONGA retained her Paris title by seeing off world number 13 POSVITE, who moved up from -70kg to -78kg a year ago, on shidos to the frustration of the home crowd. The red backpatch owner of the -78kg category will be unperturbed by the manner of her win while POSVITE will wonder what could have been after a meteoric rise over the last 12 months in the heavier division. 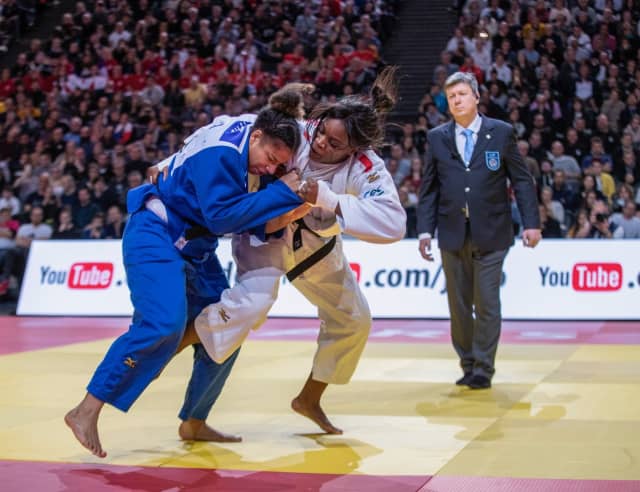 In the first semi-final MALONGA ousted teammate and former world champion Audrey TCHEUMEO (FRA) with ease in a passing of the torch. TCHEUMEO was dismissed by ippon from a forceful o-soto-gari just 28 seconds into the contest. 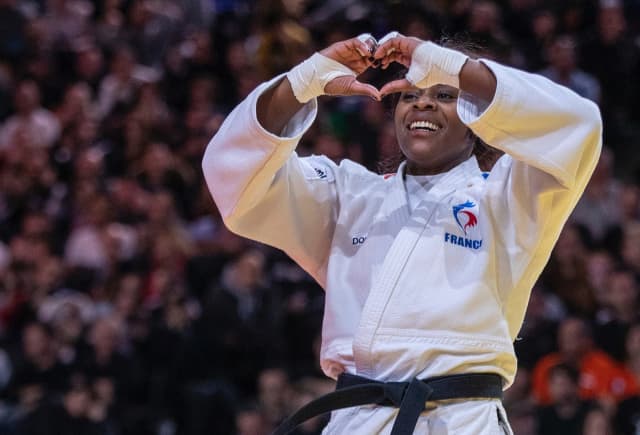 In the second semi-final Abu Dhabi Grand Slam gold medallist Klara APOTEKAR (SLO) had to submit to the in-form POSVITE on the edge of the area from a juji-gatame.

The first bronze medal was claimed by former world champion UMEKI Mami (JPN) as her scheduled opponent APOTEKAR could not compete due to injury.

The second bronze medal contest featured TCHEUMEO and former world bronze medallist Kaliema ANTOMARCHI (CUB). TCHEUMEO, who has slipped to being her country’s number three in one of their strongest categories, was outworked and outfoxed by the Cuban who scored a waza-ari from an o-uchi-gari waza-ari with 60 seconds left and was never troubled by her lauded French rival. 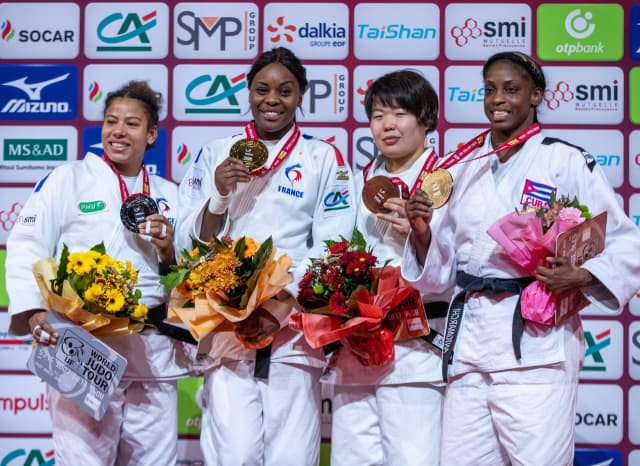 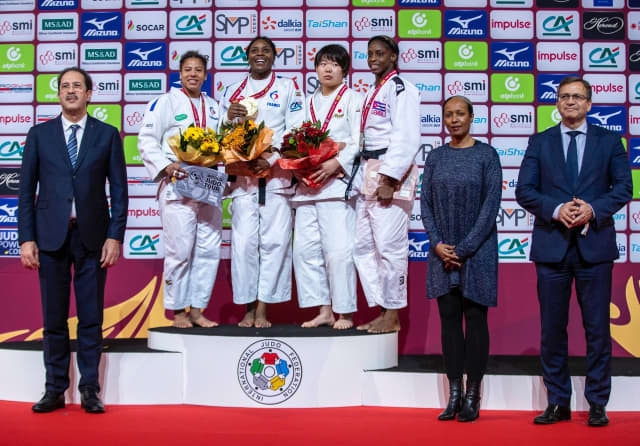 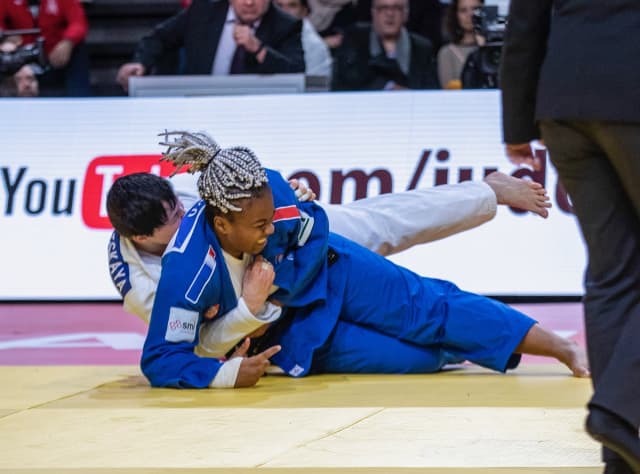 The 20-year-old hotshot, whose progress was halted through injury in 2019, is now well on her way to her first Olympic Games and will be targeting a seeded spot. DICKO overpowered SLUTSKAYA, 28, from the outset and brought the crowd to their feet with an enormous makikomi for ippon. One-time Grand Slam champion SLUTSKAYA could not deal with the physical attributes of the young Frenchwoman who has now struck gold at both IJF events in 2020. 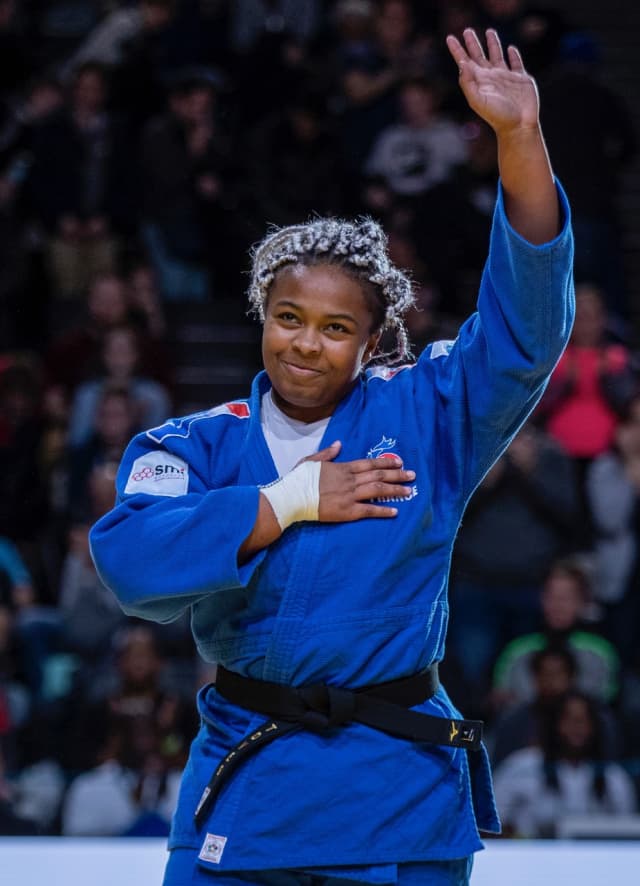 In the first semi-final world number 16 Rochele NUNES (POR) was thrown and held down by SLUTSKAYA who charged into the women’s heavyweight gold medal contest.

The first bronze medal was claimed by SOUZA who launched world number 39 Sonia ASSELAH (ALG) after 45 seconds with a harai-goshi for ippon to step closer to making her Olympic debut in Japan.

The second bronze medal contest was won by NUNES who had to come from behind to beat world number 10 Nihel CHEIKH ROUHOU (TUN). Former Brazil international NUNES went behind to a waza-ari score from a harai-makikomi but restored level terms with an uchi-mata and then registered a buzzer-beating o-uchi-gari for a waza-ari score. 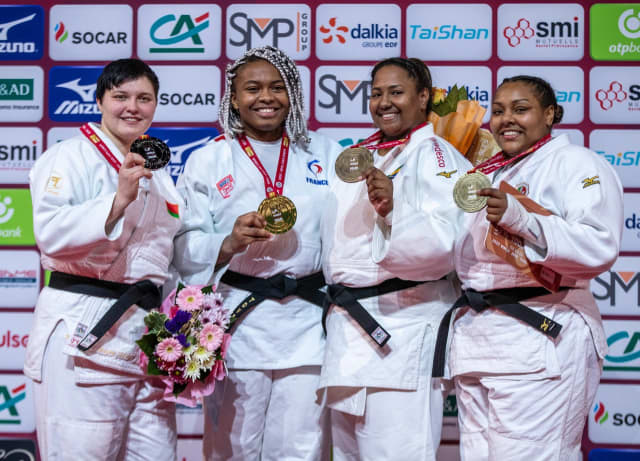 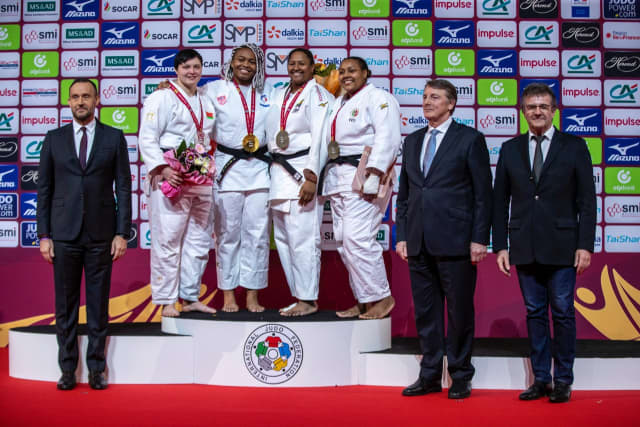 World silver medallist Matthias CASSE (BEL) ruled the -81kg category in Paris with a tactically astute showing against Tashkent Grand Prix winner Sharofiddin BOLTABOEV (UZB) in the final. The high-quality Belgian judoka had enough nous and power to contain the Uzbek who was penalised for the third and final time after one minute of golden score to receive hansoku-make. 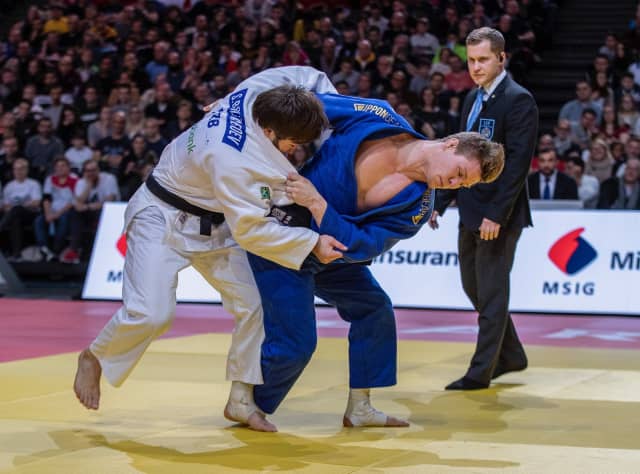 World Judo Masters champion CASSE has now won IJF gold in consecutive events for the first time in his flourishing career and will be one of the favourites in Tokyo this summer while BOLTABOEV will be pleased to have opened his Grand Slam medal account in the French capital and to have bolstered his place within the world’s top-ranked judoka. 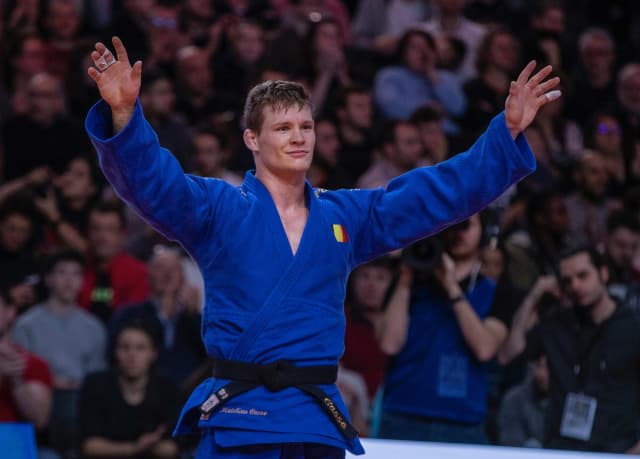 In the first semi-final BOLTABOEV reigned over former world silver medallist FUJIWARA Sotaro (JPN) who picked up his third shido with 11 seconds remaining in their previously scoreless contest.

In the second semi-final CASSE threw world number 16 Anri EGUTIDZE (POR) with te-waza for a waza-ari score and then secured the sankaku-gatame to wrap up a comprehensive win.

The first bronze medal was clinched by London 2012 Olympic bronze medallist Antoine VALOIS-FORTIER (CAN) after EGUTIDZE was disqualified after two and a half minutes of golden score after dropping and picking up his third shido.

The second bronze medal was won by FUJIWARA who sent world number 29 Kamoliddin RASULOV (UZB) over after three minutes of additional time with a neat ashi-waza move as he finally unlocked the defence of the durable Uzbek. 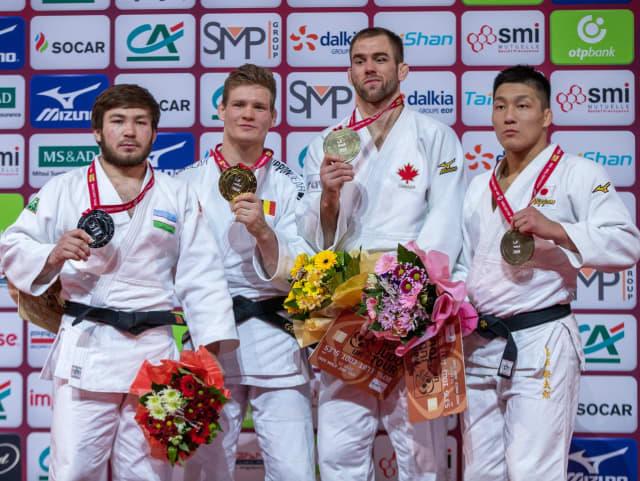 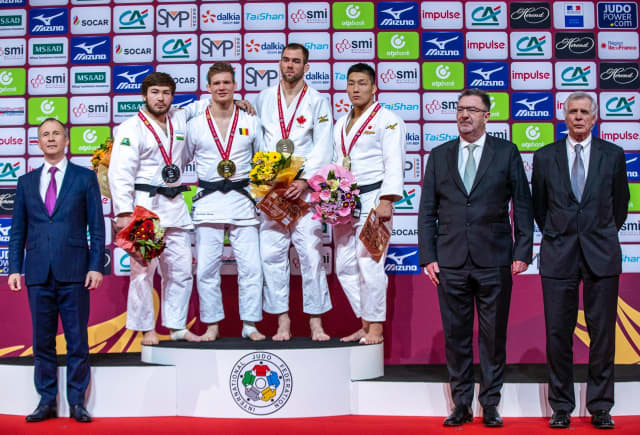 Former world champion Nikoloz SHERAZADISHVILI (ESP) won his first Paris Grand Slam title as he surged past former world bronze medallist NAGASAWA Kenta (JPN). World number one SHERAZADISHVILI launched NAGASAWA with a gigantic o-goshi as the Japanese judoka must have felt like he was in the air for a lifetime before being sent over for ippon. 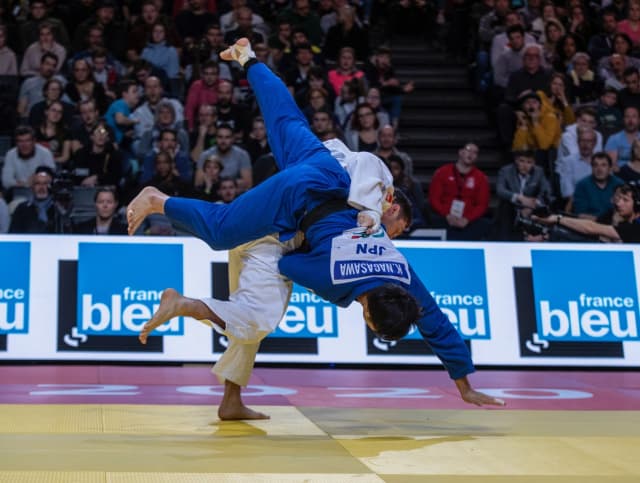 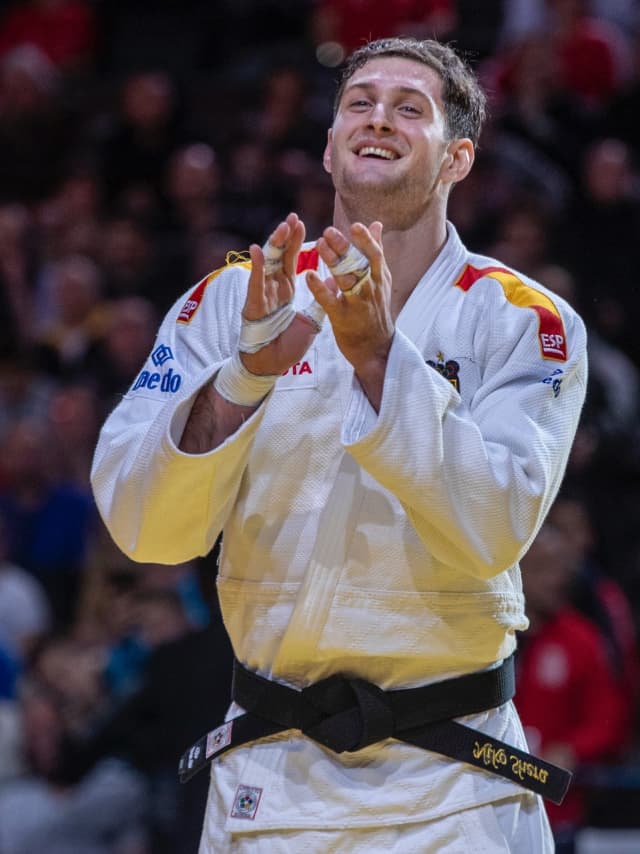 In the second semi-final world champion Noel VAN T END (NED) fell to NAGASAWA in golden score after picking up his third shido for going out of the area.

The first bronze medal was won by double world bronze medallist Axel CLERGET (FRA) who somewhat fortuitously triumphed over VAN T END. CLERGET and VAN T END were tied up on the edge of the area and the Dutchman was elected to have stepped out which resulted in his third shido and saw the Frenchman crowned the victor.

The second bronze medal went to former world silver medallist Ivan Felipe SILVA MORALES (CUB) who dispatched MEHDIYEV after 90 seconds of golden score. SILVA MORALES was the busier of the two judoka and attacked with a uchi-mata and an o-soto-gari as he unsettled the Azeri and eventually forced him over for a contest-winning score. 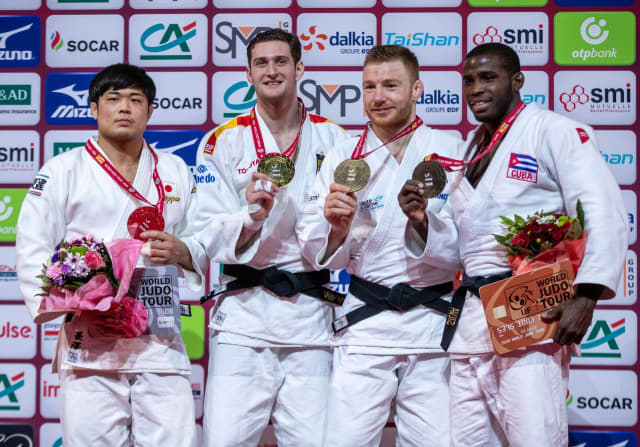 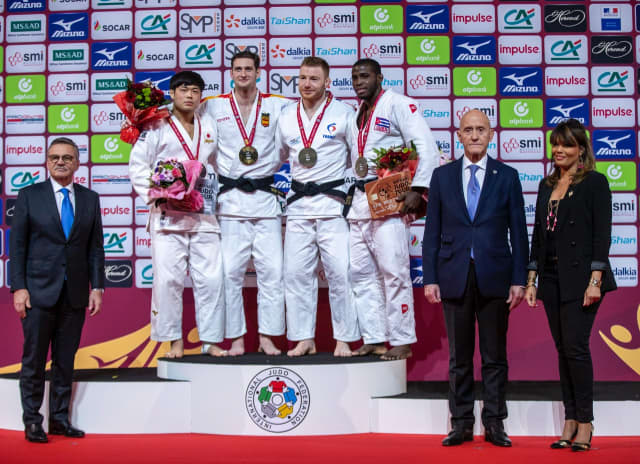 World number six Peter PALTCHIK (ISR) narrowly defeated Olympic silver medallist Varlam LIPARTELIANI (GEO) in a closely contested -100kg final. The Georgian star, who had his family in the crowd waving their country’s unmistakable flag, came up just short in his quest to win the Paris major for a fourth time as he was penalised for diving after being unsuccessful with an uchi-mata attack to hand the title to Israel’s PALTCHIK. LIPARTELIANI, who claimed gold here in 2013, 2015 and 2019, rued the outcome but as always kept his cool and congratulated his adversary and showed why he is such a popular champion after 12 years at the summit of the sport. 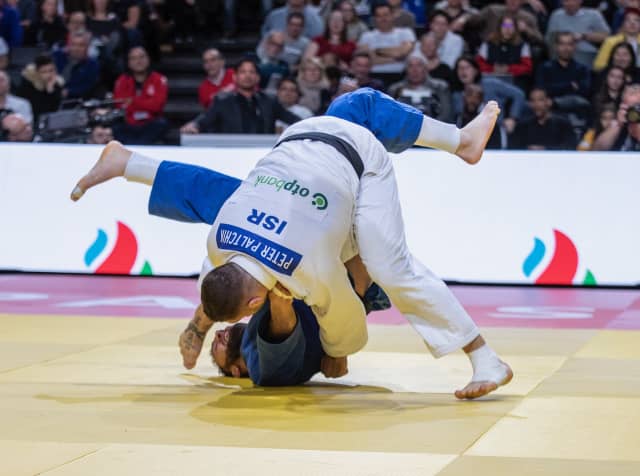 In the first semi-final Tel Aviv Grand Prix winner PALTCHIK defeated world number one Michael KORREL (NED) after the Dutchman was penalised for a gripping infringement during golden score which was his third indiscretion and relegated him to a bronze medal contest. 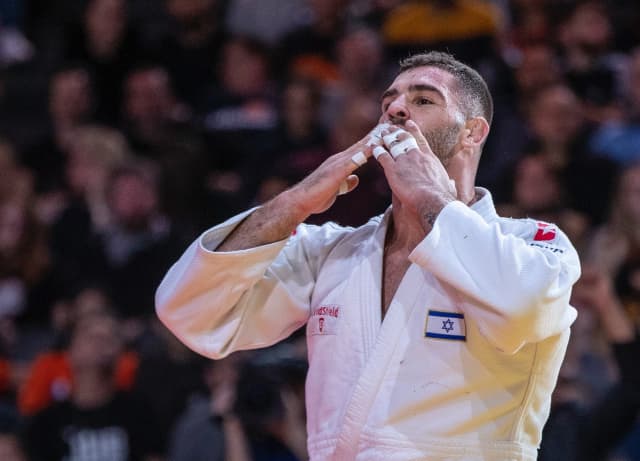 The first bronze medal was won by ADAMIAN who used all his bulk and brute strength to pin down world number eight Shady ELNAHAS (CAN) for 20 seconds and ippon after the Canadian had failed with a harai-goshi effort.

The second bronze medal went to KORREL who dropped under world number 41 and surprise package Bojan DOSEN (SRB) after 41 seconds of golden score to earn a waza-ari score and his sixth Grand Slam medal. 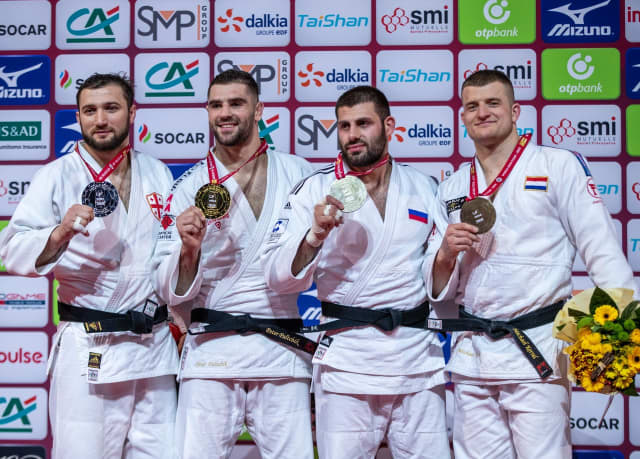 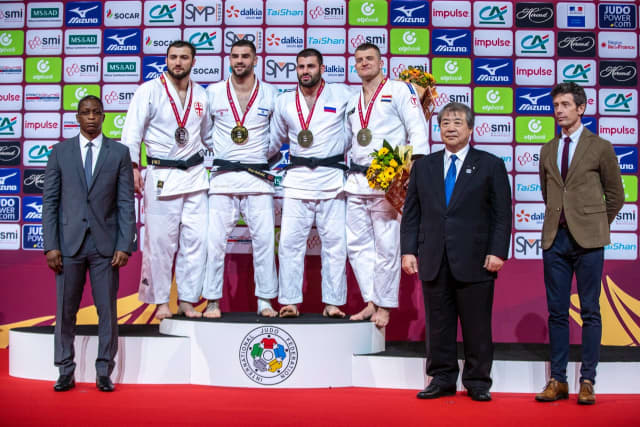 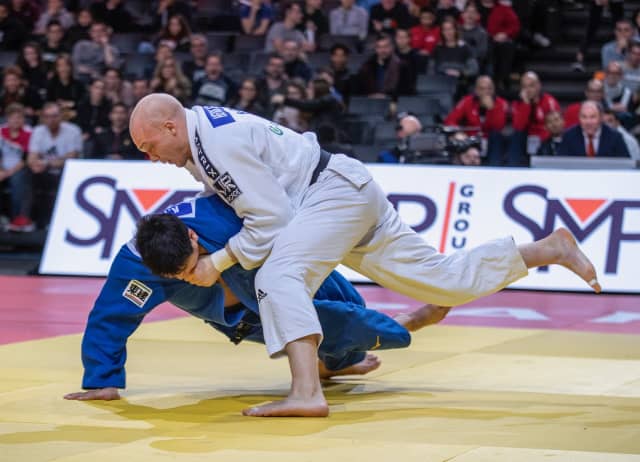 KAGEURA handed French giant Teddy RINER his first loss in a decade in round three and seemed on course for gold only for Dutchman GROL to claim the spoils and to take some of the shine off the Japanese heavyweight’s famous win over the 10-time world champion.

Double Olympic bronze medallist GROL claimed his first IJF gold medal since winning the 2018 Osaka Grand Slam by catching a shell-shocked KAGEURA with his trademark ashi-waza as a ko-uchi-gari floored the history-making Japanese who endured the most eventful day of his career to say the least. GROL revived his Tokyo 2020 Olympic bid after teammate and top seed Roy MEYER (NED) finished seventh as the unfancied 34-year-old veteran fell to his knees and kissed the tatami after his score was upgraded from waza-ari to ippon upon a video review. 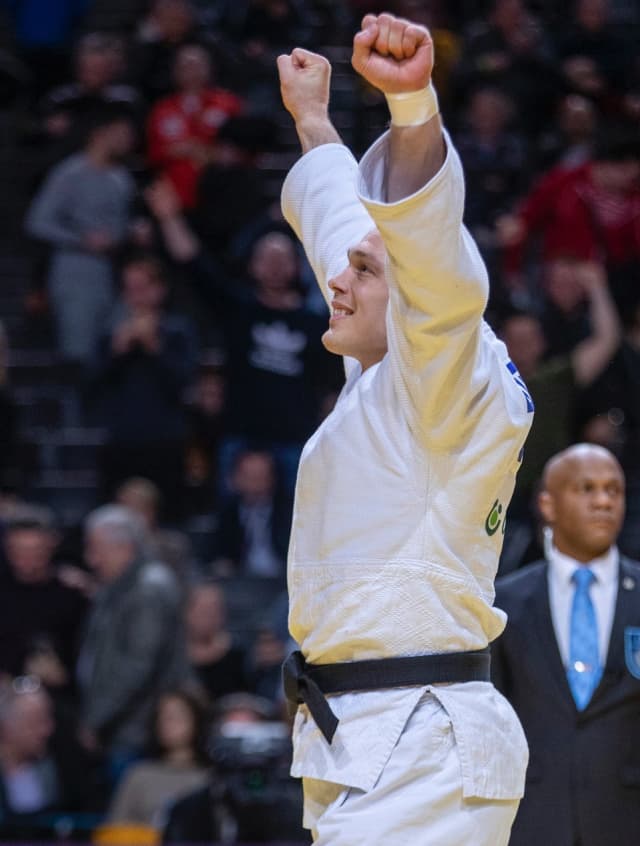 In the first semi-final GROL profited from a wasteful outing by Zagreb Grand Prix winner Gela ZAALISHVILI (GEO) who was guilty of being passive and was reprimanded for the third and final time with 27 seconds remaining.

In the second semi-final double Olympic bronze medallist Rafael SILVA (BRA) lost out against KAGEURA by a waza-ari score after 31 seconds of golden score.

The first bronze medal was won by world number 25 Andy GRANDA (CUB) who downed Brazilian man-mountain SILVA after two minutes of golden score with an o-uchi-gari for a medal-winning waza-ari score which reenergised the crowd ahead of the men’s +100kg final.

The second and last bronze medal contest saw ZAALISHVILI lose his concentration on the ground and Osaka Grand Slam gold medallist Inal TASOEV (RUS) showed his experience by taking full advantage as he applied an armlock for ippon. 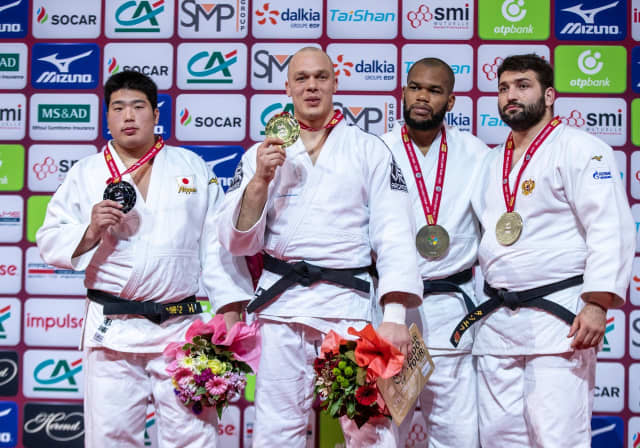 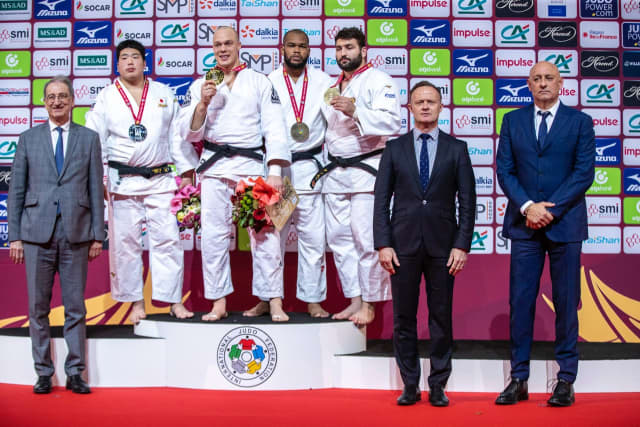