Written by Nicolas Messner, Gabriela Sabau, Emanuele Di Feliciantonio on 19. Oct 2019
Share
After a start of the championship in half-tone, Japan shined again on the fourth day of the Junior World Championships. Everything is relative, of course, especially when it comes to Japan. Second nation at the start of the last day of the individual tournament, behind Georgia, the Country of the Rising Sun placed an athlete in each final of the four categories of the day, and won all four gold medals, for a finish in apotheosis. 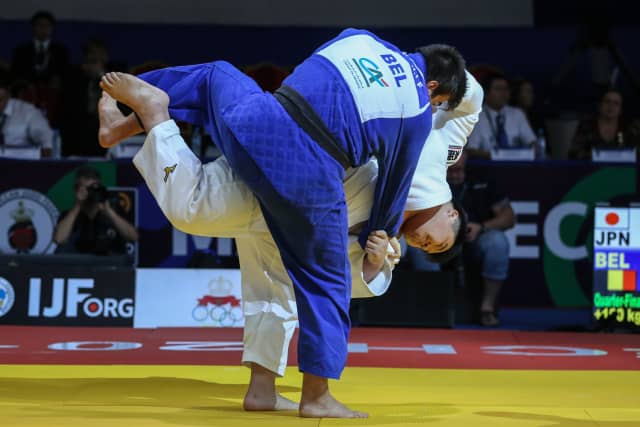 Japan ends up with six gold medals, ahead of Georgia with three gold medals, which is a very good performance in itself. In all, 20 countries leave Marrakech with a medal and 39 countries placed at least one athlete in the final block, out of a total of 81 delegations.

Starting tomorrow, the counters will be reset with the mixed team tournament. If Japan is obviously the grand favorite, with what some nations have shown during the week, everything is possible.

At the end of the first category of the day, Renee VAN HARSELAAR (NED), ranked only fifth of the last European Junior Championships, managed to reach the final against the Japanese and defending world title holder, WADA Rinoko (JPN). For four minutes, the two left-handers neutralized themselves, forced to decide the winner in the Golden score. It took only a few seconds of additional time for WADA to launch an o-soto-gari which was rewarded with a waza-ari, giving a little air to the Japanese delegation at the top of the ranking by nation. 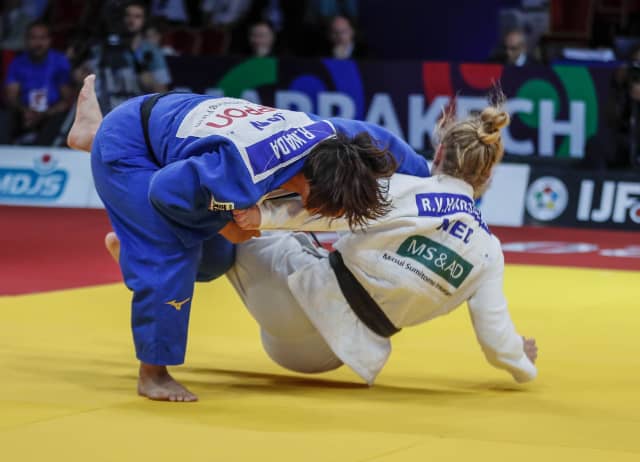 The first bronze medal contest saw the Junior European bronze medallist, Daria KARIAKINA (RUS) facing Christina FABER (GER), winner of the recent Bratislava Senior European Cup (Sept. 2019). FABER quickly scored a waza-ari but that was cancelled after being reviewed with the support of the video refereeing. Later on, she scored an indisputable waza-ari with a massive kochi-waza technique and only a few seconds later she doubled the mark to win the bronze medal. 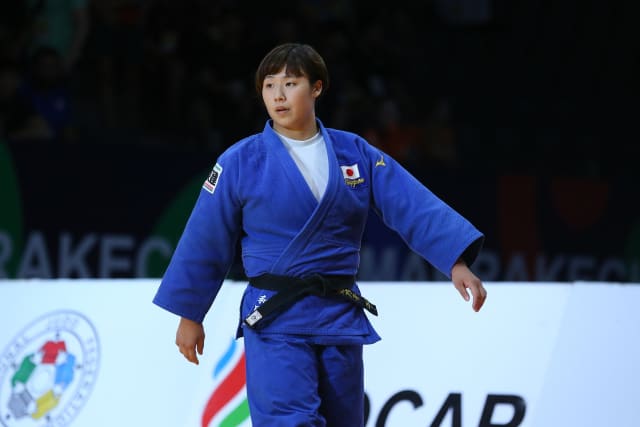 It was a 100% European match for the second bronze medal in the category, as Petrunjela PAVIC (CRO), a European junior bronze medalist, was opposed to Patricia SAMPAIO (POR), to whom the recent performances of the Portuguese athletes at the world championships in Tokyo, gave ideas of world medal. PAVIC couldn't get any chance, as the Portuguese scored an impressive ippon with a powerful makikomi. 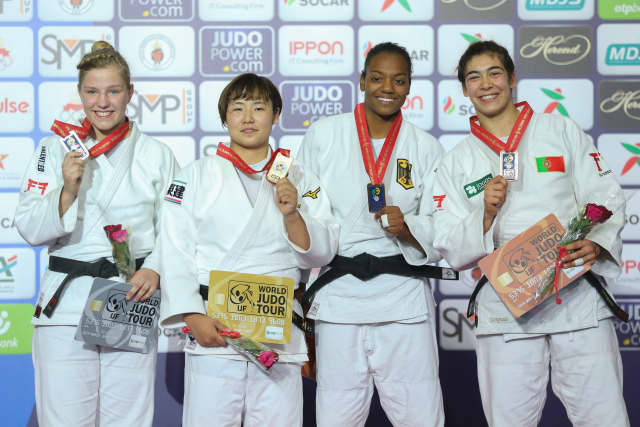 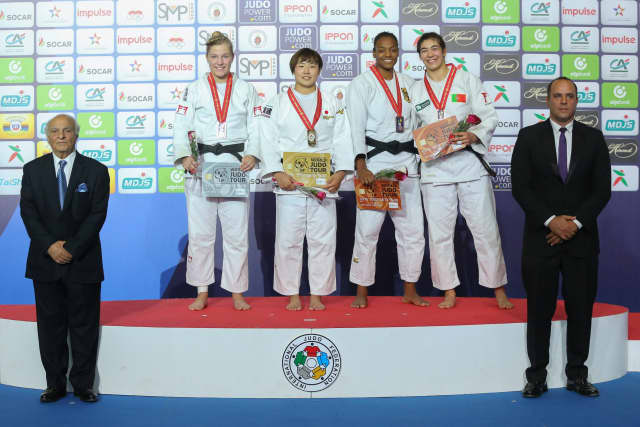 +78kg: One more Gold for Japan with TAKAHASHI 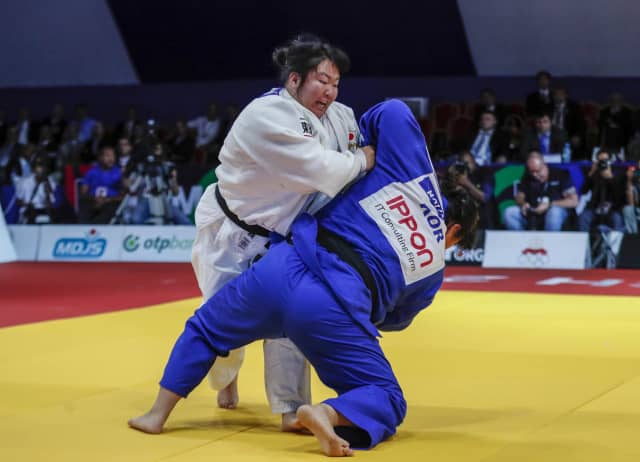 In a fairly classic left-handed battle, the two athletes tried unsuccessfully to find an opportunity to throw, until KIM scored a first waza-ari on shoulder movement. But the Japanese machine then set in motion and penalty after penalty, TAKAHASHI made up the difference to finally make her opponent disqulified, garnering an other gold medal for Japan. 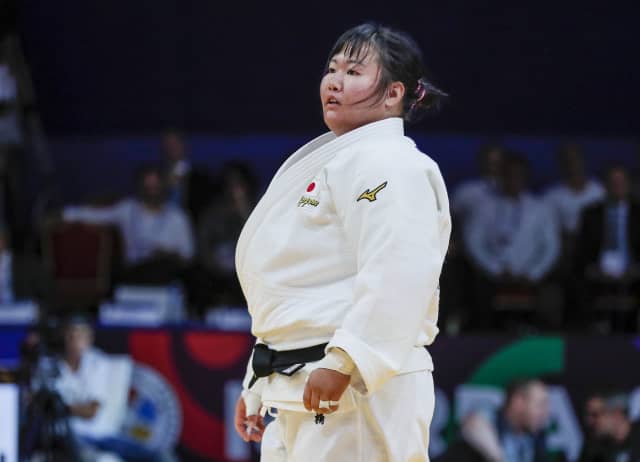 For the first bronze medal, we saw a fratricidal match between the two French athletes, Tahina DURAND (FRA) and Léa FONTAINE (FRA). With two waza-ari, the second being scored with a o-soto-gari, DURAND didn't give any chance to her teammate to step on the podium.

In the second bronze medal contest, Kubranur ESIR (TUR) faced the Junior European Championships bronze medallist, Marit KAMPS (NED), who took the lead with a first waza-ari, followed by an immobilisation, but not long enough to score. KAMPS dedicated the remaining time to saving her result, which she could do despite the pressure she was under. 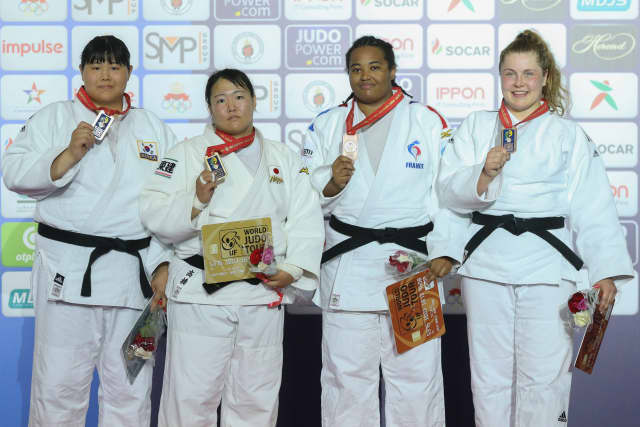 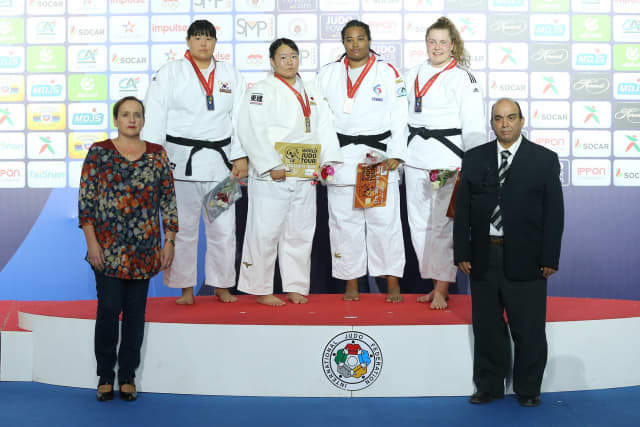 Everyone was expecting to see the defending world junior champion, Gela ZAALISHVILI (GEO), in the final, but he was quickly eliminated by MATSUMURA Sosuke (JPN), on a superb ura-nage during the preliminary rounds. It was not even MATSUMURA who qualified for the final, but KAMIGAKI Kazunari (JPN). As one Georgian can always hide another one it is Ilia SULAMANIDZE who was competing for the gold medal of the category. 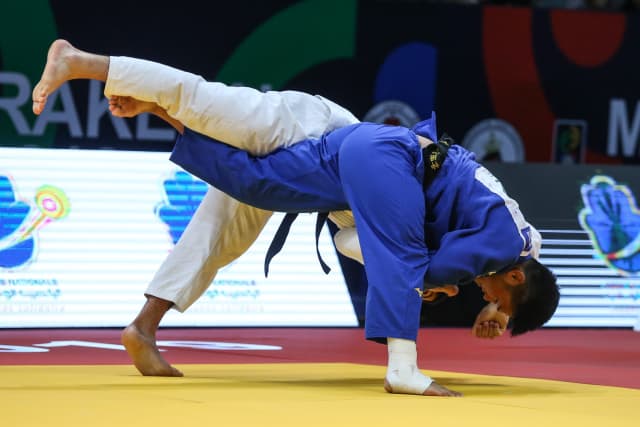 This final was quite symbolic of the peaceful battle that Japan and Georgia were leading at the top of the nation standings, and it gave an idea of the intense matches in the team tournament that will take place during the final day of competition. While SULAMANIDZE seemed, without having scored yet, to dominate his opponent, the Japanese gradually took the ascendancy to score a first waza-ari, which he followed on the ground with an immobilization but not long enough to score. All was not written yet. A few seconds from the end, the Georgian scored on a desperate shoulder movement. In the golden score, KAMIGAKI scored the second liberating waza-ari. 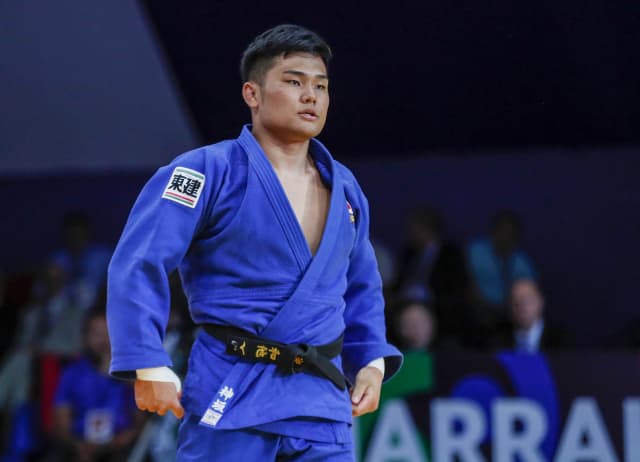 The first bronze medal match opposed Mathias MADSEN (DEN), seventh of the last Junior European Championships, and Mert SISMANLAR (TUR), fifth at the last Universiade in Naples, this summer. After a superb left-handed uchi-mata for ippon, SISMANLAR could let his joy explode.

The second bronze medal contest opposed the bronze medallist of the Junior European Championships Zsombor VEG (HUN) and the 2018 Cadet European champion, Matvey KANIKOVSKIY (RUS). The contest was very short. After a missed attempt to score with a sumi-gaeshi on the edge of the tatami, VEG didn't lose the control and immediately followed with a shime-waza technique for ippon. 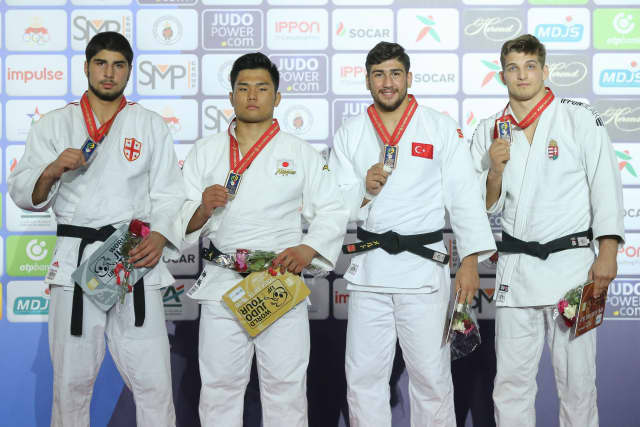 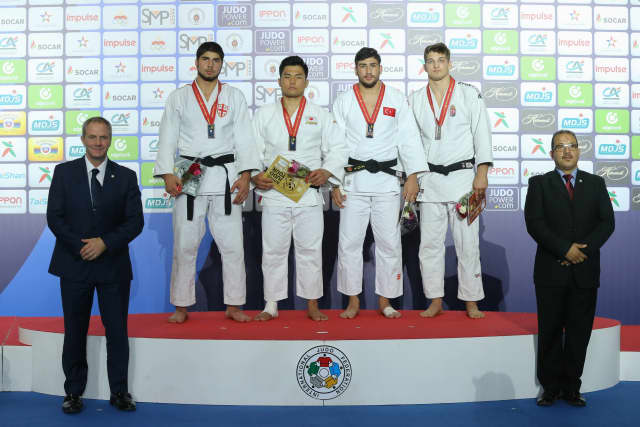 The last final of the day and of the individual tournament opposed the silver medallist of the Junior Asia-Oceania Championships, MATSUMURA Sosuke (JPN), and the silver medallist of the junior European Championships Erik ABRAMOV (GER). Not impressed by the already consistent harvest of the day for the Japanese team, and by the difference in weight, ABRAMOV bravely tried his luck, but, without having anything to regret, he finally succumbed to the attacks of MATSUMURA, who scored waza-ari before concluding with an immobilization. 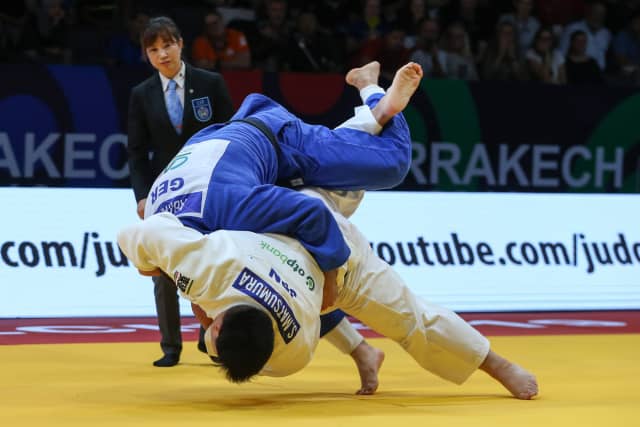 In the first bronze medal contest Edouard CAPELLE of Belgium was facing the bronze medallist of the last Junior Europeans SIPOCZ Richard (HUN). Only a few seconds were necessary for SIPOCZ to score a classic left handed uchi-mata for a clear ippon. 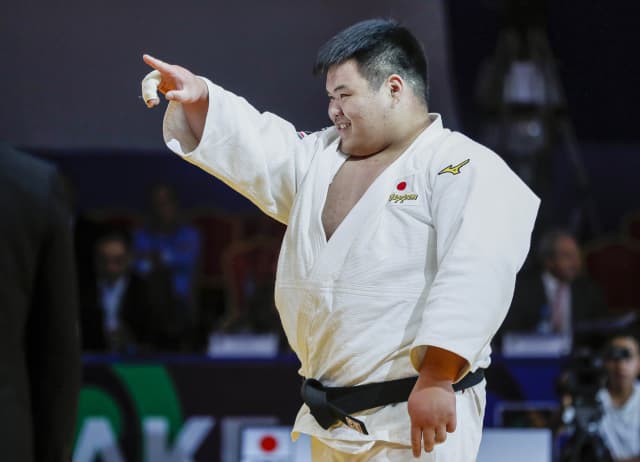 The second and last bronze medal contest saw KIM Minjong (KOR), bronze medallist of the last World Championships in Tokyo, and Luka LOMIDZE (FRA) facing for the last spot on the podium. Taking his time to put his hands on the judogi and to put his opponent in the ideal position to launch his shoulder movements, the senior world medalist finally found the solution and threw LOMIDZE for a waza-ari, concluded immediately with an immobilization for ippon. 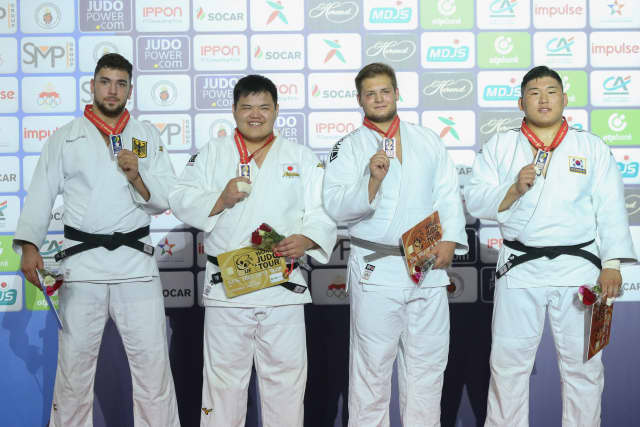 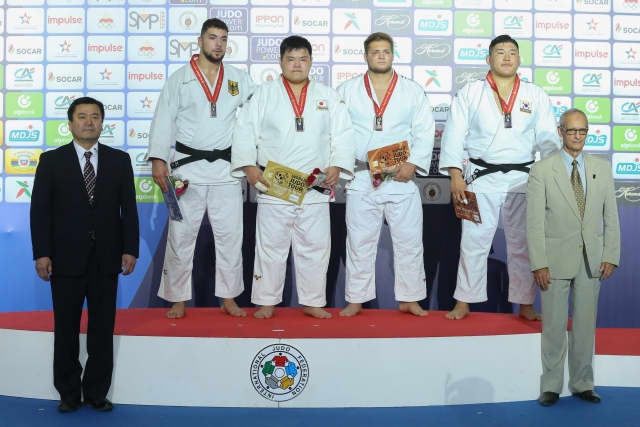 Words From The Front
We Will Win While Respecting Our Values