Written by Pedro Lasuen on 28. Nov 2021
Photographs by Gabriela Sabau, Emanuele Di Feliciantonio
Share
We can draw a handful of conclusions after the last day of the Abu Dhabi Grand Slam: Germany and Great Britain had marked the tournament in red and they were not wrong, there are many new faces pushing hard, Russia remains among the most powerful nations and Mongolia is building a fabulous team. 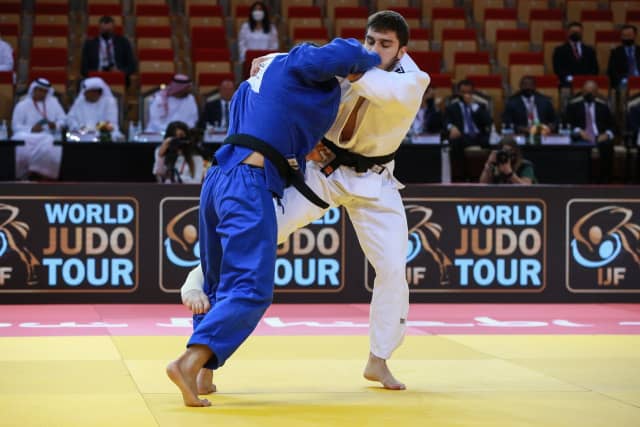 Russia’s Mansur Lorsanov had the merit of eliminating the first seed, Uzbek Davlat Bobonov and consolidating Russian dominance in the last tournament of the season. He did it in an unprecedented way, for the first time with poise, like wanting to say that he has come to stay. For his part, Tajikistan’s Kmoronshokh Ustopiriyon had not played for a medal since the dawn of time. At 28 it seemed that his limit was the first rounds, but in Abu Dhabi he managed to separate all his opponents and get into the fight for gold in his own right.

However, in the final he had two problems. The first was the excellent kumi-kata of the Russian who nullified his strategy, if he had one. The second was his own inaction, which earned him a hansoku-make and the truth is that it was a shame because it was his first final in 19 appearances in grand slams. For the Russian, gold was a triumphant entry into the world of the elderly.

“This is my first gold medal at a grand slam event and I am very excited about that,” said Lorsanov. 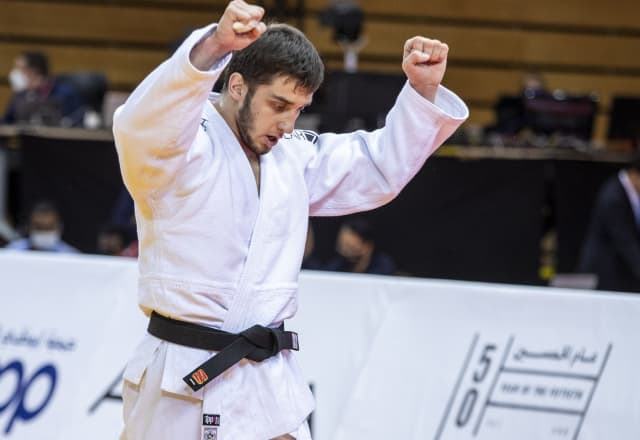 The first bronze was a matter between neighbours. Tayijistan Dzhakhongir Madzhidov and Kirgystan Erlan Sherov fought for a premiere on the World Judo Tour medal table. It was a dynamic match that was decided in a first golden score period, in line with the day before. Madzhidov won by hansoku-make and little more can be said, maybe that Tajikistan will have a warm winter with two medals in the closet. In fact there was one more but that one came at the very end.

The second bronze was a duel between eliminated favourite Bobonov and a semi-unknown 19 year old Frenchman, Francis Damier. He’s semi-unknown on the WJT but they say he has a lot of potential, as demonstrated by his junior European title. The Frenchman was soon penalised with shido. This is the WJT; you can't waste time. It is seen that the Frenchman has to mature because he is exposed to the potential for a launch at any time. 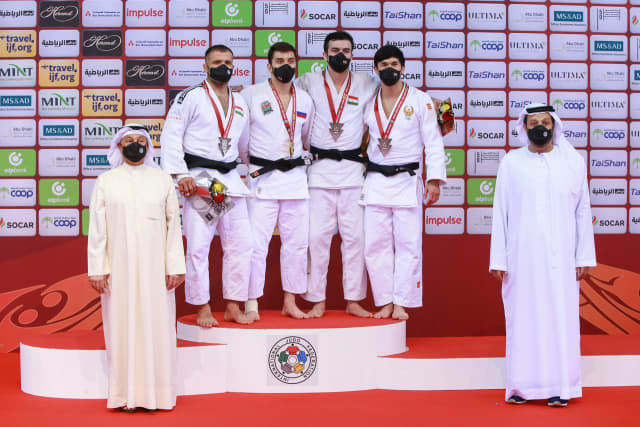 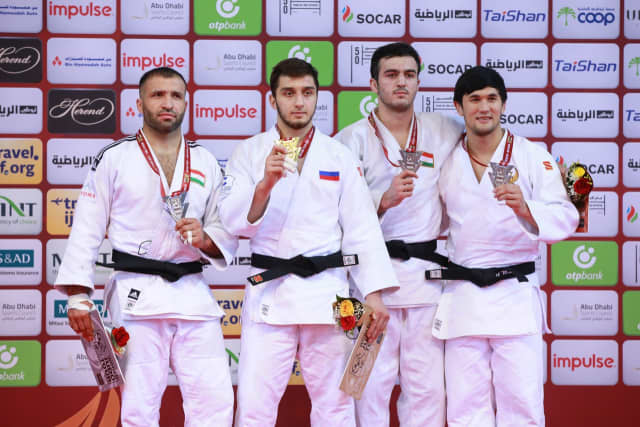 -78kg The Mark on the Calendar

Alina Boehm is in full transition between the junior environment and the world of the seniors. The German is part of that new generation that in this category has enormous firepower, with the world number one and current world champion Anna Maria Wagner and also Luise Malzahn. The same is true in Britain, where there is a new group of young women who are gaining ground and pushing back the old guard. To this point Natalie Powell was the best Brit at -78kg. In Abu Dhabi Emma Reid displaced her compatriot to contest the gold against Boehm. They are two judoka with similar styles, good technically and with Reid superior in ne-waza. In the golden score period Boehm attacked but the British reacted explosively, nullifying the counterattack with a movement that could be considered as ko-uchi-gari with an unorthodox grip, using a change of direction. We are sure of a few things: it was quick and nice and it was worth a gold medal for Reid and spoke to us right after the final. 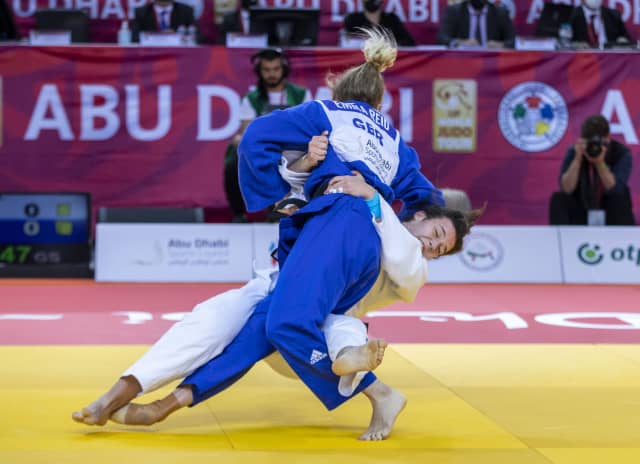 “I was nervous at the beginning, as I usually am before competitions, but today I felt more structured in my fights. I went through what we’ve been practising at home and that hard work gave me the confidence to go all the way.” 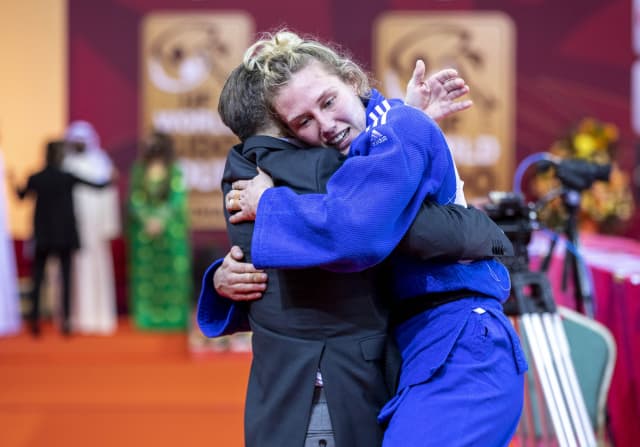 Natalie Powell imposed the hierarchy against Ukrainian Anastasyia Turchyn, with an excellent change of direction that ended in a sasae-tsuri-komi-ashi that made a lot of noise and that meant one more bronze for Great Britain.

Inbar Lanir was in a hurry to get home. 30 seconds was all that was needed against Slovenia’s Patricija Brolih; waza-ari first and osae-komi in the continuation of the action. It was clean and forceful and brought a bronze for Israel. 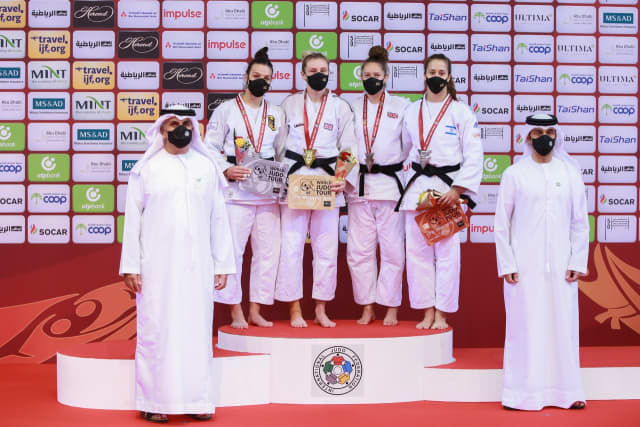 Medals, checks and flowers were presented by HE Aref Alawani, General Secretary of the Abu Dhabi Sport Council and Mr Khalid Eisa Almidfa, Assistant Secretary General of the UAE General Authority of Sport 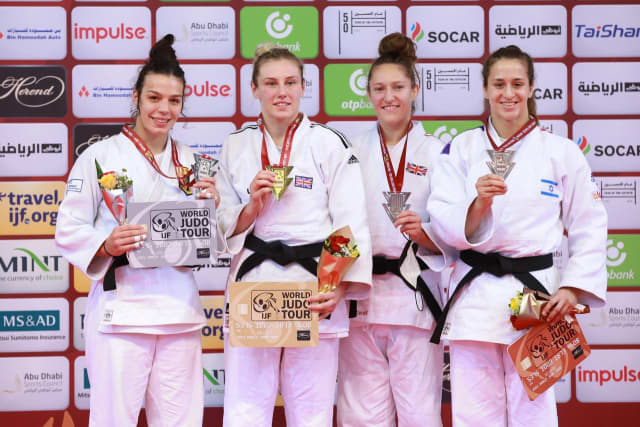 When the Russians want to be, they can be relentless. Arman Adamian and Matvey Kanikovskiy neutralised an entire battalion of elite troops in the always tricky –100kg category. It is true that Adamian was the favourite, but it is no less true that he had to face Belgian Toma Nikiforov, who has been on the rise since he recovered from a serious injury. Nikiforov may be fearsome, but today Adamian is out of Nikiforov’s reach. A special mention for Kanikovskiy because he got rid of the French Alezandre Iddir, the Dutch Michael Korrel and the Canadian Shady Elnahas, that is, the past, present and future of judo. None of them could stop the Russian. 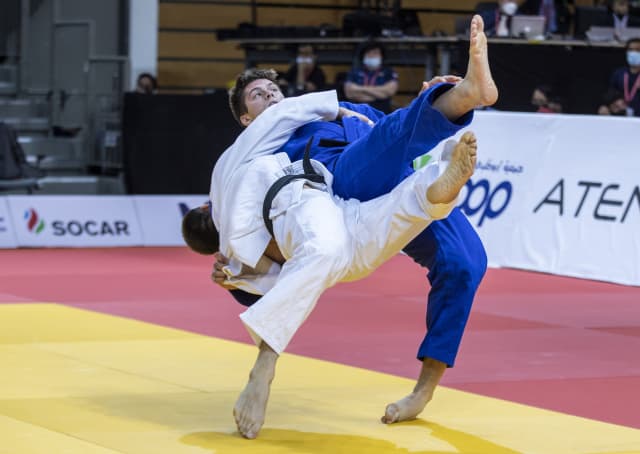 Adamian dominated and baby-faced Kanikovskiy fought back until he couldn't take it anymore and suffered in his flesh that which began as ko-soto-gake and ended as ura-nage. Adamian ends the year with three consecutive victories, in Zagreb, Paris and Abu Dhabi and the leadership of the category. He is only 24 years old and he is already a prodigious judoka. 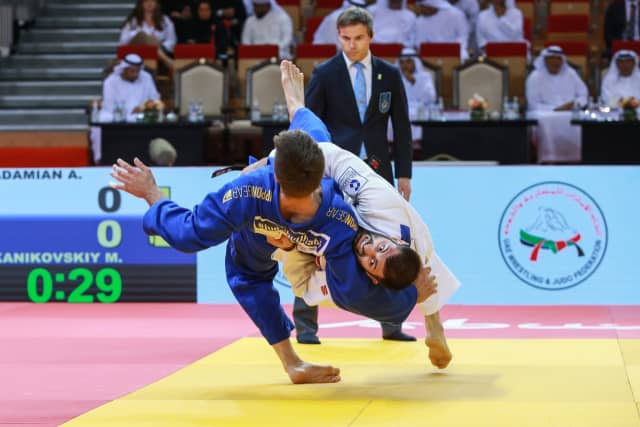 “I had to win this medal. I couldn’t take part in the Olympics and I had to prove that I should continue towards the next Games. I won the last three tournaments I took part in and I will work hard to be in Paris in 2024,” declared Adamian. 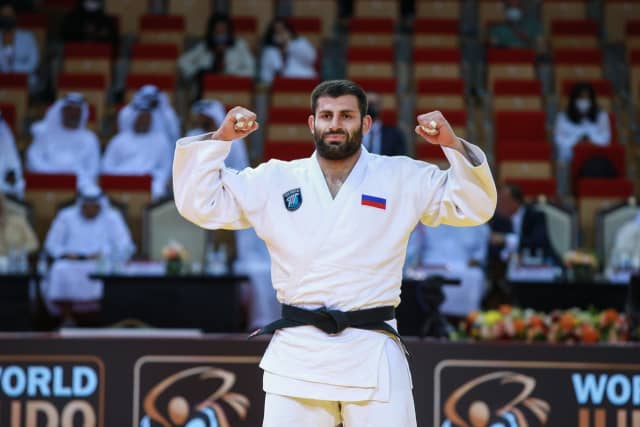 More was expected of Shady Elnahas in Baku, where he finished second and much more in Abu Dhabi, because he has judo to spare and because he himself declared that he wants to overcome Fonseca, Adamian, Paltchik and Liparteliani. He will have to wait and improve because he does not yet have the level required for the great occasions against the best. In Abu Dhabi he fought for the bronze against the German Falk Petersilka and Elnahas took the lead because in absolute terms he is better. Still they reached golden score where the Canadian successfully executed uchi-mata.

Then two old acquaintances appeared, Korrel and Nikiforov for the second bronze, as if it were a vintage combat; these two have been on the WJT for a decade. It could have been the final but that's how judo is and the years don't go by in vain. Korrel is the current European champion and started as a favourite. There was no surprise and the Dutchman scored twice for waza-ari with the same technique, seoi-nage. 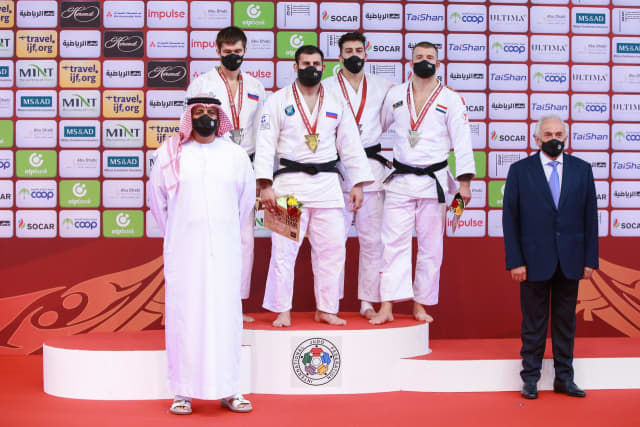 Medals, checks and flowers were presented by HE Eissa Hilal, Chairman of Sharjah Sport Council and Mr Vasily Anisimov, International Judo Federation Ambassador and President of the Judo Federation of Russia 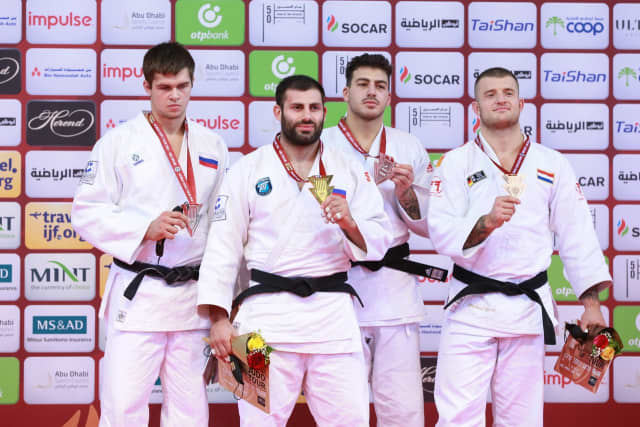 Beatriz Souza did her job in Abu Dhabi. First seed and world number 1, the Brazilian qualified for the final hardly breaking a sweat. Despite her youth, just 23 years old, she is used to great challenges and she has reaped good results, many medals and has never dropped below seventh place in the last two years. She is consistent and regular in a sport that does not forgive mistakes. In the final she faced the heaviest judoka on the circuit, the young Frenchwoman Léa Fontaine. Despite her size, Fontaine is capable of producing high quality judo, which has allowed her to win silver at the Paris Grand Slam and return to fight for gold a month later. 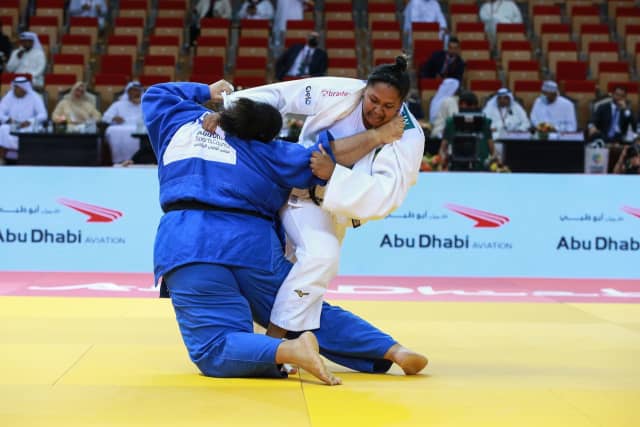 In less than a minute Souza scored waza-ari with soto-maki-komi, taking advantage of a Fontaine error and from there she dedicated herself to controlling the fight with very strong kumi-kata. It's called experience and the result was a gold medal, her first in a grand slam and Souza's third win against Fontaine in their three head-to-heads. 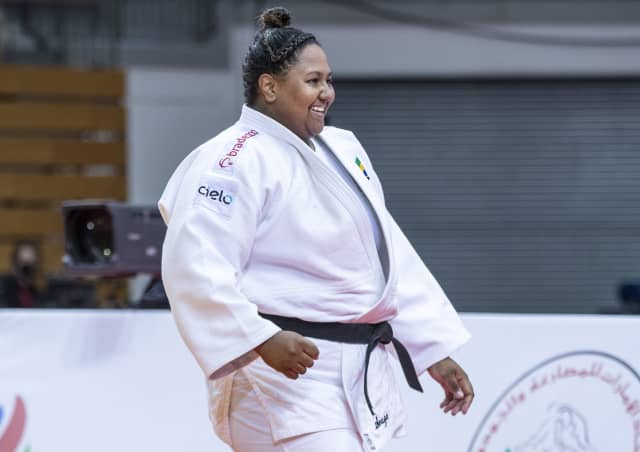 Anzhela Gasparian and Raz Hershko are light heavyweights and battled for bronze. Hershko ended the year like a rocket, winning gold in Paris and bronze in Baku. For Gasparian it was a new experience. She was not daunted but she fell because Hershko was more intelligent with the te-waza and a change of direction.

French and junior world champion Coralie Hayme was not the favourite in front of Adiyasuren Amarsaikhan, one of the jewels of the new Mongolian quarry, who already presented her credentials in Baku with a silver medal. Hayme let the hurricane pass and with thirty seconds to go she produced a seoi-nage out of nowhere. Bronze for the French but from what we have seen these two will meet often over the next few years. 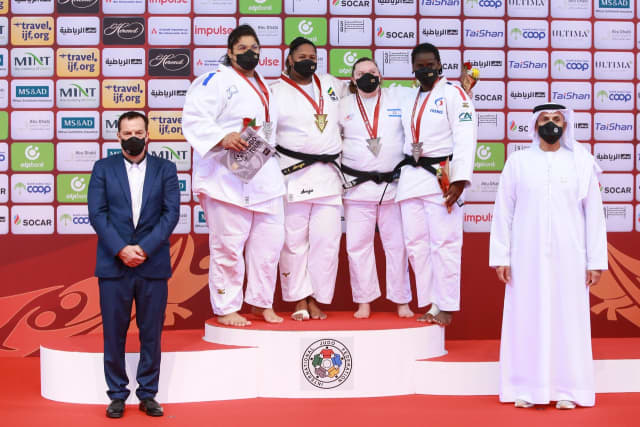 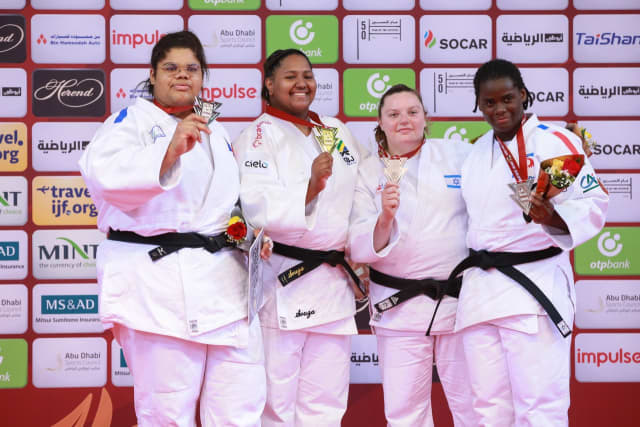 Quietly, slowly but surely, Mongolia is building a team that in the coming years may be fearsome. It is one of the countries that is fortunate to have both men and women and is presenting its new pearls in society. We already know Tsogtbaatar Tsend-Ochir, whose career at –73kg is becoming meteoric, with two world medals and one Olympic medal, in addition to his brand-new lead in the category. Now Mongolia also has a heavyweight, Tsetsentsengel Odkhuu. He is the latest product of a delegation that has managed to combine youth and seniority with wisdom. It is a country that also has Saeid Mollaei. 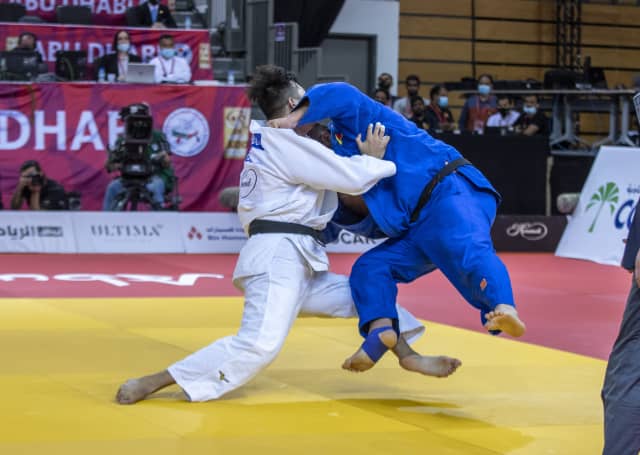 In his first final on the world judo tour Odkhuu measured his strength with the Romanian Vladut Simionescu. There was an obvious size difference and nine years between the two. Odkhuu couldn't move Simionescu, who wasn't doing much either. They seemed to go straight to golden score but within thirty seconds Odkhuu entered a new dimension with a ko-soto-gake that was heard even in Ulaanbaatar. Let everyone know, Mongolia now has a heavyweight. 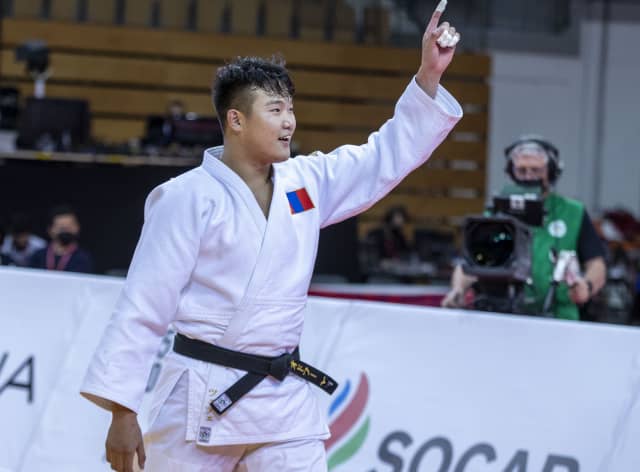 Temur Rakhimov was the third Tajik of the day wanting to touch a medal. Valeriy Endovitskiy was the fourth for Russia. At first they bored everyone with two shidos each in two minutes of combat. It was like getting whipped and they both started practising judo. Rakhimov won in golden score by ippon with uchi-mata and crystallised an historic day for Tajikistan.

Marc Deschenes increased Canada's locker with the bronze for a non-appearance by the Ukrainian Yevheniy Balyevskyy. 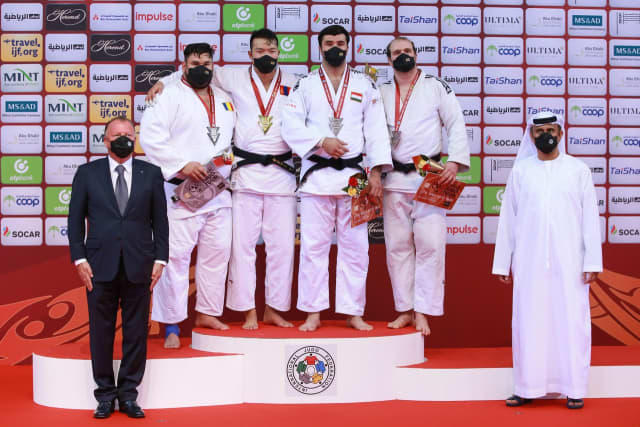 Medals, checks and flowers were presented by Mr Marius Vizer, President of the International Judo President and HE Mohamed Bin Thaeloub Alderee, Chairman of the UAE Wrestling and Judo Federation 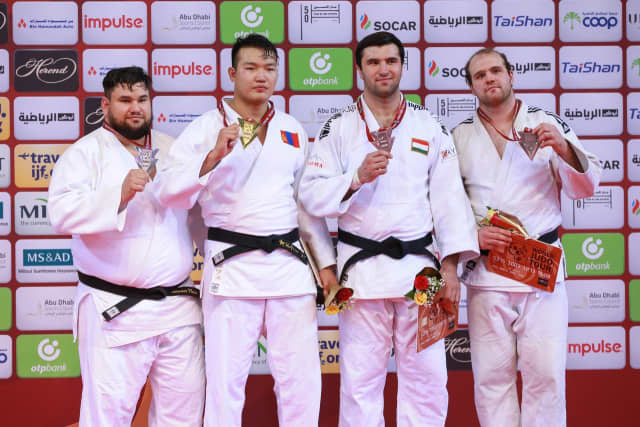 This is when people usually get up and leave. We do not because we have a last surprise, a well-deserved tribute. HE Mohamed Bin Thaeloub Alderee, Chairman of the UAE Wrestling and Judo Federation, received the Herend vase from Mr Vizer for his dedication to the development of judo. 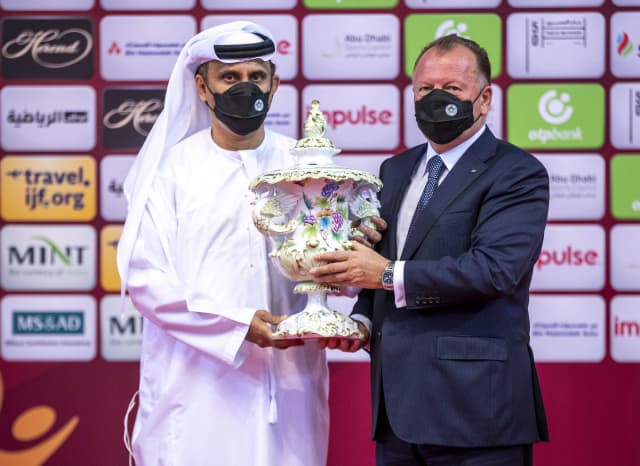 HE Mohamed Bin Thaeloub Alderee, Chairman of the UAE Wrestling and Judo Federation and Mr Marius Vizer, President of the International Judo Federation

So Russia finished first in the medal table with two golds, the same as Great Britain. France, Germany and Mongolia followed. Here we say goodbye to the World Judo Tour until next year and we already miss it. It has been our refuge and our pride in this difficult year. That is why we want more and very soon. See you in 2022.